“Michał Kwiatkowski sent me a photo in January from Poland of his Garmin showing -8 C and he said he was totally fine just wearing one thermal base layer underneath,” explained Soren Jensen, global marketing director at Castelli. The piece Kwiatkowski was wearing was the Alpha Rain or Shine jacket.

While cyclists are used to layering up for a ride when the mercury plummets or rain is in the forecast, Castelli thinks you shouldn’t have to. It may look like a simple jacket, but the Castelli Alpha Rain or Shine is much more. The company wants you to reach for the Alpha in the biting cold whether the forecast calls for, clear skies or precipitation. The jacket can also handle variable temperatures allowing you to regulate your body heat. The Alpha RoS jacket is for riding in sub-zero temperatures while the lighter Alpha RoS jersey is for cool days. Castelli says the jersey will be the warmest in your closet while the jacket will be the lightest.

RELATED: The weird and wonderful come to life in Sportful’s R & D collection

“It started out just as a jacket. The idea was to use a light Gore Windstopper fabric, which provides wind protection and keeps you dry. Inside, there is a thermal insert sowed into the jacket to allow you to open it up when it warms up or you are climbing,” explained Jensen. “People can ride with one single base layer and not need a thicker thermal layer that will just soak up more moisture.” 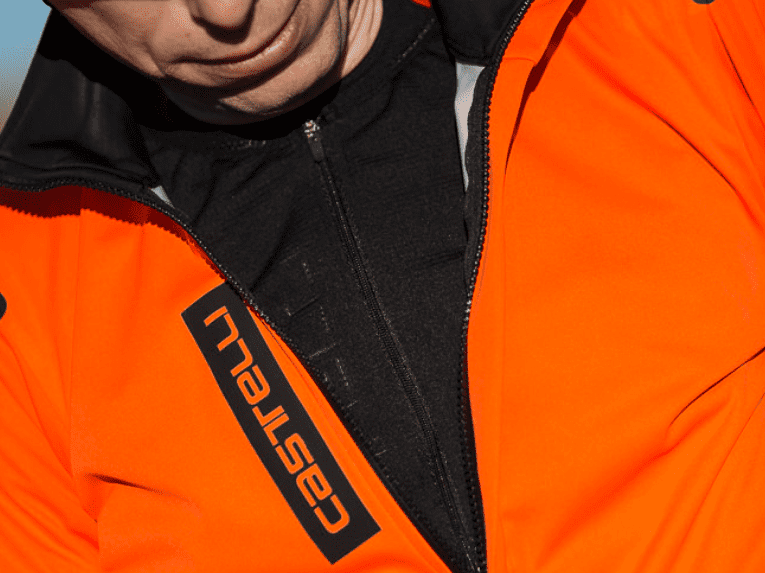 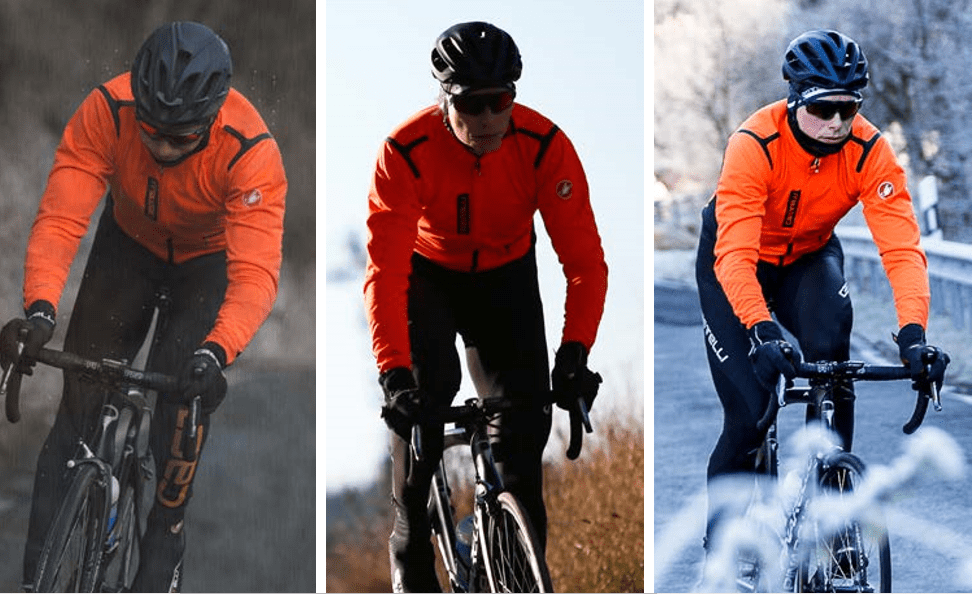 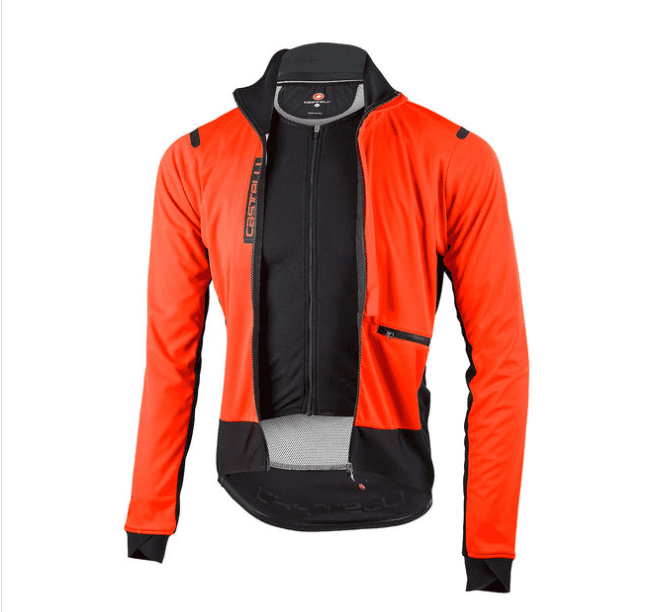 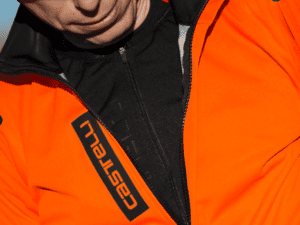 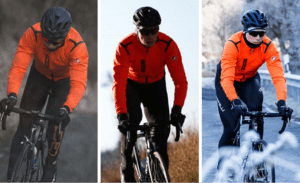 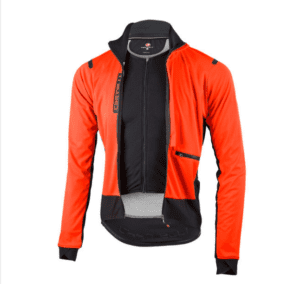 The Alpha RoS jacket was tested by Team Sky’s riders, who live and train in some challenging conditions. German domestique Christian Knees and one-day race specialist Kwiatkowski were two of the first riders to don the new jacket during the 2016-2017 off-season in their cold home countries. Italian sprinter Elia Viviani, Pole Michał Gołaś and Brit Philip Deignan who calls Monaco home also received early prototypes, using them during the year’s coldest months on their respective home roads.

“They helped make the whole combo perfect,” Jensen said about working with Sky’s riders. Castelli gave the team 64 product models at the beginning of 2017 when the partnership began. “We have nine new products we are testing with them. One is the aero suit that was used at the Tour de France. We had never really given the team in-line products in terms of winter jackets.”

Cyclists want to carry as little with them on their rides. Most cycling clothing has a fairly narrow temperature range. If riders face variable conditions, they either need to make compromises with their choices of apparel or they need to carry too much, stuffing vests, rain jackets or windbreakers into back pockets.

The Alpha’s windproof and water-resistant properties, cold-weather protection and versatility allowed the demanding professionals to simplify their winter outfits. The jacket has ventilation slits on the back to let a bit of extra air pass through the water-resistant Gore fabric. 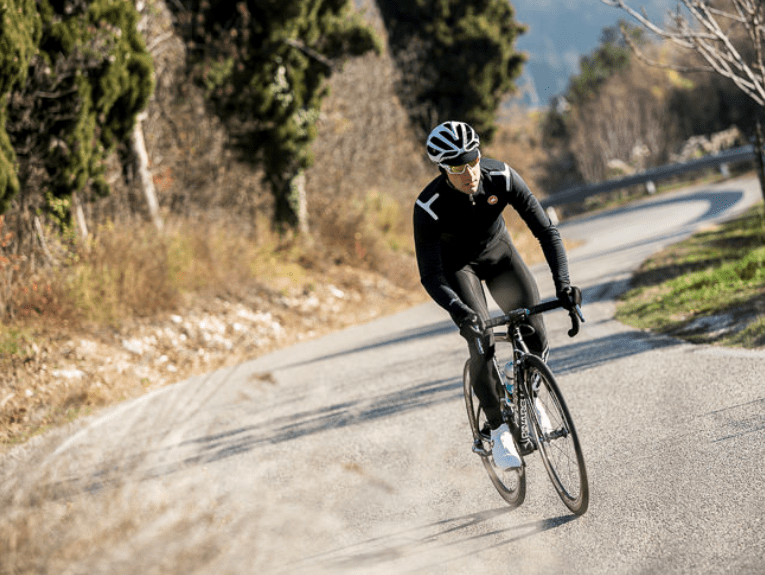 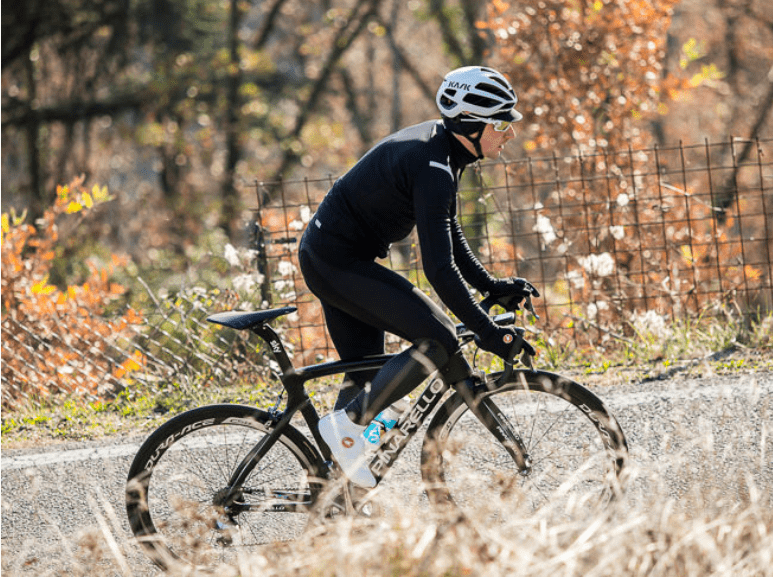 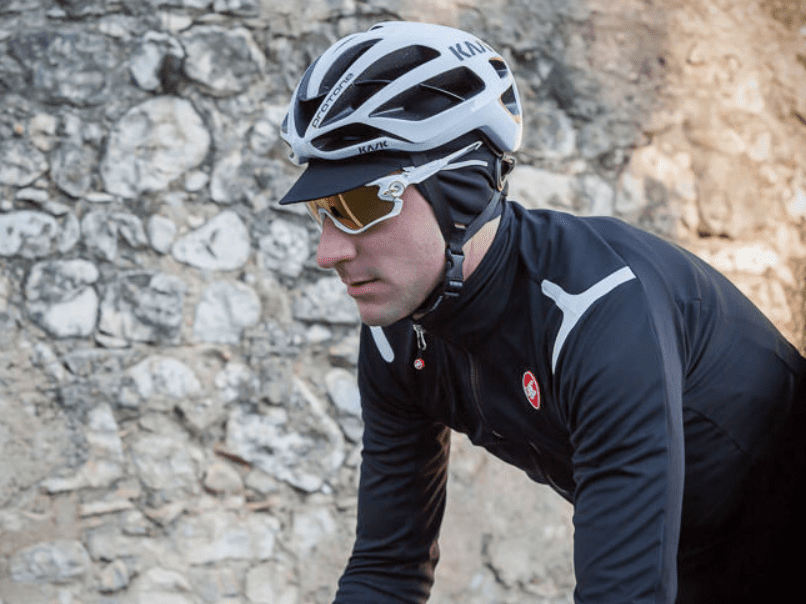 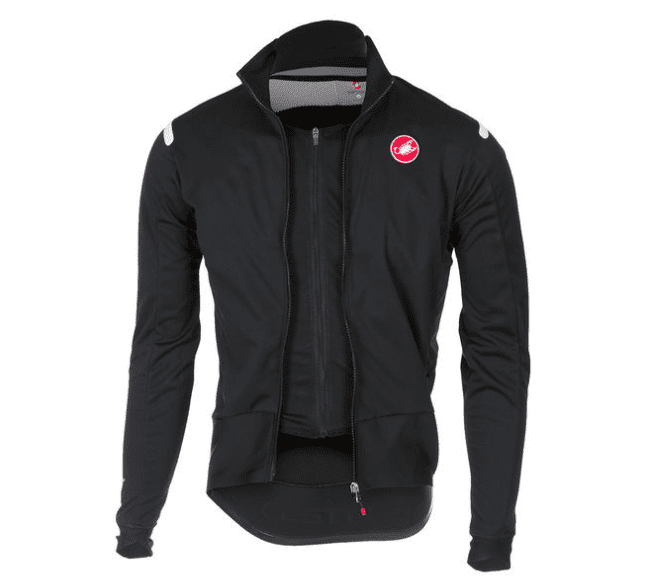 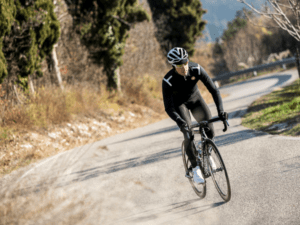 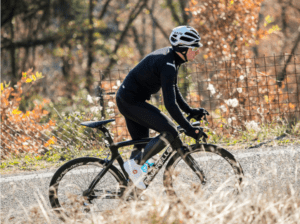 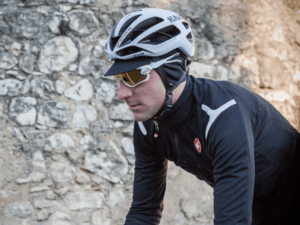 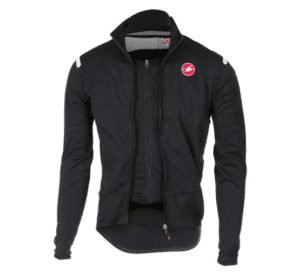 Like the jacket, the lighter weight jersey uses Gore Windstopper on the front. The back is Nano Flex Xtra Dry fabric thatallows for more ventilation on warmer days while still offering protection against the rain. “The whole top part is Nano Flex fleece, which is treated for rain. The whole idea of the seam seals on the shoulders is to keep out water,” Jensen explained about the details that give the Alpha its dry- and wet-weather versatility.

Castelli’s headquarters is in Fonzaso, Italy at the edge of the Dolomites. As such, the team at the Italian apparel company can head out into the mountains the moment a prototype is stitched in the factory. The Alpha was taken on such trips, which helped to refine a number of key details.

“One of the things was getting the fit right. The Alpha has an elastic raw edge back and it needed to sit right on the body,” Jensen said. “The sleeve endings, with the cross wrap, needed to be changed a little bit to make the jacket easy to get on and off.”

Castelli built off of existing products when developing the Alpha jacket and jersey. The jacket was first seen in 2014 and the jersey made its debut in the winter 2015 collection. Neither boasted the water protection that the new models feature.

RELATED: What we are wearing this fall: Sportful Fiandre Norain short sleeve and bib short

Castelli has a large collection of pieces to build off of. Each year the Italian company refines its lineup making additions that help you extend your season and better enjoy every ride. The range of protection offered by the Gabba, Perfetto and now the Alpha helps riders rely on single pieces in the face of variable weather and temperature fluctuations.