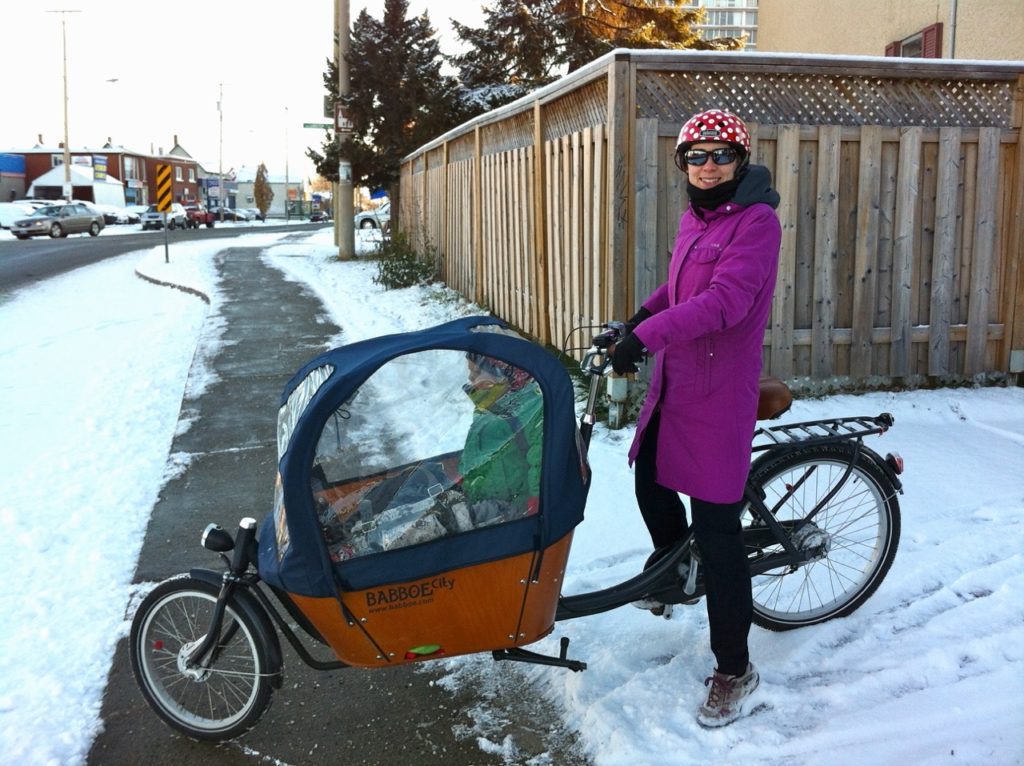 When city planners think about urban cyclists, they think about commuters and Lana Stewart says that is reflected in the way the infrastructure in urban areas is often built. Stewart is a communications specialist who works in the field of web development. She has been commuting with her eight-year-old son now for six winters and will be presenting at the Winter Cycling Congress in Montreal this week. Stewart says that a focus on commuting means that a lot of potential bike trips are being overlooked as a result.

“There are different ways we can work cycling into our lifestyle,” Stewart explains. Trips on two wheels to the grocery store, restaurants, the corner store, the dentist office, the pharmacy, the coffee shop, your kid’s daycare or recreational activities need to be taken into consideration when having conversation about the role of cycling in urban areas. City planners are thinking of cyclists as too one-dimensional and Stewart wants to encourage people work in city marketing and communications to focus on the message that the goal is to build practical cities.

RELATED: Train in the cold

“It’s about normalizing these other destinations,” she says. “We talk about commuting a lot so people don’t have a mindset that you can use it for more than just going to work.”

The problem she sees is that the winter cycling network in Ottawa, where she lives, supports only the commute but doesn’t make it easy to get to these other destinations. “The real opportunity is to promote short trips. Everyday errands that are low commitment where no special clothes or bike are required even in winter. It’s about normalizing these other destinations.”

Stewart says another problem is the sometimes tense relationship between drivers and cyclist, the mentality of us versus them. She says she’d like to see more efforts by organizations and cities to put a human face on the activity. For example telling stories about why people choose to bike and how it can be useful in people’s day-to-day lives.

As Canadian cities try to get more people on bikes they need to take into consideration these shorter trips to non-commute destinations that appeal to a wider range of people. Bike networks need to include main streets where people making shorter trips travel. A big part of the problem Stewart says is that there are gaps in bike lanes. “We don’t have a seamless network. Cities are getting better with more segregated lanes but we still have missing links and it only takes one missing link in your route for someone to decide not to bike,” she explains.

Protected bike lanes that are maintained are even more important in winter because riders have fewer options when figuring out their route. Instead of choosing a quieter side street to avoid a busy main artery, during the winter a lot of those roads are not as well cleared meaning that with the freezing and thawing they can be hard to navigate during the winter.

Infrastructure that serves more purposes than the commute and is seamless could play a big part in making Stewart more confident as her son grows up and the prospect of him riding to school becomes closer to reality. For parents who want to begin to introduce their children to cycling, she says the best way is to give them this exposure starting at a young age.

“We are going in the right direction but I still won’t be able to send my son off cycling to school anytime soon,” Stewart says.