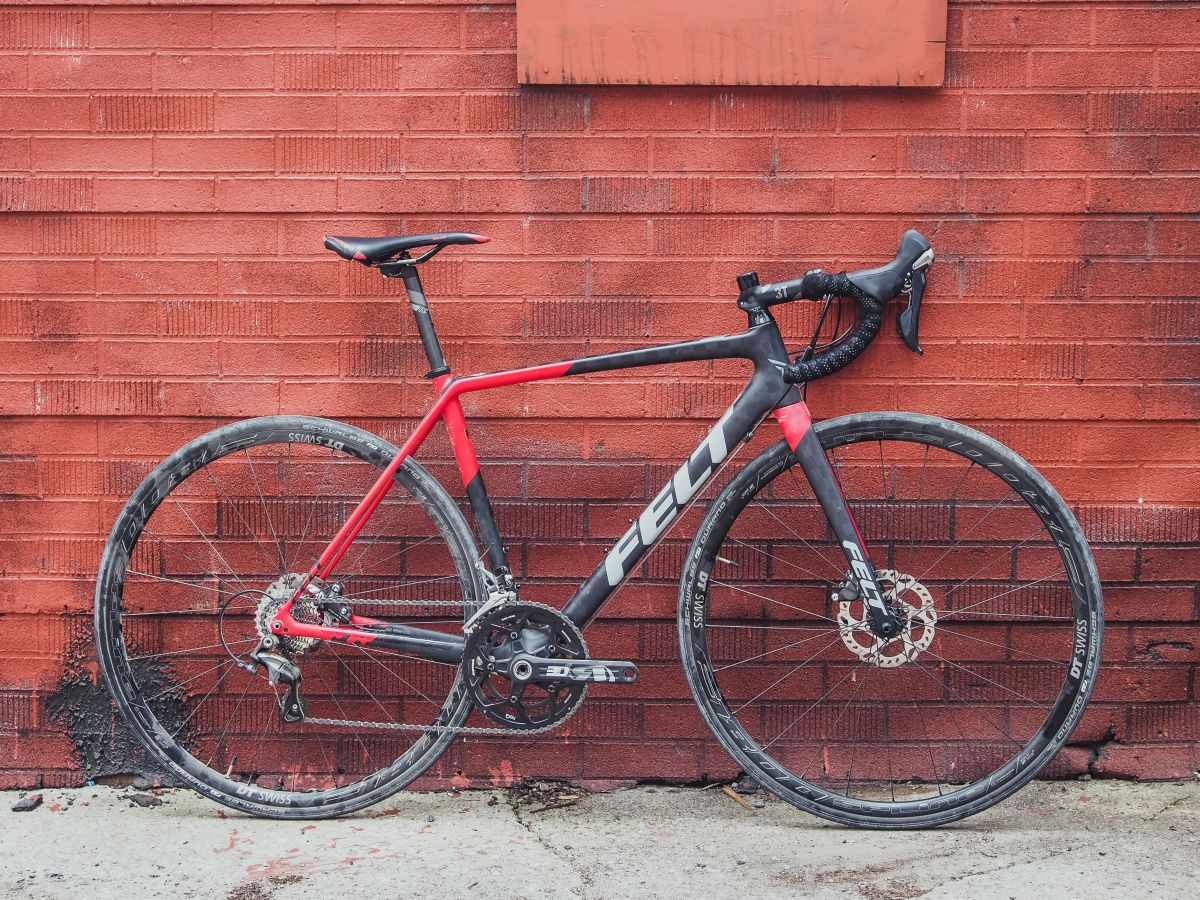 I thought we were just going for a 130-km road ride. It ended up being more than that after we turned down a steep, freshly graded gravel descent. The Felt fr3 Disc was prepared. Some say riding gravel is more fun when you don’t quite have the right tool for the job. A road frame with 25-mm-wide tires wouldn’t be my first choice, but paired with Shimano Br685 hydraulic brakes, I navigated the challenging surface with confidence.

The FR3 isn’t just for adventure riding. In fact, it’s a race-ready frameset with a lightweight design that’ll help you get up the climbs, too. The frame is made from the same UHC Advanced + TeXtreme carbon fibre as the top-end FR1. It’s a stiff layup that ensures every pedal stroke put through the Rotor 3D30 crankset is turned into speed on the road.

After the gravel descent, we hit rolling hills. For half of the ride, we drove into a stiff headwind toward our designated lunch spot. The frame’s geometry has been slackened compared with the F series, the FR’s predecessor raced by the likes of Marcel Kittel and Tom Dumoulin. The fr3 has a taller head tube to offer a bit more comfort, but with a slightly longer stem it be set up for a racer looking for an aggressive position. The geometry certainly didn’t stop me from getting into a nice position to drive the pace into the wind.

Comfort and versatility are increasingly emphasised when companies present their road frames. The fr3’s thin seatstays ensure that throughout long distances and over rough roads, the bike doesn’t feel harsh. With the disc brakes, I rode with confidence in wet and gritty conditions; I was never hesitant to take the bike down an unexplored or lesser-known road. The DT Swiss wheels are also comfortable. But, if you are looking for extra speed or to shed a few grams, you could start with new hoops.

Handling gear changes by the Ultegra derailleurs are the Shimano rS685 shifters. While slightly bulky in the hands, they get the job done with the reliability and precision you expect from Shimano’s second-tier group. The fr3 has external cable routing for mechanical-shifting systems. It’s a setup that you’re seeing less and less, but is great if you work on your own bike. A Di2 group has its wires routed internally.

RELATED: There is a Fabric Scoop saddle for every behind

After lunch, we headed back toward the cars. On the hills, when I got out of the saddle, the fr3’s climbing prowess was apparent. Our final challenge was yet another unannounced gravel road. This one led out of the valley we had descended into earlier. Thankfully, the road hadn’t been recently graded but it still presented a challenge with steep pitches and sections on which keeping traction was tough. With tired legs, we started pedalling up. While it could have been an agonizing grind to the top, the fr3 made it fun.

The bike is great when you find yourself on new roads. It seems to encourage you to tackle challenges you might otherwise bypass. While it wouldn’t be out of place on a start line, it is thoroughly enjoyable for long explorations on two wheels.