After three years in development, Giant’s new aero road platform the 2018 Propel has arrived. The bike was first spotted at the Tour de France under multiple stage and green jersey winner Michael Matthews of Team Sunweb.

Over the weekend, Giant unveiled their new aero disc road bike in Nevers, France. It’s the models first major overhaul since the original Propel was launched back in 2013. The bike has been built around disc brakes with Giant seeking to improve the aerodynamics, control and efficiency of the original Propel. The result is a bike with a new frame geometry, new tube shaping, updated wheels and cockpit, equipped with Shimano’s new disc groupsets.

One of the biggest and most noticeable changes to the new Propel is the whole 2018 lineup will come disc equipped. The full range runs from Dura-Ace Di2 to mechanical Shimano Ultegra with flat mount hydraulic discs on each. While a disc model was inevitable, going disc only is quite the risk to take for Giant seeing as many riders still prefer traditional rim braking. Giant however is confident through their wind tunnel and real world testing that disc was the way to go.

The brake calipers are neatly tucked behind the fork allowing the air flow to first be broken by the wheels and fork before hitting the relatively cumbersome brake caliper. Aerodynamics were always in mind during the bikes development.

The 2018 Propel will come equipped with 140 mm rotors which they say provides plenty of stopping power for the road. This is another interesting decision seeing as the UCI settled on a 160 mm rotor standard for Mavic neutral support at the 2017 Tour de France. 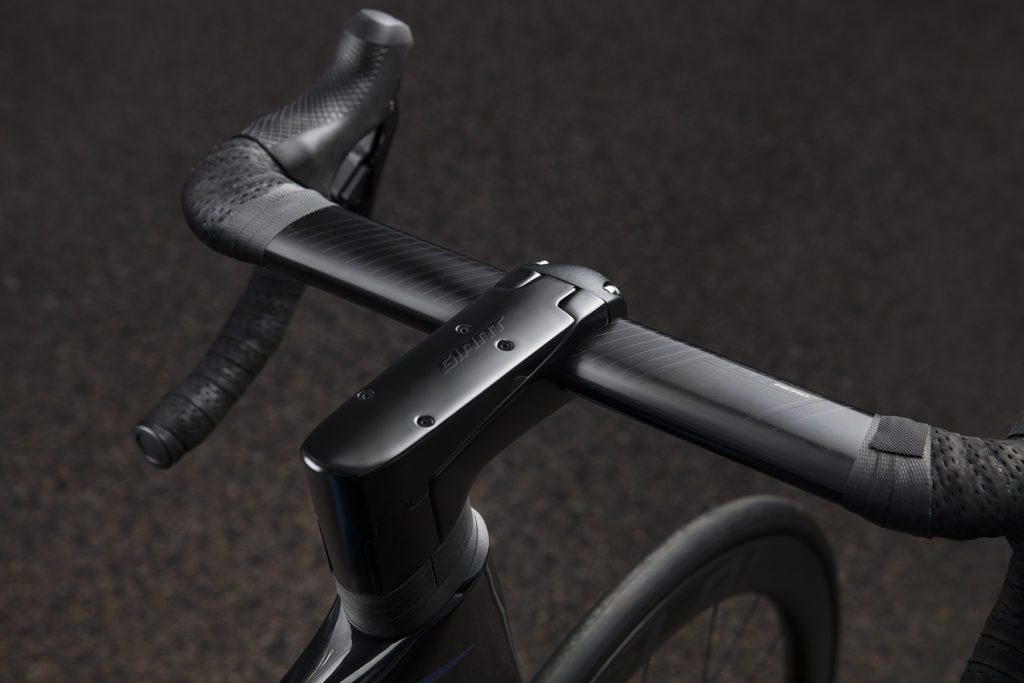 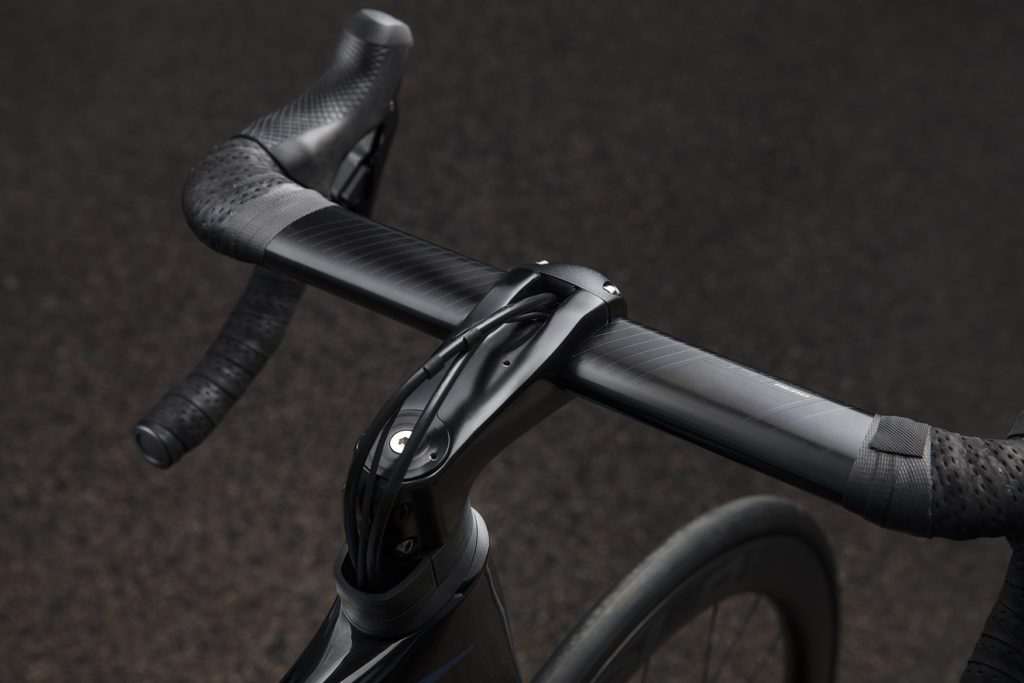 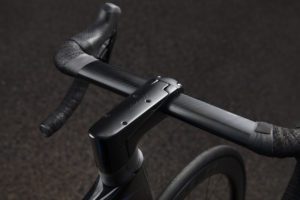 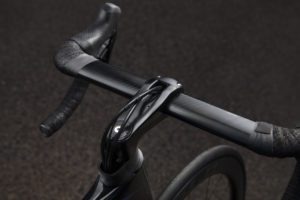 The 2018 Propel has a very clean look with not a cable in sight. With a two piece design that is both aero and mechanic friendly, the Propel’s stem and handlebar are integrated allowing all the cables to be routed internally through the bar, stem and then behind the steer tube before entering the back of the head tube. The exception is on the mechanical Shimano Ultegra equipped Advanced Disc where the cable briefly exits the handle bar on it’s way into the stem. The two piece design makes it easier to pick the right handlebar width and stem length. It also makes for an easier setup.

Giant’s commitment to aero continues through the wheels they’ve equipped it with. Through wind tunnel testing, Giant decided going with a 42 mm deep front wheel and a 65 mm deep rear wheel was the best combination to improve aerodynamics while maintaining control for the rider in both a head and cross wind. This creates an interesting look to the profile of the bike that we quite like.

In a fairly bold move for 2018 standards, Giant has decided to sell the 2018 Propel Disc models as tubeless. Instead of offering wheels with tape in case you want to change your setup, Giant is shipping these wheels fully tapped and with a bottle of sealant for the shop to fill before purchase. Giant’s near future plans including shipping all bikes from commuters through to high performance road models as tubeless.

Giant believes that reliability and convenience is fully within a tubeless wheel sets capabilities. Giant has also committed to educating it’s consumers about the upkeep of a tubeless wheel set. Once registered online, Giant will send you emails and push notifications to let you know when sealant should be topped up and replaced. They will also release of series of education videos.

Tubeless technology has been steadily gathering momentum with road cyclists. They provide a faster setup without the need for an inner tube, they have lower rolling resistance since there is no friction between the tube and the tyre and they can be run at a lower pressure for more comfort and traction while eliminating the possibility of pinch flats. Tyres that are filled with liquid sealant—which plugs small holes in the tire—often prevent the tire from going completely flat. In the case of a puncture, a standard inner tube can be inserted. While they haven’t been fully adopted despite their advantages, the commitment by Giant will surely see more riders adopt or at least try out the technology. 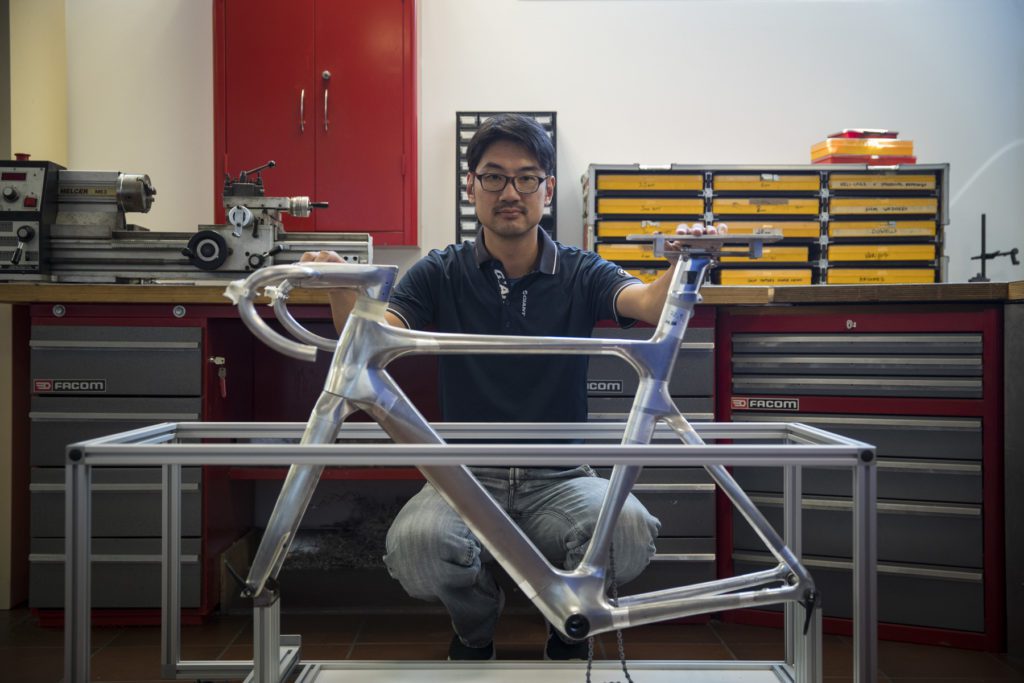 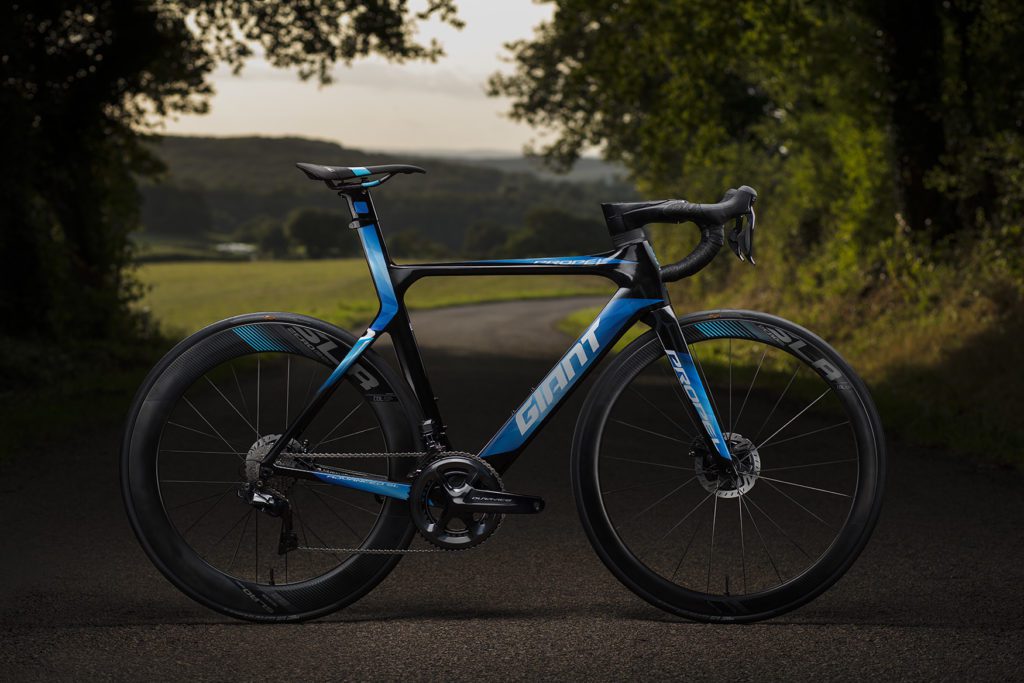 Clean lines on the new Propel 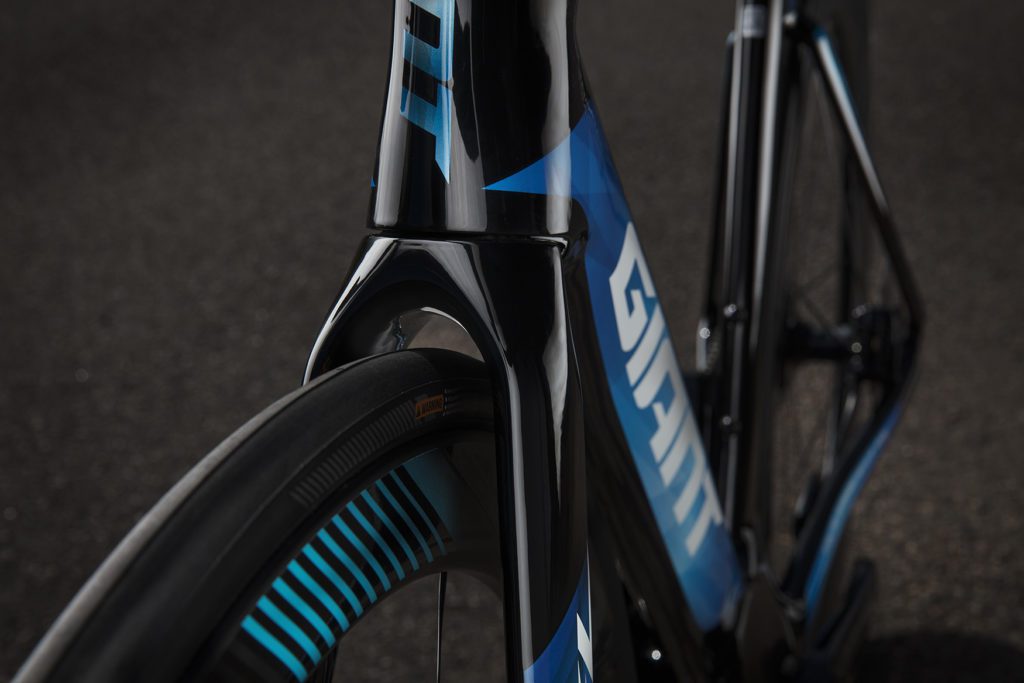 Giant used what they call AeroSystem Shaping Technology on the new frame. 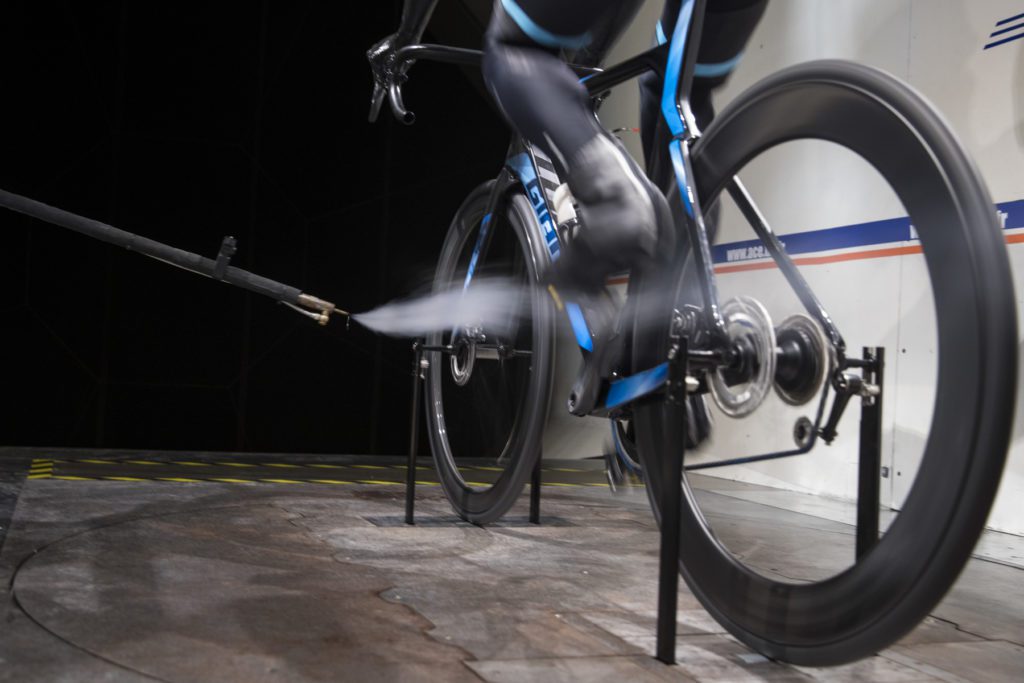 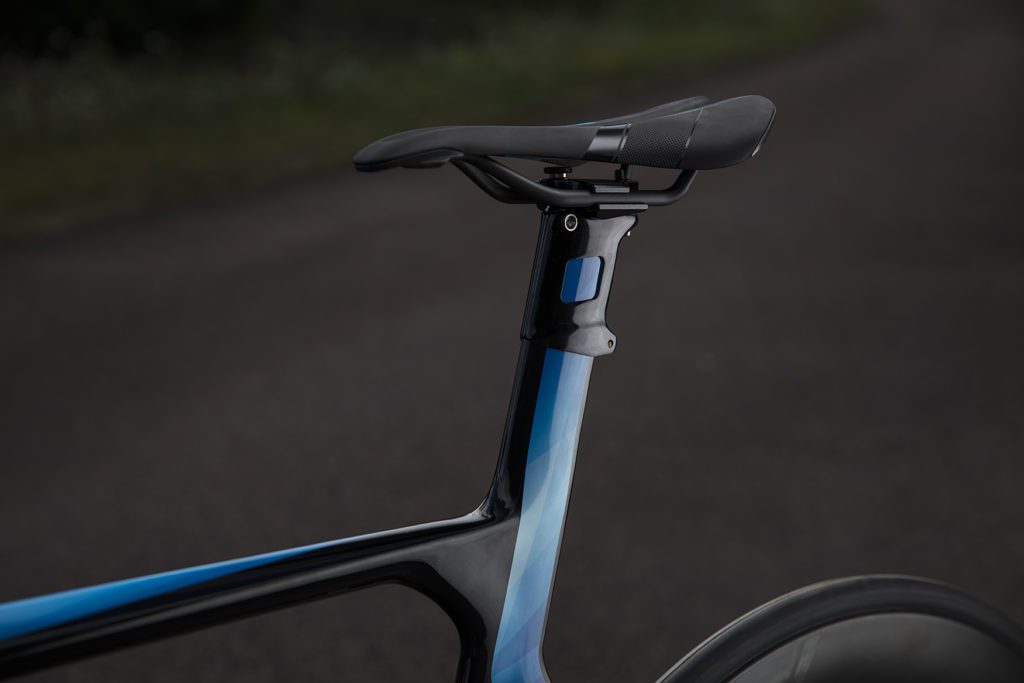 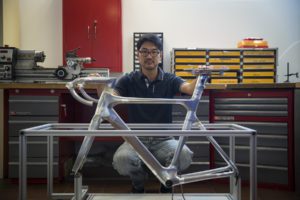 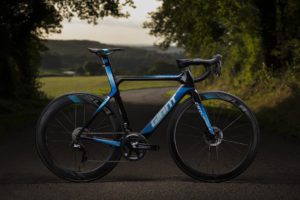 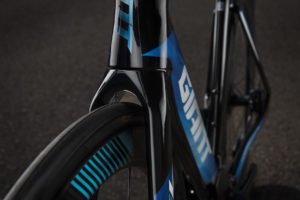 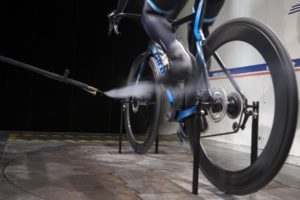 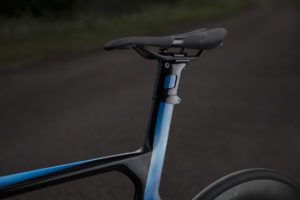 A big change to the new Propel are the tube shapes. Compared to the tear drop shaped tubes previously found on the Propel, the 2018 Propel feature truncated ellipse airfoil shaped tubes similar to those found on other top-end aero bikes. The shaping and sizing of key parts of the frame was designed to help the Propel perform well in all wind conditions not just a head on wind. The truncated ellipse shape is found on the stem spacers, fork blades, downtube and seattube.

The tubing shape also allows the frame to be significantly stiffer than the previous generation resulting in a livelier ride quality and explosive accelerations. Giant claims the Propel (982 g) has a lighter frame weight than competitors Trek Madone (1253 g) and Specialized Venge disk (1157 g) bikes.

Canadian Cycling Magazine was on hands in Nevers, France this past week to get an introduction to the 2018 lineup and have a chance to go take the new top end Propel SL Disc 0 for a ride.

First up was a ride near Giant’s wind tunnel at the Magny-Cours racing track, a former F1 race track that was hosting European Porche week as well as the Giant 2018 Propel media launch. After seeing, hearing and feeling race cars push 250+ km/h around the track, it was time to hit the track on a vehicle with a slightly less powerful engine. The race track allowed for a very controlled environment to test the 2018 Propel featuring sweeping turns, tight corners, S bends, gentle uphills and downhill.

The girst thing I noticed was a much stiffer bar setup and frame design when compared to the previous model of Propel. Stand up out of the saddle bars on the drops and you can feel every bit of energy go back into the bike, nothing is wasted. Tipping into corners on a descent and you feel the bike push back allowing for faster speeds and tighter cornering.

On a 80 km ride through the French countryside that included rolling hills, punchy climbs, long fast descents and some exposed roads the full capabilities of the Propel SL Disc 0 were apparent.

While pushing on a climb in the saddle I was very impressed with the bikes ability to perform much like a lighter more climbing focused road bike such as Giant’s TCR model. On descents with rather bumpy tarmac, terrain not ideal for a stiff aero road bike, the Propel held its line extremely well allowing me to take turns under full control while keeping my arms and upper body impressively relaxed. My upper body did not tire on the demanding ride. This came as a bit of a surprise considering this bike is designed for winning sprints where any absorbed shock is seen as a loss in power. Impressive work by Giant here to provide benefits of an aero road bike while somehow not compromising on rider comfort and control.

The performance of the disc brakes made me a very happy rider with the increased ability to push a little hard on the descents due to my confidence in my ability to scrub speed with ease thanks to the new Dura Ace hydraulic disc sets. Compared to my personal road bike equipped with carbon rim brakes, I was able to push the Propel Disk SL 0 harder and faster into turns, something I took full advantage of during the few hours of saddle time on the bike. Giant may have finally converted me to disk brakes.

While many aero road bikes can be a challenge to control in a crosswind, the Propel felt nicely grounded and I always felt in control even in unexpected gusts. The wheel set combination of 42 mm and 65 mm was a noticeable benefit in these conditions where I benefited from the increased aero performance while always staying well in control.

The tubeless wheels were tough to judge on performance but one media member did experience a puncture however the sealant instantly filled the small puncture and the rider lost almost minimal air pressure. Even the next day the tire had not lost any noticeable pressure which speaks volumes towards Giant’s new approach to wheel and tire standards.

Riding the 2018 Propel was an excellent overall experience. Giant made improvements in the bikes performance, aerodynamics, and through the addition of disc brakes and a new geometry, provide the rider with predictable and pleasing control. The 2018 Propel is a timely update to an already great bike. 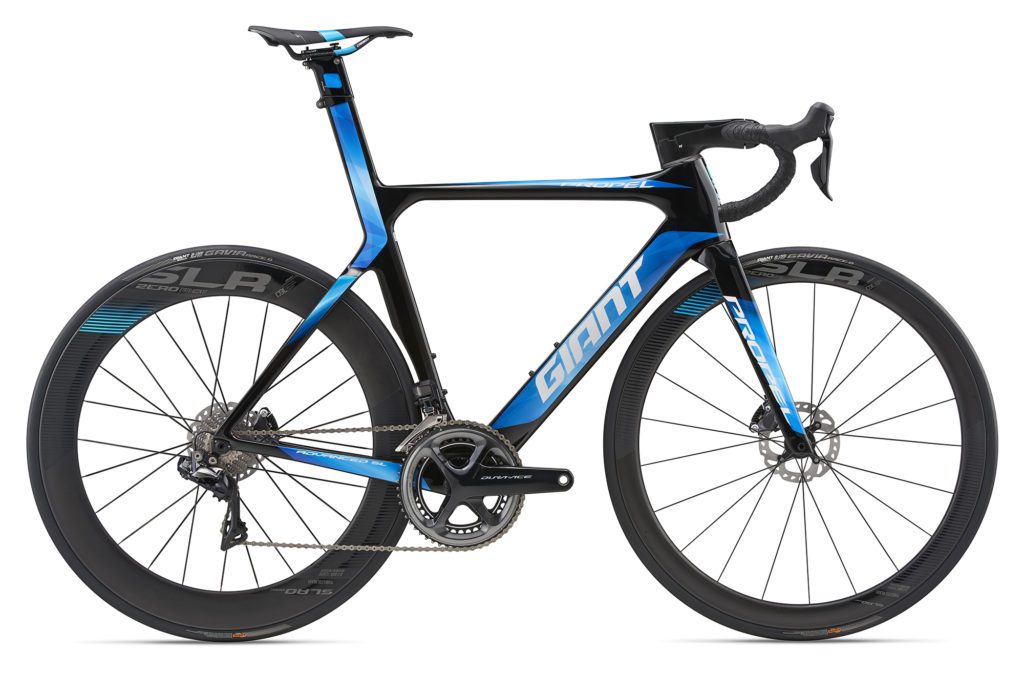 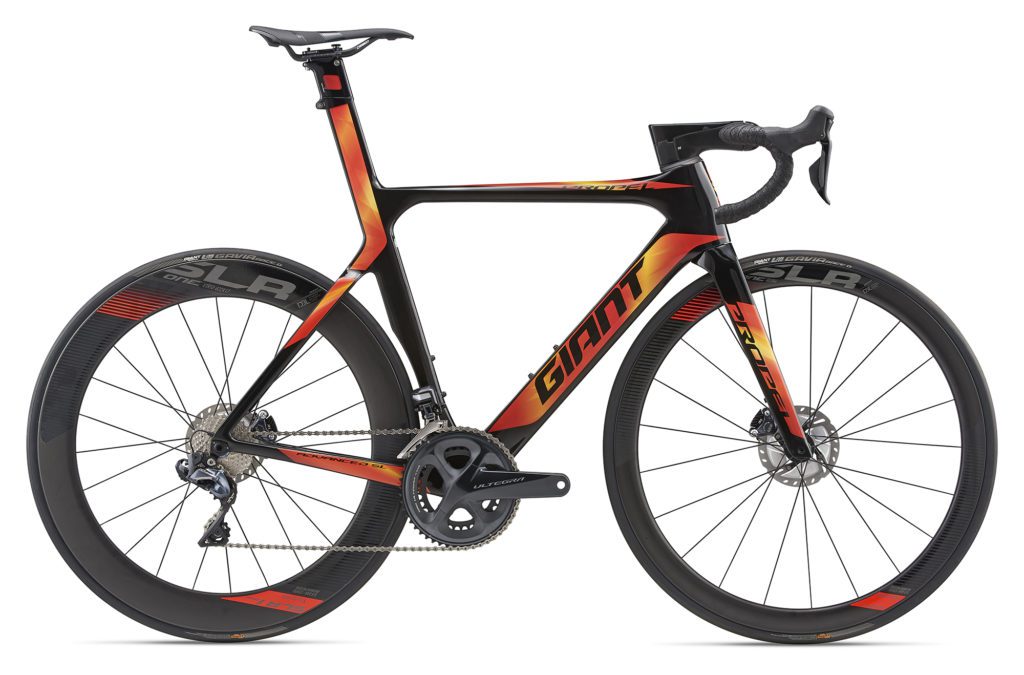 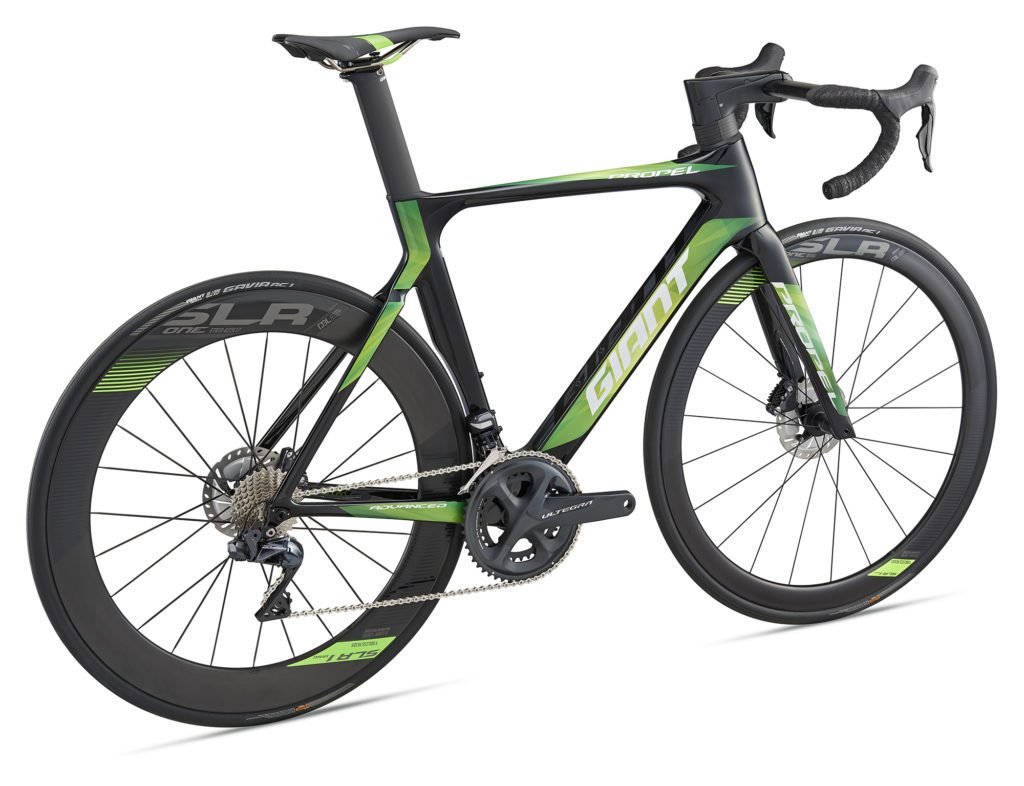 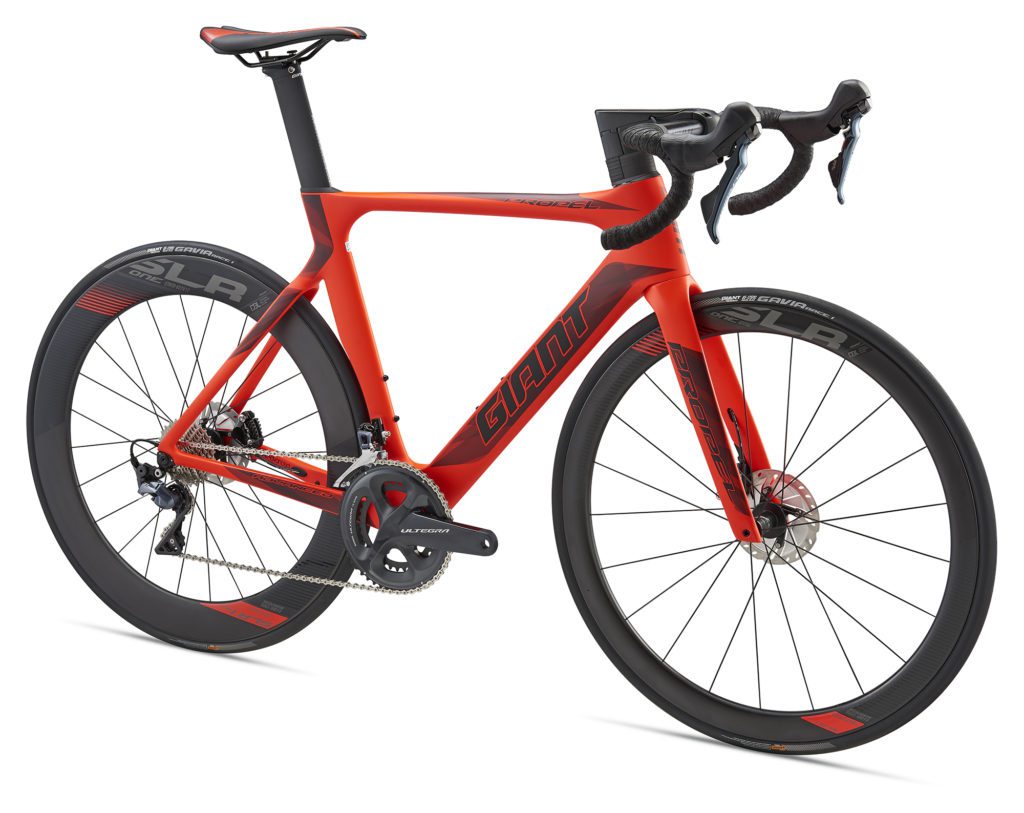 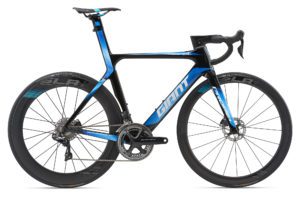 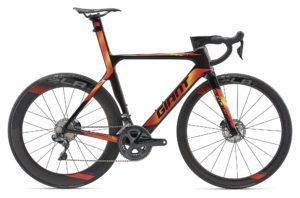 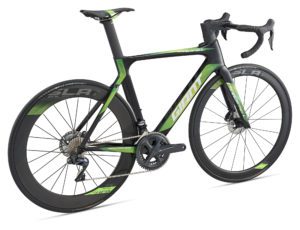 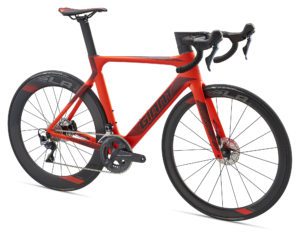