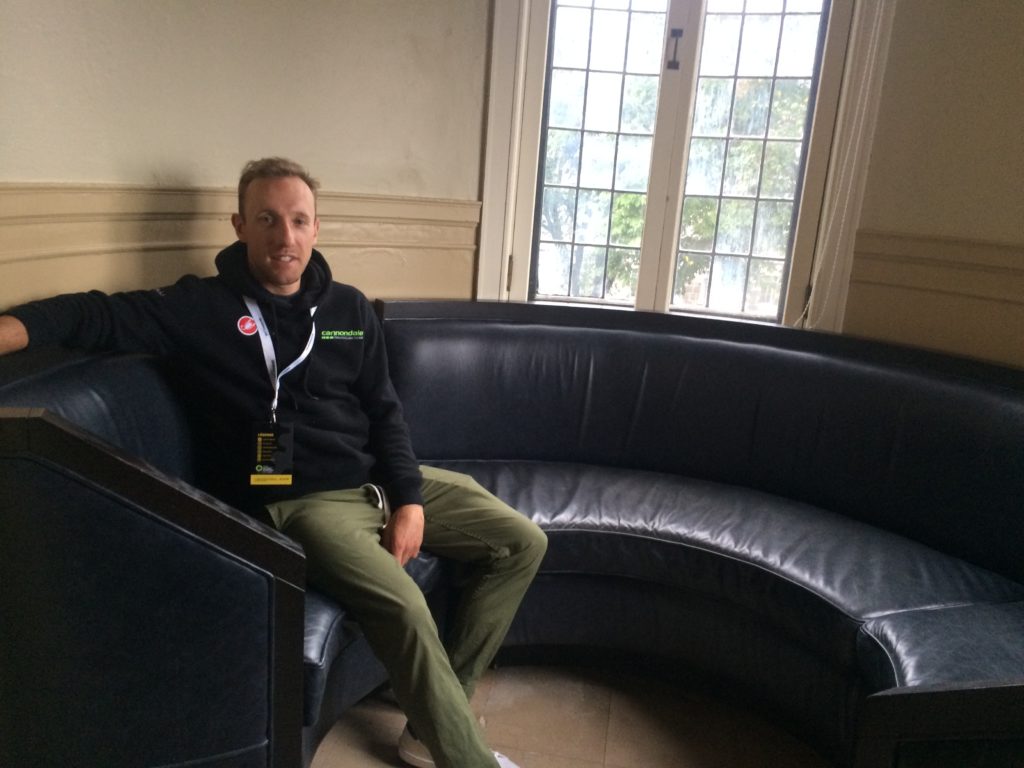 In a quiet nook at the Fairmount Château Frontenac in the heart of Quebec City, Michael Woods sporting a comfortable pair of slacks and a team Cannondale-Drapac hoodie reflected back on his first season as a professional cyclist at the WorldTour level. Woods, fresh of the Olympics which he competed in despite suffering a broken femur at the Tour of Poland, has spent considerable time sidelined in 2016.

“It’s been a roller-coaster season. The Tour Down Under, Catalunya, Pais Vasco and La Flèche Wallonne all showed I belong at this level,” said Woods who demonstrated he was prepared for the next step in his career with impressive early season results before suffering an injury at Liège Bastogne Liège. “At the same time there were a lot of obstacles and it definitely hasn’t been the best season of my career. I’ve never crashed so much and the toll on my body from that has been pretty significant. It wasn’t a fun season in that respect but I did learn a lot.”

Despite the lost skin, broken bones and time away from racing, Woods makes it abundantly clear that he is living the dream. “I’m really just enjoying racing at this level. The races are just super fun, it’s truly a professional sport. There are thousands of people at the finish and a long the course, you’ve got helicopters flying above you, you get treated so well by your team and staff, and you get to ride around in a cool bus.”

It doesn’t stop there. Life as a professional athlete isn’t always glamours but the way Woods describes it you would be excused for thinking it was easy. “Today I woke up, had a good breakfast, went out for a ride, had a nice lunch and I’m going to have a nap and a massage this afternoon. It’s like a spa day everyday.”

Rest and recovery are vital to producing the best performances but at the end of the day, Woods earns a salary to ride his bike. “People pay hundreds of thousands of dollars to do what I get paid to do every day,” says Woods who is clearly satisfied with where cycling has taken him. “I’m really lucky in that sense and that is probably the biggest take away from this season, that I love it.”

Part of what helps Woods to appreciate how privileged he is to be racing at this level are the life experiences he has accumulated. At 29, many riders are just hitting their peak after years full-time in the sport. Woods, on the other hand, is affectionately called “Rook” by his teammates after coming to cycling from running at 25-years-old.

“I worked for a living for four years and I am married. I am able to share that experience with the younger guys on the rare occasion and give them some perspective when it’s a wet day and they are complaning about riding their bikes. I can tell them it’s a lot better than going to work at a bank for eight hours.”

Woods only regret, that he didn’t start cycling earlier in his life. “When I was a runner I was pretty good but I would have never been able to make as much money as I make now. Cycling has more fans, cooler sponsors and there is even a sexy factor with descending, Spandex and just the race factor. It’s a cooler sport, no offence to running. I love running. It’s one of my true loves, but all around, cycling is better known and more celebrated.”

With a contract for 2017 secured, Woods is looking forward to next season where he hopes to continue to build off the promising signs for earlier this season. “I’m just getting started, this was my first season pro and the Olympics inspired and motivated me. I would love if I could make it to 2020 and even 2024 when I will be 37.”