“A power meter will contribute more to performance than a new a set of wheels,” said Russ Johnston, executive vice-president of marketing and corporate communications at Pioneer Electronics. I did scoff a bit when he made that declaration. Let’s face it: a new set of hoops can totally transform a bike. But as Johnston explained more, I began to see his point. He wasn’t talking about the bike’s performance, but the rider’s performance. He talked about how riding with a power meter helped him improve his time on a local hill. Power meters, he said, aren’t just for the hard-core racers. “It’s really fun not to get dropped and manage the entire ride,” he added. Also, with the cost of power meters in the range of many wheelsets, the price for measuring your watts is getting more affordable. Specialized spec’d its latest S-Works Venge with a Quarq power meter. This year, Shimano added a power meter to its Dura-Ace groupset. Power. It’s growing.

With the means to measure wattage on the rise, I decided delve into the behaviour of three top meters. I devised a test to see what I could learn about these machines that are playing a role 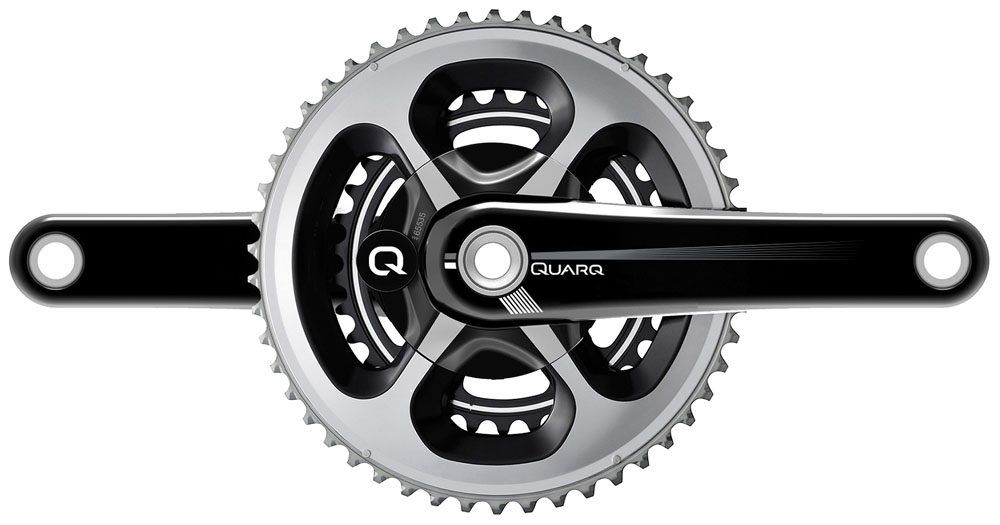 The Elsa RS, like all Quarq power meters, is in a crankset spider. The Elsa RS is designed to work with 11-speed Shimano Dura-Ace 9000, Ultegra 6800 and 105 5800 groupsets. For my test, Quarq sent me 52/36-tooth Dura-Ace rings with 170-mm carbon crankarms (which are akin to SRAM Red crankarms) to mimic the setup I have on my Giant TCR. I also needed a SRAM bottom bracket for the installation.

The Quarq has a feature called 10K, which manages the effects of temperature changes on power measurement. It also has OmniCal, a development that lets you swap chainrings without affecting the accuracy of power readings. The company has a smartphone app called Qalvin for diagnostics and firmware updates.

RELATED: Use your power meter for the perfect interval

Since I’m a home mechanic of a certain skill level, installing a bottom bracket and crank is outside my range. If you’re not comfortable with installing a crankset, take your Quarq to your local shop. My mechanic said the installation was straightforward. 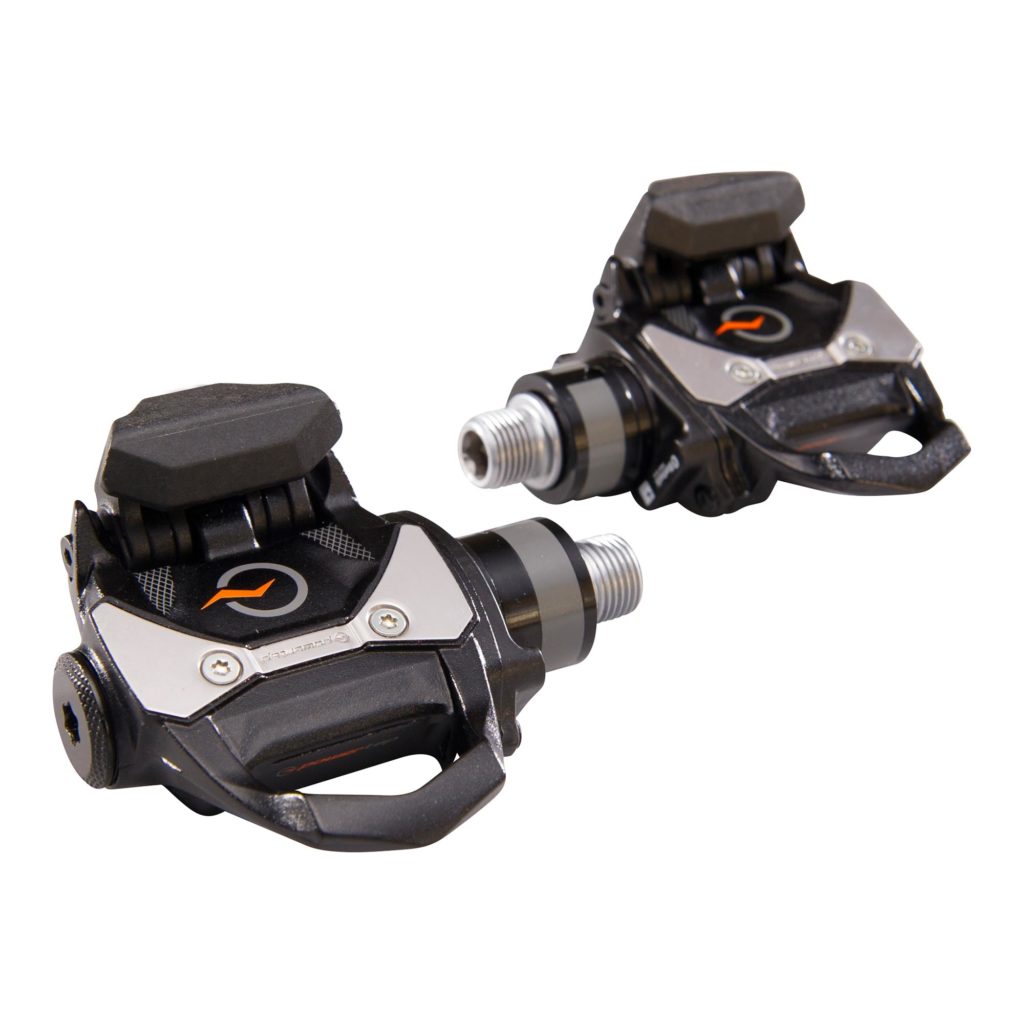 PowerTap, which has long had hub-based power meters, released its P1 power pedals a little more than a year ago. Each pedal has its own meter. If you’re getting your data via ANt+ on your head unit, then the information from the right pedal is transmitted to the left pedal, which then sends everything on to the computer. If you’re receiving Bluetooth Smart signals, each pedal transmits individually. Depending on the head unit you have, you’ll see various metrics comparing left/ right power.

The ease of use with the PowerTap pedals is stunning. Can you put a pair of pedals on your bike? Then you can put on the P1 power meter. Even replacing batteries is a cinch. The pedals are powered by common AAA cells.

RELATED: Power your way to speed: Improved strength leads to a faster you

The pedals require a proprietary pair of cleats, which resemble Look cleats. They offer six degrees of float. If you are a fan of Shimano, Speedplay, Time or any other style of cleat, you’ll just have to adapt to the P1 cleats. 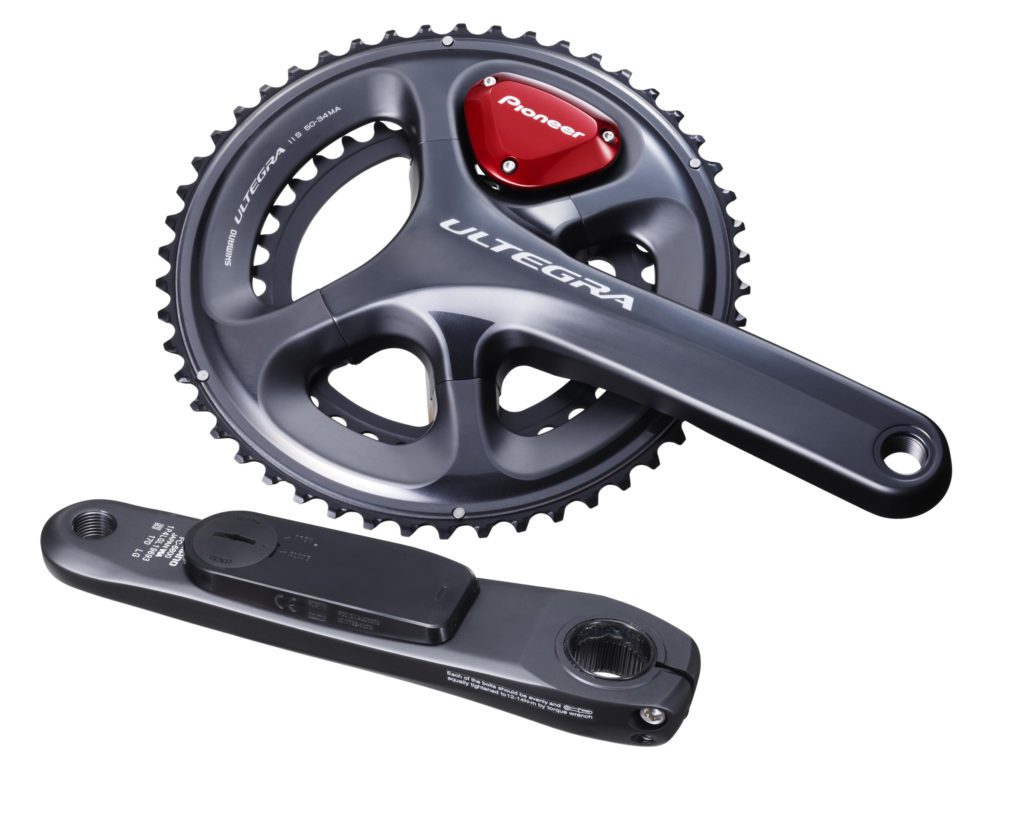 It’s been about three years since Pioneer got into the bicycle power-meter game, which means most of us have stopped saying, “Pioneer? The guys who do car stereos? Really?” The company had all the technology necessary for capturing the watts put out by a cyclist. Its first foray into the market provided a rider with a lot of data, including left/right power readings and the direction of force the rider is applying at 12 points throughout a crank’s rotation. If you don’t unweight your foot between 6 and 12 o’clock on the pedal stroke, the Pioneer’s head unit shows you that information.

With the release of the second generation of the Pioneer system, the power meter and its components got a whole lot better looking. For example, the drive-side transmitter is no longer held in the spider with cable ties. Parts also got a bit slimmer and smaller so they fit better on more frame.

RELATED: Get off your bike to get better on your bike

With the release of the second generation of the Pioneer system, the power meter and its components got a whole lot better looking. For example, the drive-side transmitter is no longer held in the spider with cable ties. Parts also got a bit slimmer and smaller so they fit better on more frames.

If you own a set of Shimano Dura-Ace 9000 or Ultegra 6800 crankset, you can send it away to get the Pioneer strain gauges and transmitters installed. If you don’t have one of these Shimano sets, you can get them from Pioneer with their technology installed. Either way, at the moment, you only have those two crank options. Like the Quarq, installation is pretty advanced for your average home mechanic. Pioneer recommends leaving the setup to our local shop. My mechanic said the install took longer than the Quarq as the Pioneer system also required the placement of two magnets on each side of the frame, which help the sensors in transmitting position information.

For my test, I turned to my Android smartphone, which can receive ANt+ signals. To capture those signals, I installed the IpWatts app created by Ifor Powell. The app can record data from as many as four power meters at the same time. For each second of a session, IpWatts grabs a few metrics. I focused on cadence, power and whether or not IpWatts received a clear signal for that moment in time. “Ideally you get real data every second,” Powell said. “If you don’t, you still get good average data but you’re losing some of the finer-grain details.”

The one issue with this test is that I couldn’t run all three power meters at the same time. So, I ran the Quarq and PowerTap meters together. Later, I had the Quarq swapped out for the Pioneer and installed the PowerTap pedals once again. 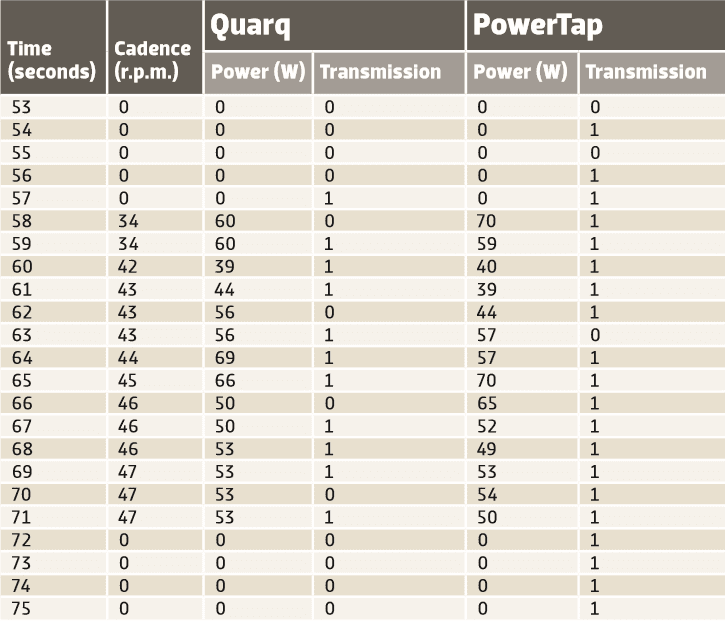 The chart above, from one of my rides with the Quarq and the PowerTap, shows me coasting between Seconds 53–57 (zero cadence values), pedalling from Seconds 58–71 and coasting again from Seconds 72–75. Notice that when I wasn’t pedalling, the Quarq wasn’t transmitting data (as shown by the zero values in the Quarq Transmission column. Recall that the Quarq is an event-synchronous power meter. It only sends data when it’s spinning. The PowerTap, except for a few dropped signals, transmitted even when the pedals weren’t in motion. Both power meters dropped a few signals while I was pedalling.

For averages and other data, let’s look at an 855-second (almost 15-minute) trainer ride I did. What’s important about this session is that I was pedalling the whole time so both power meters would transmit data throughout.

After comparing these figures with other sessions, I’m confident that these numbers tell an accurate story. The Quarq tended to record higher power averages for my rides and have fewer missed signals.

When my Quarq rides were done, I had the Pioneer meter put on my Giant. As I did before, I added the PowerTap pedals and went for a variety of rides. One ride, 50 minutes with a lot of hard efforts on short climbs, tells the story of these two meters the best.

The Pioneer tended to record lower average power throughout a session when compared with the PowerTap. What’s stunning is that in 3,093 seconds, or 3,093 signal checks on the Pioneer meter, there were only five missed or dropped signals. The Pioneer can definitely beam data.

The importance of head units 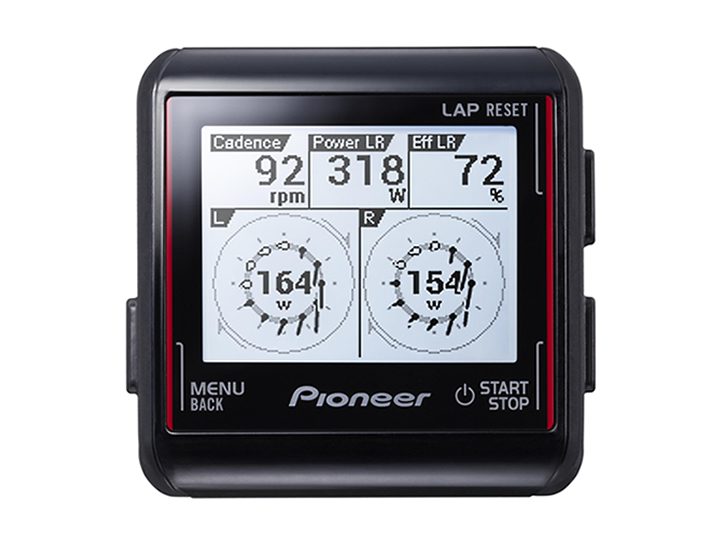 While the focus of this test was the power meters themselves, I did look at how their data was displayed in a few head units. For one, I need to make sure what I was seeing in IpWatts wasn’t out of wack. (It wasn’t.)

All of the power meters were easy to pair with the head units. By default, the Pioneer transmits data in a uniquely configured ANt+ format. I had to set the power meter to a standard ANt+ transmission so that other units, including my smartphone, could read the signal.

The Pioneer is the most striking example of the importance of the head unit choice. You can use the Pioneer meter with non-Pioneer head units. But to get all the data available and to manage the system, the Pioneer cyclo-computer (SGX-CA500) is the way to go. For the PowerTap pedals, you want a head unit that can display the left/right power information. The PowerTap Joule GPS+ is one of the strongest candidates there. The Quarq plays well with many head units, but it does work better with some compared with others. Some head units, such as the Garmin 500, don’t handle data from event-synchronous power meters like the Quarq well, especially when you’re coasting.

Which of the three is better?

So, after all the testing, can I say which of the three power meters is better? Well, not really. I can say that are all consistent performers. Sure, some may record higher averages than others, but they do so regularly. For most cyclists, all three are more than capable of bringing quality data to training rides and, ultimately, improving their performances.

RELATED: 4 trainer workouts to get you ready for cyclocross season

Since all of the meters are strong, you should let more practical matters dictate which power meter is right for you. Do you like the price for what you get? Do you want the reams of data the Pioneer provides? Do you want the portability and swappability of the P1 pedals? Do you want simplicity of the Quarq? Will the power meter work well with your existing head unit, or will you need to get a new one?

It may not seem fair that I’m leaving you with questions. But if you can answer them, you will find the best power meter for you.