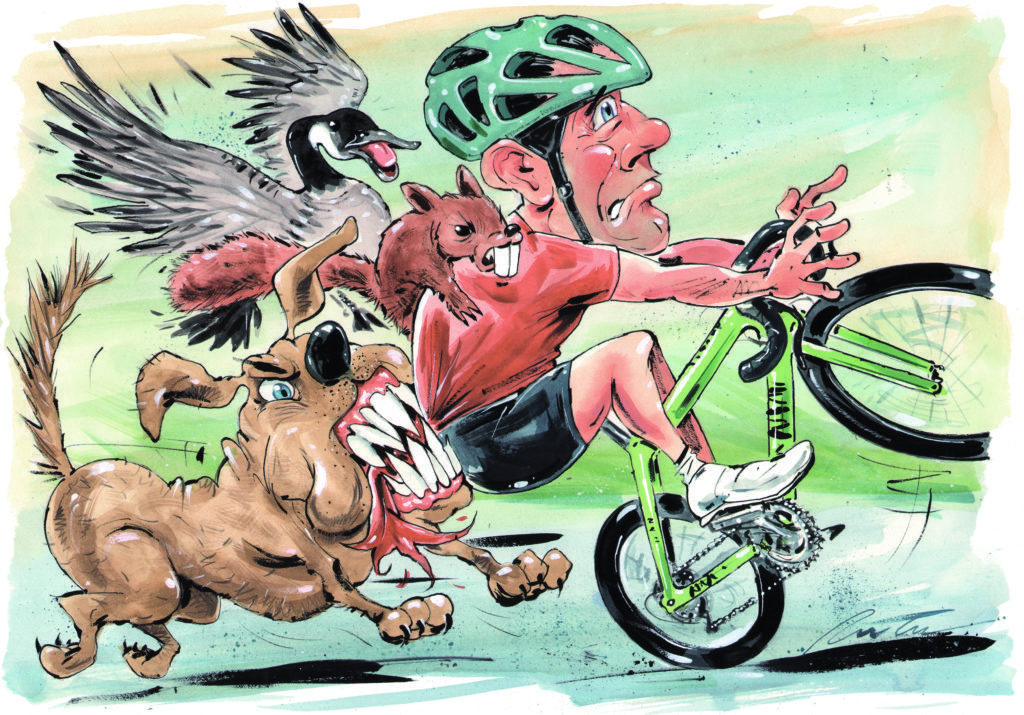 We cyclists are a careful bunch, at least in some respects. While many of us (present readership excepted, of course) roll through stop signs and treat traffic lights as colourful decorations rather than indicators of rights-of-way, we nonetheless tend toward self-preservation. This instinct leads us to be rightfully fearful of other users of the road, particularly when those users are driving cars, trucks or buses.

And with good reason. Anyone who’s ridden a bike on city streets more than a handful of times has experienced a close call with a driver. Some of these near misses are the driver’s fault. Some, if we’re being honest, are our own. Regardless of where the blame lies, we know all too well not to bring a bike to a car fight, as the old saying goes.

But I’m here to tell you that the real hazards of the road take a different form – and that by focusing on cars and other vehicles, we are unwittingly blinding ourselves to far greater dangers.

RELATED: Better assaulted by a club than by a truck

You may think I’m talking about pedestrians, and I am, though not the human kind. Yes, it’s true that a person stepping into the path of a cyclist can be disastrous. But I’ll save that topic for another column. Today I’m talking about a different type of pedestrian: the animal type. Yes, animals are in fact pedestrians (at least when they’re walking or running), and based on my own and my friends’ experiences, animals are far more dangerous than people. Let me share a few examples to illustrate my point.

First, there’s the squirrel. This animal, though arguably cute and generally non-threatening, can cause life-changing damage through its erratic approach to crossing the road. We’ve all seen them – running partway into the road, stopping, looking about as though they’ve forgotten where they’re going, and then darting off in some random direction. A few years ago, one such indecisive specimen suddenly changed course and ran right underneath the front wheel of my bike. The result was a concussion, a broken collarbone, a cracked pelvis, and 10 weeks of rehabilitation – and not for the squirrel. I’m still terrified of them to this day, as are all my riding buddies.

It doesn’t end with squirrels. It turns out that even man’s best friend can be a cyclist’s worst enemy. One of my former teammates hit a dog while racing down Mount Royal in the 1980s in an elite men’s road race. He woke up in hospital the next day to learn that a team of surgeons had repaired both his legs with metal pins. He now sets off metal detectors every time he goes through airport security. On the upside, he can stick fridge magnets to his kneecaps – a party trick that never gets old.

RELATED: Top 5 yoga poses for your back, shoulders and neck

It’s not just the animals of the land that we need to worry about, either. A couple of months ago, while riding in the west end of Toronto, I passed some road construction in the curbside lane. Suddenly, a Canada goose took off from behind a safety pylon. (I must have startled it awake from either a nap or a mandated union break.) As it took flight, it came within about 2 cm of my face. Now, I like a face full of goose as much as the next Canadian, but I’m sure it could have knocked me flat off my bike, and then attacked me for good measure.

These are only a few of the examples I’ve experienced or know of, in which animals have posed a grave danger to cyclists. A quick Internet search will yield hundreds of helmet-cam videos of terrifying interactions between riders and wildlife. One of the worst I’ve seen features a kangaroo attacking a cyclist in Australia. Now you may say that we don’t need to worry about kangaroos in Canada – and for now, you’d be right. But we all know that global warming is accelerating, and with Trump in the White House and the U.S. Environmental Protection Agency now headed up by a friend of the oil and gas industry, it’s only a matter of time before these nasty animals are hopping along in a bike lane near you, boxing gloves at the ready to take you out.

An army of furred, feathered and beaked aggressors patrol the streets and you are fixed firmly in their sights.