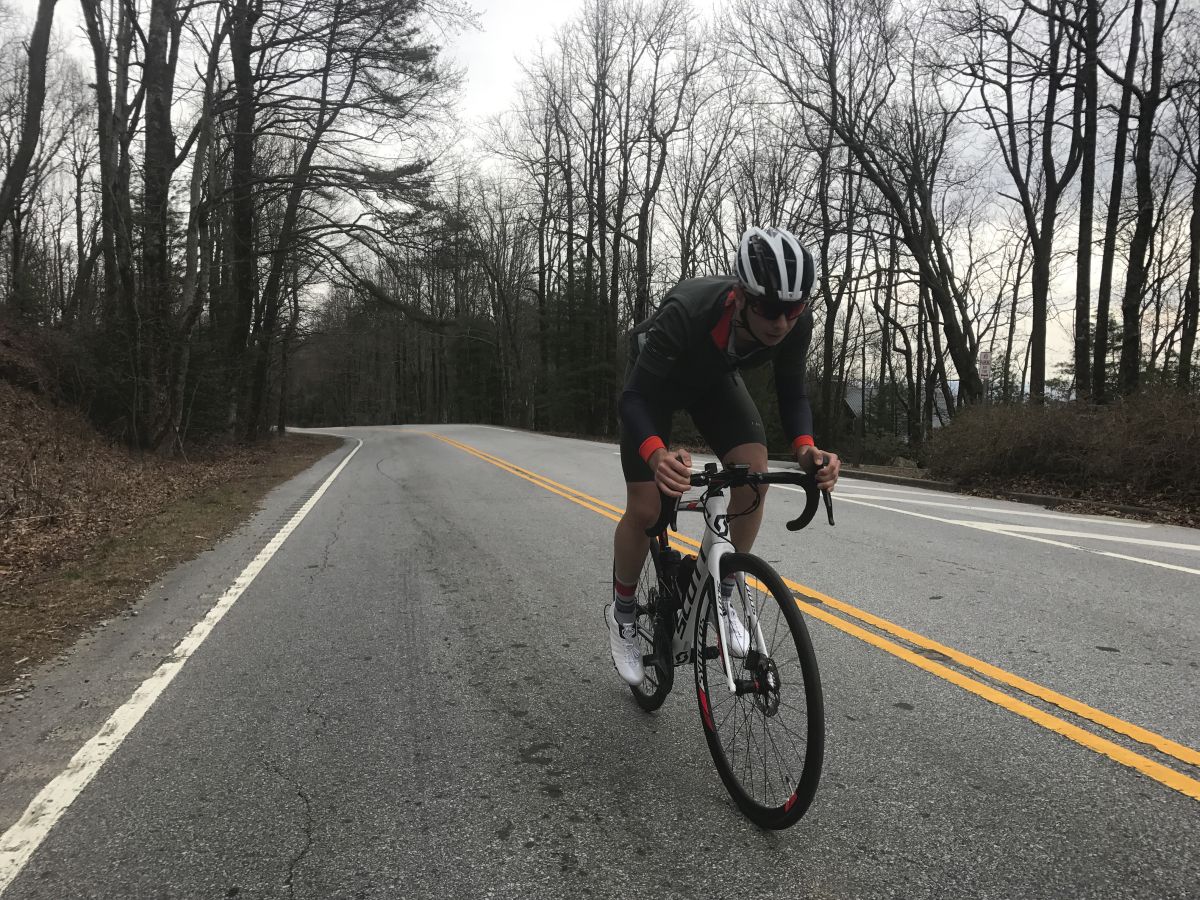 The Scott Addict was first released as a lightweight climbing frame but it has received tweaks throughout its iterations that have made it a comfortable and versatile all-rounder. Adding Shimano’s BR-RS805 hydraulic disc brakes with 160 mm rotors to the lightweight frame, building it up with 11-speed mechanical Shimano Ultegra and slapping on 28 mm Continental Grand Sport Race Fold brings out the best of the bikes characteristics making it a blast to ride on any terrain.

The 2017 Scott Addict 20 Disc respectively light for a disc equipped road bike, weighing in at 18 lbs for the 54 frame we tested, despite being made from Scott’s second tier HMF carbon. With a race geometry and arriving out of the box with a 110 mm stem, the bike looks and feels like it’s designed to go fast. With disc brakes it also can slow you down reliably whether you are descending a 10 km Appalachian climb in the wet or modulating your speed heading into a rough gravel corner. The wide tires ensures a very smooth ride on tarmac and versatility to take the bike conveniently on gravel. 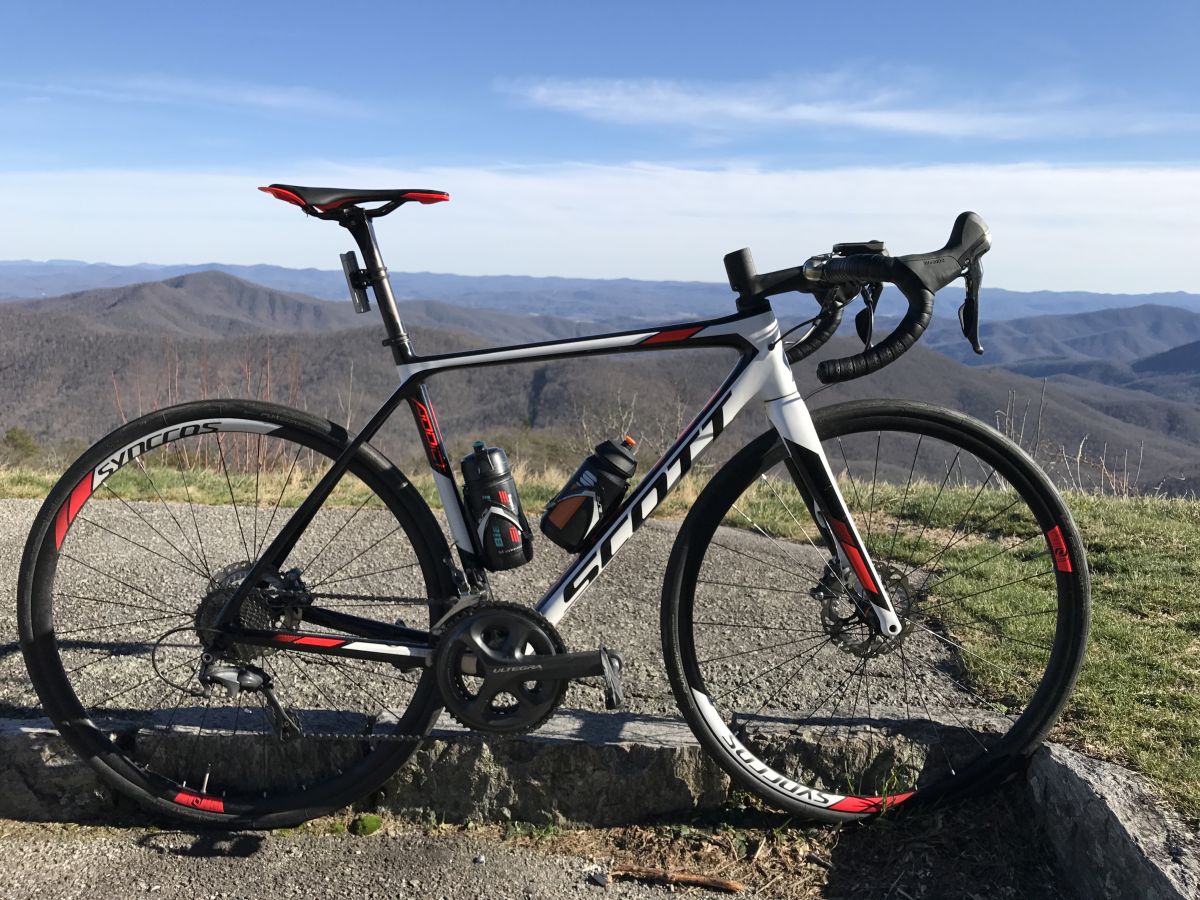 It took me no time to dial in my position on the bike. I like a slightly more aggressive geometry but my favourite rides take me over long distance over varying roads and terrain which gives me a great appreciation for the comforts of a more endurance oriented bike. The Addict is a great climbing bike and I set some PRs on some familiar roads feeling exceptionally good in and out of the saddle on the Addict when the road turned up.

The bike isn’t limited to one speciality and going down was equally as fun. The disc brakes gave me more confidence, especially on long descents, and allowed me to modulate my speed confidently on any road surface. 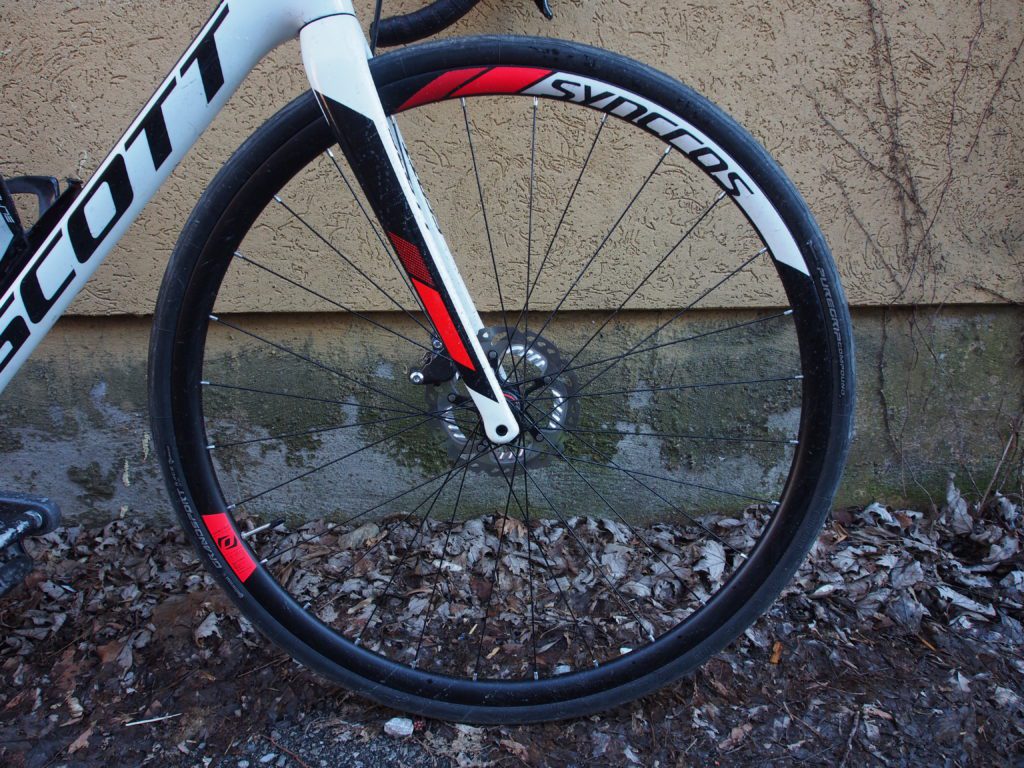 I was also really impressed by the bikes performance on the flats. In the drops sprinting I did feel the Addict 20 Disc was missing a little bit of pop of a higher spec’d build. With thru-axles, the Syncros RP2.0 Disc wheels feel quite stiff and responsive though they don’t accelerate and hold speed like a higher end wheelset would. They are also on the heavier side. This would definitely be the first place to look for an upgrade on an otherwise excellent build. 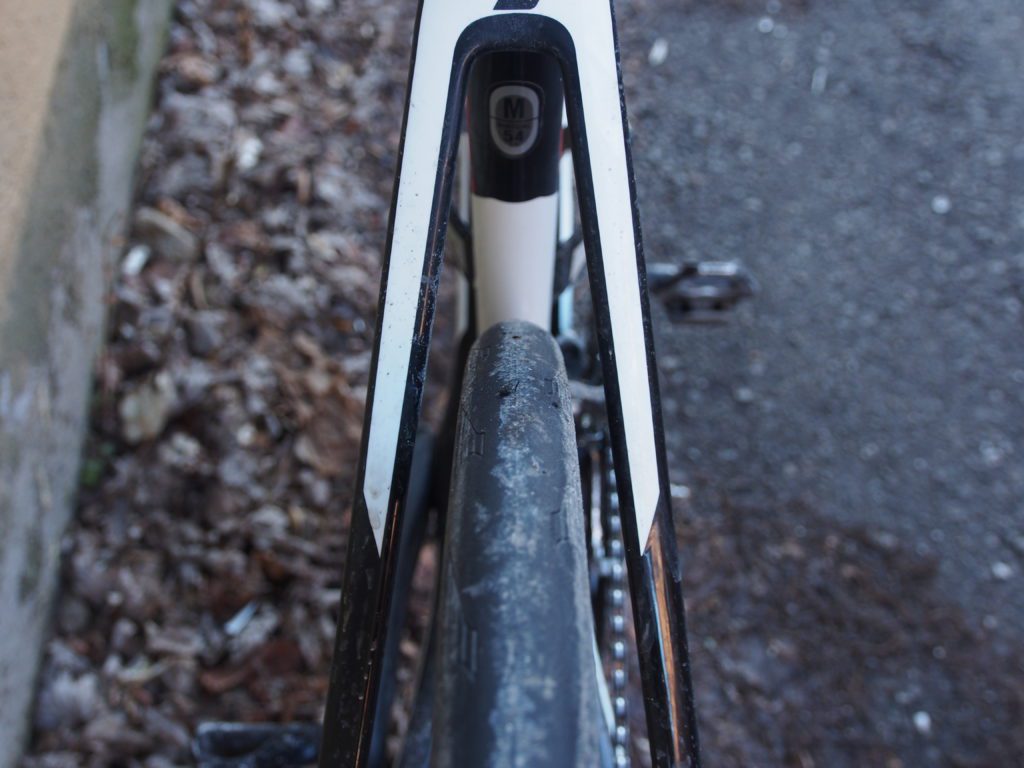 I suspect the ample clearance on the frame would have allowed me to squeeze 30 mm tires onto the frame though going beyond that wouldn’t be possible. The frame is also very comfortable. That may in part be due to the 28 mm tires but the Syncros RR2.0 saddle was also to my liking. The thin seat stays also play a role in ensuring the ride over rough surfaces isn’t all that harsh. 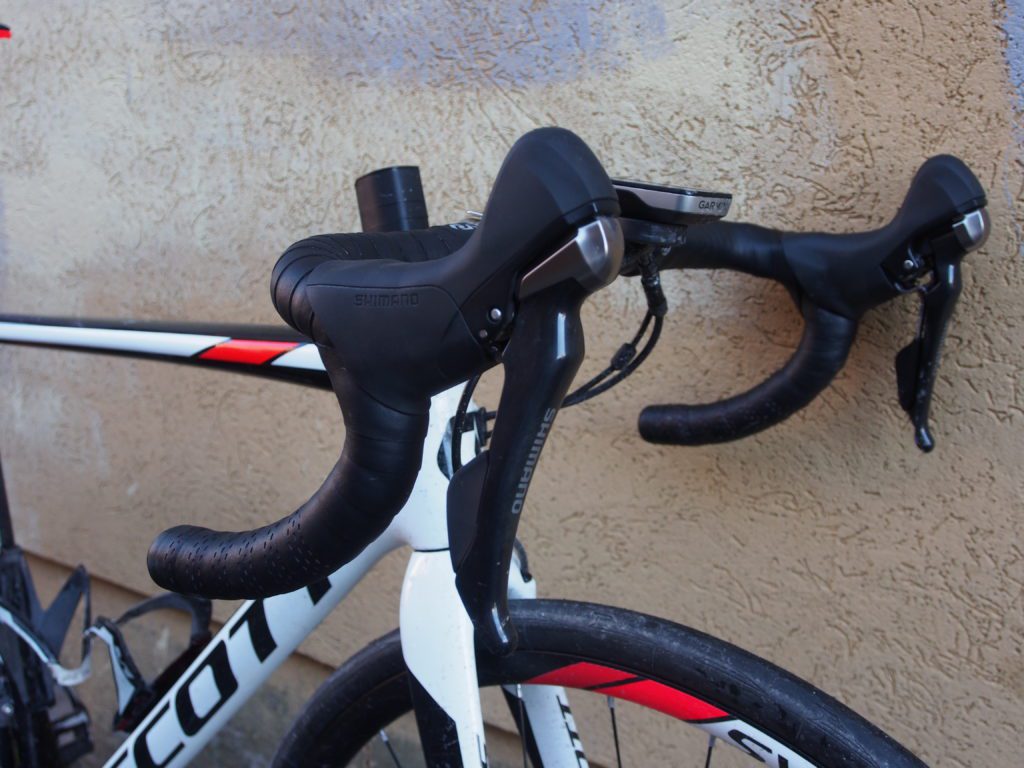 If you have small hands you may find the Shimano ST-RS685 shifters to be a bit of a handful but I got used to them quickly and liked them more than I had originally expected. The Shimano Ultegra 11-speed groupset performed as well as we have come to expect from Shimano’s groupset. Scott spec the bike with a 105 chain and cassette for a bit of a saving on the wallet possibility adding a couple of grams to the build but nothing more. The rest of the bike is built with Syncros RR2.0 components. The mix of carbon and allow components is nothing fancy but makes for a solid build. 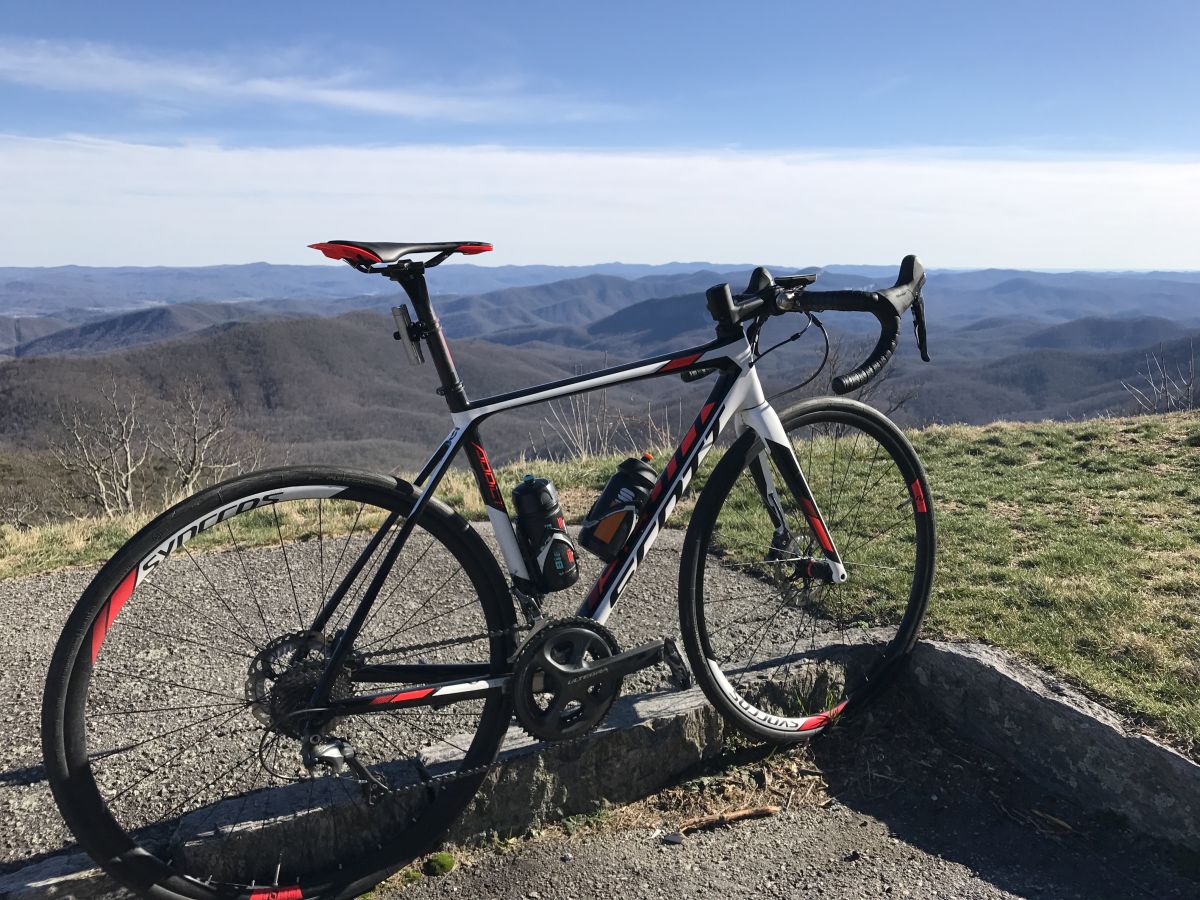