Coleslaw. It’s a summer barbecue pot luck staple but oftentimes, this creamy side isn’t your healthiest option for getting the veggies into the diet. There’s a way to change that. These coleslaw recipes revamp the classic and minimize the extra fat, maximize the nutrient content and don’t sacrifice taste in the process. Make a point of testing out these recipes after your rides this summer.

This easy cabbage/carrot slaw is topped with seeds of your choice (pumpkin, chia, sunflower, all of the above) and a garlicky lemon dressing. One batch serves four to six as a side dish.

Instead of relying on mayo for that creamy coleslaw texture, this recipe swaps in Greek yogurt instead, which ups the protein without detracting taste. This recipe’s author recommends that you try putting a few spoonfuls of coleslaw on your burger at your next barbecue… don’t knock it till you try it.

The granny smith apple flavour keeps this recipe crisp and cool in the hot summer months. The lemon in the dressing prevents them from turning brown (which is also a good trick to know if you’re ever packing apple slices to go). The recipe calls for letting the dressing sit for at least an hour so make sure you plan ahead.

This recipe is coleslaw-meets-quinoa, a surprising match made in taste-bud heaven. The addition of quinoa also means that this recipe can serve as a main. Add grilled shrimp or chicken if you feel you need extra protein. 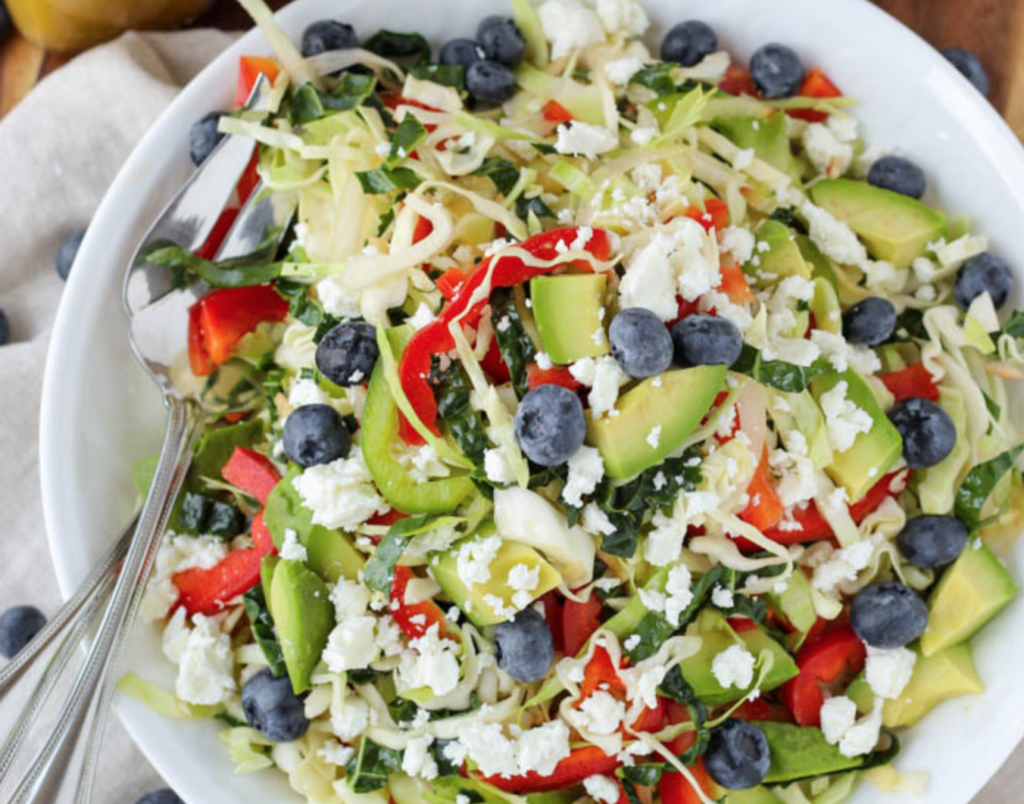 This slaw salad has a little bit of everything: cabbage, kale, apple, blueberries, avocado and feta cheese. Voila, summer in a bowl. This is one of those recipes that’s actually filling but completely healthy too.

This slaw shines as an entree or main, with cabbage, sunflower seeds, peaches and an apple cider vinegar dressing. Apple cider vinegar is made from fermented apples and has many health claims to its name (some backed by science and some not), such as the ability to lower blood sugar levels and cholesterol.

Cabbage, apple and kale salad with cranberries and pistachios

This crisp slaw combines sweet cranberries and crunchy pistachios. For a more summery salad, sub in the dried cranberries for fresh cherries or raspberries. Take advantage of the season’s best produce while you can.

This dressing is a good one for any athlete to have in their recipe arsenal as ginger is a great anti-inflammatory ingredient. Cashews, carrots and cilantro make for a vibrant and colourful dish. Got a guest or family member who hates cilantro? Put it in a dish and leave it out on the table for others to use it as an optional garnish.