The pandemic has affected this season’s WorldTour in huge ways, from forcing pros onto indoor trainers to the jam-packed, re-imagined race schedule. One thing Lotto–Soudal rider Tim Wellens will miss this year because of scheduling is the Grand-Prix Montreal and Grand-Prix Quebec. “Quebec city is very beautiful,” he says, “it’s one of the nicest races in the calendar.”

The Belgian rider has good reason to be a fan of the Canadian races. In 2015 he won the GP Montreal, and in 2019 he finished fourth in the same race (and ninth in the GP Quebec). “It was a very hot day,” he says, remembering his 2015 win. “We were full gas racing from the beginning to the end. There was lots of rain, but it was a really good day on the bike.” Because of the adverse weather there are hardly any photos of Wellen’s victory, but fans of his don’t need photos to guess which bike he rode up Avenue du Parc. The Ridley Helium has been a constant throughout Wellens’ cycling career, and has propelled him to 26 pro wins.

Even before he hit the pro peloton eight years ago, Tim Wellens was riding Ridleys. His father, Léon, was a professional cyclist himself in the 1980s and ’90s and now owns a bike shop which sells Ridleys.

The Ridley Helium, the brand’s lightweight climbing bike, is Wellens’ bike of choice. “I’ve spent almost my whole career riding on the Helium,” says the 29-year-old. He notes the changes it’s gone through over the years—upgrades in material, moving away from the integrated seatpost, the recent switch to disc brakes. “Every year there’s a small improvement on the bike, I’m very happy with it,” he says.

For his GP Montreal victory in 2015 Wellens was riding standard 53-39 gearing on the Helium.
“That year they updated the carbon, it’s a little stiffer,” he says. He had spent the beginning of the 2015 season experimenting with Ridley’s aero bike, but he found that he felt most at home on the Helium.

The bike is consistent, as is Wellens. In 2017, 2018 and 2019 he won the same stage (Trofeo Calvià) of the Vuelta a Mallorca. “The Helium bike is a climber bike,” says Wellens. “It suits the best of my capacities. The stage I won in Mallorca has a long downhill with a small kicker in the end. I find it very nice to do the downhills with the Helium, it’s quite fast in the corners.” 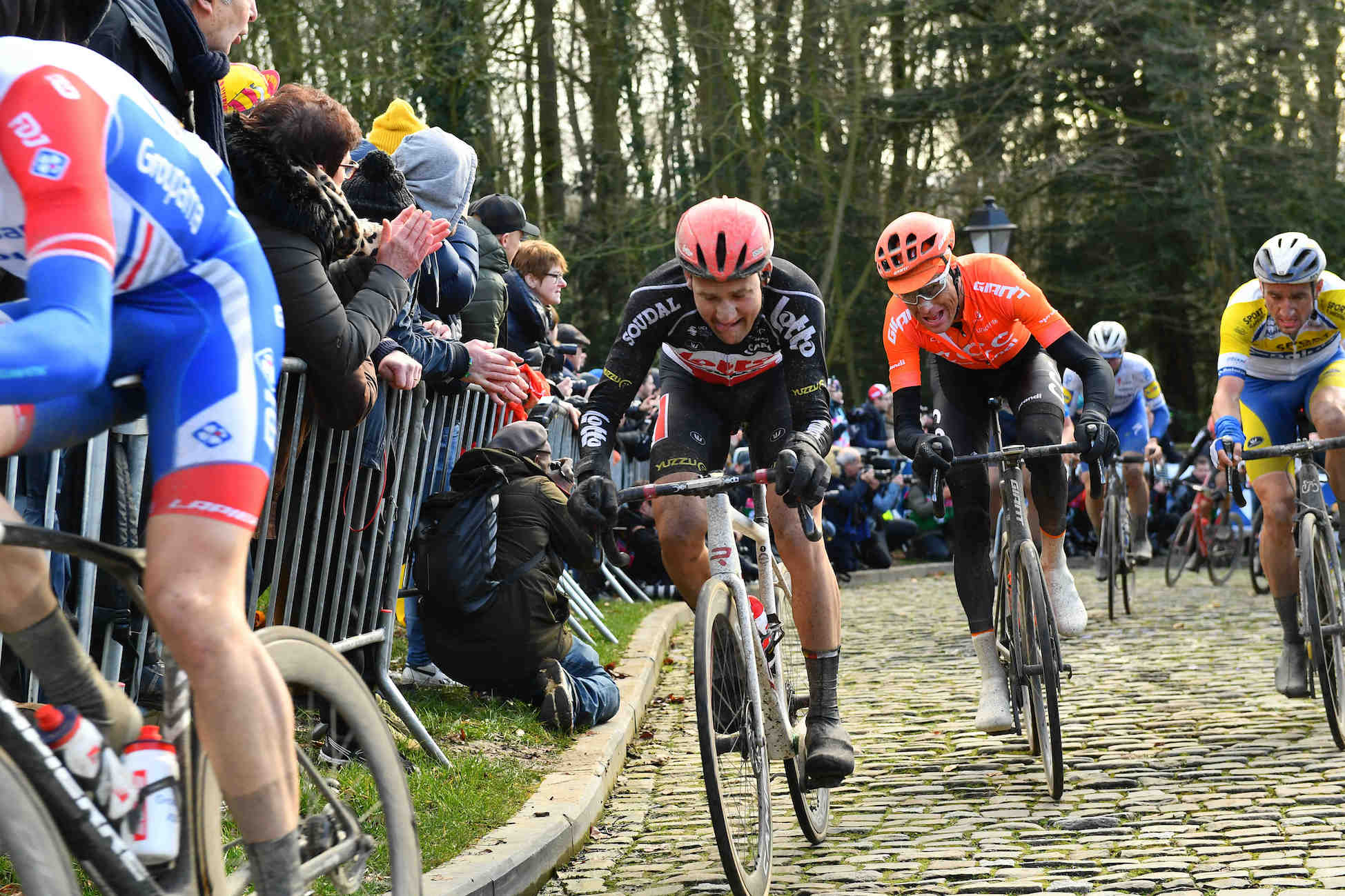 Unlike some of his Lotto–Soudal teammates, Wellens chooses to ride the Helium for every type of race (except TTs). In 2019 he rode it to third place in Omloop Het Nieuwsblad. “It was the same bike and almost exactly the same setup I rode at the GP Montreal,” he says. The only change he makes for the classics is the tires. The bike was equipped with the same Campagnolo Bora 50 wheelset, but for Omloop Wellens switched from 25mm classic tires to tubeless 25mm Vittoria Corsa tires with slightly lower pressure to absorb shocks.

In terms of his setup, Wellens isn’t one to make micro-adjustments for every race. There are a few tricks he’ll use here and there, such as double handlebar tape for the Tour of Flanders or handlebar tape on the bottle cages for Paris-Roubaix—but as long as he has the Helium Wellens is good to go.

A change of pace

Last year, a day after Il Lombardia (the last race of the season), Wellens embarked on a new kind of journey. He and teammate Thomas De Gendt decided to ride from Como, Italy to Semmerzake, Belgium—a six-day 1,200 km trip. Although he originally intended to do the ride on the Helium, after doing some research Wellens found that the Ridley X-Trail Carbon would be better suited for the extra bag weight, as their ride was self-sufficient.

The cyclists had a tailwind for most of the way to Belgium, “we really enjoyed it,” says Wellens. He rode 32mm slicks for comfort, as they were pedalling almost entirely on roads.

This winter the cyclists took another break from standard training and did a large loop around Spain on the Ridley Kanzo Adventure (the brand’s 2020 gravel bike). For their second bikepacking trip, the Lotto cyclists rode knobbier 36mm tires, as the route covered much more gravel and rough, mountainous roads. The trip was shorter, around 500-600km, but it gave Wellens a taste for gravel riding.

Wellens has been riding out the pandemic in Monaco, a popular training basecamp for pro cyclists. He estimates there are nearly 50 pros living in the country right now, “it’s hard to go for a ride without seeing another one,” he chuckles.

He says there are gravel roads that connect the mountain tops in Monaco. He’s excited to explore them, but, for now, Wellens is focusing on training for the upcoming season. He can be seen, on any given day, doing so on his Ridley Helium. “The Helium is a winning bike,” says Wellens plainly and confidently.