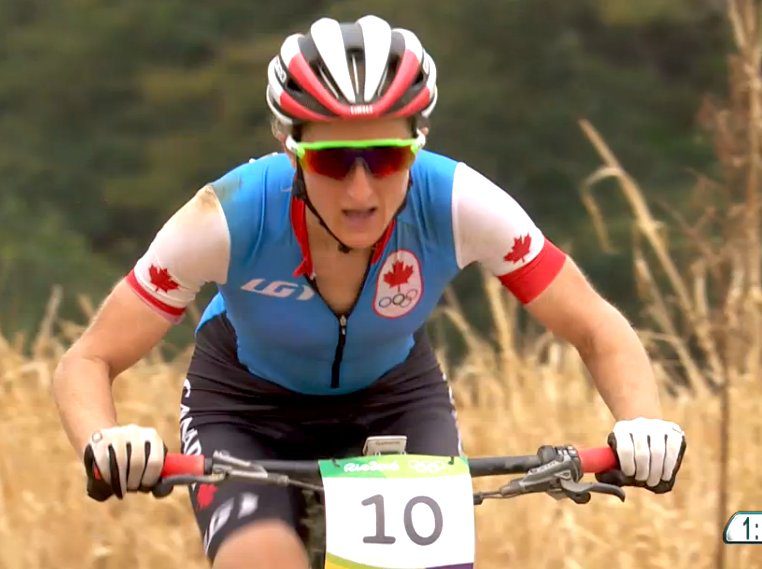 After coming so close in Beijing 2008 and the disappointment in London 2012, Canada’s Catharine Pendrel mounted a great comeback on Saturday to take bronze in the Rio 2016 women’s mountain bike race. Jenny Rissveds gave Sweden its first Olympic Games mountain bike medal in six editions of the knobby-tired competition, and it was gold. Emily Batty had a strong race and pushed Pendrel for third.

Batty was in the first line at the start while Pendrel was in Line 2. All eyes were on Dane Annika Langvad, world champion and winner of the first two UCI World Cup races this season. Three-time medalist Sabine Spitz (Germany) could be ignored at the riders’ peril. Pendrel took the most recent World Cup at Mont-Sainte-Anne and came runner up at Labresse, France, while Batty has had two World Cup thirds and bronze in the World Championships in 2016.

The Swiss rider Linda Indergand took the early lead on the first lap with Batty in position seven and Pendrel 14th after getting caught behind a crash.

Indergand led a chase of five by 10-seconds after Lap 1. Batty was 8th, just behind Langvad. Batty and Langvad joined the quintet at the start of Lap 2. Batty stayed at the back of that chase and a mechanical caused all seven to dismount on a narrow part of the course.

#CAN Batty holding onto the lead group sitting in eighth #Rio2016 pic.twitter.com/vrRoRzHBhX

Three riders including another Swiss came close to Indergand near the end of Lap 2. Batty crossed in sixth place, 28-seconds back.

#CAN Batty into 6th as Pendrel is moving up behind trying to narrow the gap to the leaders #CyclingMountainBike pic.twitter.com/SvhYhd4zYS

The chase grabbed Indergand on Lap 3 with Pole Maja Wloszczowska, silver medalist in Beijing 2008, taking over the front. Pendrel worked her way up to eighth as Jolanda Neff (Switzerland) rode point for the leading trio, Indergand having faded back. Batty was 7th and 18-seconds in arrears at the midway mark.

Swede Jenny Rissveds, the U23 world champion, grabbed the reins of the leading trio, while Batty hauled herself up to fifth, but nearly 28-seconds back. Neff faded back halfway through Lap 4 and soon the Canadians, along with Katerina Nash of the Czech Republic, had Neff in their sites.

They grabbed Neff on Lap 5 and Pendrel was suddenly in the bronze position, stomping on the pedals. Pendrel was down 30-seconds on the bell lap.

Rissveds, second place in the Albstadt, Germany round of the World Cup, made her move on the Pole in the first kilometre of the last lap, creating a huge gap that she kept all the way to the line. Batty separated herself from the others and nudged a little closer to Pendrel in the second half of Lap 6.

The golden Swede had time to high five the crowd. Wloszczowska now has silver medal bookends and was obviously very satisfied at the line.

Batty, who rode with a broken collarbone in London, had a fine race and came within two seconds of her teammate.