Every brand needs a gravel bike these days, it seems, and gravity-driven German direct-to-consumer brand YT getting in on the game with its first-ever drop bar bike is further proof. But is there still room for something new? Something interesting? With Szepter, a mountain biker’s gravel bike, YT does manage to carve out an interesting space for itself.

The Szepter line is only two models right now, but it’s far from a halfway entry into skinny tires. YT jumps in with two well-designed (and well-priced) distinctive bikes. The Szepter is clearly trail focused without being unnecessarily extreme. We had a chance to test out YT’s new gravel bike for a few days during a sweltering California heat wave. Read on for details on the bike and our first impressions. 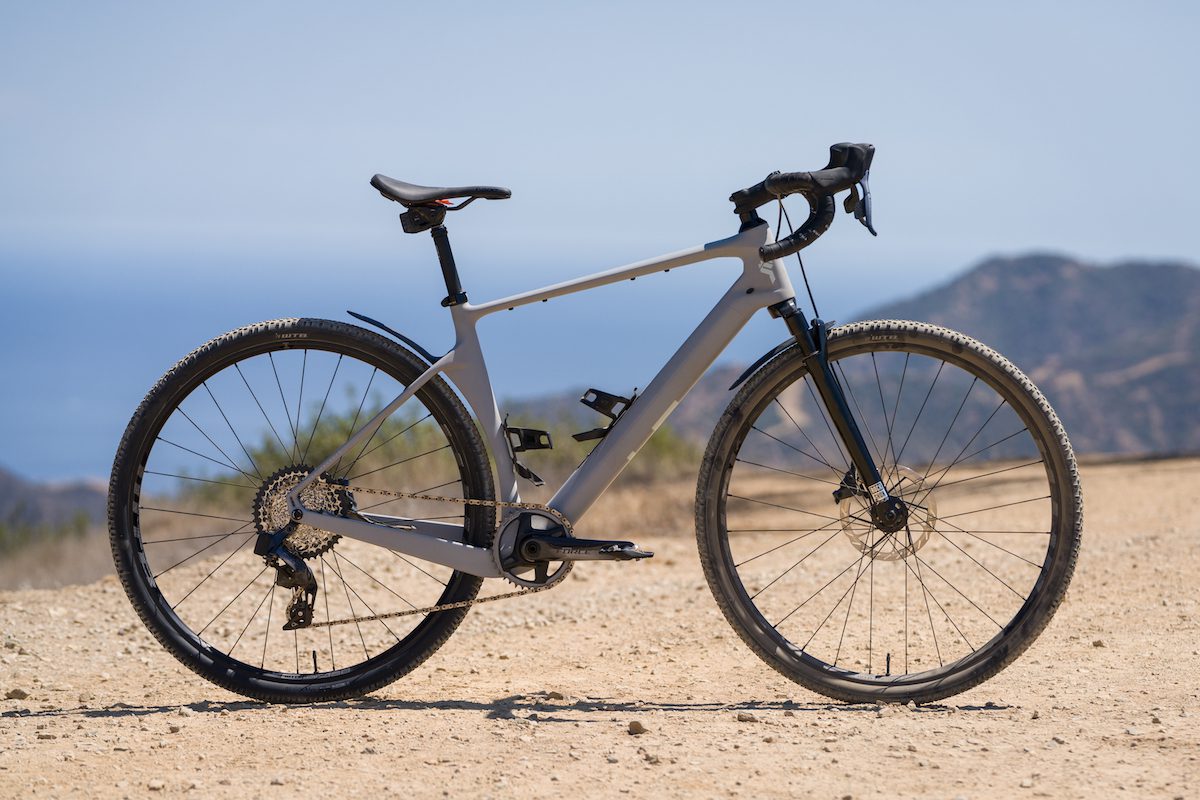 What is a Szepter? It’s YT’s mix of scepter and its German spelling, Zepter. It’s also a good sign that YT isn’t stepping into gravel lightly. According to YT, it “symbolizes superiority and authority,” and “dethrones conformity to existing design and function, as does the rider that conquers both road and trail.” So, YT is confident. It’s also bringing what it learned from years on the gravity side of mountain biking to the design of its gravel bike. This is, unapologetically, a gravel bike that is designed for rides with a solid percentage of singletrack mixed in with paved and unpaved roads.

Geometry: different but not extreme

With the German brand’s history of making bigger, long-travel mountain bikes you might expect YT’s first gravel bike to be something similarly extreme. Instead, YT mixes mountain influence with what’s already working well in gravel. There are no wild 66.6-degree head angles or mountain bike-width tires. But the Szepter is designed around a 40-mm RockShox Rudy Ultimate gravel fork. The higher-end Core 4 model also comes with a Reverb AXS dropper post with 50mm or 75mm travel, depending on size, with room to clear much longer-travel posts or even a 30.9 diameter post instead of the 27.2mm post the bike comes with.

Designing the Szepter around a fork allows YT to push the geometry on the Szepter without being too out-there. Head angles range from 69.3-69.4-degrees, slacker than the low-70s usually seen on gravel bikes but still reasonable. That, combined with longer reach and a short (for gravel) 70mm stem and shorter 425mm chainstays, keeps the Szepter handling quickly on trails without being twitchy or nervous at speed. YT also steepens the seat angle to 74.3-74.4 (depending on size) to give the Szepter better power transfer on steep, loose gravel climbs.

All in, it’s progressive but not unreasonable. YT was clear that it wasn’t out to prove they could do something extreme, the idea is to make something work. If it starts to look like an XC bike with drop bars, it’s not a gravel bike (though, other than 42mm tires, the Szepter still does get close to some XC hardtail geo). 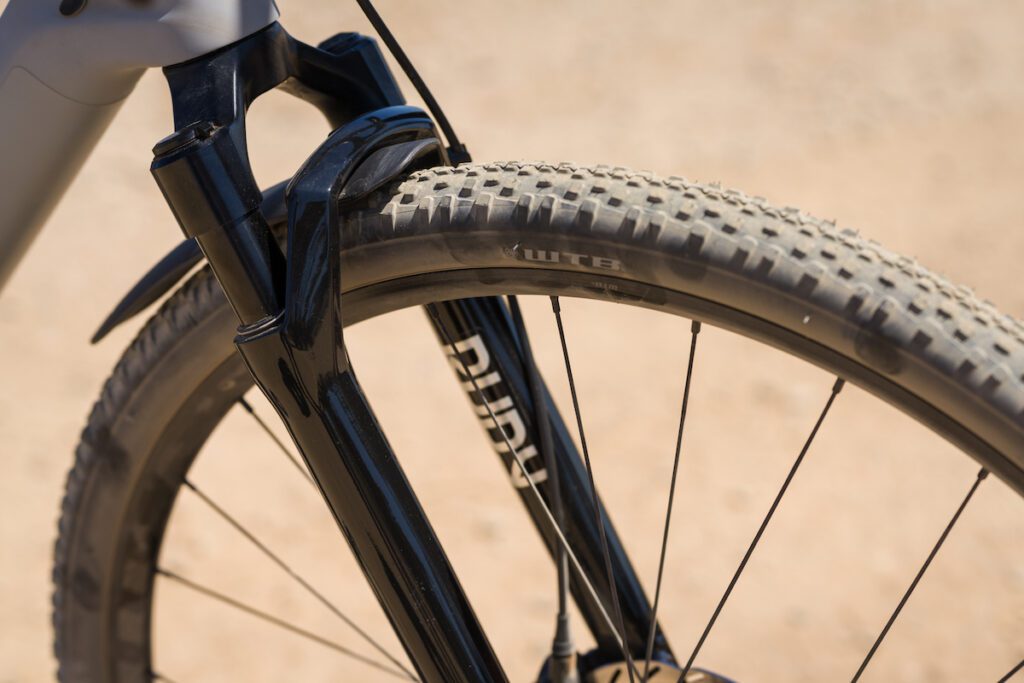 YT designs the Szepter around a suspension fork 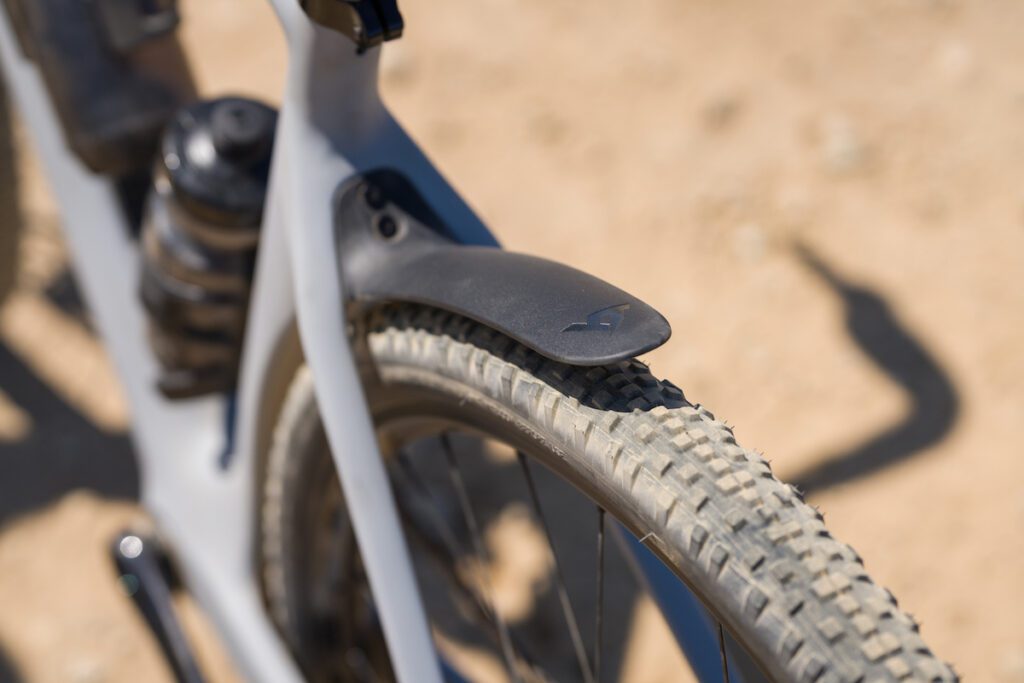 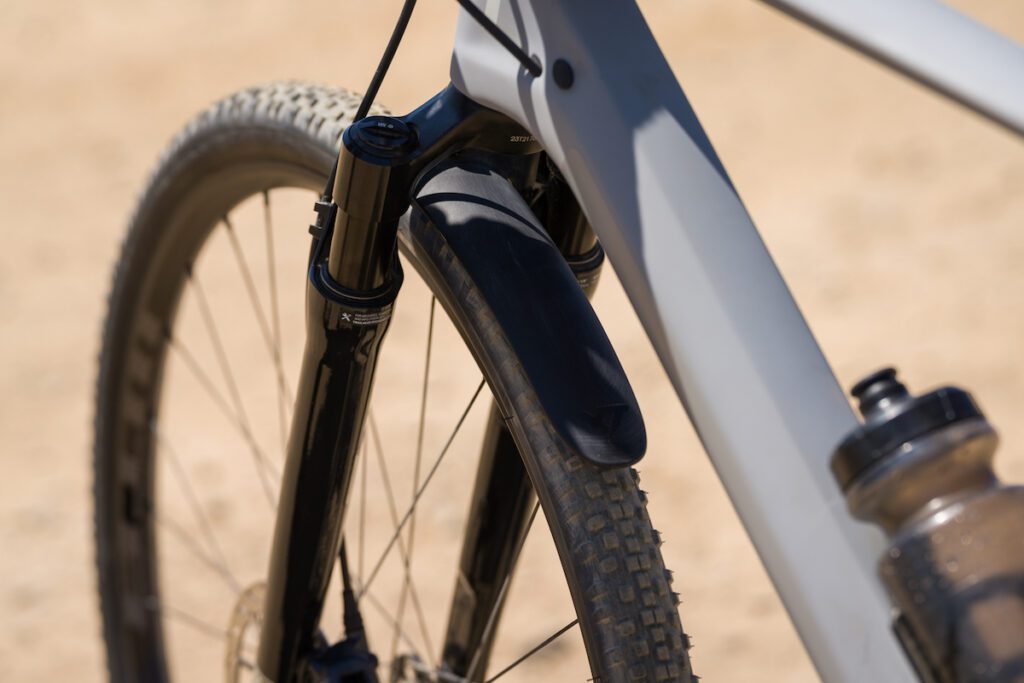 YT made a matching fender for the fork. 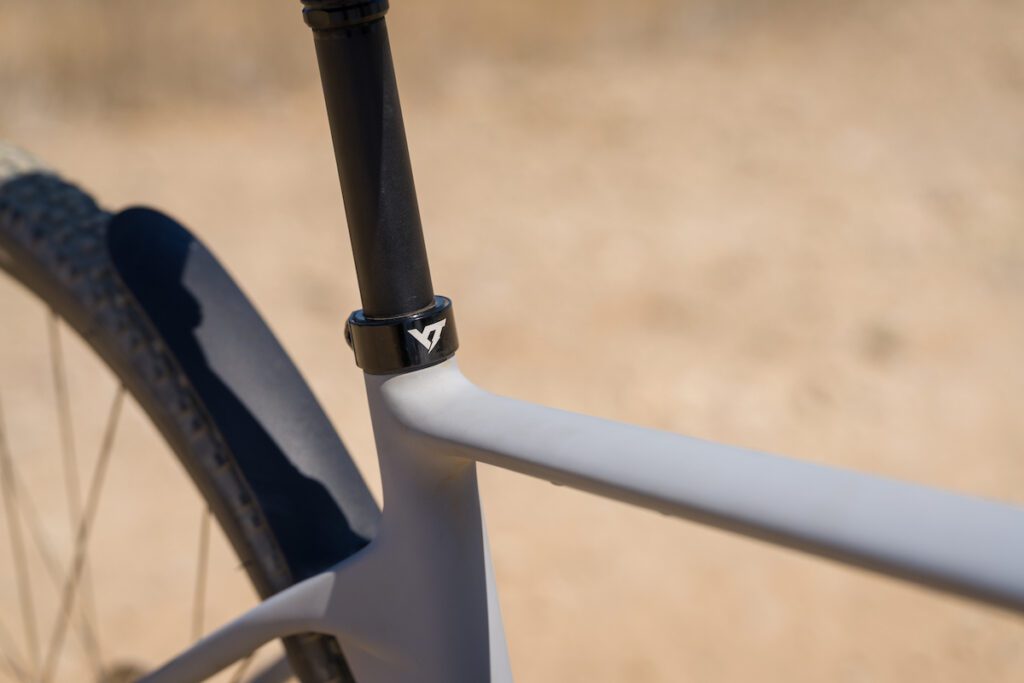 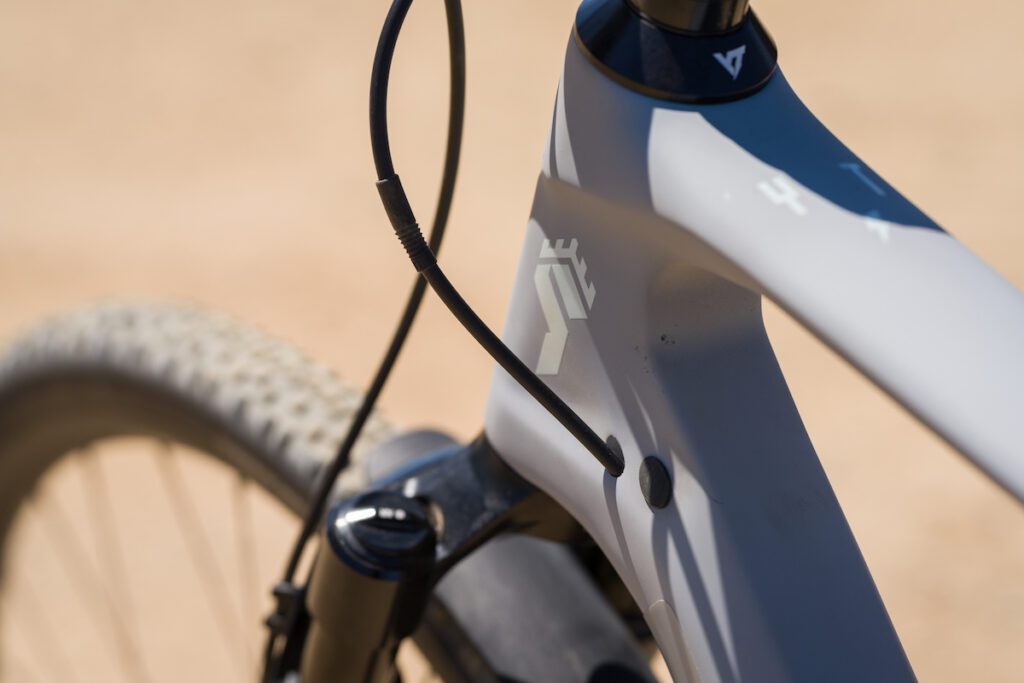 Both Szepter models come with AXS, but there are ports and routing for cables. 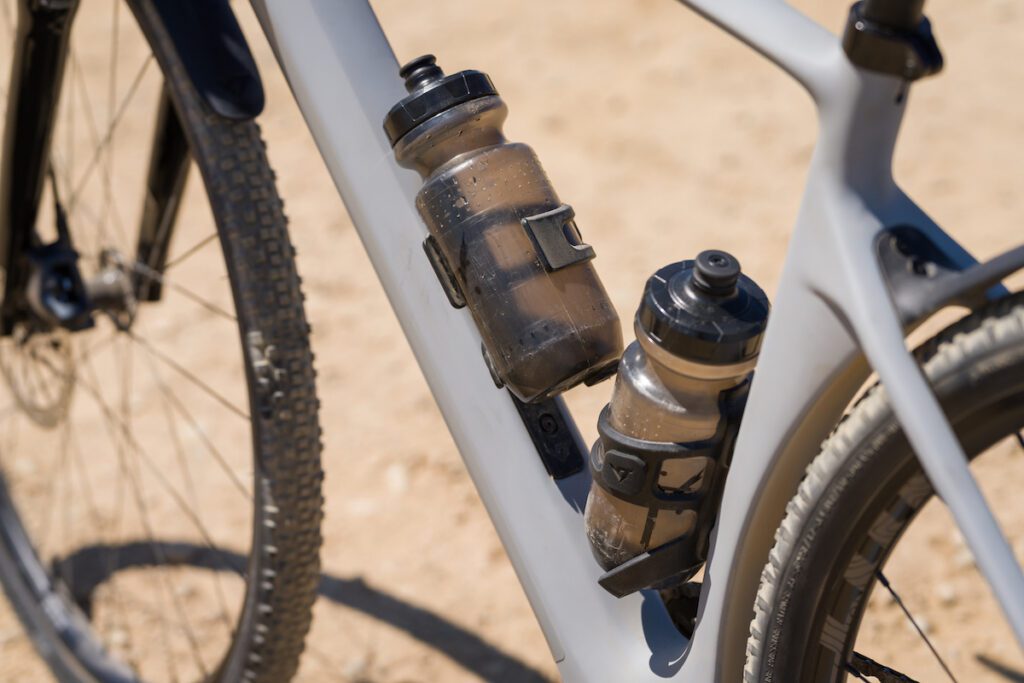 Room for all kinds of stuff in the frame 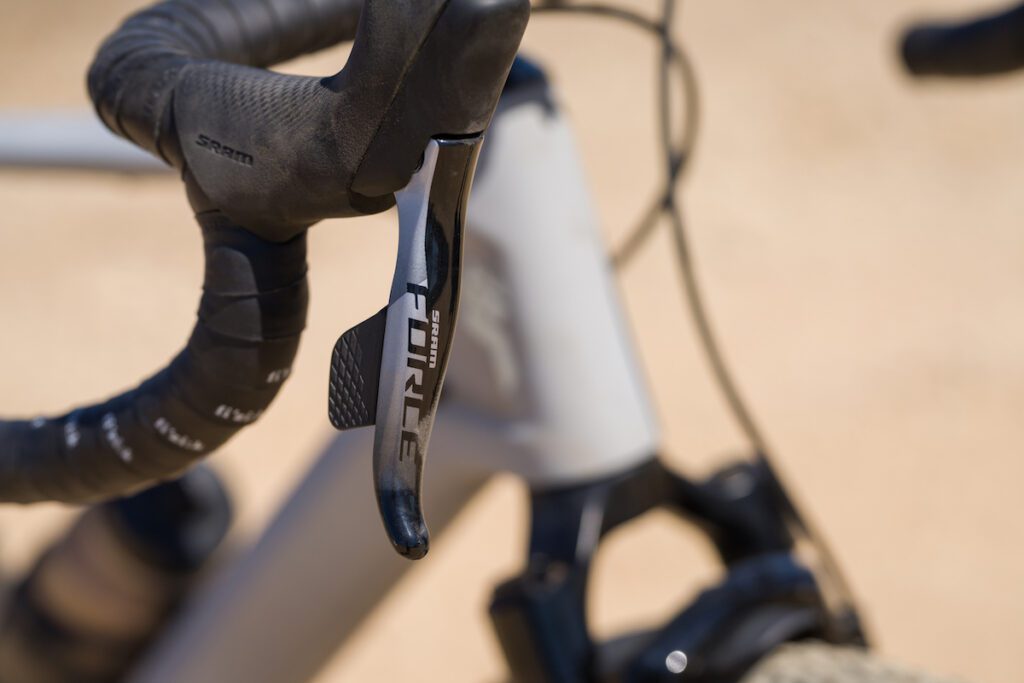 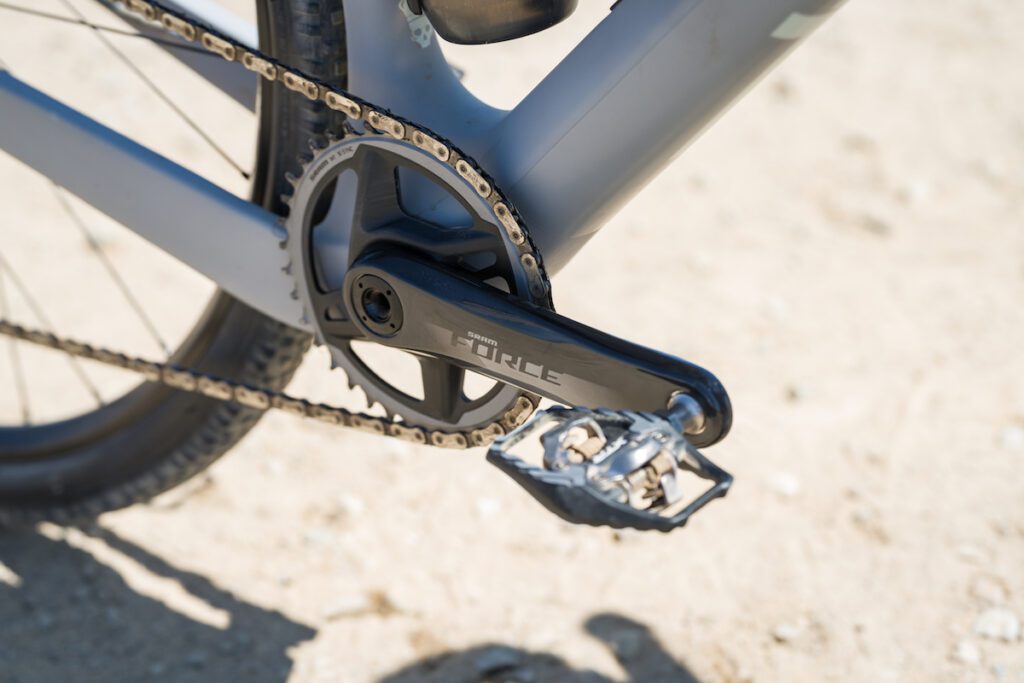 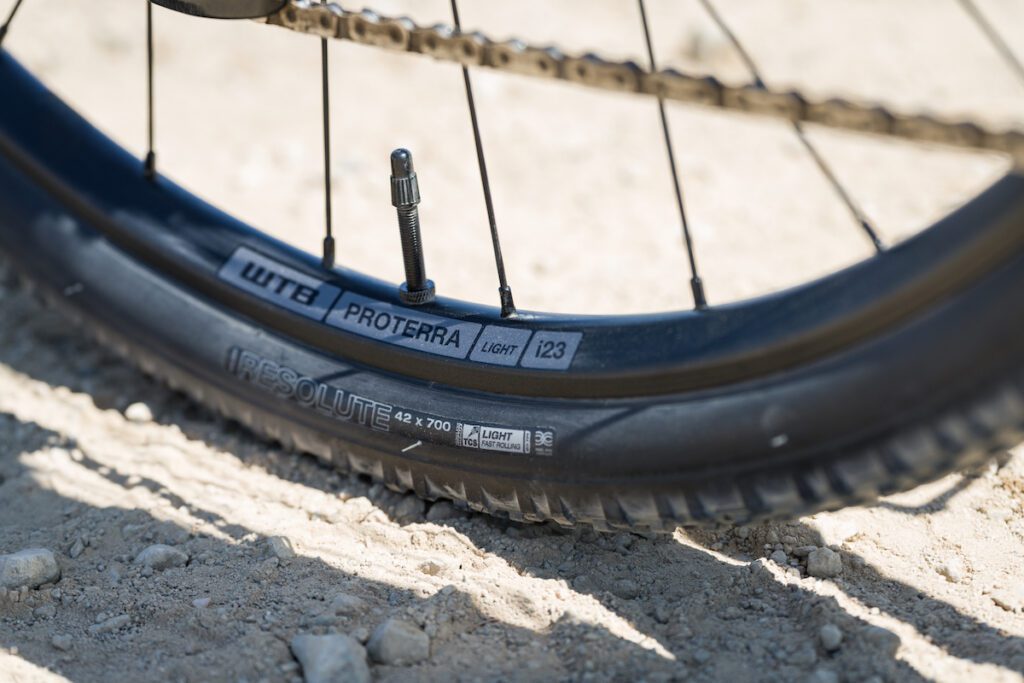 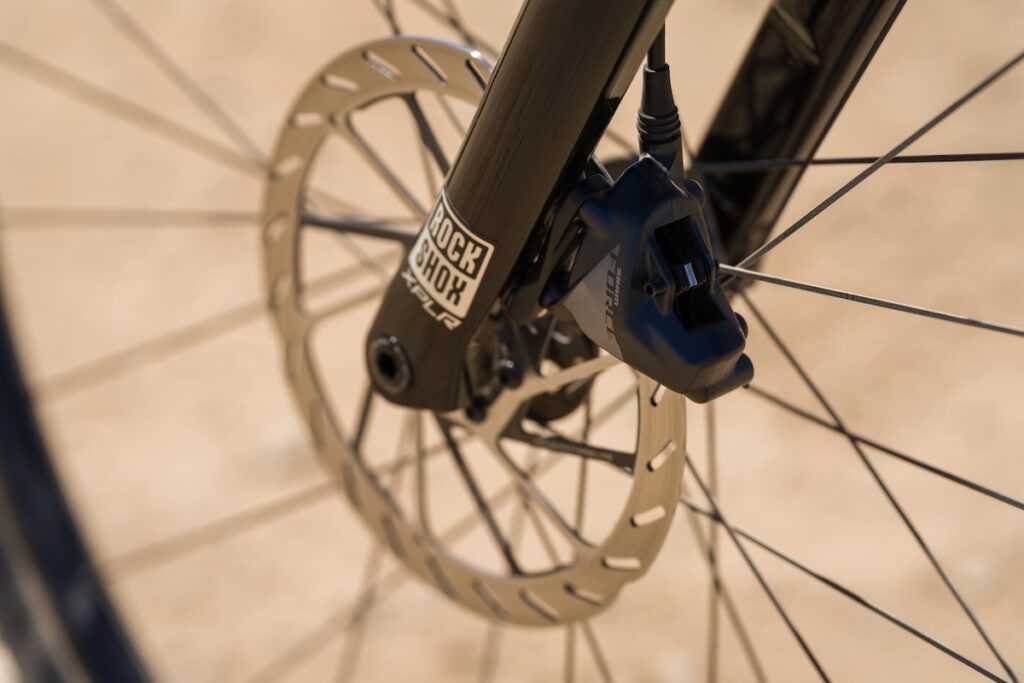 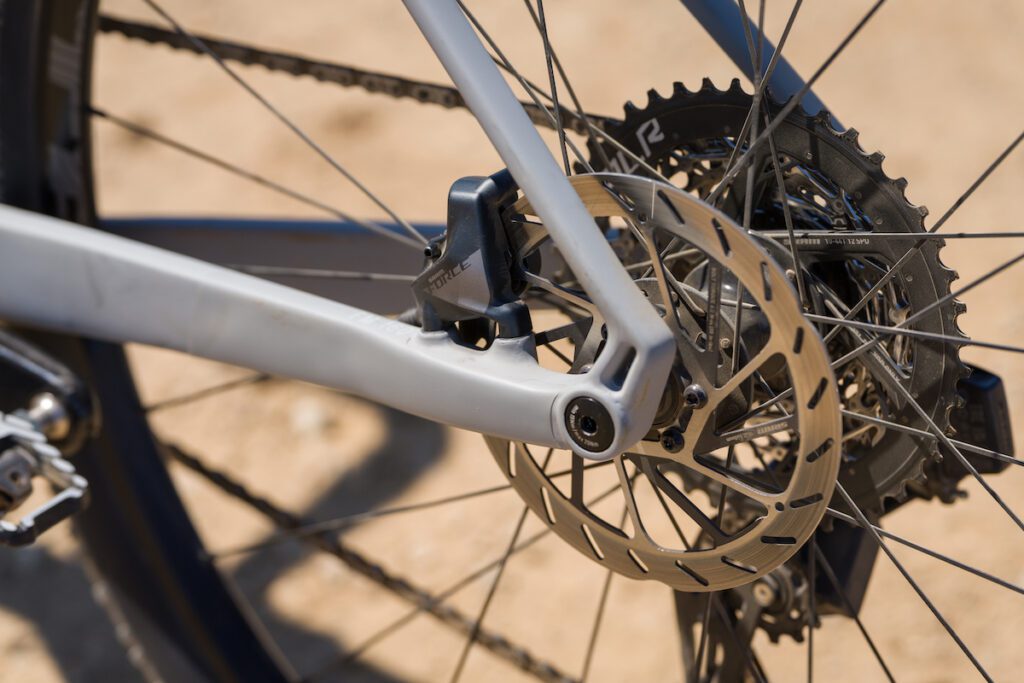 The rear drop-outs are desinged to give some compliance, with thin seat-stays, with boxy chainstays that aim to preserve power transfer 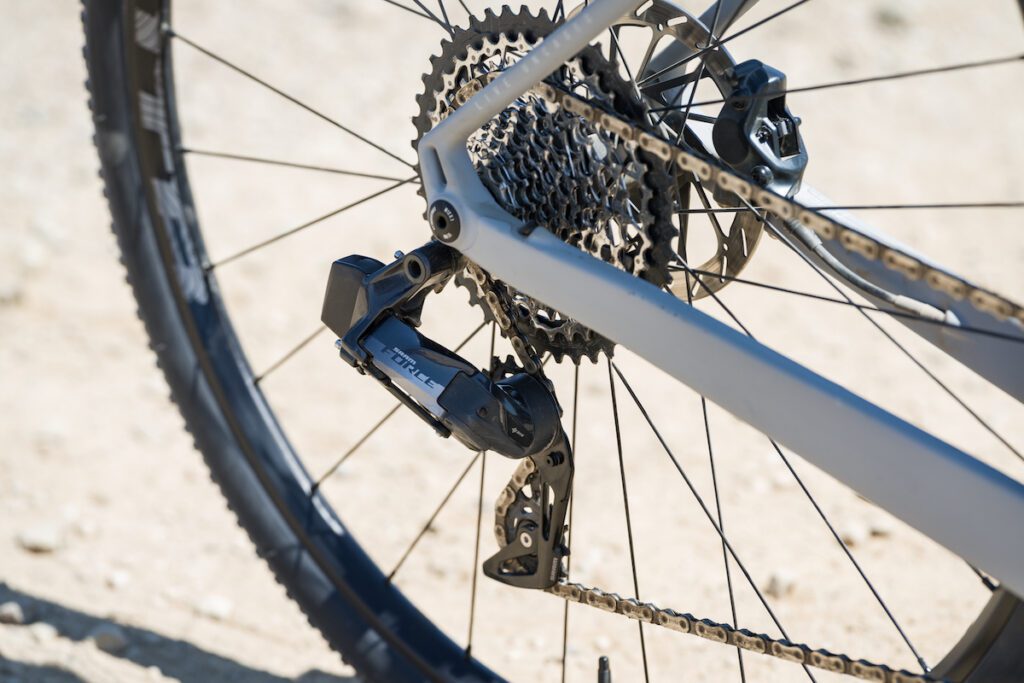 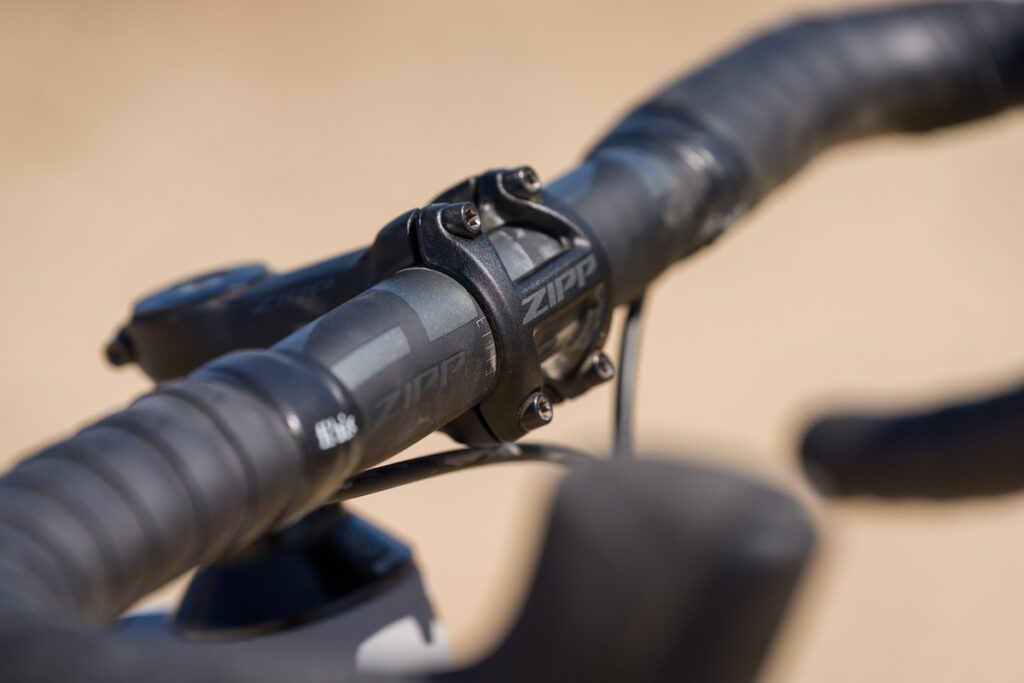 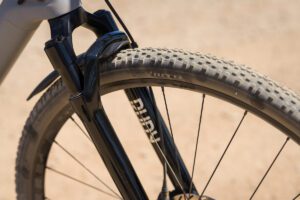 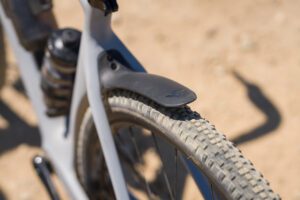 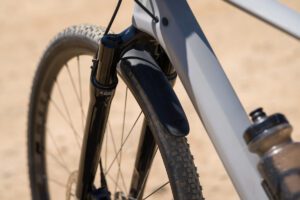 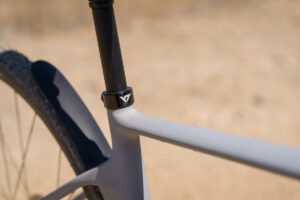 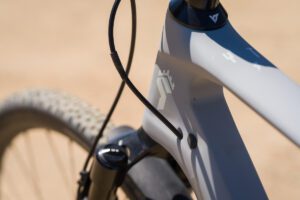 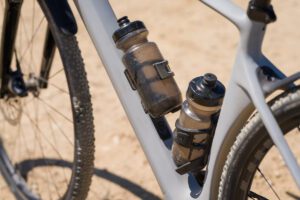 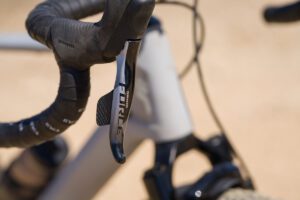 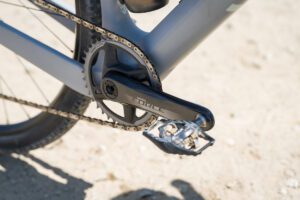 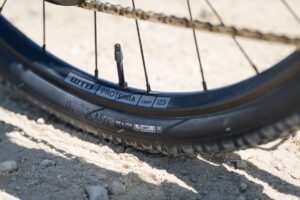 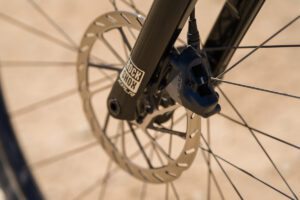 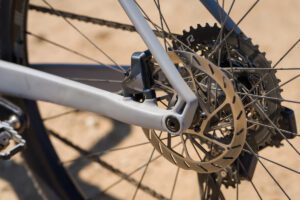 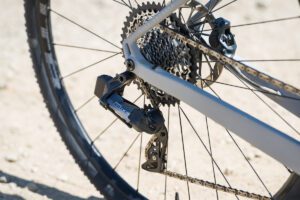 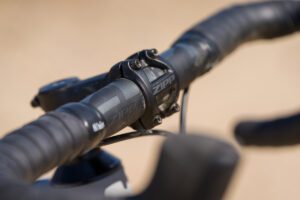 YT specs the Szepter with 42mm tires (max-clearance is a conservative 45mm.) Compliance should come from the frame, not from tires, YT said when asked why there isn’t more room. There are also size-specific handlebar widths and a smaller 38-tooth chainring. The frame is 1x only, a sacrifice to get the short chainstays. Szepter’s carbon fiber frame isn’t light at 1,400g but it is certified ASTM Class 3. This allows riders to safely hit small jumps, though YT is careful to add that current components on the Core 3 model may carry less tough certifications.

Other frame details include neatly integrated mini fenders, designed specifically for the bike by YT. Unfortunately, there’s no option to run full-fenders. YT was confident in this decision when pushed but, as a west coast B.C. rider that rides in the rain quite a bit, not being able to put full-wrap fenders is an odd choice for a gravel bike. There are also two mounting points on the top tube, another set of rivets on the down tube for on-bike storage. Three water bottle mounts give you choice of where you position your water bottle cage in the frame, to avoid bags or to sit higher for better reach.

YT ships both Szepters with SRAM’s wireless 12-speed EXPLR eTap AXS drivetrains. That’s Force AXS on the Core 4 and Rival AXS on the Core 3. The 38-tooth chainring matches to a 10-44 cassette for a good range of gearing. WTB alloy wheels aren’t light, but add to the Szepter’s smooth ride on rough roads.

When YT introduced us to the Szepter in California, they wisely had us ride the bike before showing us any details. We had time to adjust the bike to fit and a very brief run-down before hitting the trails near YT’s Mill showroom. After hitting a sequence of fast, flowing green and blue trails, we headed back for lunch and a more in-depth look at the Szepter.

After feeling how well this gravel bike handled on singletrack, and it does handle really well, and hearing YT’s explanation that it was very much intended to be comfortable on some singletrack, everyone in our group expected much more extreme geometry numbers. Something in line with Evil’s Chamois Hagar. That the Szepter is much more restrained, and is so immediately easy to get along with, is (more) proof that geometry is about how the angles complement each other, not one specific number. And maybe also proof that even 40-mm suspension forks can have a big impact on how confidently a gravel bike handles.

That steeper, 74.4-degree seat tube angle does give the Szepter excellent climbing traction, even on steep, dusty California singletrack or through deep gravel. It is a comfortable climbing position and easy to keep the power on without losing traction. The downside is, just like in mountain biking, on flat roads it does push your weight onto the bars more. This is fine for a couple of hours but anyone planning on much longer, or flat, faster rides might not like the extra fatigue. 74-deg isn’t extreme, but it does make a difference.

The first ride also made it clear that YT designed the Szepter to be more comfortable when your hands are securely in the drops. The Szepter does have an increased stack height, compared to more race-focused gravel bikes. YT says it was the plan to have a more upright, comfortable body position.

It’s no surprise that YT made a gravel bike that is comfortable on trails. The bigger test is how it handles on less extreme terrain. Our rides included everything from beach cruises to rough gravel, singletrack and one absolutely incredible, twisting, roughly paved descent on Catalina Island. On roads, the Szepter is actually quite balanced, comfortable and fun to ride fast. The more upright position adds some confidence on looser gravel corners. But it is not intended to be as aggressive or fast-steering as a more race-focused design. But it is a position that will be more immediately comfortable to mountain bikers than roadies crossing into gravel.

Who is the Szepter for?

YT is clear that it designed the Szepter for mountain bikers looking to get into gravel or cross-train. (It’s the only gravel press camp I’ve been on where there were more people on flat pedals and baggy clothes than there was spandex on clipless shoes). It’s also a bike that makes commuting or just ripping around on rides that mix roads, trails and singletrack more fun.

But the appeal of the Szepter is much wider than that. It may not be perfect for riders aiming for Belgian Waffle Ride, Unbound, or road racers looking for something just slightly more capable off-road. Making the Core 4 tough enough to match the design does make it a heavier bike, at 9.9kg. But, for anyone who wants to mix rougher gravel or singletrack in on their daily rides, and doesn’t really care about getting aero, the Szepter is fun, comfortable in a wide range of conditions, and ready to go basically anywhere you want. 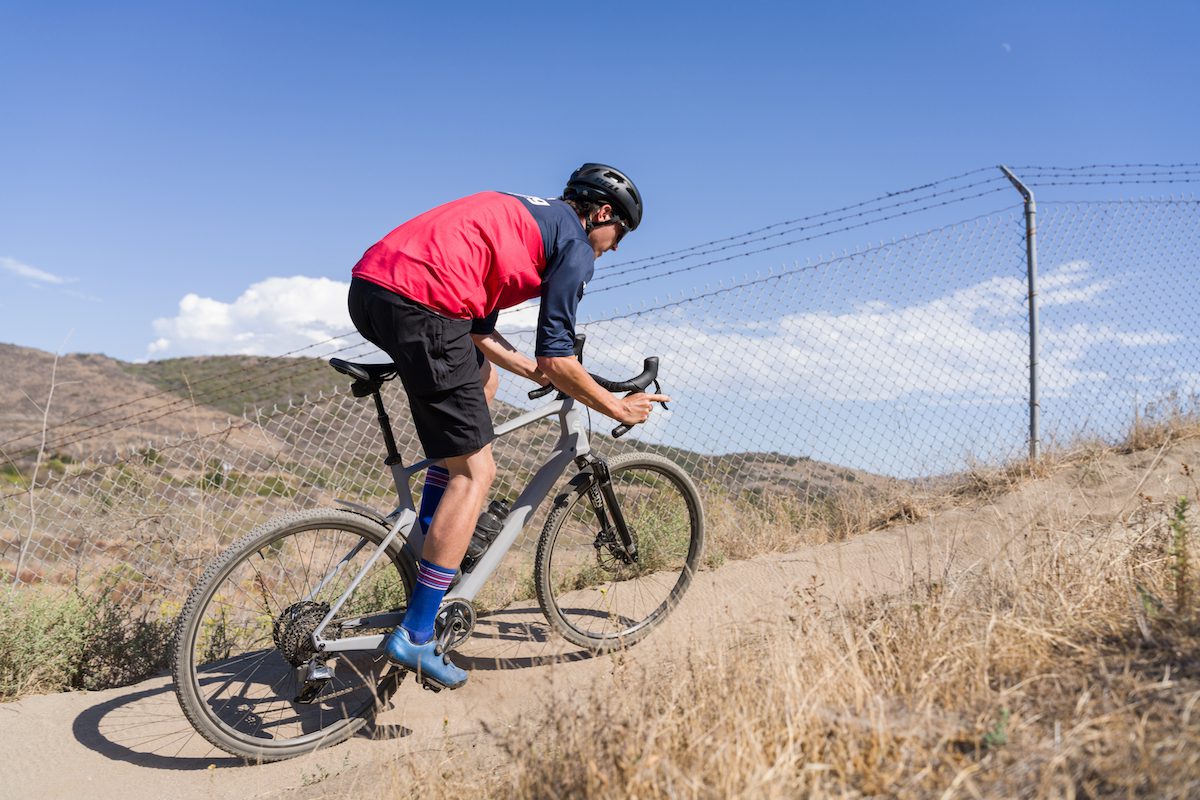 The Szepter is at once more restrained than you would expect from a gravity brand making its first gravel bike, and proof that a bike doesn’t have to be extreme to be really fun off-road.

At $6,300 for the Core 4, which comes with SRM Force eTap AXS, a RockShox Rudy Ultimate Explr fork and RockShox Reverb AXS dropper post, it’s impressively priced. That’s less than a comparable Canyon Grizl (and the YT comes with a droper post) and solidly below what most major brands are asking for similar bikes. The Core 3, which loses the dropper post and moves to Rival eTap AXS and RockShox Rude Explr comes in at $4,600. YT’s direct-to-consumer business model definitely has an impact on pricing.

Szepter won’t be for everyone. Its main appeal is that it doesn’t try to be. It is unapologetically a mountain biker’s gravel bike. It’s also not perfect (especially if you have strong views on fenders). But it is impressive, especially considering it’s YT’s first drop-bar effort, that it is so immediately comfortable and fun to ride.