Right after she won her first national championship jersey since 2019, Canyon’s Emily Batty had this to say: “It was a perfect weekend.” And although there are still the relay events Sunday, she’s not wrong. On Saturday, there was some incredible XCO racing at Hardwood Bike and Ski in Oro, Ontario.

The race featured some short steep climbs and some longer (by Ontario standards) hills on the historic Hardwood course (the 25th national edition) but the big factor was the heat. The temperatures were in the upper 30s and in true Onterrible style, it was humid beyond belief. Most riders wore ice vests before the race, and even the organizers made sure to bring riders up to the starting grid just in time to prevent overheating. 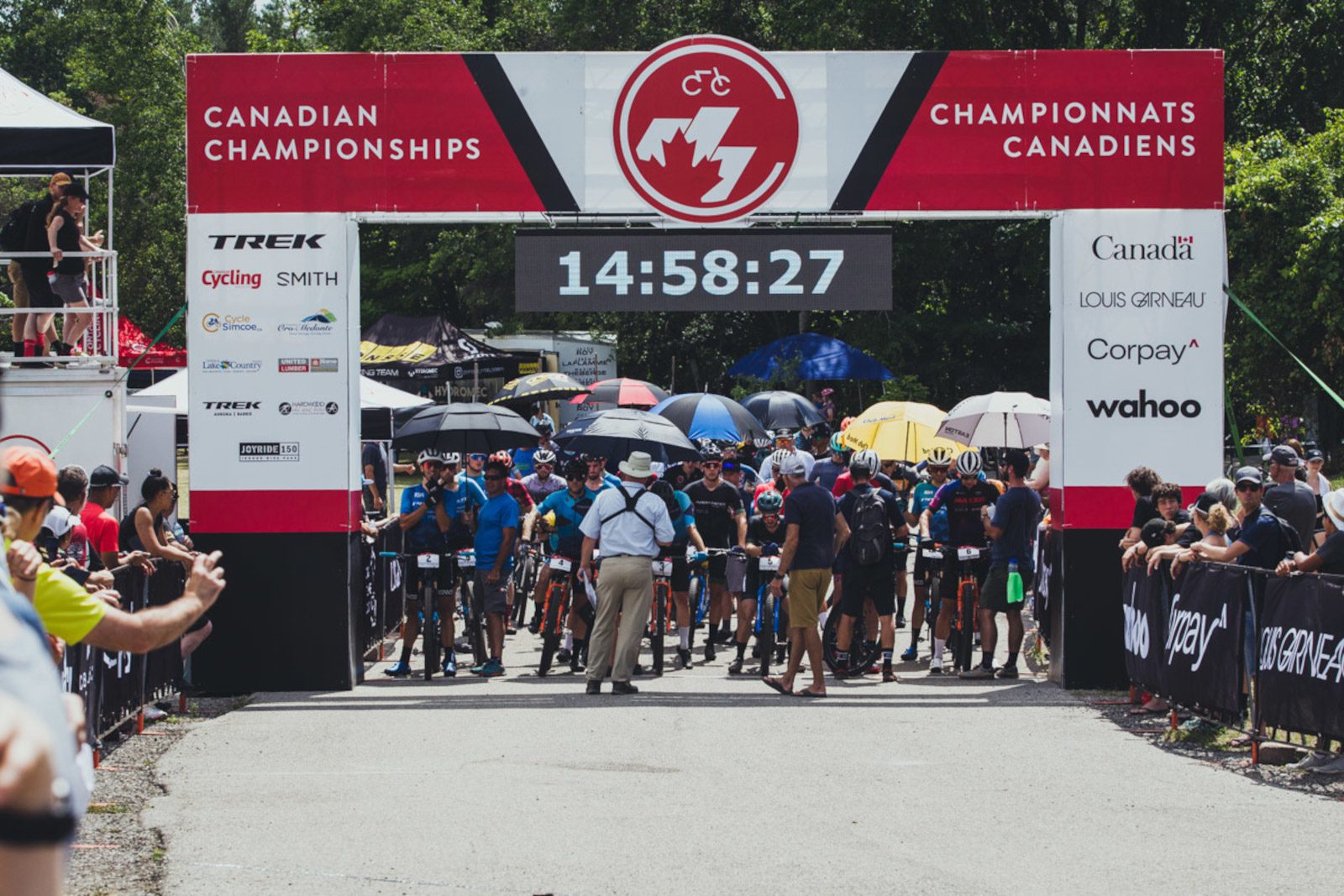 It wasn’t just the weather though, the racing was hot and spicy and full of action.

Quebec’s Jacob Roy got the win and spearheaded a Quebec podium romp. 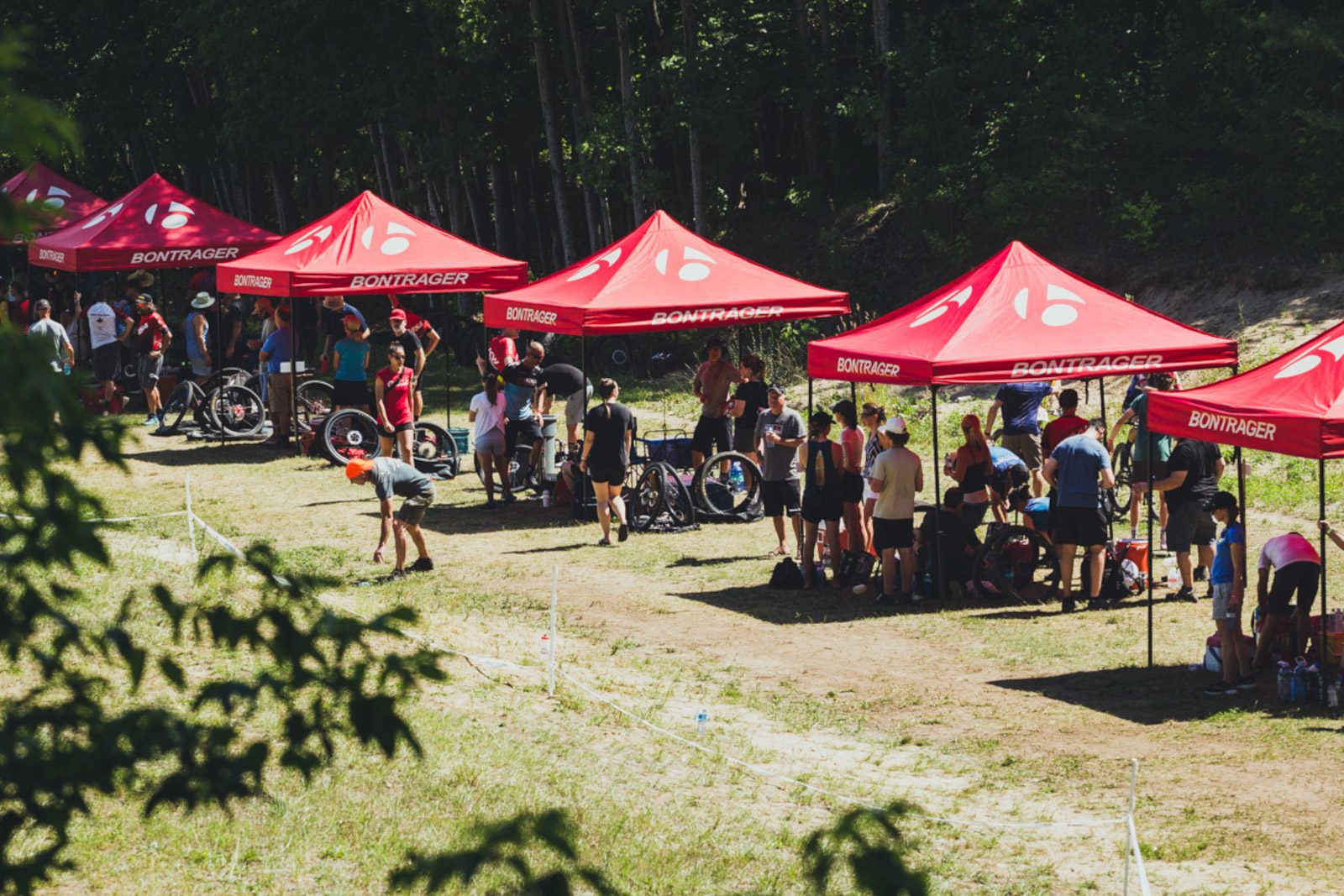 Just like Roy, Rafaelle Carrier led a three-woman QC sweep in the u-17 women’s race.

Stimulus-Orbea proved they are the junior team to beat, sweeping the podium. Marin Lowe took the win with the Holmgren sisters flanking her.

After an early crash, Batty found herself in second, behind her teammate Laurie Arsenault. But once she got going again she would power through and overtake Arsenault, with her teammate and last year’s champ Jenn Jackson coming in third and creating the second Canyon podium sweep this weekend. Arseneault led the team in a take-over of the women’s XCC podium earlier in the weekend.

After the race, Batty said she couldn’t be happier to wear the maple leaf. “I am so grateful for today, and to see our team have such a great day. Just a perfect weekend,” she said.

Emilly Johnston (Norco) had a very strong start, but would be forced to withdraw on the final lap due to the extreme heat. After that Marianne Théberge would take over the lead, taking the win over Jocelyn Stel and Roxanne Vermette.

Carter Woods was the strongest from the first lap–he was so fast that his times would have placed him in at least the top-four of the elite men’s race. He even caught up to last year’s elite winner, Léandre Bouchard who started two minutes ahead. For Bouchard, it was an impressive effort to try defend his jersey while recovering from injury. It is one of the Alma rider’s first races back after a high-speed crash in Brazil.

“I find Ontario heat is a little bit different. It’s super humid,” Woods said after. “I come from dry heat and BC. Tt’s different here than in Victoria. Yeah, for sure. Something we can’t get used to in the week here. I was just doing dump bottles every lap, as it was super hot. On a high speed course you can keep the wind on your face, but I needed that water.”

Carter Woods wins the u-23 national champs with an amazing race pic.twitter.com/WdoTLIk4Nz

Norco’s Peter Disera took a huge win in a dramatic elite men’s race which saw his brother Quinton Disera and Tyler Orschel duke it out. Orschel would lead early, but the Disera brothers fough back. Ultimately it was Peter who would power ahead on the crest of the main climb and keep his lead to take a well-deserved win. Disera said the heat was definitely a factor, but he knew he could take time if he pushed hard at the hardest spots of the race, which he did. “I didn’t panic when Tyler broke away early, I stayed calm and focused on the race. I was so happy to see my brother there with me in the mix. He had a great race. This used to be home course but this style of riding where I now live in Victoria is not quite the same. But it was a great day today, for sure.”

You can see the full results on RaceTiming.ca