Cory Wallace was supposed to be on the African continent for weeks, not months. After racing the Cape Epic to a top-20 finish in October, the Canadian endurance racer stayed around for another stage race. Then Omicron arrived, bringing international travel bans with it. Wallace was trapped in South Africa.

“The plan was Cape Epic, then a week of dental work and go home,” says Wallace. “Lachlan Morton and I were on a ride one day when we heard the flights were being cancelled. He got the last flight out. I missed it.” While Morton was on his way out, he gave Wallace his entry to the Munga, a 1,1150km race across remote regions of South Africa. From there, the trip just grew. “A South African team invited me to a race in Namibia. Then I did want to go home, but there was no way. The only option was Tanzania.” 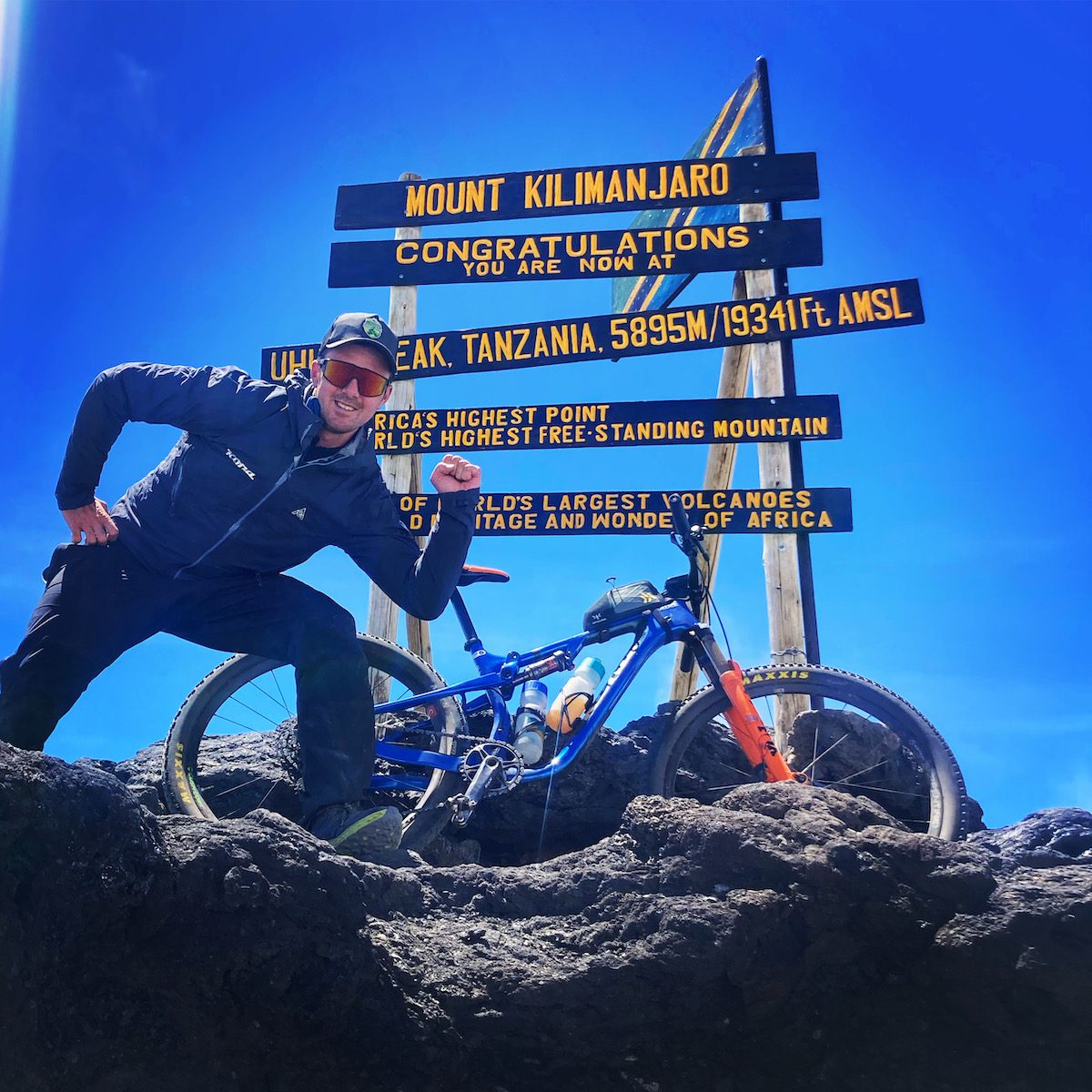 Since Tanzania was a so-called “green country,” Wallace just needed to quarantine for two weeks before he could return home to Canada. After meeting some new friends, and settling into training and life on Zanzibar island, Wallace cancelled his return flight, celebrated New Year’s Eve, and set a new goal: a FKT on the 5,895-metre summit of Mount Kilimanjaro.

After successfully summiting Kilimanjaro, twice in three days, Wallace decided to keep going.  Through a few race connections, Wallace turned a couple of weeks in South Africa into one of the most remarkable training camps ranging across the African continent.

“This whole trip has been a faint plan, nothing’s set in stone. If a place is cool, I’ll stay longer. At one point, I was in the Usambara mountains, up at 2,000. It was just full of good single track and dirt roads. I found this sweet lodge to stay at on the edge of a cliff. So I stayed there for nine days. So yeah, whichever way the wind blows.” 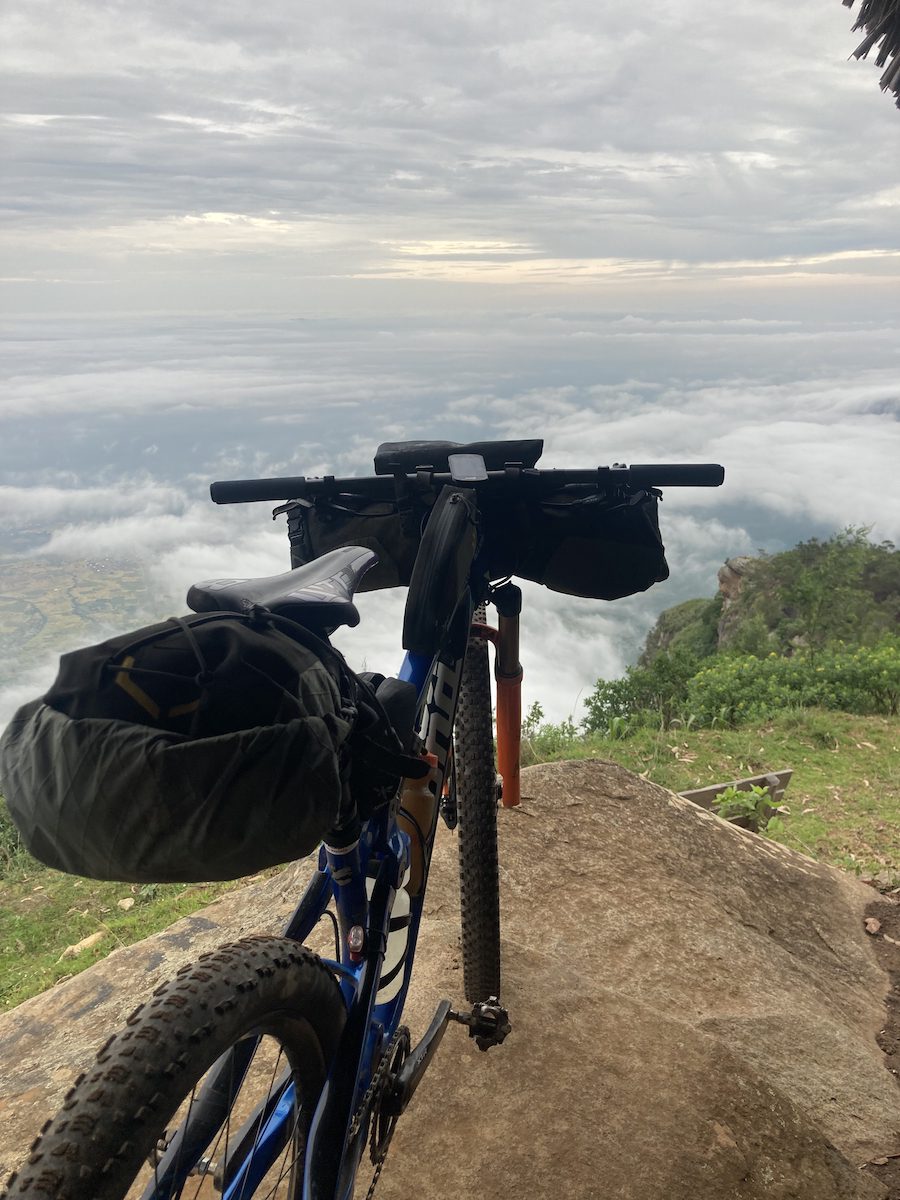 One of his race partners in Namibia, at the Wine 2 Wales, was Adi Enthoven. “I didn’t realize until after the first race day, but he runs, like, 30 companies in South Africa. Adi and his brother are taking over his dad’s businesses, so right then, the trip changed.”

Enthoven not only set up a place for Wallace to recover in comfort from some dental work gone awry but put the trip on a very different course. After his Kilimanjaro FKT, set out on an unforgettable bikepacking trip with Enthoven’s help.

“Adi runs a string of safari lodges in Tanzania. So he set me up with his partner and said, basically, ‘we’ll look after your lodges, if you can get to them.'” says Wallace. “So I’m just biking around to these four-star lodges. We went to one in the Ngorongoro Crater. And I’m off to the Serengeti, then up to Kenya to Maasai Mara. So, yeah, just kinda safari bike touring around.”

Of course, bikepacking to some of the most remote and wild places on earth, full of dangerous predators, isn’t your average bikepacking trip. Even for a Canadian that grew up in the wilderness of Jasper National Park.

“I have to really feel it out,” Wallace explains, calmly, as if it’s a ride through Vancouver’s Stanley Park not the African wilderness. “The first lodge, they had to pick me up at the entrance to the park, because they don’t allow cycling. I saw so many zebra and wildebeest that I stopped counting. I ran into three baby giraffes, a couple of jackals. It’s been a full safari, it’s pretty wild”

During the day, Wallace says there were enough of the local Maasai around that the wildlife stay away.

“At night is when they all come out. I don’t want to bump into a lion or elephant, I have no defense. But it’s more the monkeys and baboons, honestly, they get pretty aggressive.”

When I talked to the Canadian over a patchy WhatsApp call, he’d just set up camp for the night before biking into the Serengeti reserve the following day. Most reasonable people would be unnerved by riding through remote areas surrounded by unfamiliar and potentially dangerous wildlife (even by Canadian standards). Wallace was in his element. It turns out even he has limits, though.

“It was getting kind of late in the day, so I just stopped,” says Wallace. “I didn’t want to bike into the Serengeti at night.” 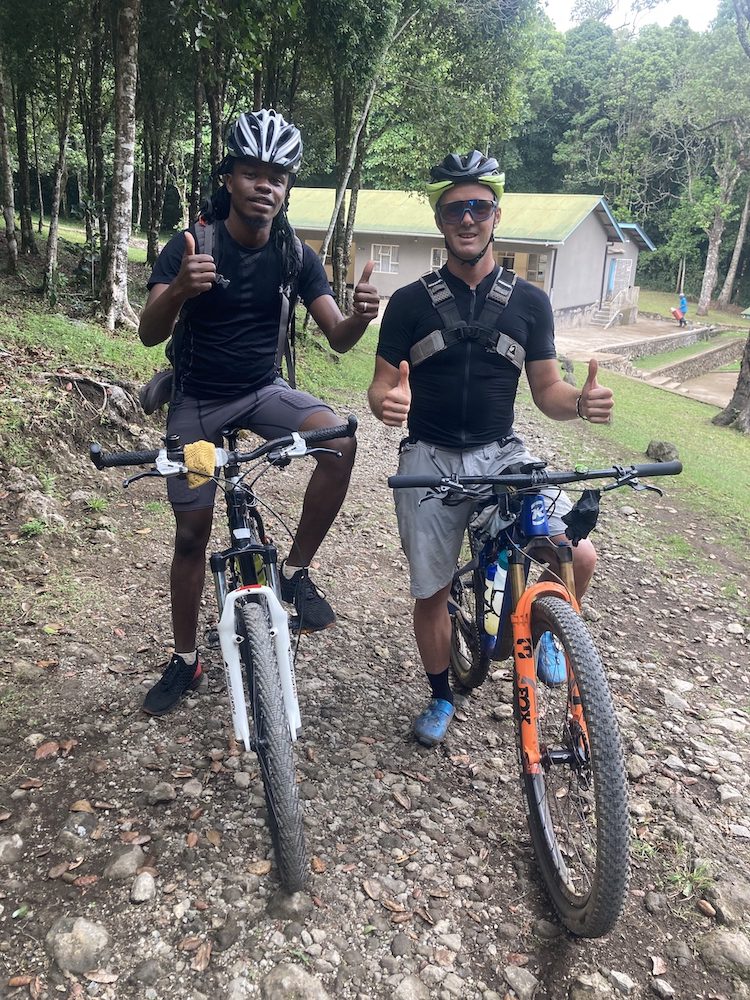 The Canadians’s since returned to Canada, then headed back over to Finale Ligure, Italy where he is aiming to defend his 24-Hour World Championships title. With the race returning for the first time in two years, part of the African expedition was finding a way to get proper training for that event. Enter Mount Kilimanjaro. While most mortals would consider just summiting the world’s tallest freestanding peak once, on foot, a goal in itself, Wallace did it twice in three days.

“I needed to get going on base miles, and I’ve always enjoyed bike packing as a way to do that,” Wallace says of his successful FKT ride. “So, two birds with one stone: Base miles and Kilimanjaro.”

While Wallace is characteristically casual about the ride, he did have some trouble finding local’s that shared his vision.

“For Kilimanjaro, you have to have a guide and porters and a cook, the whole outfit. It’s a bit of a gong show,” Wallace says adding, with a laugh, “I actually had to go through four or five different guides. The first four just kinda laughed at me and told me it’s impossible. I got a lot of resistance.”

Another traveller put the Canadian in touch with Paul Shayo of Shayo Trekking. Wallace explained his plan and Shayo said he’d make it happen.

From there, all that was left to do was ride. And find gear.

“I didn’t really have too much stuff with me. I had to go shopping at the local market in Moshi, at the base, for a backpack, gloves and pants. Basic stuff. For a while, I thought I wouldn’t do it because all my good gear is at home. Then I figured, whatever, I’m here. I have my bike, which is the most important thing.”

His guide also had a bike, but it wasn’t exactly the carbon fibre Kona Hei Hei that Wallace was riding.

“The guide’s bike was from the 90s. Vee brakes, 1.5-inch bald tires. We biked for 5 minutes and I was looking at him, ‘this isn’t going to work, we gotta fix your bike.'” says Wallace. “I adjusted his saddle height, tightened some bolts and made sure the bike wasn’t going to fall apart on him. It was 3 hours up to the top, so I just told him we’d meed up there.”

Wallace set up at the 4,700-m Kibo Hut to acclimatize and scout the route. Since he was travelling by bike, and didn’t have winter clothes, he set a different schedule than most.

“The normal thing is to wait till midnight, then hike up. In the middle of the day, no one goes up. So we had the whole mountain to ourselves. Then at midnight, 40 or 50 foreigners and their guides took off up the mountain. Just a traffic jam. They all came stumbling down in the morning the next day, just frozen and totally bagged, it was pretty funny.”

After scouting the peak, Wallace descended down the park gate for the night to start his FKT attempt. Just under nine hours later, he was back at the park gate having set a new record.

“I lucked out with the weather, it was the perfect day. Up top, it was like 6 degrees, probably the warmest day all year.” 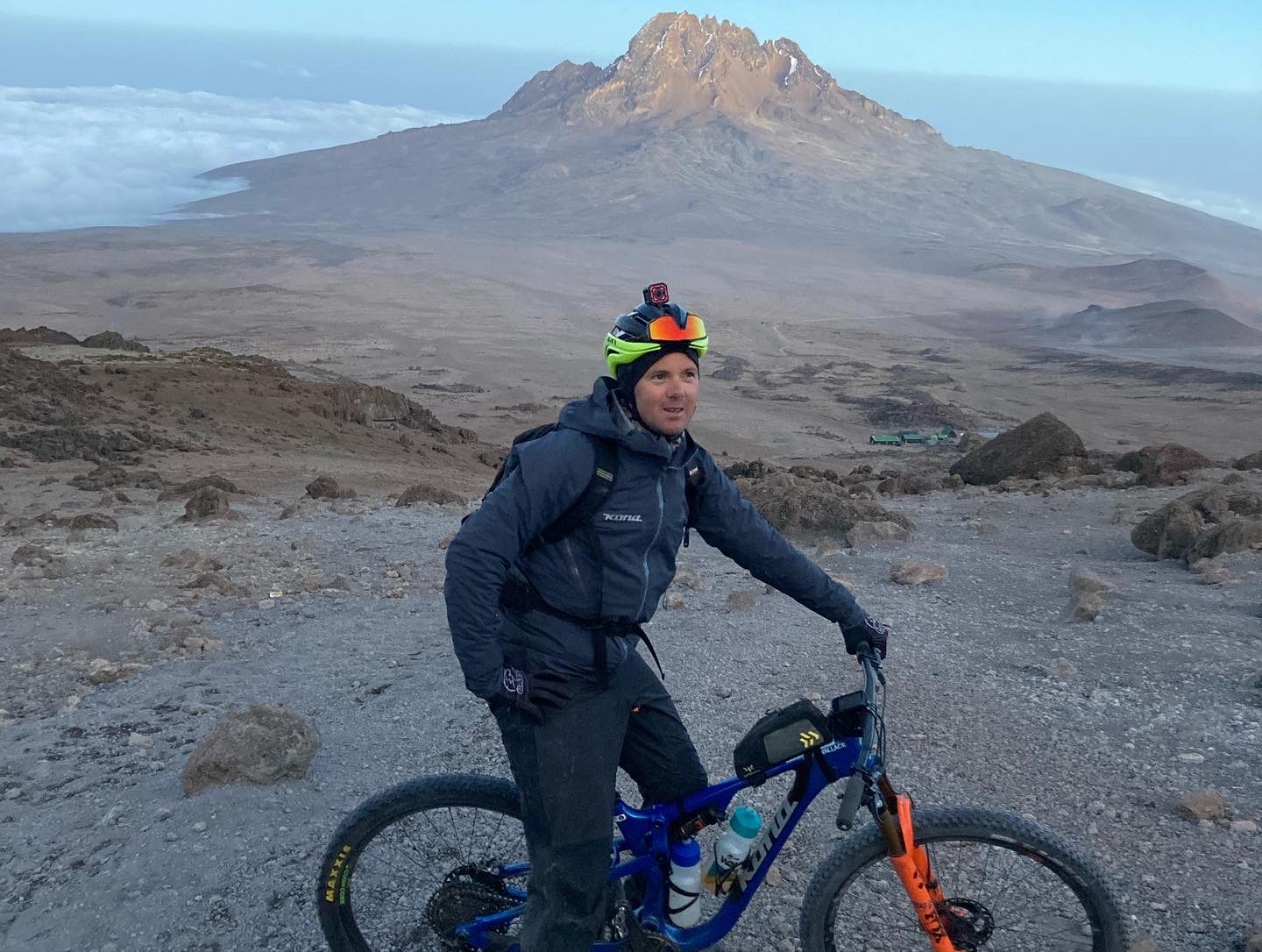 The route, scaling the side of a volcano, meant a different FKT than others Wallace has attempted in the past. From 4,700m up to 5,700m, the Canadian was on foot for a three-hour hike-a-bike. After another half-hour on foot back down, he was able to ride out the rest.

“I had to walk about 20 min back down these rocky ledges. Then it hits this crazy scree slope that you just bomb down. It’s kinda wild. Then you get 10-km of singletrack before jeep road to the base.”

“The ride experience is pretty … average,” Wallace admits. “It’s not like Nepal, where you’re on singletrack the entire time. It’s a crazy experience though. Up top, you’re surrounded by glaciers. An hour and a half later you’re in the jungle. I’ve never experienced that big of a contrast before.”

After continuing on to Kenya, Cory Wallace returned to Canada for final training and preparations for this weekend’s 24-Hour World Championships. The always-moving Canadian in Finale Ligure and on course in a quest for a fourth consecutive title.