When Rachel Atherton’s name appeared on the start list for this weekend’s Fort William World Cup it caused a stir. The six-time world champion had not yet announced she would be returning to racing after an extended hiatus due to injury, then time off to give birth to her first child.

Atherton took part in a Red Bull athletes training camp at Dyfi Bike Park in the weeks leading up to Fort William, but didn’t race the recent British Downhill Series event at the iconic Scottish venue.

Anticipation that Atherton might be back between the tape soon started ramping up when her name was included on the start list for Fort William World Cup. Rachel soon quieted race rumours on social media, saying she was not yet ready for World Cup racing. 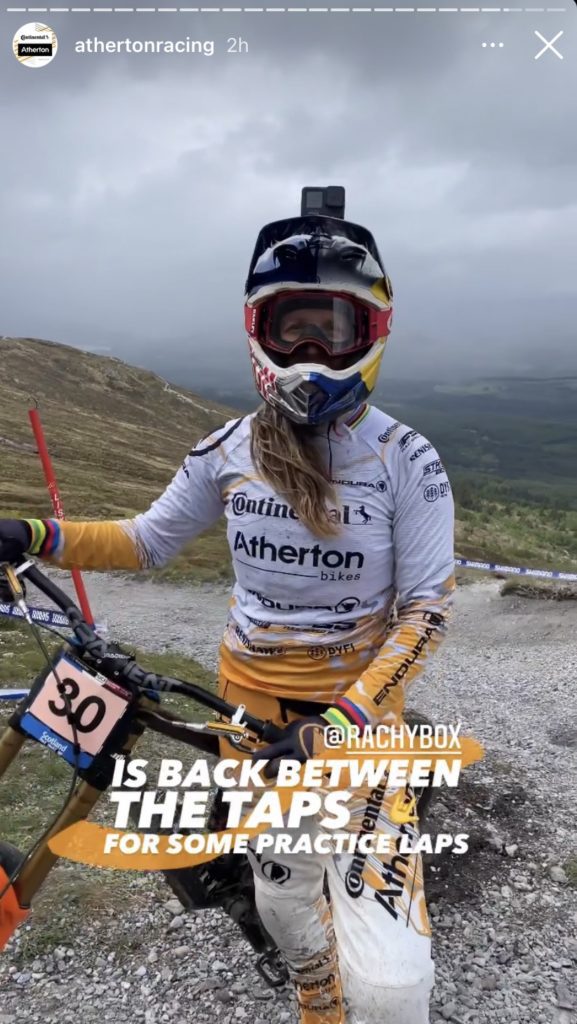 The rumour mill started back up when Atherton was seen out riding during practice in full race kit on Friday.

“It’s sick so far. It’s sketchy and I’m terrified, but it’s really good,” Rachel shared on the Atherton Racing Instagram stories. “Practice is so hard, though, so now I need to do loads of weight training before I race properly.”

Sounds like the fire to race is burning as bright as ever, but we might have to wait for at least one more round before Atherton rolls out of a start hut for a race run. Which is fair enough. The Fort William track is notoriously long and physical. It’d be a brutal track for a first race back, though Atherton would have the home-track advantage.

No matter what happens this weekend, it’s exciting to see Atherton back on a bike at a World Cup.

The last time Atherton raced was back in 2019. That was in Vallnord, Andorra, where she landed her 39th career World Cup win. The quest for 40 wins was put on hold just days later when she ruptured her Achilles in training for the Les Gets World Cup in France.

Rachel Atherton’s brother, Gee Atherton, is also currently on the World Cup sidelines. Also a downhill world champion, Gee was seriously injured in a crash for his film project, The Knife Edge. He’s since updated that he’s back on the bike and is adjusting his career plans following the crash.