Bear Mountain Canada Cup may be an “early season” race but, with most of Canada’s national team in attendance and warm, dry conditions, riders were flying around the updated Victoria cross country course.

Norco Factory Racing continued its fast start to 2019, with Peter Disera and Haley Smith taking the top podium step in the men’s and women’s elite races. 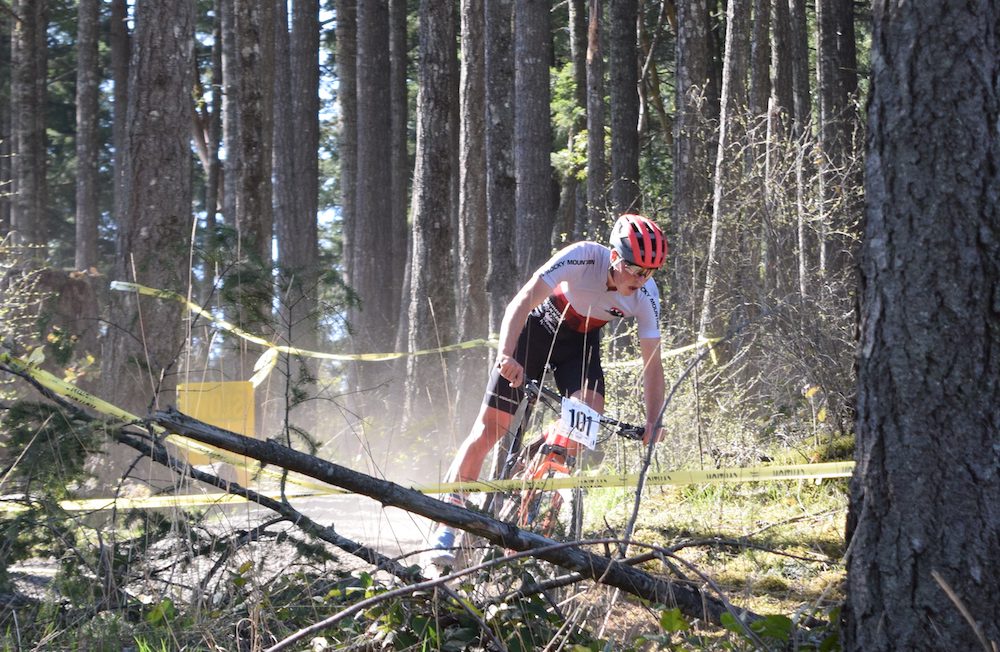 Haley Smith lead from the gun in the elite women’s race, getting to the awkward holeshot corner first and never looking back. Behind her, Olympic bronze medallist Catharine Pendrel chased solo to try close the gap. A group of three, including Sandra Walter, Jenn Jackson and under-23 national champion Laurie Arseneault were working hard to reel in the two leaders.

Smith’s lead continued to expand every lap, despite Pendrel’s efforts. As the Clif Pro Team rider drifted back into sight of the chasers, that group exploded. Arseneault took the initiative, creating a gap to Walter and Jackson behind. It wasn’t enough to catch Pendrel, but it was enough for a podium finish for the young rider.

A similar story played out in the men’s race, with Peter Disera filling in the part of the Norco Factory Team racer off the front for much of the race. It was his younger brother, Quinton Disera that led off the start, getting to the rocky 180-degree corner at the end of the start straight first. By half way through the first lap, it was the elder Disera on the front with teammate Andrew L’Esperance on his wheel.

A quartet of riders chased, with Raphaël Gagné, Gunnar Holmgren, Léandre Bouchard and Mark-Andre Fortier working together to try contain Disera’s lead. L’Esperance had dropped back through the field on the back half of the course, and would spend the rest of his race working back into a podium finish.

Gagné and Holmgren separated themselves to form a chasing duo, with Bouchard alone behind. In an exciting final lap, Gagné got a gap over the young Ontario rider, then Bouchard worked his way just in front of Holmgren to take third.

Carter Woods arrived in Victoria after winning back-to-back US Cup races in California the previous two weekends, and carried that momentum into the junior men’s race. Woods started creating a gap on the opening golf kart climb, which pitched up over 20% grades in places, and never looked back. By the end of his five lap race, Woods had made up a two minute gap to ride through much of the elite men’s field.

Behind Woods, the racing was much closer. A quartet of juniors finished within a minute of each other for second through fifth. Team USA’s Bjorn Riley claimed second, with Jeremie La Grenade third. Kieran Nilsen, who, like Woods and Johnston is also from the Comox Valley, finished fourth, ahead of Team USA’s Devin Debruhl.

There must be something in the water in the Comox Valley because the small area of Vancouver Island has created a gang of fast young riders. Emilly Johnston, the latest signing to Pendrel Racing, jumped out to an early lead in the junior women’s race and, like Woods, quickly set about hunting down the elite women that had started two minutes. Johnston won her race with a three minute advantage, and had caught top-10 elite racers by the time she finished her four laps of the fast Bear Mountain course.

Behind Johnston, a properly international field fought for the podium positions. Munro Madigan (Team USA) separated herself from a chasing group that stayed close together for much of the race. Quebec’s Magdeleine Vallieres Mill finished third, with New Zealand’s Ruby Ryan in fourth and Team USA’s Haley Randel in fifth.

Under-17 men and women

With numerous races on course at the same time, keeping track of the under-17 men and women’s Canada Cup races was difficult. Nicole Bradbury came out on top of the chaos in the under-17 women’s race, followed by Alberta’s Ella Myers, Mara Roldan (Dalbix Siboire / Yukon), Marie-Fay St-Onge and Jasmine Aspirot, both of Dalbix Siboire.