It was a day of firsts for Switzerland in the women’s XCO race on Tuesday. The trio of Jolanda Neff, Sina Frei and Linda Indergand carried out the remarkable, and unmatched accomplishment of sweeping an Olympic mountain bike podium. The Swiss success surely comes at the expense of the highly-anticipated French duo of Pauline Ferrand-Prevot and Loana Lecomte, both of whom finished outside the medals.

For Neff, the Gold medal is the realization of year’s of effort and promise. It is also an impressive comeback from a significant injury a year ago, and a more minor injury earlier this year with a broken hand.

For Catharine Pendrel, competing in Tokyo is a remarkable accomplishment. The rescheduled Games took place just months after the Canadian Olympian and two-time world champion gave birth to her first daughter. The new mother improved steadily over the season, riding to 18th in her fourth – and final – Olympic Games. Haley Smith, Canada’s second entry in Japan, finishes 29th in her first Olympic Games.

This was not the showdown many expected going into Tokyo. Neff was on the list of favourites, but behind two French riders. Loana Lecomte has dominated this year’s World Cup racing. Reigning world champion Pauline Ferrand Prevot was never far off, and was very clear she was focusing exclusively on the Olympic race.

Early on, it looked like Neff and Prevot would, once again, battle for the win. The two rivals had worked out an advantage over the field. Neff’s speed on the descents was greater, though. After a near-miss when, as Ferrand-Prevot slowed, Neff nearly went off the side of the fame feature that ended Mathieu van der Poel’s race, the Swiss rider moved to the front. Neff took a high line, Ferrand-Prevot the main, low line. Neff passed where the two lines converged, on a steep uphill rock-armoured face. Ferrand-Pevot paused, causing her to slide down the rain-slicked rocks. This dropped the French woman back to sixth instantly.

Lecomte remained in the chase group with Linda Indergand and Sina Frei. From early on, it was a two-nation race. Evie Richards did her best to interrupt the Swiss sweep. As did the Netherlands’ Anne Terpstra and Anne Taubter.

While Neff rode clear, building her advantage every lap, Ferrand-Prevot chased hard. The French rider caught the chase group and immediately attacked. Indergand and Frei followed, keeping PFP’s advantage to a minimum. With the two Swiss working towards a common goal, they eventually caught, then passed Ferrand-Prevot. The world champion faded to fourth, then slowly dropped further back, showing signs of her effort.

Frei and Indergand kept moving, distancing not just Ferrand-Prevot, but the rest of the women’s field aside from Neff. With two laps to go, the Swiss were cuing up a potential podium sweep.

Lecomte briefly rallied, showing signs of earning a result for France. On the fourth lap, with Evie Richards in tow, started to close on the Swiss riders in second and third.

In the end, it was Kata Blanka Vas, the 19-year-old Hungarian that would come closest to the Swiss. Vas placed fourth, over a minute back from third. 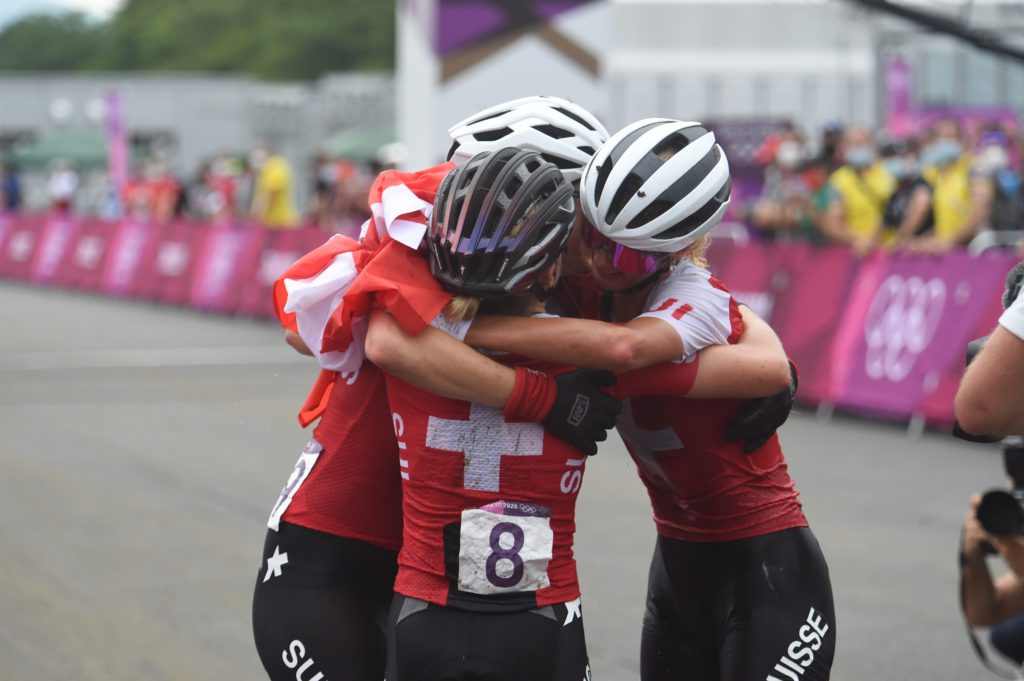 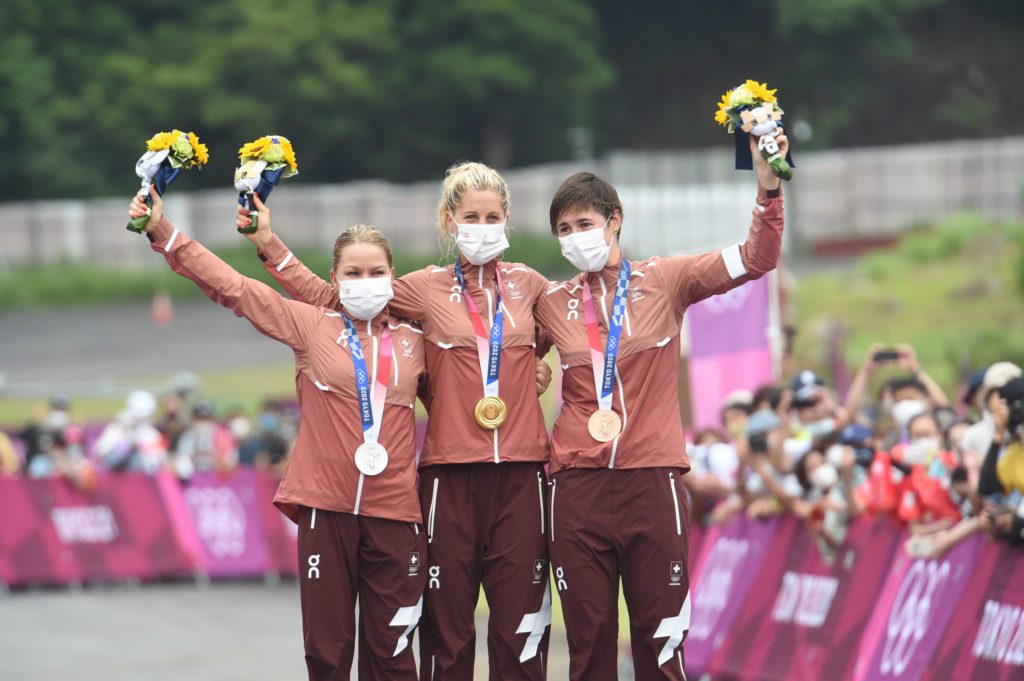 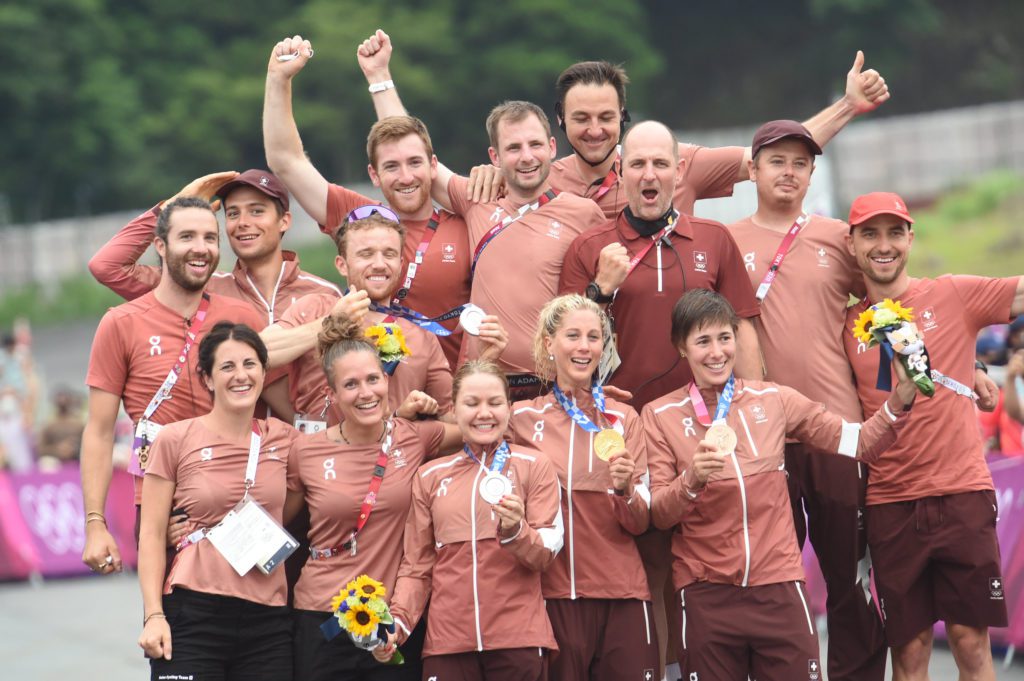 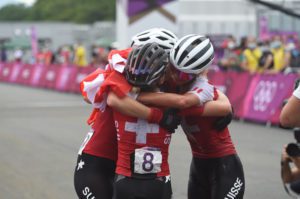 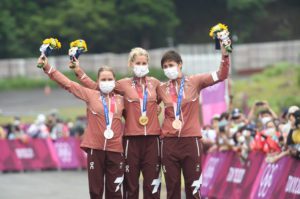 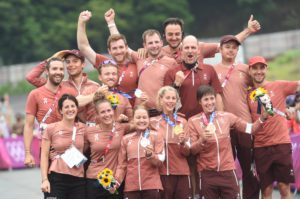 Jolanda Neff hear the bell lap for the fifth and final lap with a 1:27 gap to Frei and Indergand in second. With just one lap remaining the Swiss 1-2-3 was looking solid. That gave Frei and Indergand freedom to race for the medals. Frei pulled out a slight advantage, with Indergand never falling further than a handful of seconds behind.

Frei crossed next, with Indergand already celebrating Switzerland’s remarkable accomlishment on the finish stretch behind. The Swiss riders achieve the first-ever sweep of a mountain bike Olympic podium.

Haley Batten rode to ninth, the U.S. rider finishing as top North American. Pauline Ferrand-Prevot crossed the line 10th, 4:32 back from Neff. The result will surely be disappointing for the French rider, who arrived in Tokyo as a favourite. With two Olympic disappointments, health problems leading to her difficulties in Rio in 2016, Ferrand-Prevot will surely carry some doubt into the Paris 2024 games.