The Uxbridge, Ont. racer swept the Greek race series’ first round, which concluded earlier in the week. After a day off to recover, she backed that win up by taking the top spot on three of the four stages in Salamina Epic #2. Italy’s Greta Seiwald was the only rider able to unseat Smith during either round, pushing the Canadian to second on the Stage 3 XCM race.

One lucky fan got to share in Smiths victory. The Norco Factory Team racer held a contest on Instagram to correctly guess the average power she had to produce to win the 66 km second stage, which notched up 2,400 m of elevation gain on course. While most of the racing in Greece has been warm, the temperature for that day dropped to five degrees Celsius, with 35 km/hr winds. Head to her page to find out the winning wattage. 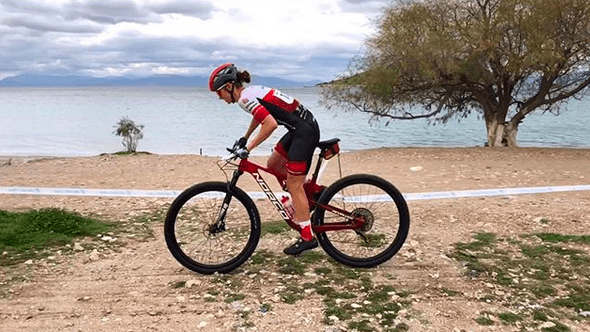 Cindy Montambault finished ninth on the final day of the Salamina Epic #2 to claim 10th overall in the GC. The Canadian ends up one spot behind Savilia Blunk, the American under-23 national champion that recently signed to Sho-Air Twenty20 Pro Team.

Stage Race #2 complete. Super hard racing but the legs were coming around. Felt amazing today on the 33km point to point and was in contention but then it happen. Luckily I was able to plug the gash and finished real strong only losing 1 spot in GC. Finishing 6th. Stoked off this result and all the racing so far here in Greece! Still 1 single day race to go! #greece #salaminaepic #stagerace #norcobicycles #mtb #mountainbike @norcobicycles @norcofactoryteam @dtswiss @srammtb @kendamtb @ltp_sports @jakroocanada @smithoptics @wildernesstrailbikes @htcomponents @rockshox @skisnowvalley @cutthroatshaves

Peter Disera had a great second week at the Salamina Epic series. The Canadian national champion was sitting in fifth overall going into the final day of racing. A slashed tire cost Disera valuable time, but he was able to recover and limit his losses. He held on for sixth overall in Salamina Epic #2

Norco Factory Team’s newest signing on the XC side, Andrew L’Esperance finished 16th in Salamina Epic #2. The former Forward Racing manager/racer finished seventh in Round #1, but started the second set of four races on the wrong foot.