BCBR Gravel Explorer took to the hills of B.C.’s Okanagan region for the firs time this year and, after five days of racing and scenic lake views, two champions emerged.

Cory Wallace held off a hard-charging Alexander Fraser-Maraun, who finally made his breakaway stick on the last day. Amity Rockwell and Sammi Runnels brought their rivalry down to the last day, with one taking overall win and the other a final stage win.

With gravel stage racing being a relatively new format, every racer making it through five days of varied and technical racing had to face their own challenges to make it to the final finish line.

Alexander Fraser-Maraun (Red Truck Racing p/b Mosaic Homes) has hunted for a breakaway win all week. On Friday, he finally found his opportunity. The Red Truck racer launched off the front on the first climb, as he has several times at BCBR Gravel Explorer. This time, he made the move stick, riding alone to the stage win.

Further back, Cory Wallace (Kona Endurance Team) was riding in  group, defending his lead in the overall. That, and probably trying to save some energy for the BC Bike Race MTB. The Jasper, Alta. athlete has a single day off before launching right back into seven stages of singletrack mountain biking on Sunday.

In the women’s race, Sammi Runnels (CNCPT Team) had a big project ahead. The U.S. rider led for three stages before a costly mechanical dropped her into second place overall on Stage 4. Through all that time, Amity Rockwell (Easton Cycling) has chased tenaciously. After finally taking a stage win and moving into the GC lead, Rockwell wasn’t easing off the gas with one day to go.

Runnels attacked again, taking her fourth stage win by 32 seconds. On a course that favoured group riding and with few opportunities to open serious time gaps, Runnels could not overtake Rockwell in the overall. 32 seconds, cut into Rockwell’s lead but could not reverse it.

Sammi Runnels wins the final stage of this week’s racing. Amity Rockwell wins the first BCBR Gravel Explorer. The pairs week-long battle propelled them to 14th and 15th in the overall standings. 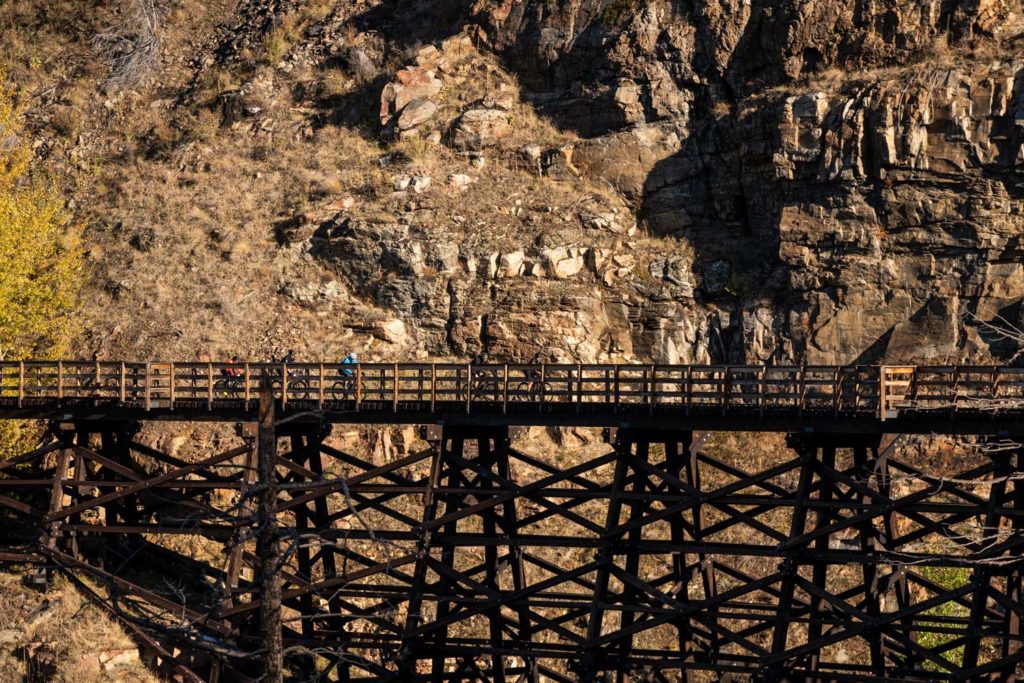 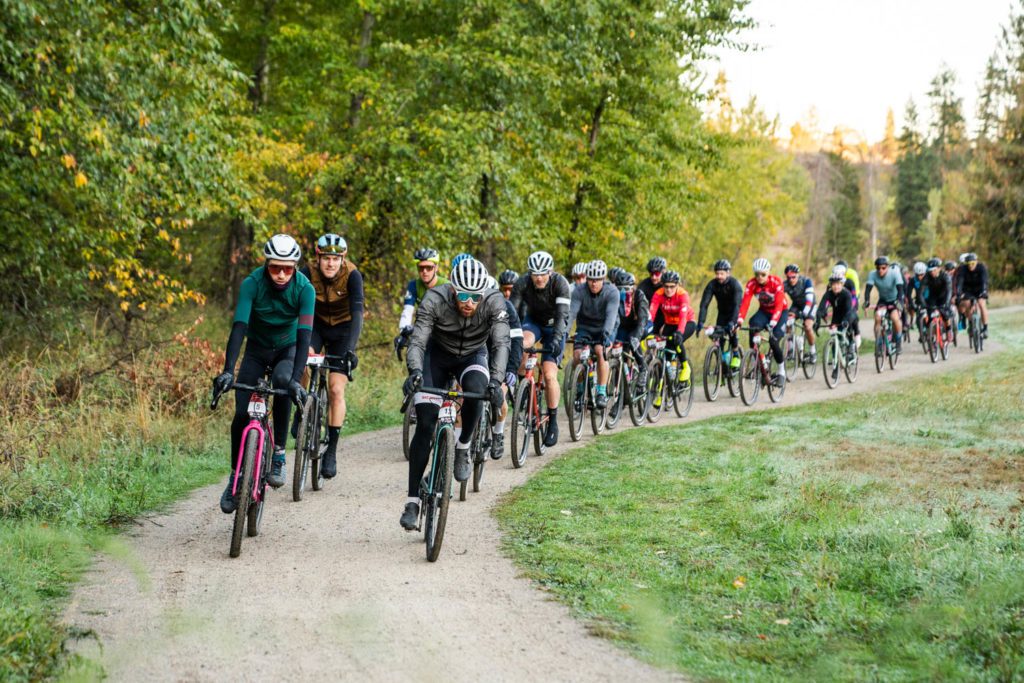 The race rolls out from Mission Bike Park, headed back towards Penticton. 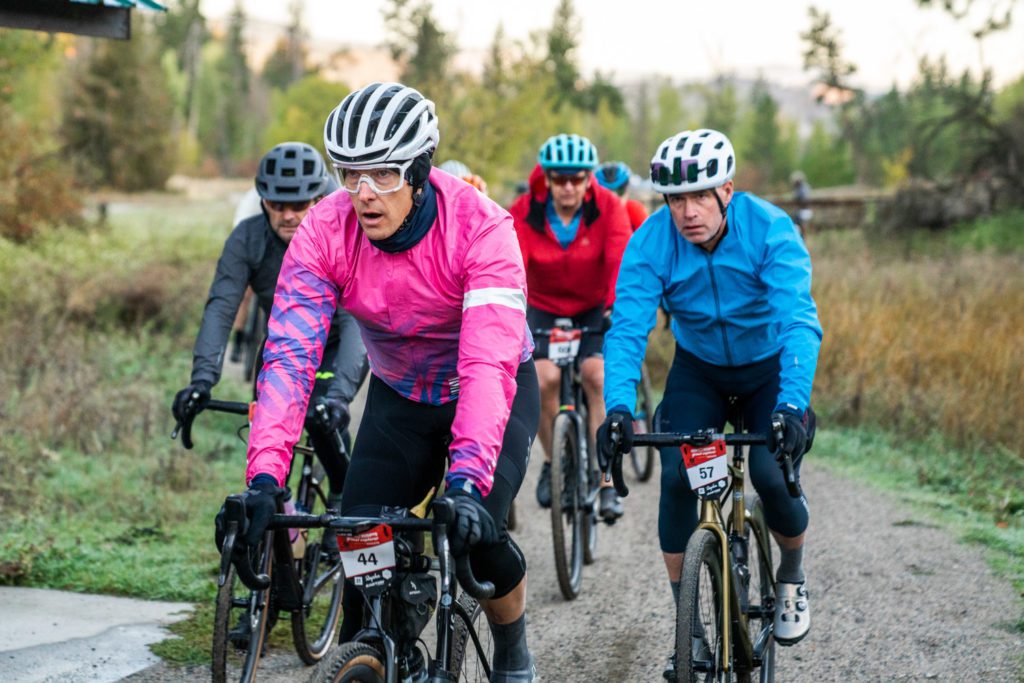 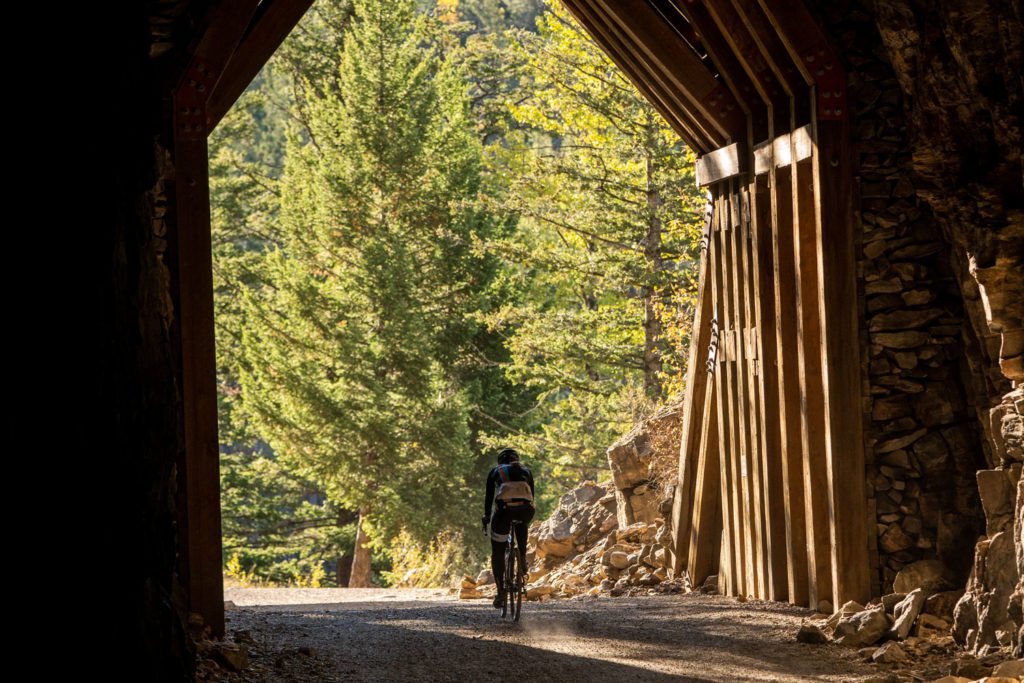 There are some unique course features in the hills surrounding Penticton. Photo: Chris Stenberg 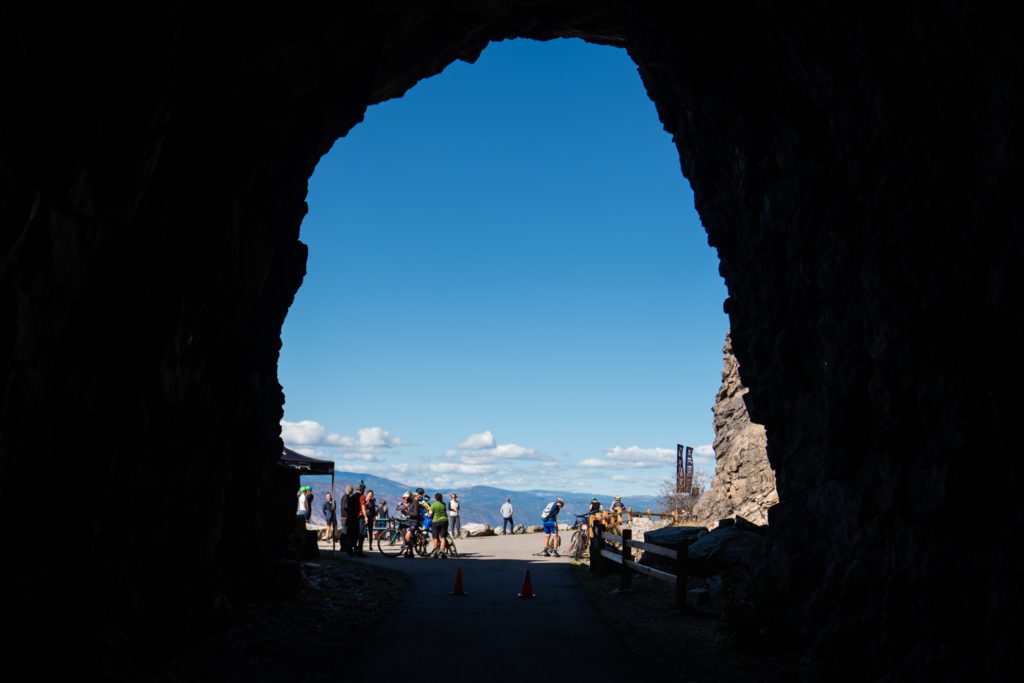 How many races tunnel through mountain sides? Photo : Chris Stenberg 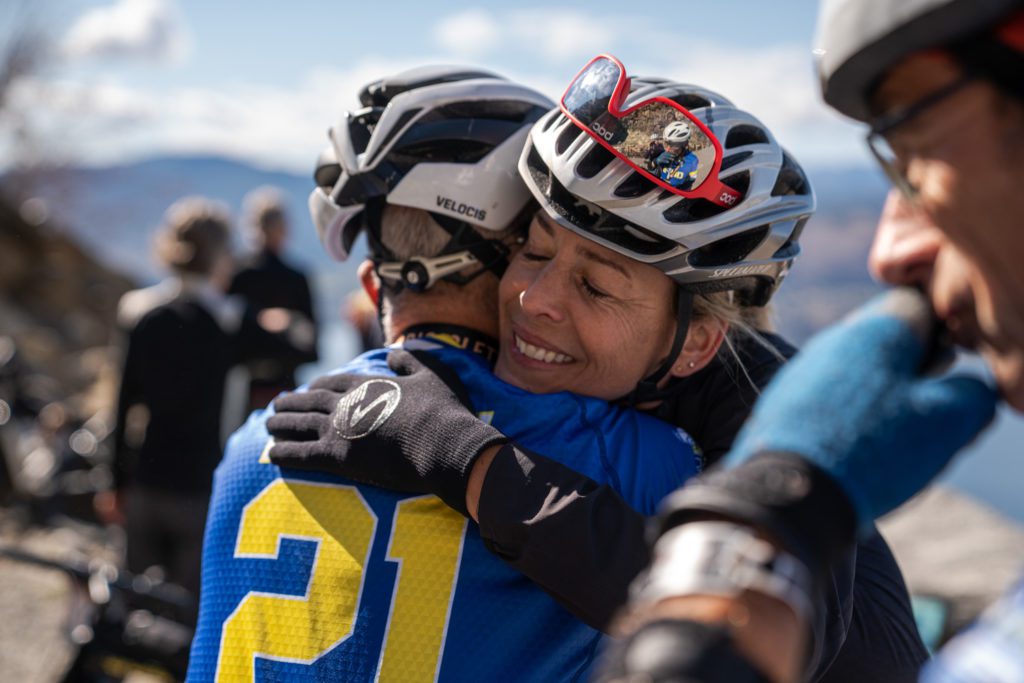 The joy of finishing out a week-long race. 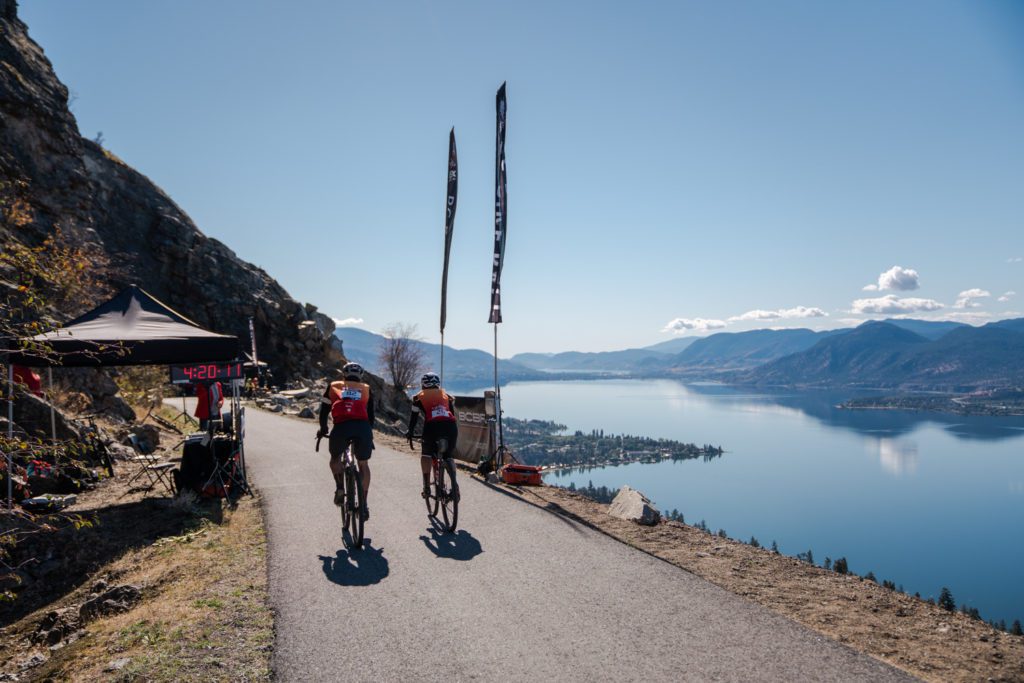 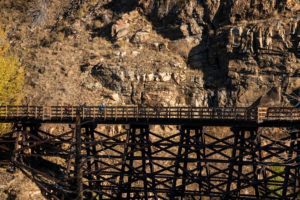 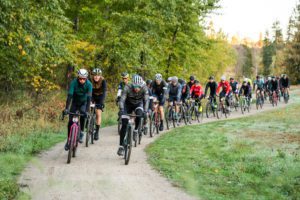 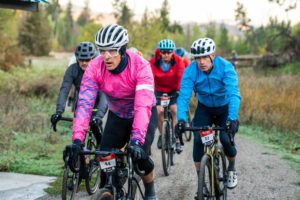 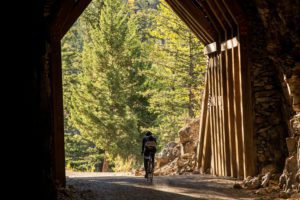 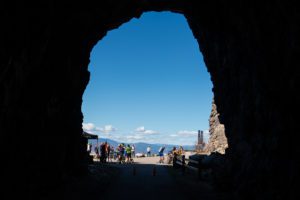 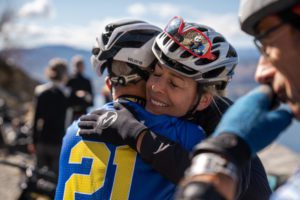 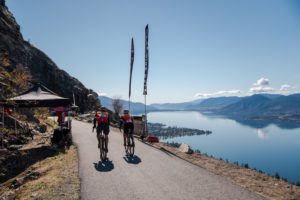 Victories of all kinds

Further back in the field, Ashley Krzeszowski was thrilled to finish her first gravel stage race. New to cycling, her and her friends were propelled into the sport by COVID,  Krzeszowski signed up for BCBR Gravel as  personal challenge.

“So, we all had these crappy college bikes, Covid hits, and they close the parks down, no cars were allowed up there, no parking on the road and we just kept using our junk bikes to get us around and in the woods,” says Krzeszowski. “That’s what led me to this, we learned about BC Bike Race, and we were so happy to learn about the gravel explorer this year.”

How is the new cyclist feeling after a week of racing on roads, trails and rail grades?

I’m so sad it’s over you guys, I wish I could do all over again next week,” Krzeszowski says. “I learned so much my bike handling skills have improved this week, it has been the most incredible experience, I can’t wait to come back next year.”

Some pros, like Wallace, are about to do it all again next week. Tune in for our coverage of BC Bike Race 2021, the first edition of the Canadian classic not to be held on B.C.’s coast.