While the pro riders are impressive, we wanted to hear how it was for the people that were out there all day, well after Ivan Slik’s winning time of 9:22:04.

These Canadians battled 200 miles of tough Kansas gravel (and some seriously stressful airport conditions on the journey to and from Emporia, as if the race itself wasn’t tough enough). We asked them what drew them to Unbound in the first place and how the experience compared to their expectations.

They shared stories of spooky night cows, energy-sapping mud and, no matter how hard the race was, an overwhelmingly positive experience facing down a big challenge, whether that was alone or with friends. 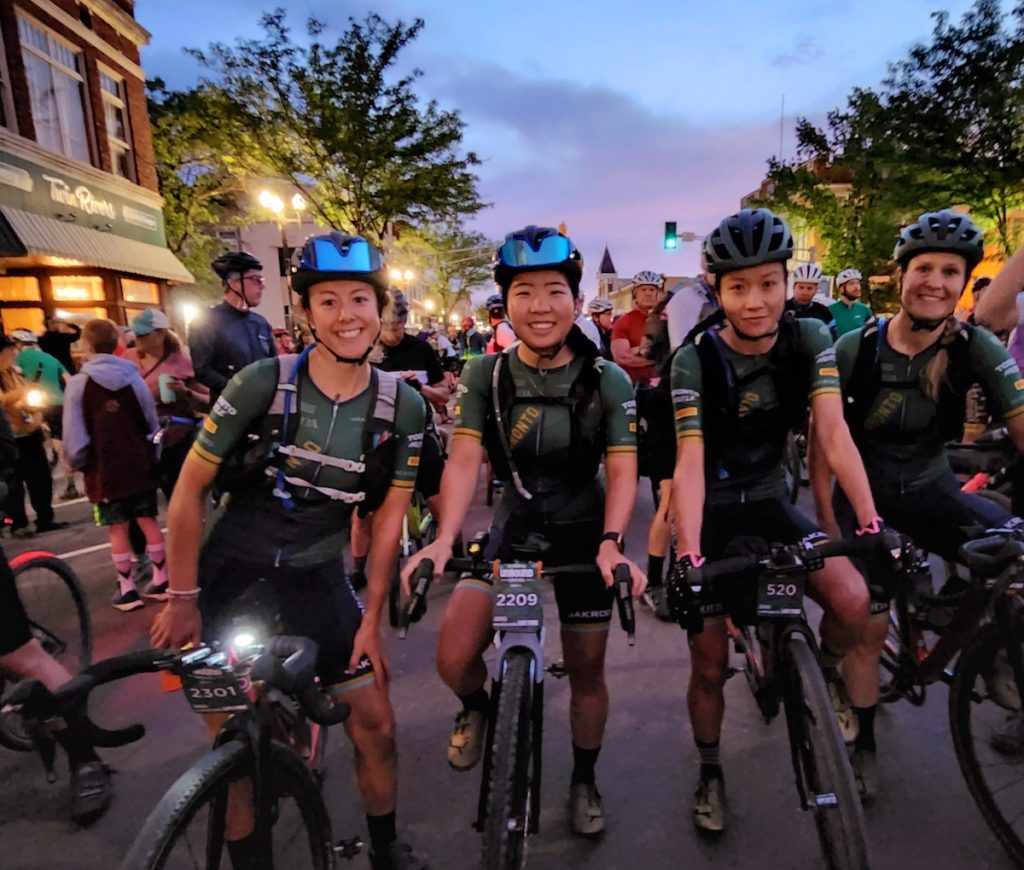 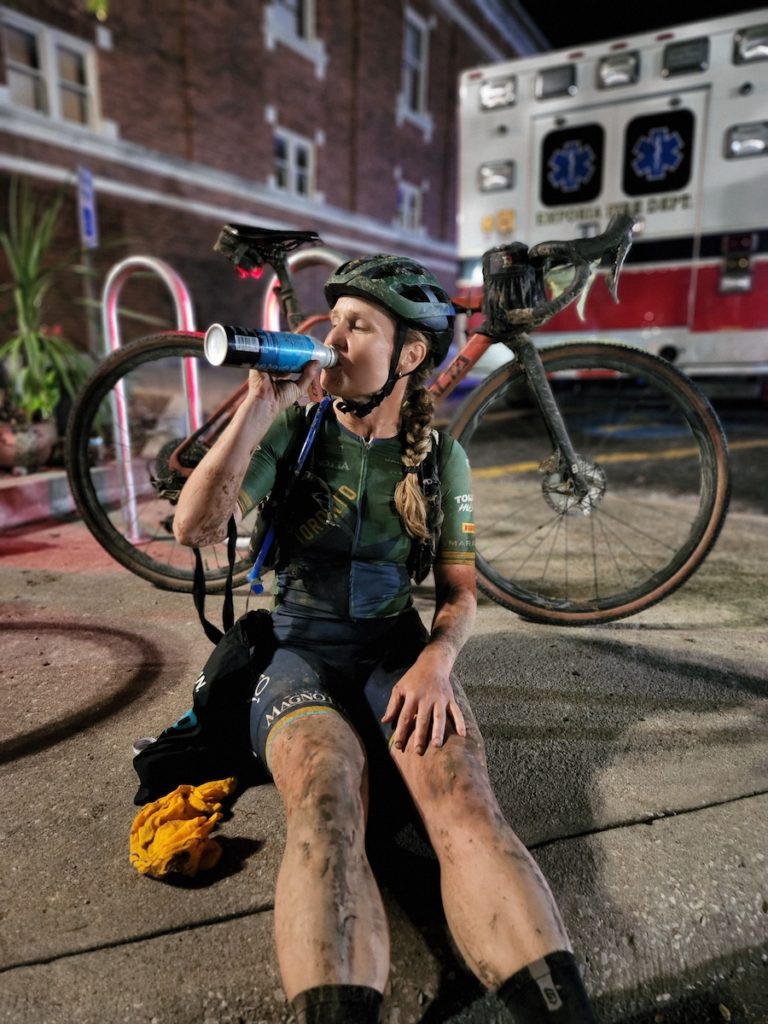 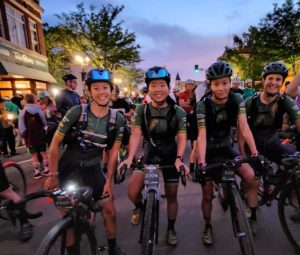 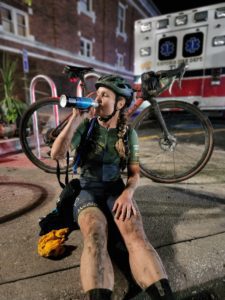 If you follow Canadian Cycling Magazine on Instagram, you would have noticed Toronto Hustle reporting live from Emporia all weekend. The trio, who were joined by Hannah Simms in Kansas, checked in again after having a few days to reflect on the ride.

Unbound is an early season event for us Canadians so most of our preparation was on the trainer through the winter months. We knew we were capable of riding our bikes for many hours but Unbound brought the extra challenge of unknown course conditions and the mental toughness required to cross the finish line.

The race was the toughest event any of us have ever done. Our training couldn’t prepare us for what Unbound puts riders through! It was so much harder than what we were expecting.

The fear of tearing tires on the infamous flint rocks took a lot of mental focus while riding, and we underestimated how energy-draining that could be. The sticky mud sections that forced us to carry our bikes for miles also proved to be very draining, and despite very thorough nutrition planning, we couldn’t stomach any food in the last few hours.

All three of us have a newfound respect for the late-night finishers. It’s tough hanging in there for so many hours. Kudos to everyone who participated, and we hope to see more women out there in the coming years!

There’s just something enticing about trying to race a big distance and Unbound seemed to be a pretty unique event to give 200 miles a go! I’d heard some pretty wild stories about the event and, when I found out some other members of the 7Mesh team and Kelly Servinsky of Tutti Gravel Inn were headed down for it, I was keen to join them.

The race was hilarious, hard, exciting, wild and everything in-between, honestly. It was great taking it on with the rest of the 7Mesh team. It felt like something we were all in together on. We were all stoked to finish and had a great time to boot. Definitely a win in my books.

We talked to Randell extensively about how he was preparing for Unbound Gravel this year on the podcast. If you listened to that, you’re probably wondering how his race went.

“I’d say the course was harder than expected. There were heavy roads that sapped our energy and there were no easy sections.

“We rode as a crew and all five of us that started together finished together. Sharing the energy as we rolled across the line was amazing.” [Ed. Barry Cox, Marc Mazer, Holly Clarke and Stephanie Au finished with Randell] 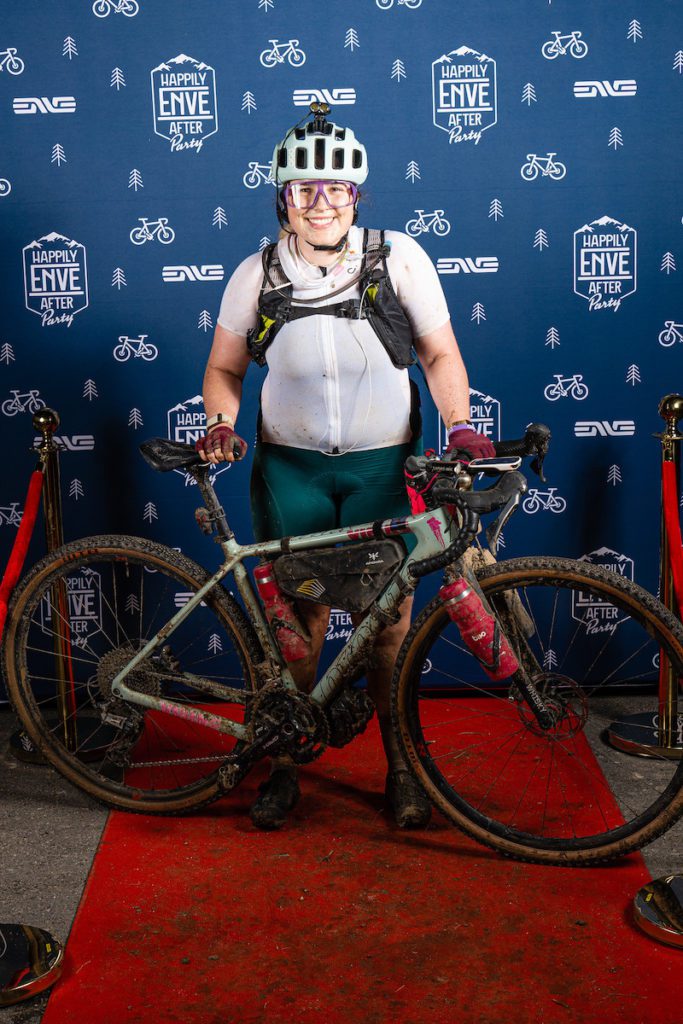 Happy to be across the finish line 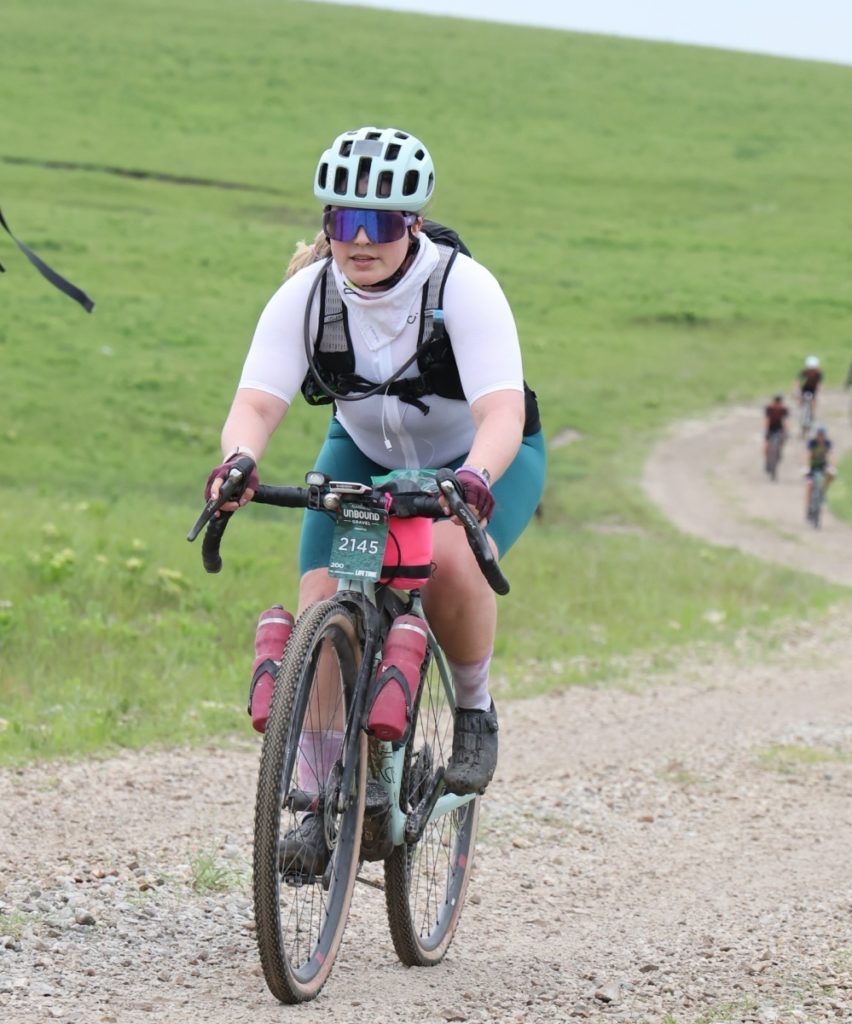 On course outside Emporia 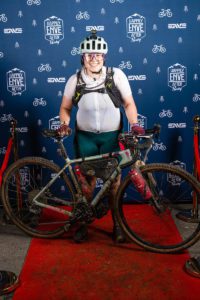 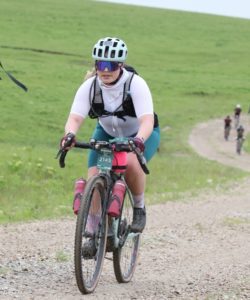 I wanted to do Unbound because from the outside looking in, it has this mystique of being a race for the hardcore, fast, smashy type people. As someone who does not identify that way whatsoever, it was really important to me to put myself out there. I love the challenge, the things you’re able to see, and the exponential growth you can experience as a human just from one ride.

I actually had my heart set on racing the XL but I missed the lottery entry date, so threw my hat in the ring for the 200. I was actually a lot more nervous for the 200 because you do have to ride a bit faster to make the time cut and I’m definitely more of a Diesel engine.

The day was everything I wanted it to be. I probably smiled 90% of the time, regretted everything when we hit the peanut butter mud, and proceeded to have some really brutal miles doing everything I could to dig myself out of a really dark mental place. I spent a lot of the day alone, which was at its highest both euphoric and cathartic, and at its worst soul-crushing. I really thought I would need to rely on other people’s wheels to keep my speed up, but found I was most consistent when I stuck to my own pace.

The most unexpected part of the day was how much fun I had riding at night and the new energy that came with it, which makes me even more excited to give the XL a go. At one point I was all alone on a stretch and all of a sudden my headlamp lit up dozens of little glowing yellow dots a few meters ahead of me. It was pretty spooky, but as I got closer the dots slowly turned into cows and I just couldn’t stop laughing. 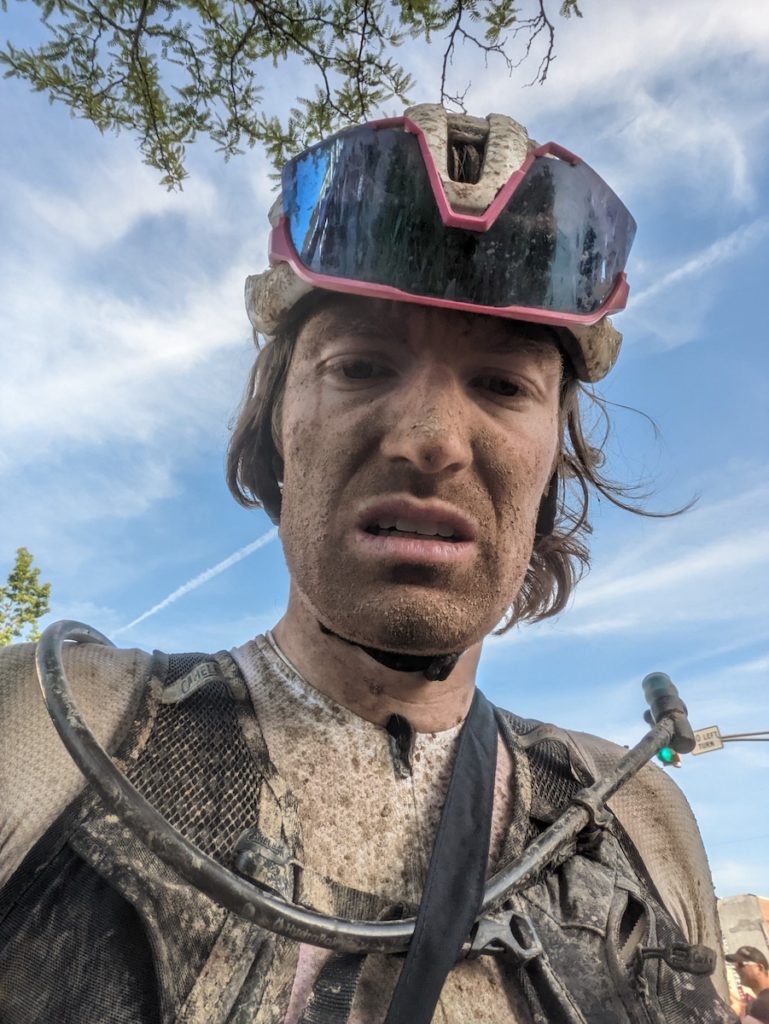 The "after" of possibly the best before/after ever 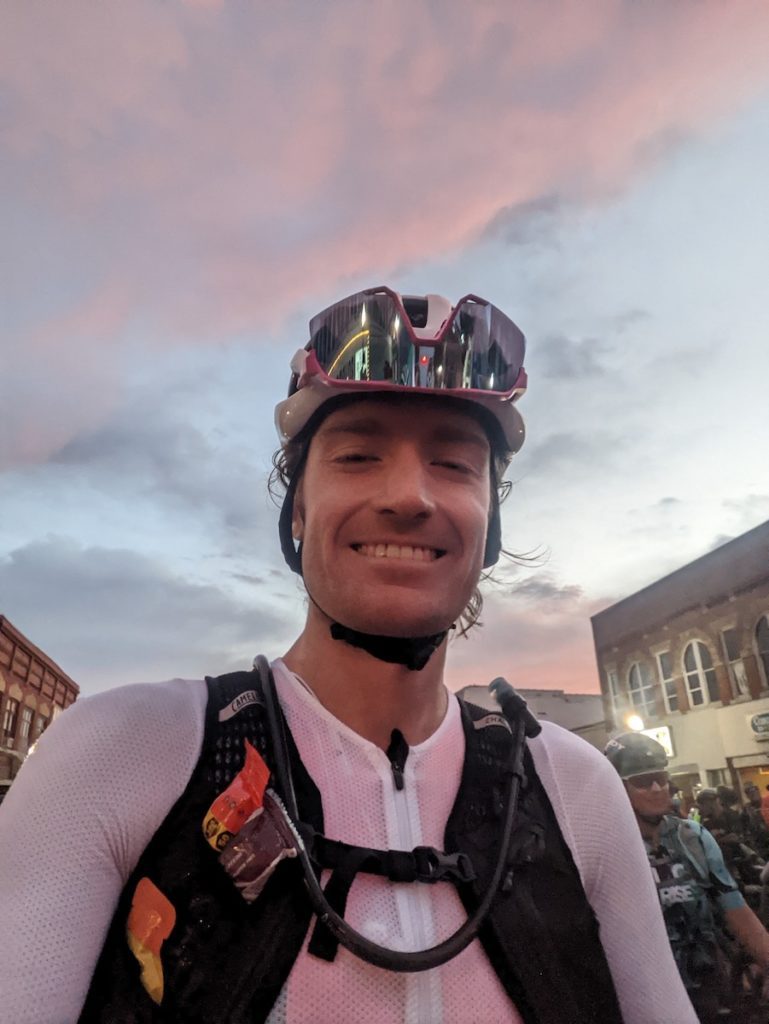 Before the storm: dawn in Emporia on the Unbound startline 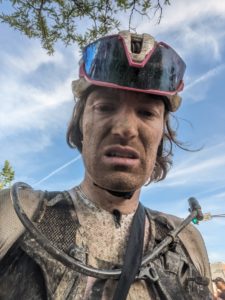 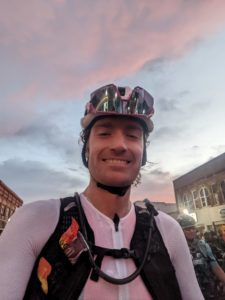 Unbound has fascinated me for a number of years now. I’d ridden CX for years and loved long rides, but gravel riding was still in its infancy when I first heard of Unbound and I hadn’t thought to combine my love of fast offroad riding with incredibly long days. Knowing about the event inspired me to tackle lots of long gravel rides in the Sea2Sky corridor and start venturing further afield with my cross bike.

I was never able to really give gravel racing a go while racing on the road full time but at the end of 2019 I decided to enter the 2020 event. I wanted to show up to compete and hopefully get a decent result. Covid meant that I had to wait two years to get to go. My goals and motivation changed a lot in that time. Instead of showing up to race at the front, I just wanted to show up to experience the event and cross that finish line, no matter how long it took.

After the first aid station, I found myself in a good group where we were all working well together when the downpour that I knew was going to come finally hit. Rolling the gravel in the pouring rain sent a fine silt flying everywhere. At around the 200km point, we began descending a gravel road that quickly turned to slick mud. I was trying to make my way around a corner and my wheels quickly disappeared out from under me and I gracefully swan dived into the mud. I picked up my bike and started running as I knew that if I tried to get on again, I’d probably hit the deck again soon. We’d finally found the infamous peanut buttery mud and I finally understood why it was so feared. It took a good few minutes of attacking my frame with my wooden paint stick to get it cleaned enough that the wheels would spin.

I really took my time at the last checkpoint and ate as much salty food as they had on hand. I rolled out of there in a good headspace ready for the last 60km of pedalling home. My good mood quickly evaporated when I hit a 2km stretch of mud that had been baking in the sun, getting even thicker and stickier than the first section. I didn’t want to carry my bike but the mud was so sticky and thick that I couldn’t push it anymore. Everyone I saw through this section seemed defeated and I think if it had come any sooner in the race quite a few people would have pulled the pin at the other end of it. However, once I was free of the mud there was a creek deep enough to wash my bike in and this instantly turned my mood around.

Riding into downtown Emporia was like riding down the home straight of a BC Super Week crit, It was a tunnel of noise with cowbells sounding, people cheering, and the announcer calling people in – Only I was going about ¼ the speed and was 10x more tired than I’ve ever been at a Crit. I wish I could say I felt some euphoria or special feeling when crossing that line, but really I was just focused on getting back to the hotel so I could get off the bike, shower, and eat a pizza.

I went to that dark place a few times on the ride but came out the other side every time riding a high of the experience. I don’t think I ever went more than 10 minutes without seeing someone else out there riding and that shared experience of suffering definitely helped to keep me going. Going into the event, I kind of thought Unbound would be a ‘one and done’ event for me that I wouldn’t ever feel the need to go back to. The whole experience and vibe proved that wrong though, and now I can’t wait to go back to Emporia.

Well, the Canadians had a wild time in Kansas. There were some fast finishes and epic adventures that played out over 200 miles of pedalling!