Trek is bringing the Slash back up to speed for 2021. The last major reworking of the Slash came when it moved to 29″ wheels in 2017. Then, it was one of the early adopters for big wheels in enduro. That put the Slash at the front of the pack in the rapidly evolving discipline of enduro.

Since then enduro has continued to change. Races are held on harder, more demanding tracks. Racers have responded with demands for longer-travel, more capable bikes. With its overhaul of the 2021 Slash, Trek is looking to bring its flagship enduro bike back to the front of the pack. The catch? Trek also wants to keep the Slash fun for everyone who doesn’t spend their weekends between course tape.

We’ve spent a few weeks on the 2021 Slash trying to sort out if Trek can have its enduro bike, and be fun on trails too. Head here to read our impressions of the updated bike. Below are full details of what’s changed on the Slash for the upcoming year.

While the Slash retains its classic Trek look, there are numerous changes to the design and geometry. Some are big changes, some are more minor refinements. Added together, they amount to a substantial reworking of the already-successful Slash line.

There’s big changes to the Slashe’s design for the new year, including longer travel and more current, if not cutting edge, geometry. Following the trend towards longer travel enduro bikes, Trek ups the Slash’s travel 10-mm for 2021. There’s now 170-mm front wheel travel, via a RockShox Zeb and 160-mm rear.

Longer, lower, slacker geometry is the other big trend these days, and Trek joins the party. The emphasis, though, is on longer. There’s a smaller change to the HTA, raking out one degree from past models to 64.1 degrees. But reach grows significantly across all sizes. Reach is a full 20- to 30-mm longer, depending on frame size. This is offset by two other changes. Trek makes the seat tube steeper, creeping up to 75.6-degrees. The Slash is also now designed around a 35mm stem, instead of 50mm. This is all still adjustable by 0.5-degrees using the Mino Link, which carries over from previous years.

All of this works to make the Slash longer, and more stable at high speeds, while still keeping riders centered on the bike.

These changes bring Trek into the current era of frame design but doesn’t push the boundaries of progressive geometry. It keeps the rider weight centered on the bike, without pushing rider weight too forward onto the bars, where it starts to add fatigue. While Trek could have gone further, the plan is to keep the Slash’s trail bike capabilities, not make an exclusive enduro race bike that’s so aggressive it is no fun for anyone else to ride.

Trek’s Re:Aktiv shock is gone for 2021. In its place is a RockShox Super Deluxe ThruShaft. The shock isn’t just tuned for Trek though. Since Trek’s ThruShaft requires a custom design, the engineers in Madison, Wisc. asked to add some features of their own. The lockout and other dials are rotated to be off-centre, where they are easily reached but not easily bumped out of place. The rebound dial is clearly numbered, so you don’t have to count clicks.

Trek says the Slash frame is compatible with most aftermarket air and coil shock options, as well. Coil shocks both fit, and function well the frames suspension design.

Knock Block returns to the Slash, but in a significantly updated 2.0 design. It’s the same idea, but with a much wider range of motion. Knock Block 2.0 opens up to a tailgate-friendly 72-degree turning radius, compared to previous generations 58-degrees. The straight-shot downtube design disappears for 2021. This means that running a Knock Block stem is no longer necessary. Trek still argues there’s advantages to using the Knock Block 2.0 system, like not tearing your brake lines out in a crash, but it’s not a requirement on Slash frame’s going forward.

There’s a host of other well-thought-out details on the new Slash. Full-length, dual-density downtube guards add additional protection against debris and while shuttling. The top half, or tailgate pad, is removable for those that would rather show off their frame.

The newer 34.9-mm seat tube standard is used, including a new Bontrager Line Elite 34.9 dropper post. The updated dropper comes in four travel lengths, 100, 150, 170 and 200mm, with travel increasing in step with frame size on the Slash.

All of this adds up to a very light frame weight. Trek claims the carbon fibre Slash tips the scales at just 2,450g. 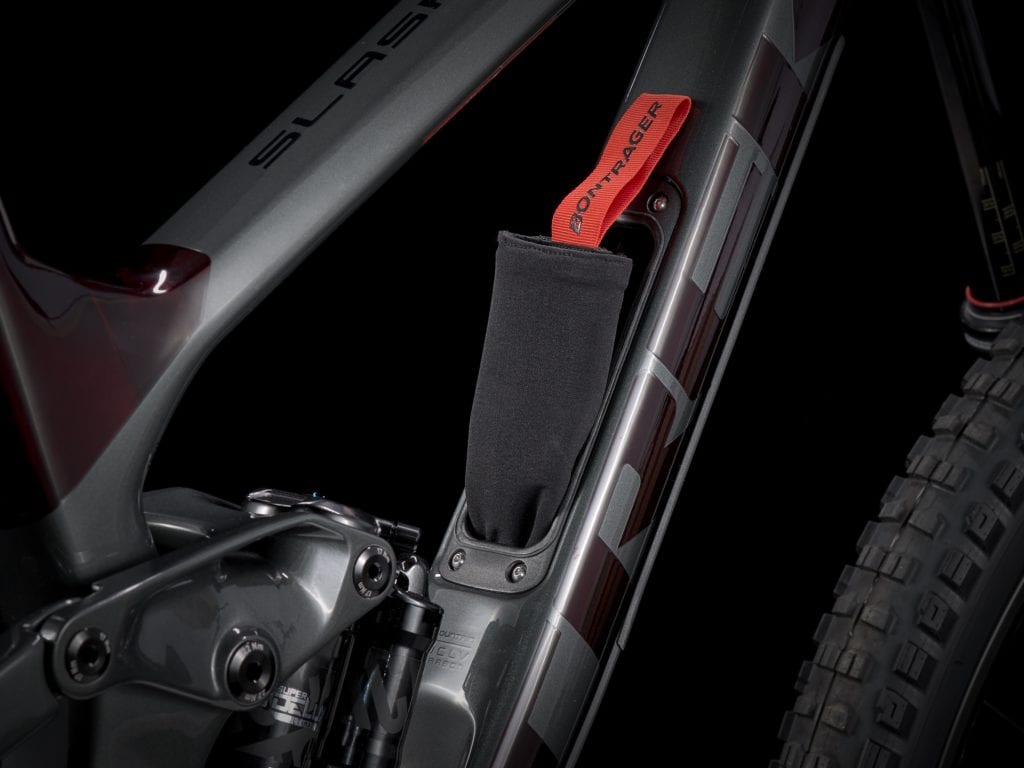 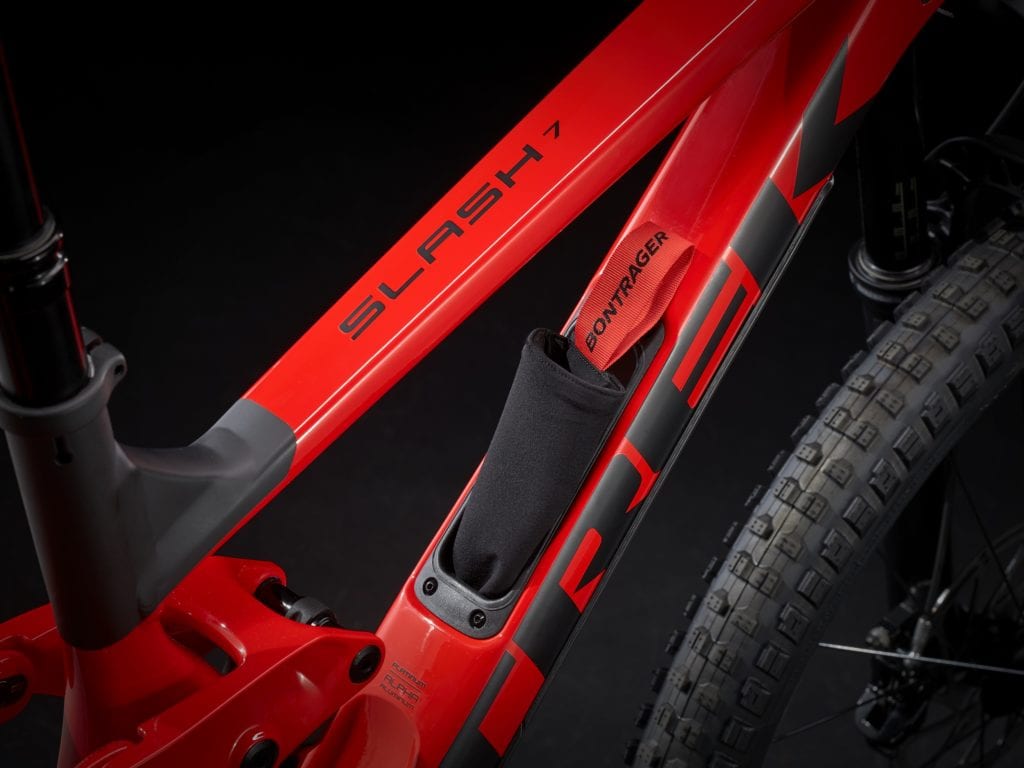 The Slash 7 and 8 aluminum frames also have a storage window. 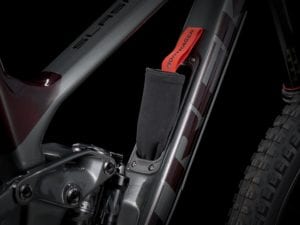 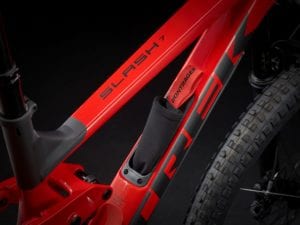 Trek introduced its version of in-frame storage with the Fuel EX line last year. That carries over to the new-model Slash, with one big change. Both aluminum frame Slash models also get the downtube storage compartment, just like their pricier carbon fibre siblings. Trek says adding the window to the aluminum frame, a first, was actually much more difficult than doing so for the carbon fibre frame. 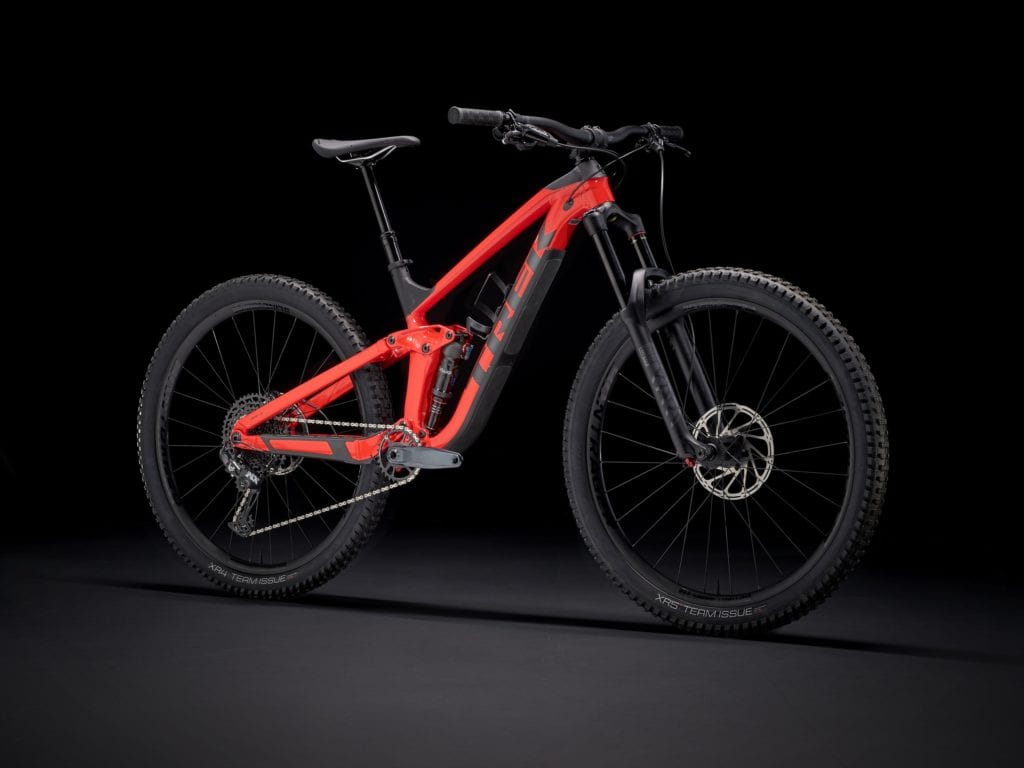 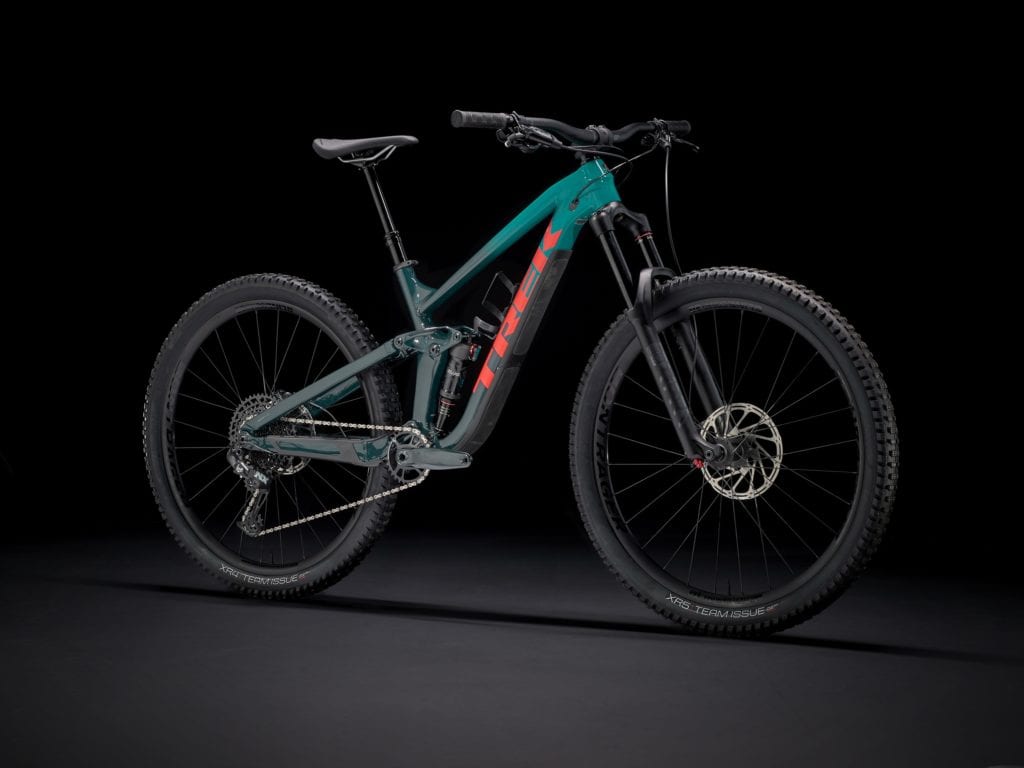 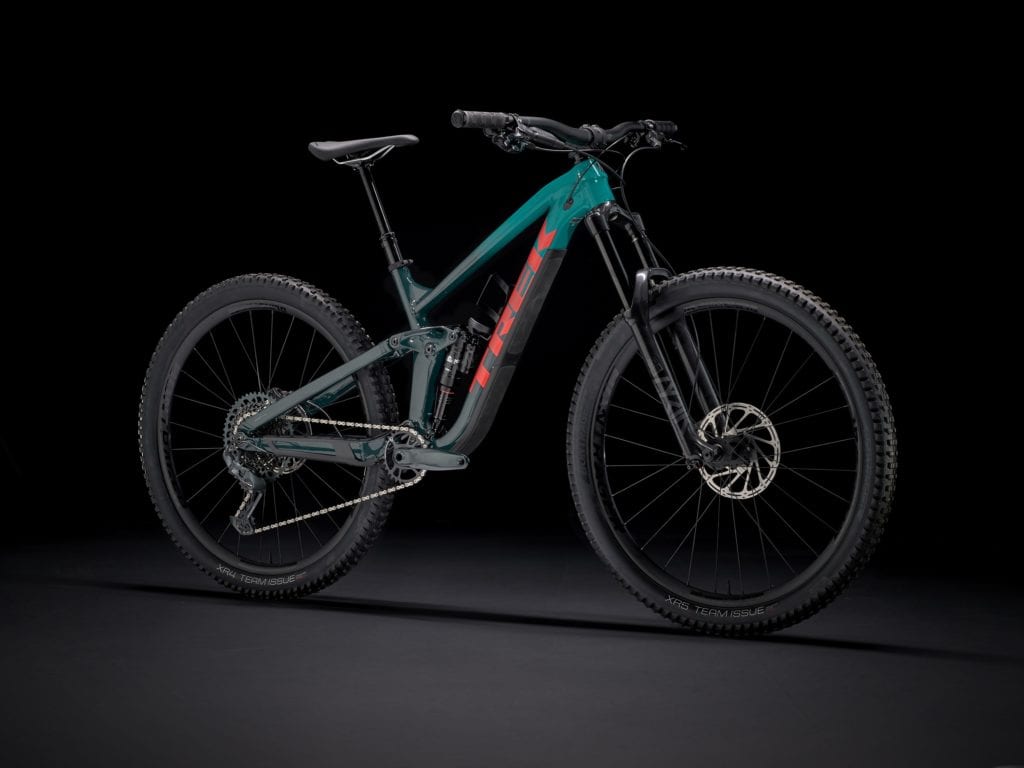 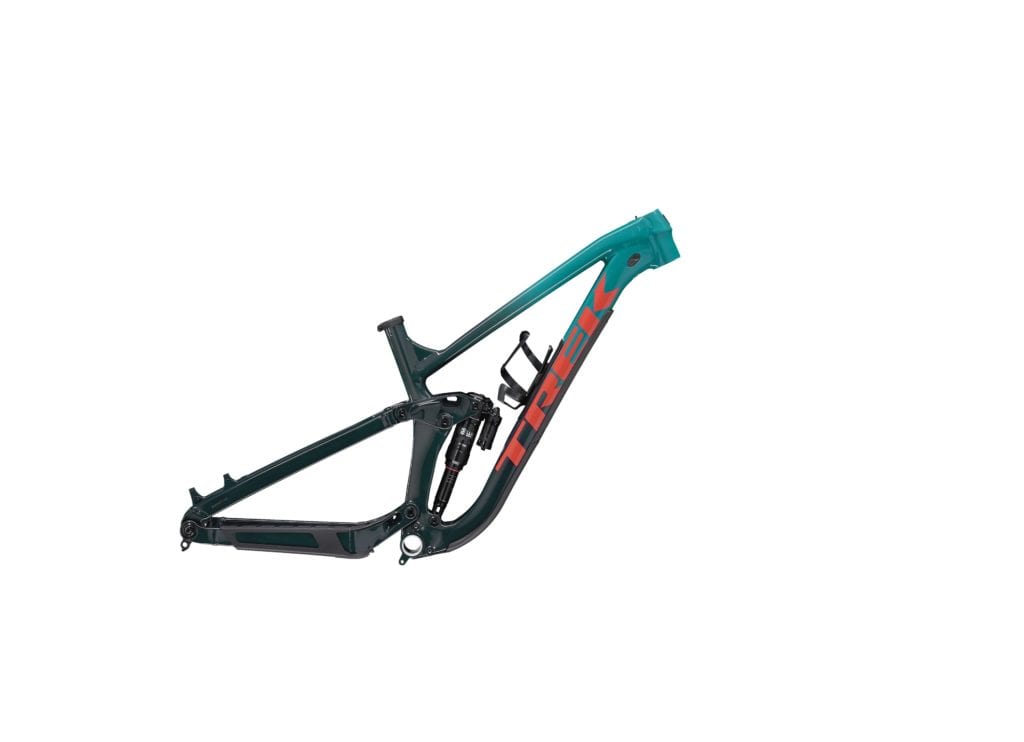 A frameset only option is available for both aluminum and carbon fibre Slash frames. 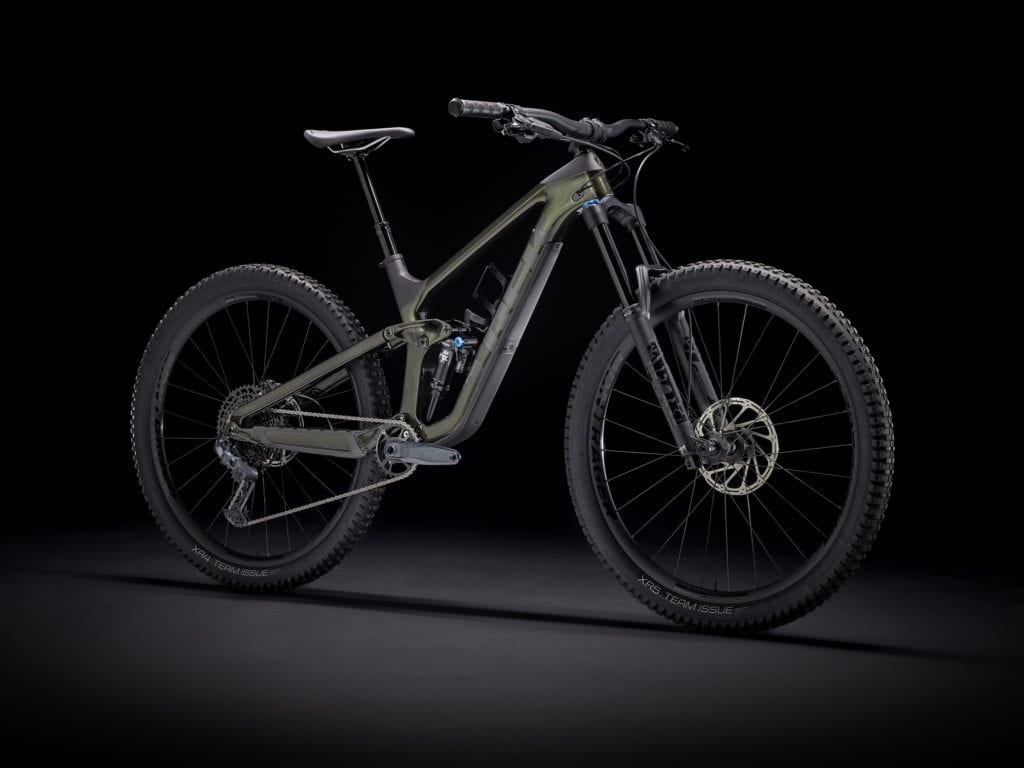 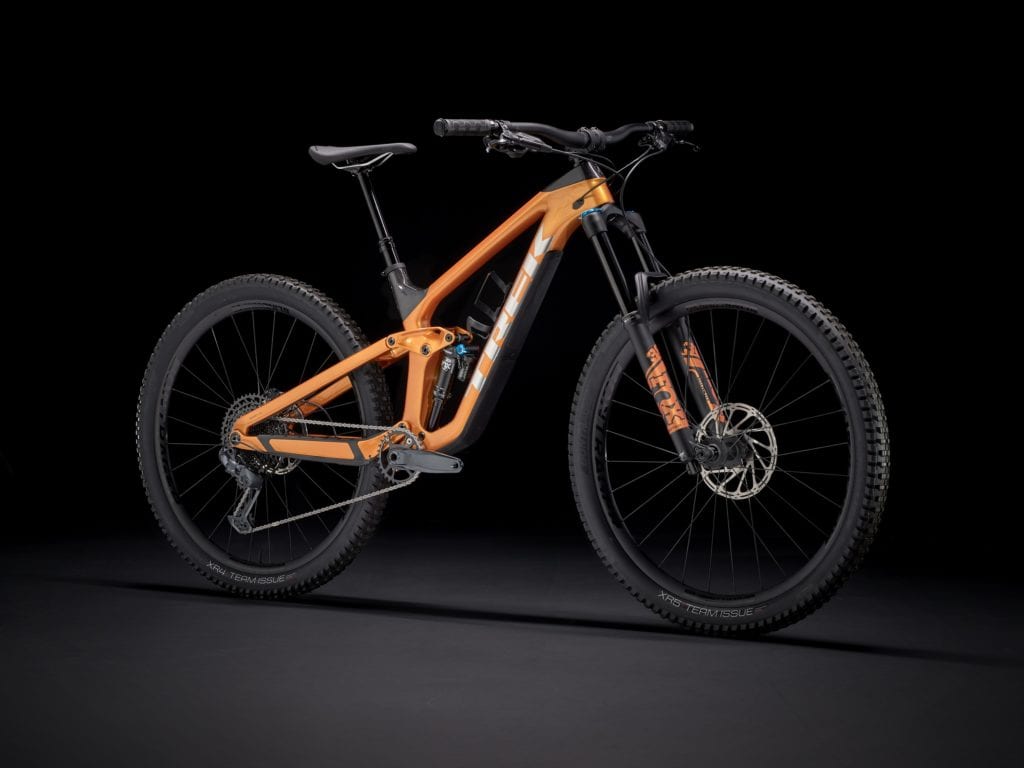 And the copper Slash 9.7 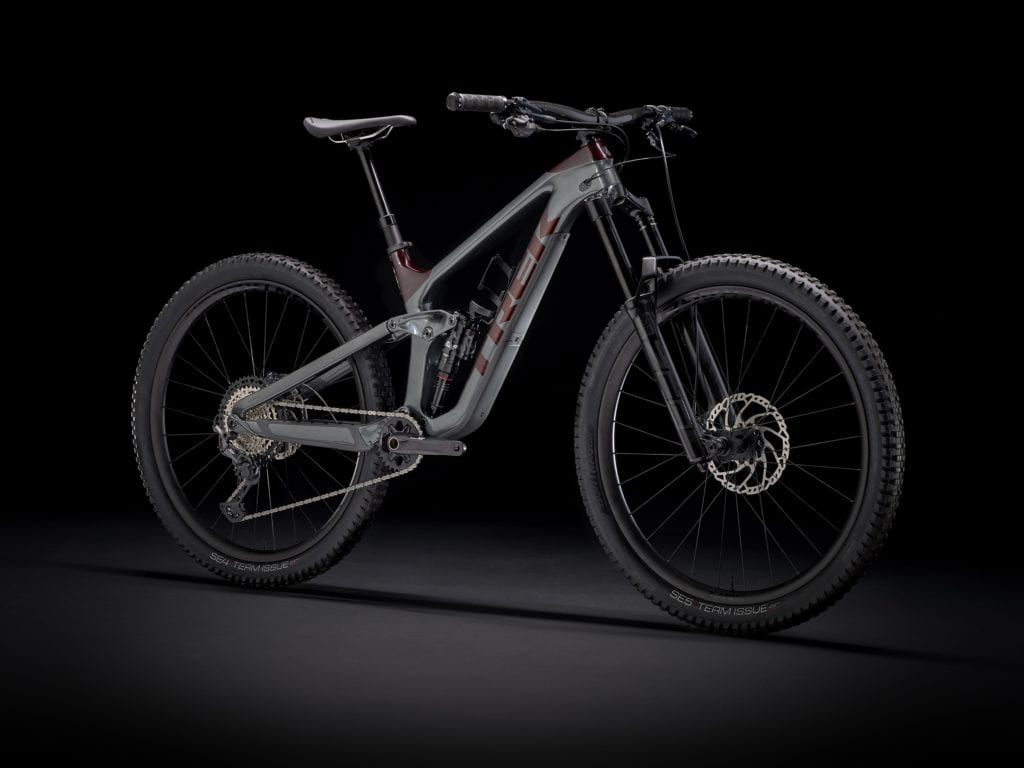 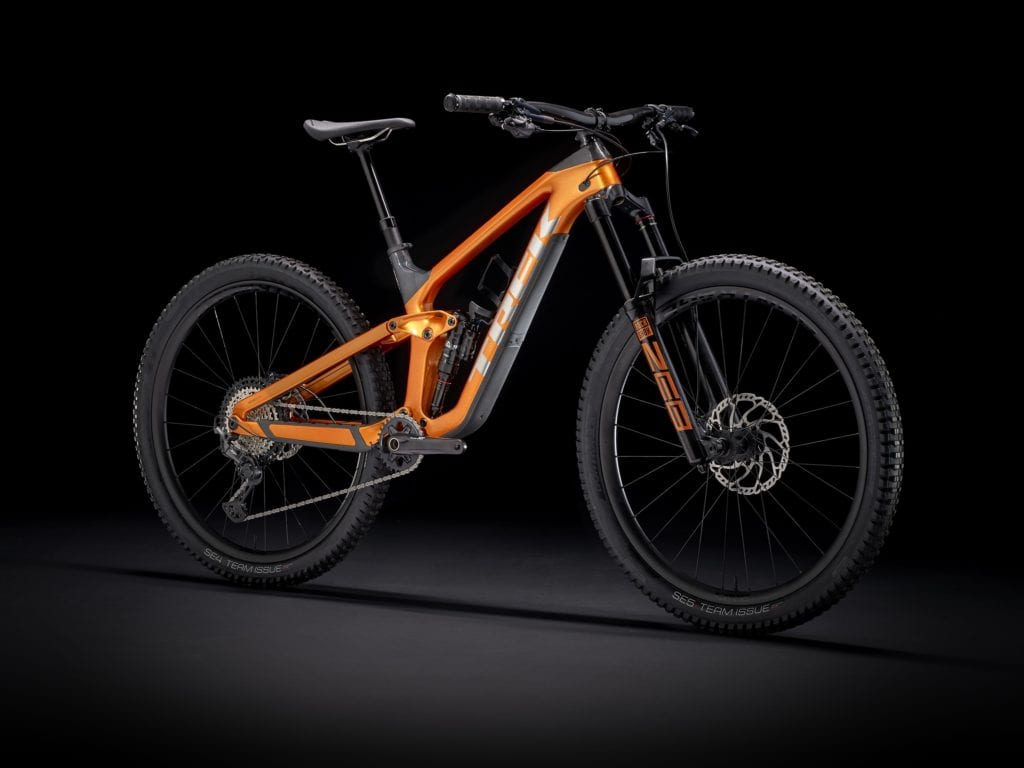 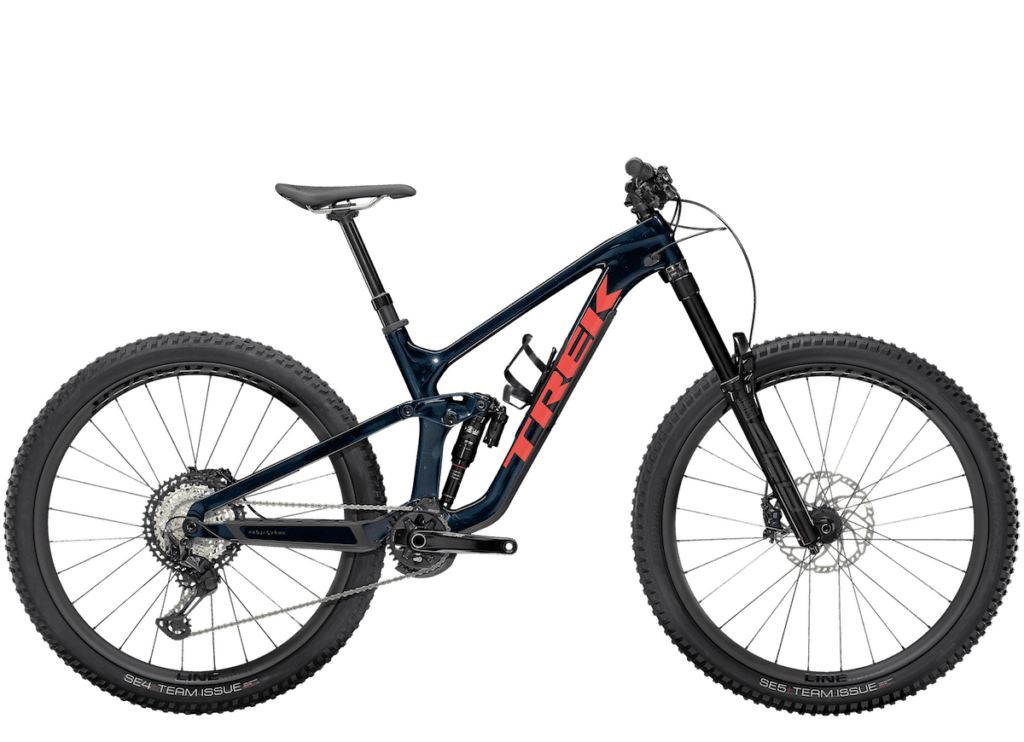 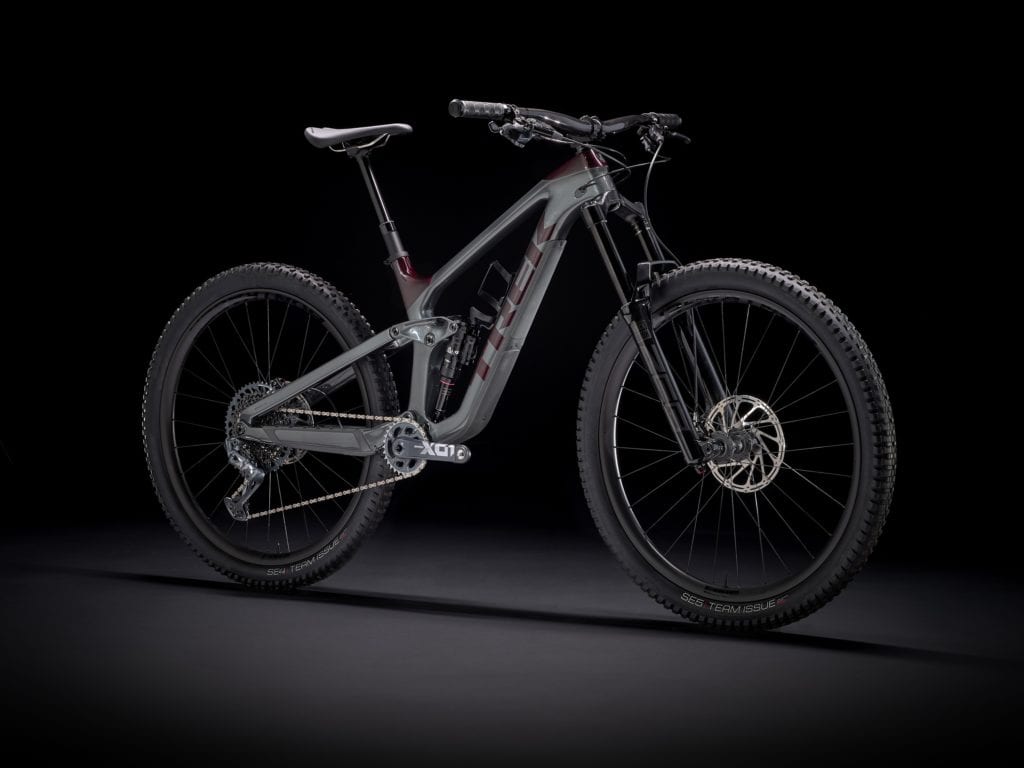 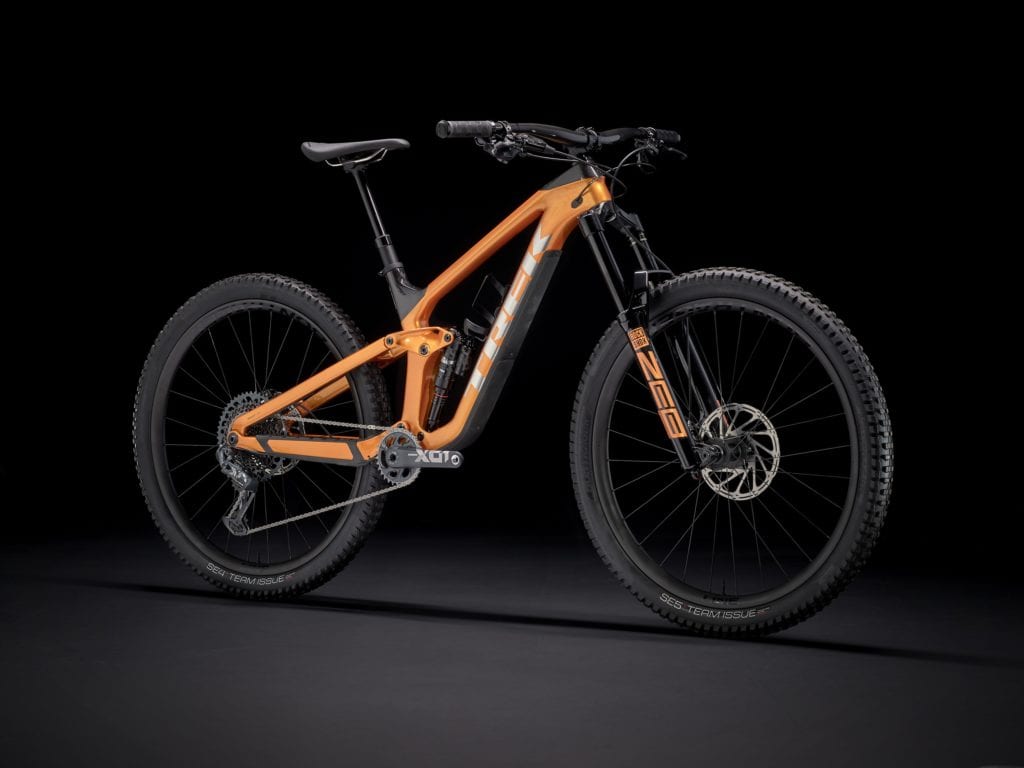 Including the eye-catching copper Slash 9.9 XO1 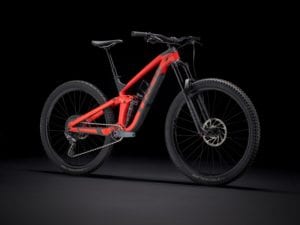 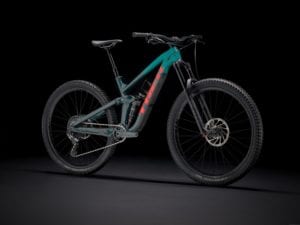 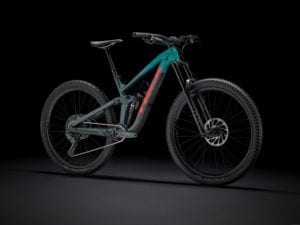 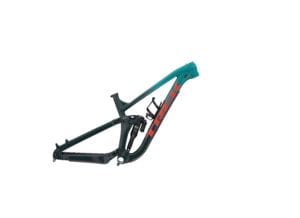 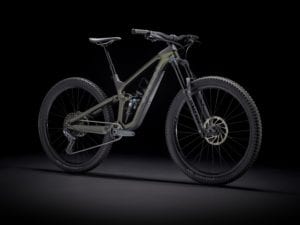 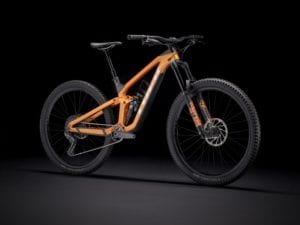 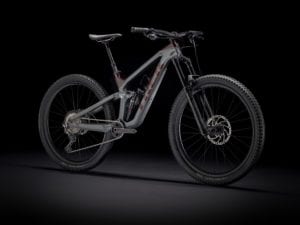 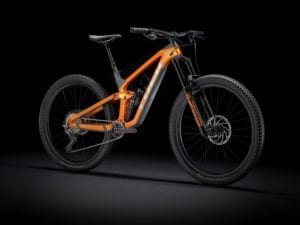 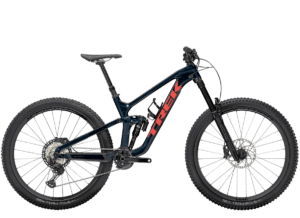 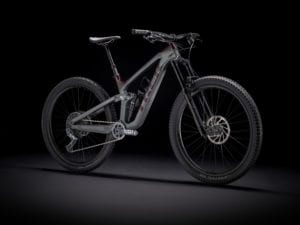 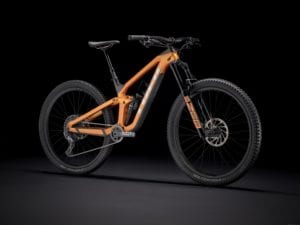 Trek is releasing two aluminum Slash models and three carbon fibre builds. Both carbon fibre and aluminum are available as a frameset-only option. The Slash 7 and 8 feature the aluminum frame, while the 9.7, 9.8 XC and 9.9 XO1 all use Trek’s OCLV Mountain carbon fibre frame.

Trek’s huge array of Project One custom paint program is available for the 9.8 and 9.9 frames. For 2021, Project One will include limited drivetrain and suspension options.