When a box containing a shiny set of Santa Cruz Reserve Carbon 30 wheels showed up at my door, I was stoked. They are beautiful rims and arrive nicely packaged, including a card signed personally by each wheel builder. As covered in Part I of this review, the Reserve 30 are great to ride, fast in corners, and make any bike look sharp. They are also supposed to be near-indestructible.

When the Santa Cruz launched the initial version of the Reserve, I’d watched Danny MacAskill do his best to flail the carbon fibre wheels, going to the extreme of riding down stair sets without tires before he could make a dent.

Perhaps left me with a false sense of confidence. MacAskill is leagues more talented on a bike than I can even comprehend being. All of Danny’s skill, turned toward the evil task of breaking pretty bike parts, still required such an exerted effort to make the Reserve wheels flinch. What chance was there that I would manage to damage them? I don’t have his grace on two wheels, sure. But I also lack the courage to try replicate much of the torture session he put his rims through in the video.

Into the woods: If a rim cracks in the forest …

Armed with the comforting knowledge that I could do anything Danny could – or, more accurately, that I was unlikely to unintentionally test the Reserves as harshly as MacAskill intentionally testing them – I joined some friends on a trip to a local, janky old freeride zone. I’d been riding the Reserves for a month at this point, and they’d already put up with a solid level of abuse in Whistler, Pemberton and all over Vancouver Island and I was confident in the wheel’s durability. “Old school freeride” in this case means slow speed drops to flat, or to a minimalist version of a transition. It’s not really the type of riding where the stiffness and acceleration of a carbon fibre rim has much of an advantage, and not really what any wheel is designed to do.

This is where I learned that there was one area of my riding where I could surpass the iconic Scottish trials rider. What took a full video of smashing, I accomplished in one, ill planned drop-to-flat.

Not on purpose, of course. But I did still manage to break the back rim. On a six-ish foot slow speed drop, one half of my back wheel found a sharp rock protruding from the “landing.” The rear end of my steel hard tail did nothing to soften the blow. There was the loud, unmistakable crunching sound of carbon fibre breaking.

So, it turns out carbon fibre wheels, like anything else, can break. It took some effort, and the Reserves survived a number of bottom-outs on rocks and cased landings prior to this. It took a particularly silly situation – there’s a reason why drop-to-flat moves have fallen out of favour – and a little bad luck to catch that rock for the rim to break. Half an inch to the left and I’d have been fine. But half an inch to the right, and both sidewalls would be wrecked. I also wasn’t the only one in our six person group to break a rim that day, with the other rider being on aluminum rims. 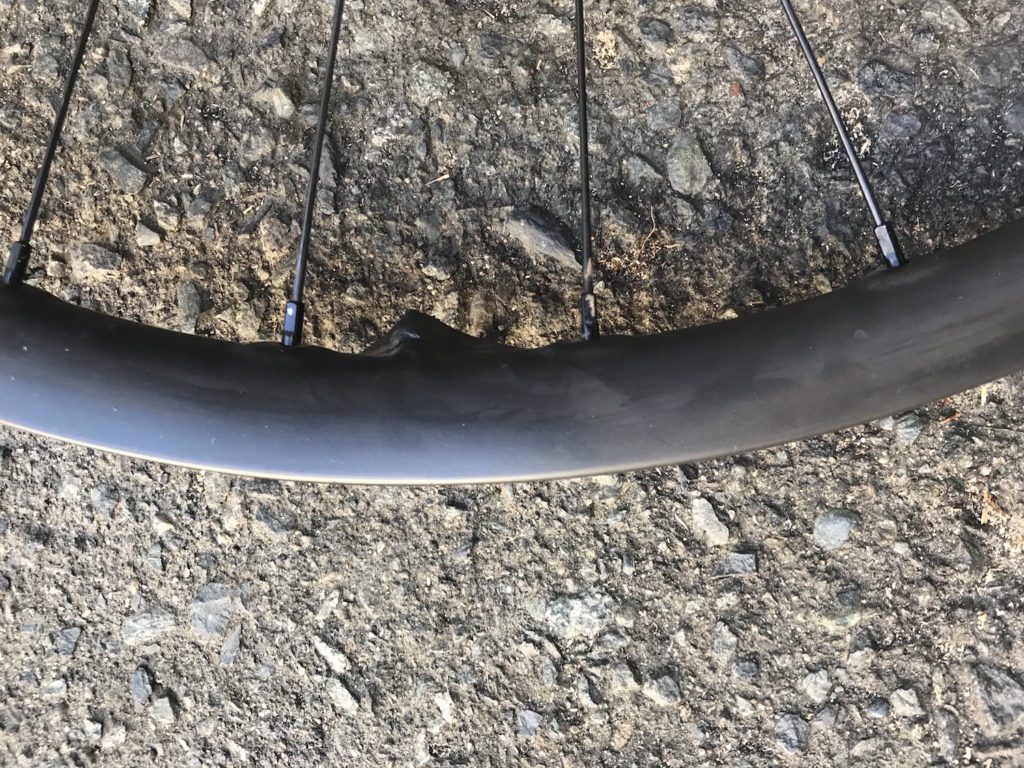 Doesn't look so bad from this side 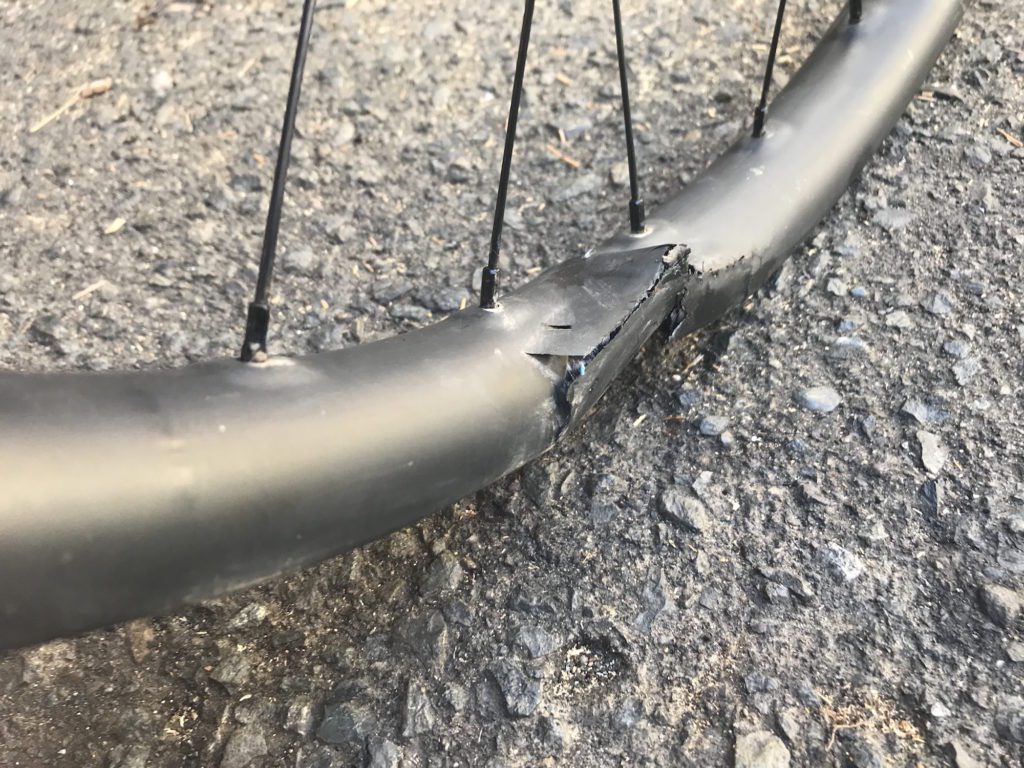 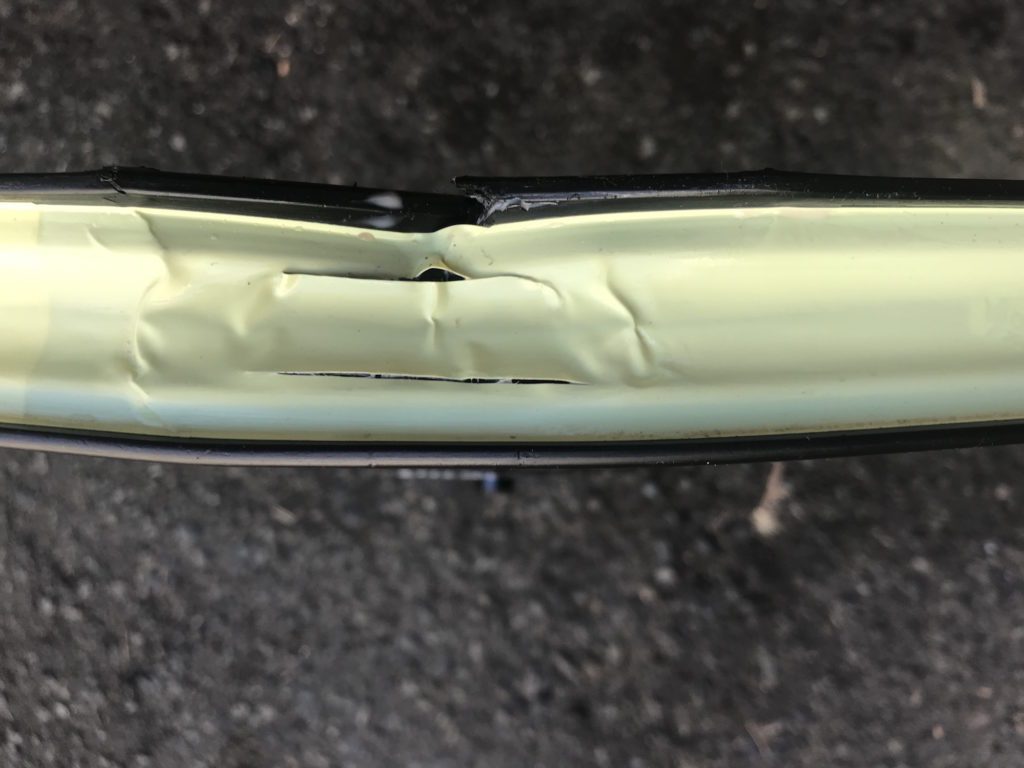 The rim was pushed out of true a little, but not by much. The damage was limited to one side of the wheel. 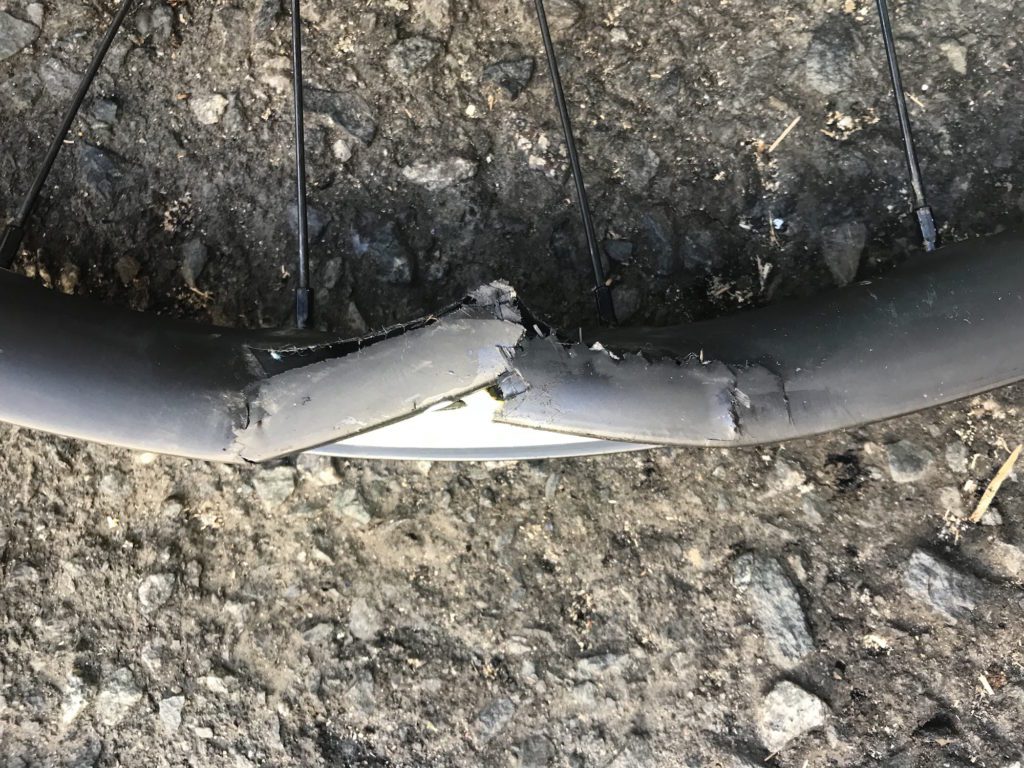 Full view of the damage. 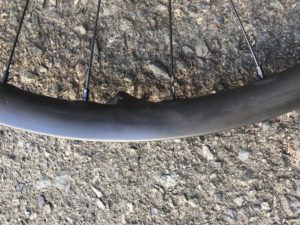 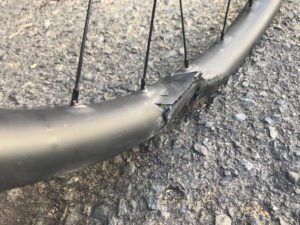 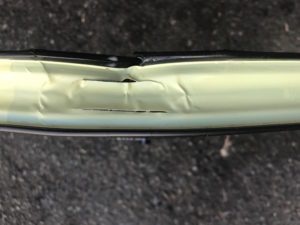 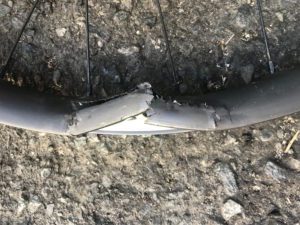 Out of the woods: Santa Cruz lifetime warranty in action

What was impressive about the Reserves was what happened next. I walked out – since carbon fibre does break quite catastrophically – and went home. I submitted a warranty form online that evening.

The next morning I got a call from California double check shipping address and hub spec. A couple days later (I’d submitted the form after hours on a Thursday), a new wheel arrived. Not just the rim, the whole wheel. All I had to do was swap the tire, cassette and rotor over, and I was on my way.

(Note: If you buy just a Reserve rim and build the wheel yourself, the warranty only covers the rim.)

The broken wheel was returned to a local Santa Cruz dealer, so you can’t just break rims and build up a collection of very nice hubs, and that was it. One form, and a couple parts.

The whole process was quicker than expected and surprisingly easy. Talking to Santa Cruz, you break a wheel while you’re on the road, you can get the wheel shipped to where you’ll be instead of your home address. 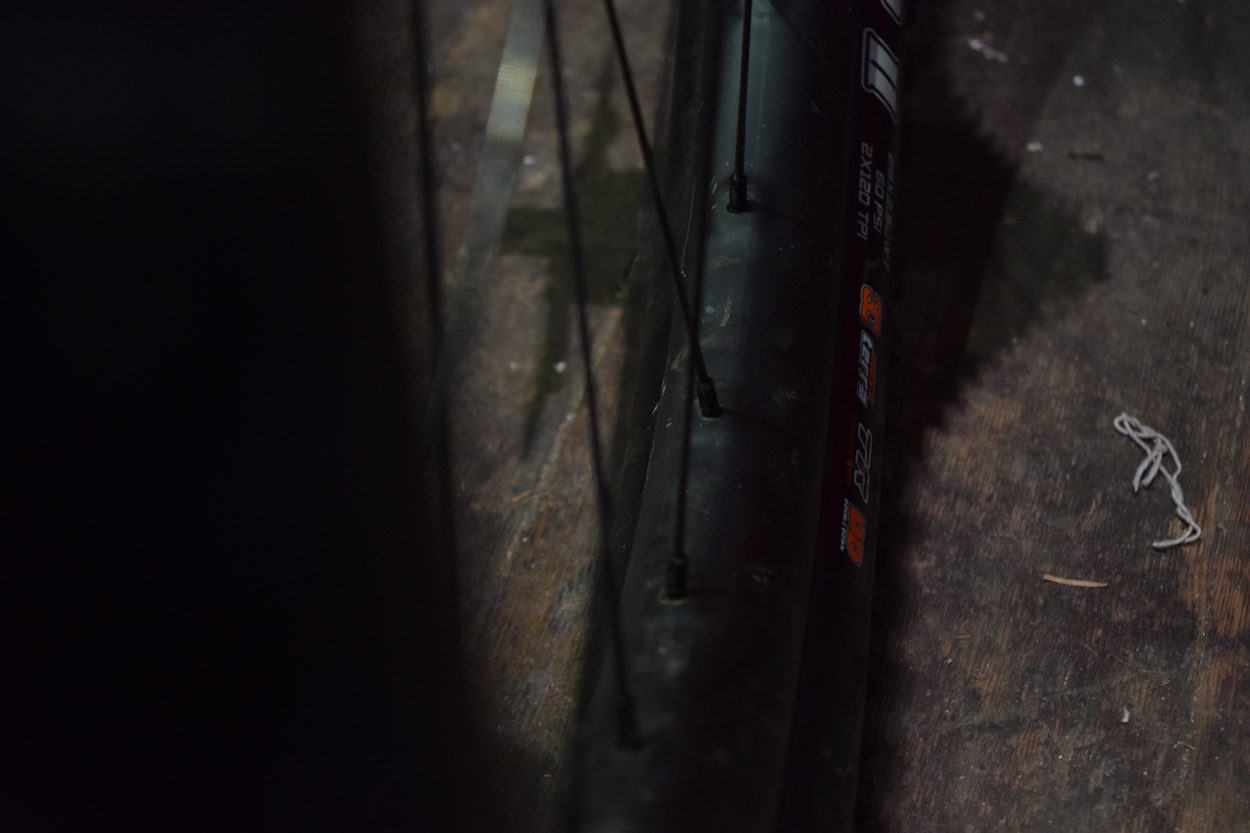 Are Santa Cruz carbon fibre Reserve wheels worth the $2,100 price tag? That depends on how you define value.

Things break. Whether they are aluminum or carbon fibre a wheel can only be expected to put up with so much abuse, whether it is intentional or the result of a mistake while riding. Considering the Reserve’s 1,831 gram weight, they dealt with the rest of the abuse I doled out, before and after warranty, impressively.

The extra cost of the Reserves covers two things: it performs better, as covered in Part I of this review. With Santa Cruz’s lifetime warranty, the initial buy-in means you have a wheel for, well, a lifetime. So long as you stay on a frame that matches the Reserve’s you own (wheel size, hub spacing standard, ect), you will have a new set of Reserve’s anytime you push the wheel too far. 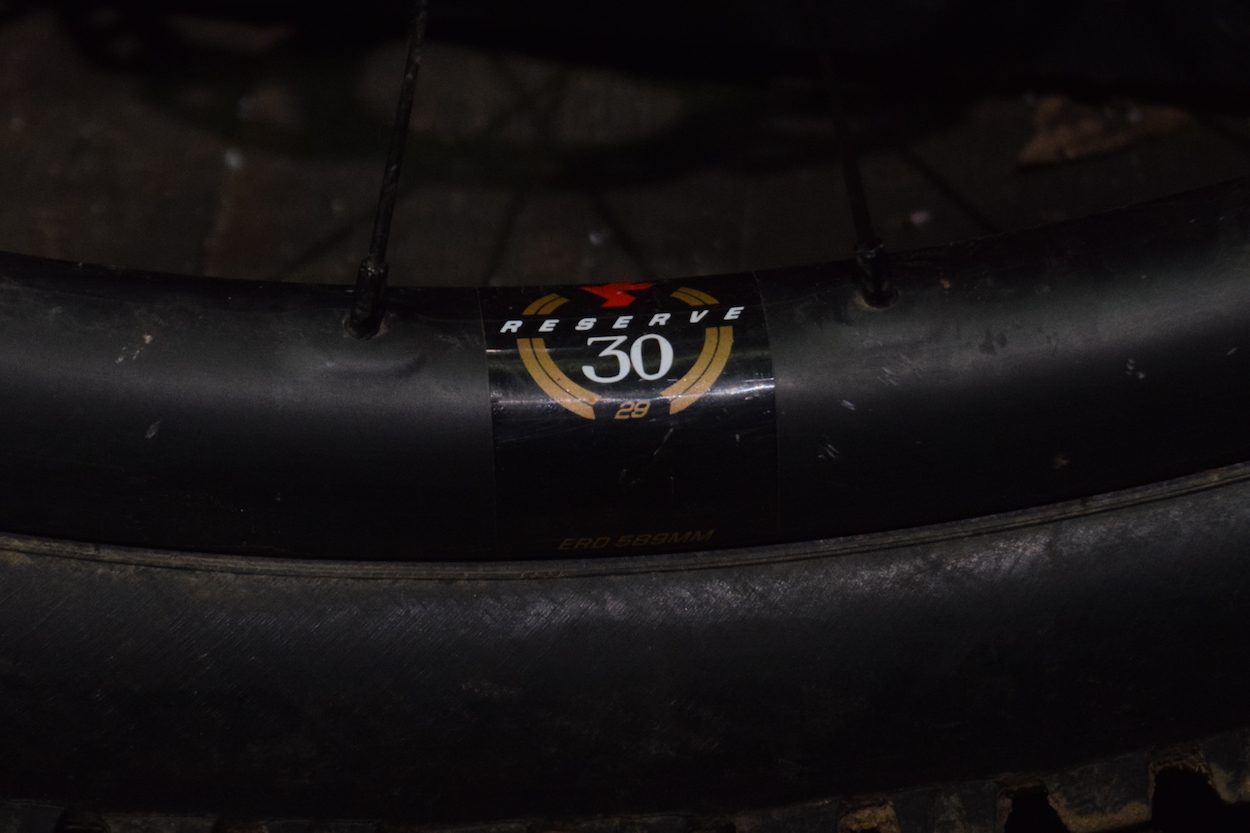 It’s that second part, having a wheel forever, that makes the Reserves seem like a pretty good deal. You may miss the occasional day of riding, or might not be able to ride out when you do break something. But when my friend and I both smashed wheels on the same day, I was the only one who had a new one waiting on my doorstep days later, free of charge.

It’s easy to say that Santa Cruz’s Reserve 30’s perform well, and look great. Whether they’re a good value to you depends on a couple factors. If you go through rims with any regularity, the cost of replacing wheels not covered by warranty adds up quickly. The Reserves aren’t indestructible, no rim is, but they are tough. If you’re light enough on the pedals that you can ride the same aluminum wheel for years, the warranty is less of a factor, and it comes down to performance.

So, is a $2,100 wheelset good value? It absolutely could be. The Reserves could be a wheelset that lasts you a lifetime, especially backed by a well-established brand like Santa Cruz that isn’t going anywhere anytime soon.