Santa Cruz has been in the mountain bike business for a long time, making carbon fibre frames for the most demanding riding possible. From Downhill to enduro and cross country, the California-based company is very experienced shaping material into intricate shapes, and making them tough enough to survive a trip down the mountain.

When Santa Cruz announced it was moving to make its own line of carbon fibre wheels in house it was big news. Especially since it came with the news the brand would be backing its new wheels with a full lifetime warranty.

Since then, the Reserve line has expanded to full downhill rims, as well as new gravel-focused options. I had the chance to test the all-rounder, Reserve 30 wheels at home in B.C. to see how they fared out on the trail. 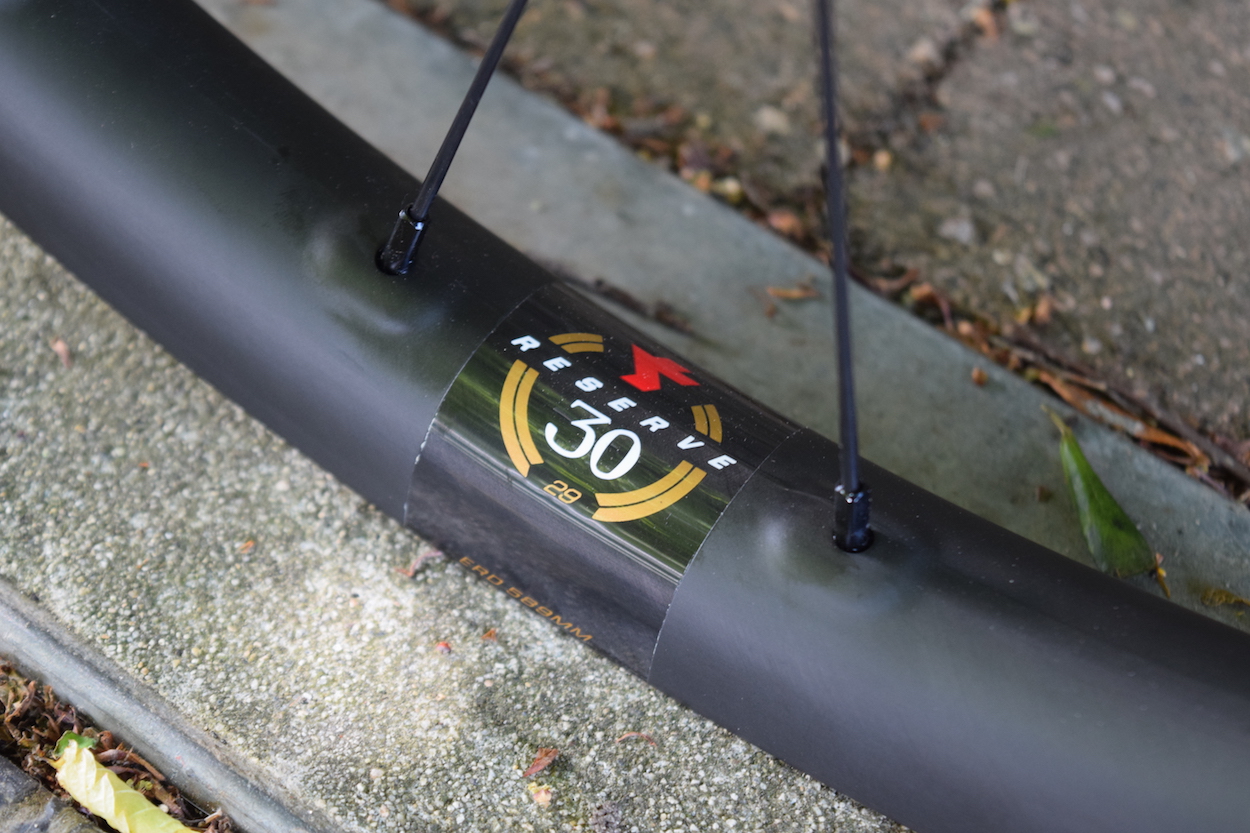 Santa Cruz’s carbon fibre wheels come with 28 spokes front and rear. Spoke holes are drilled with a 4 mm asymmetrical offset, instead of set in the center of the rim. This is supposed to make for a stronger and more balanced wheel, putting more even stress on the spokes. Santa Cruz balances weight and strength by putting material where it counts. A raised square of carbon fibre reinforces each spoke hole around the rim.

The Reserves have a generous 30-mm internal width, which sets them up well to work with the wider tires sizes that have become standard for trail and longer-travel bikes. External width is 36.4 mm, giving them a nice wide sidewall. Wider sidewalls aren’t just for increased strength, though they do that as well. It also makes it less likely that you will pinch-flat on hard compressions, when the tire casing is squished between the rim and … whatever you’ve slammed into. 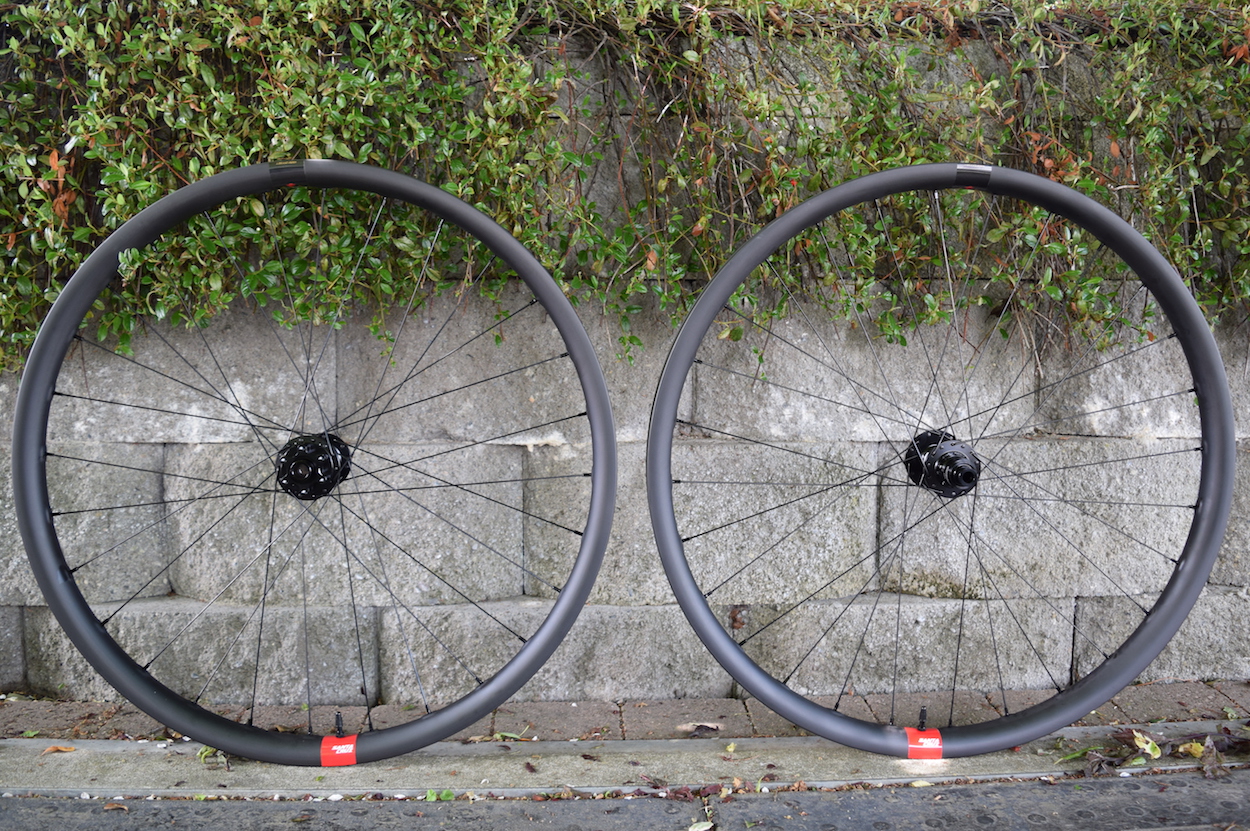 With ample support for 2.6″ tires, the Reserve 30’s will have you covered for a wide range of riding, all the way up to enduro. For more gravity-fed and pure DH racing, though, Santa Cruz now offers the Reserve DH. While only 1 mm wider than the Reserve 30, it is tuned for downhill with a tougher layup, thicker sidewalls, a rim thinner profile and higher spoke count than the Reserve 30.

Assembled with the DT Swiss 350 hubs, as tested, Reserves are available with XD or HG driver and come set up for your choice of torque or standard dropouts. You can also opt for Industry Nine or Chris King hubs. All three hub brands now make drivers for Shimano’s Microspline standard, making Reserves compatible with any current drivetrain. As a wheelset, the Reserve 30s weigh in at 1,831 grams. 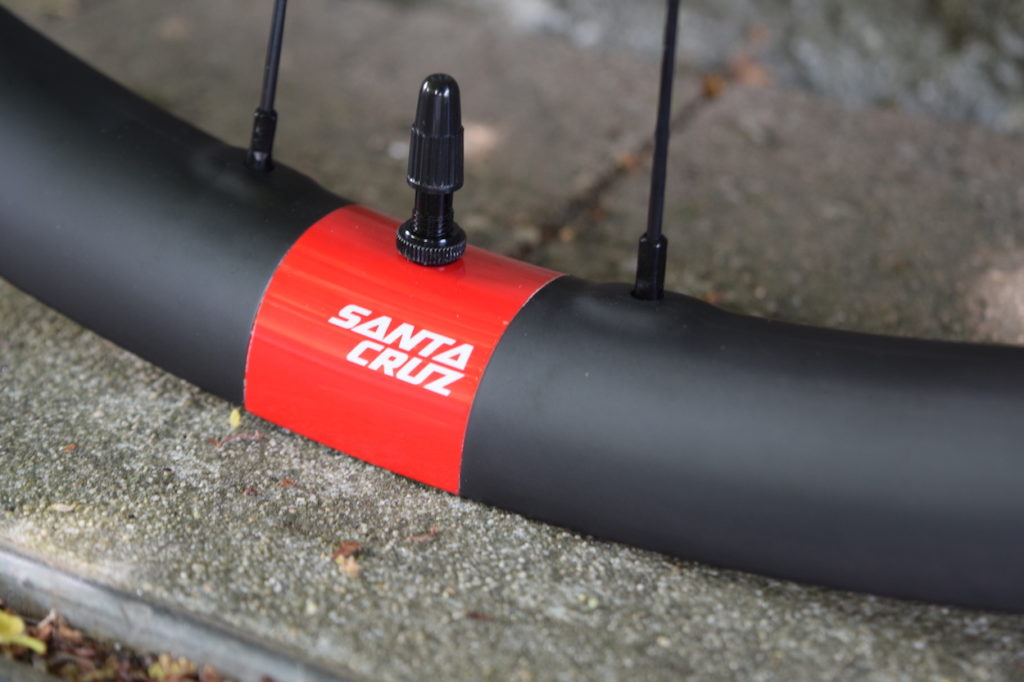 A sharp gloss finish, and a built up area reinforcing each spoke hole. 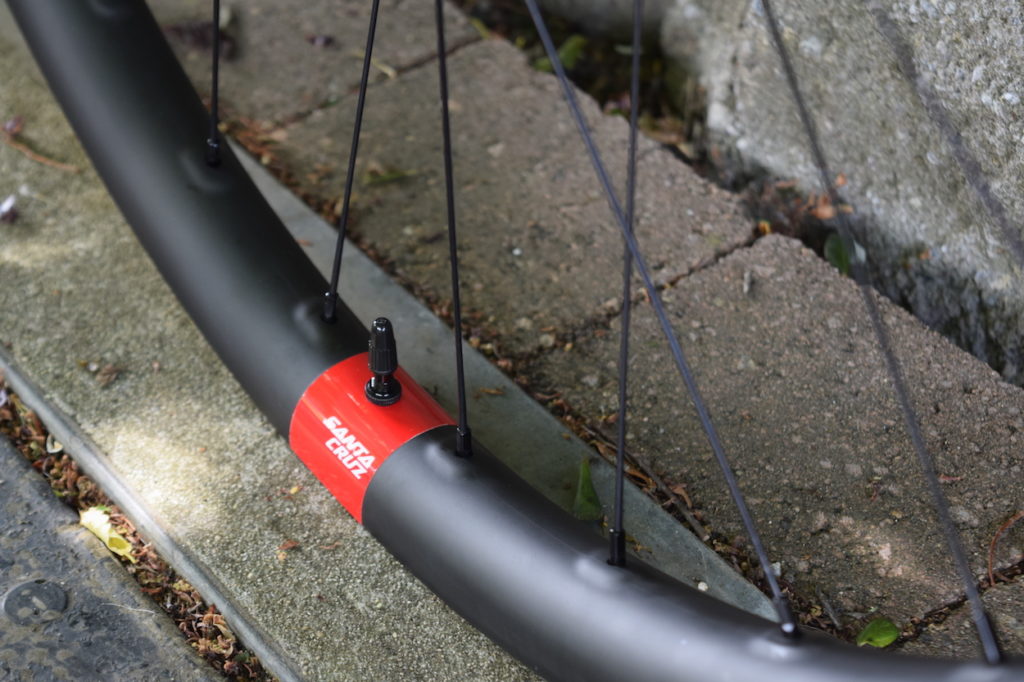 Santa Cruz builds the Reserves with a 4-mm offset spoke. 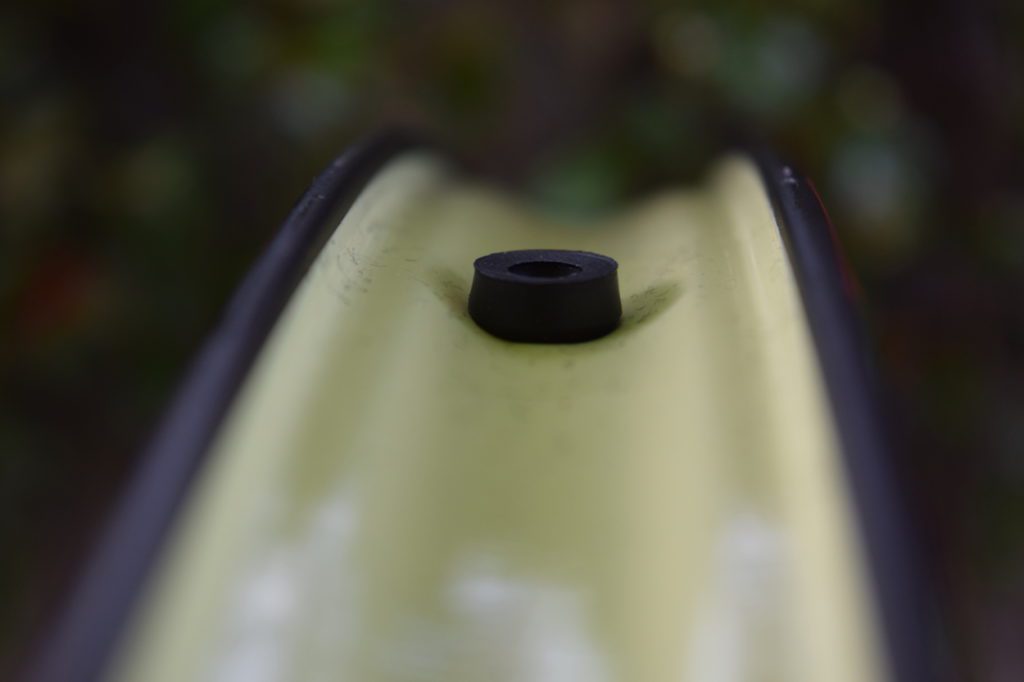 Thick, hookless sidewalls were easy to set up. 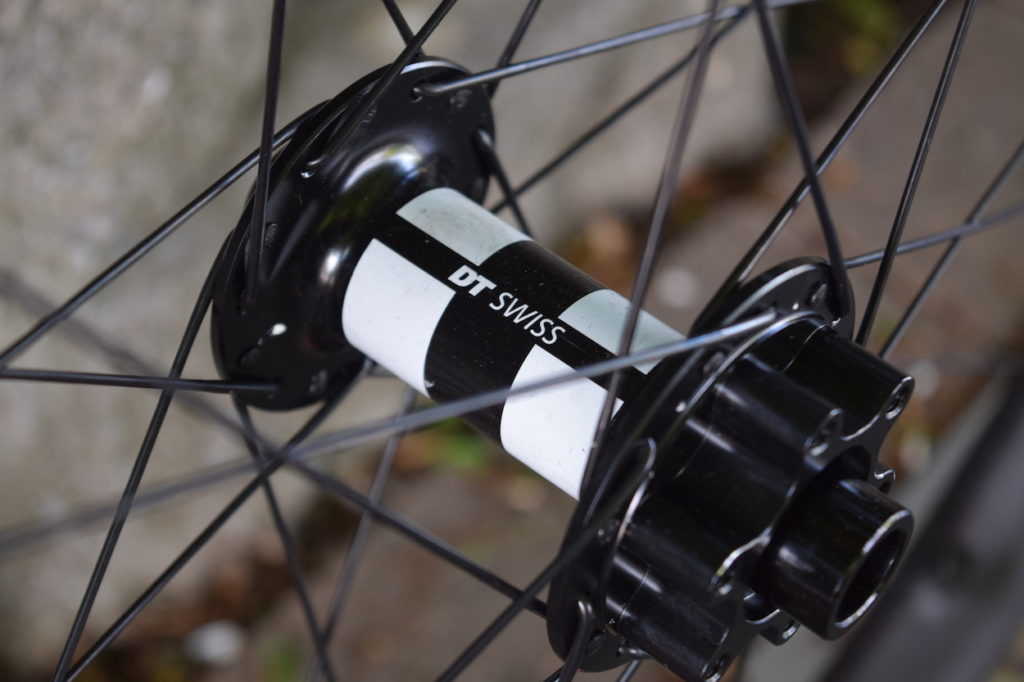 DT Swiss 350 hubs preformed reliably, as expected from one of the biggest names in hubs. 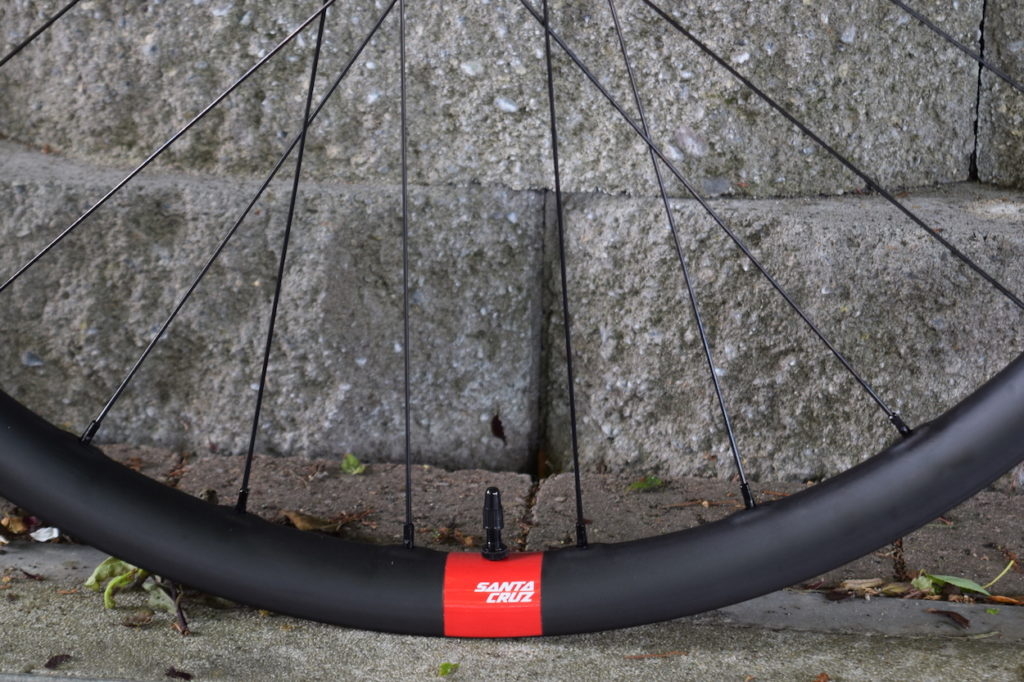 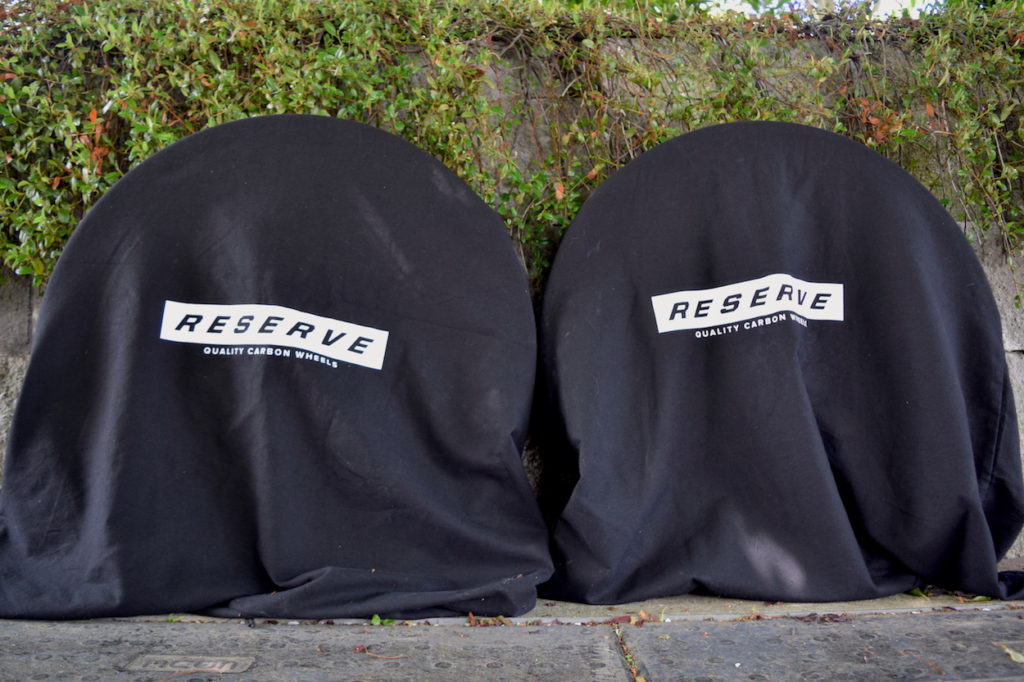 Each wheel comes in its own fabric bag. 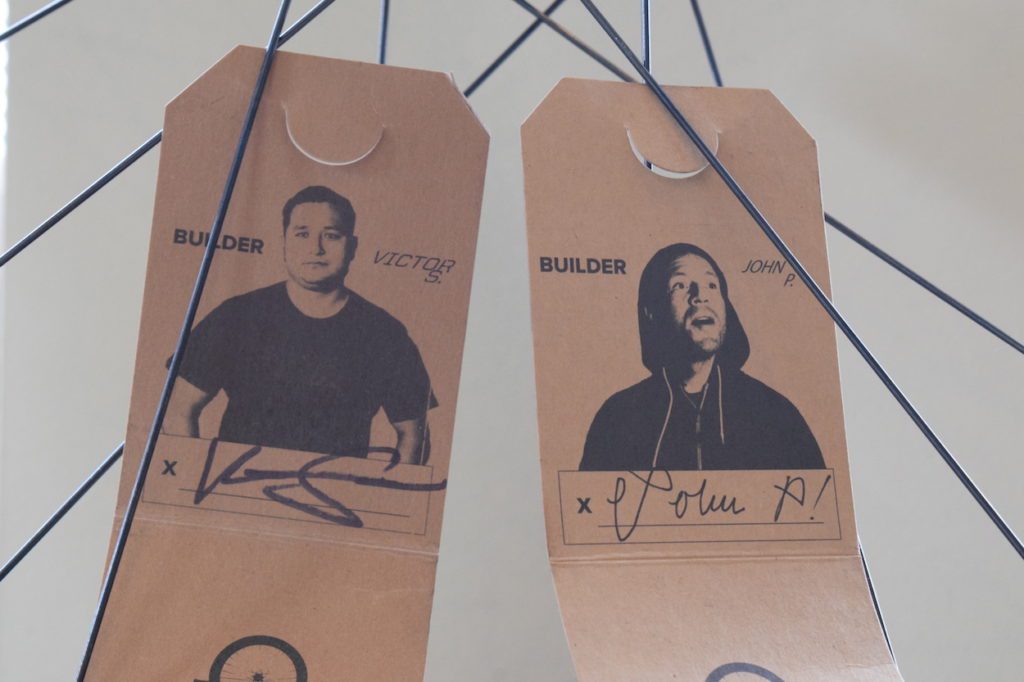 And each wheel comes with a card, signed by the person that build your wheel. 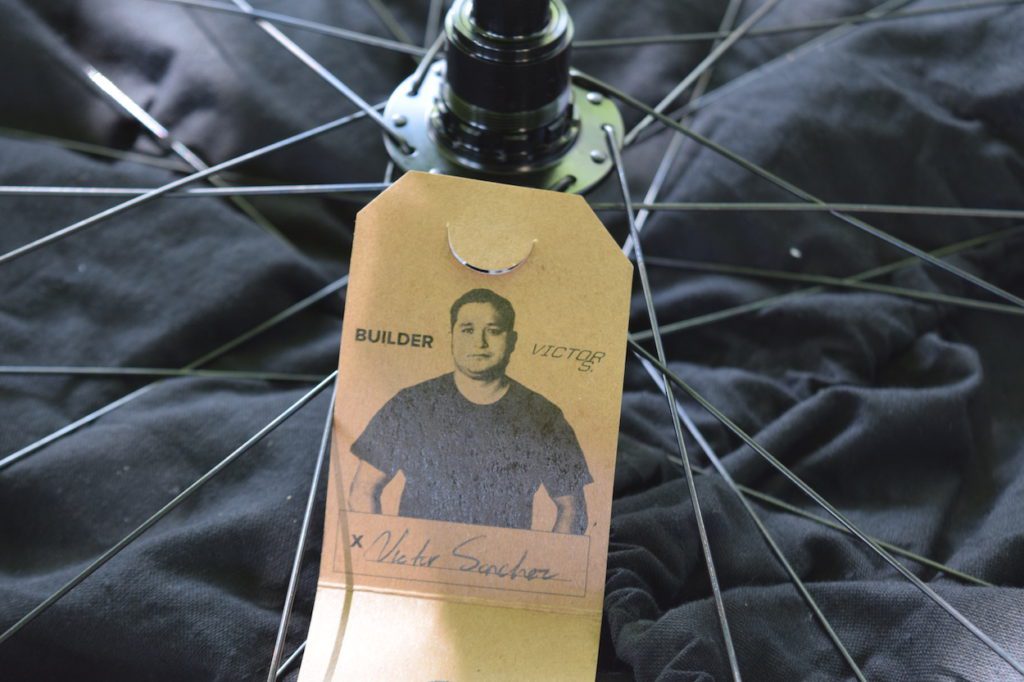 It's a very nice package, living up to the wheels price tag. 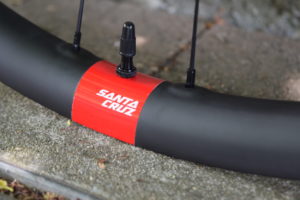 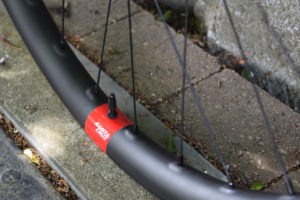 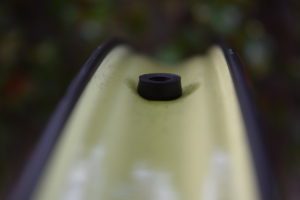 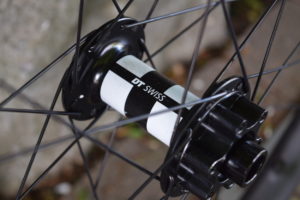 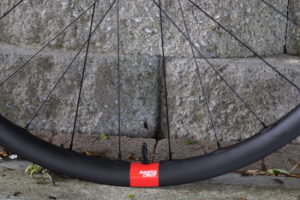 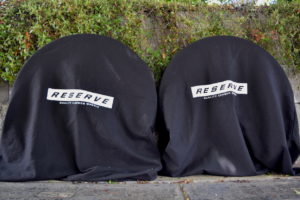 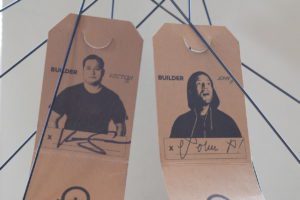 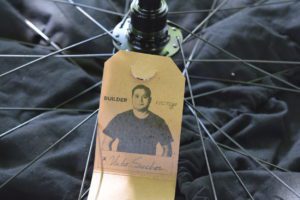 Out of the (very fancy) Box

Santa Cruz knows its Reserve wheels are a boutique item, and ships them accordingly. Inside the box, both wheels are wrapped in a reusable fabric wheel bag. The rest of the packaging is cardboard, and easily recyclable with no plastic wrapping. All Reserve wheels are build in house at Santa Cruz’s California HQ. Each wheel includes an individually signed card telling you who built your wheel.

Mounting the tires was simple and straight forward. Santa Cruz uses a straight sidewall instead of a hooked sidewall. The tires were easy to set up tubeless, seating with just a floor pump and tubeless sealant. I set up the Reserve 30’s with a 2.5″ Maxxis Minion DHF in the Wide Tire casing and 2.4″ Minion DHR, also in Maxxis’ WT casing, which is designed to keep a consistent tire profile on wider rims.

Minions stayed on the rims for the duration of the test, but the rims moved back and forth between several frames.  The Reserves saw time on a suspension enduro race bike, shorter travel trail bike and a Chromag Rootdown hardtail. 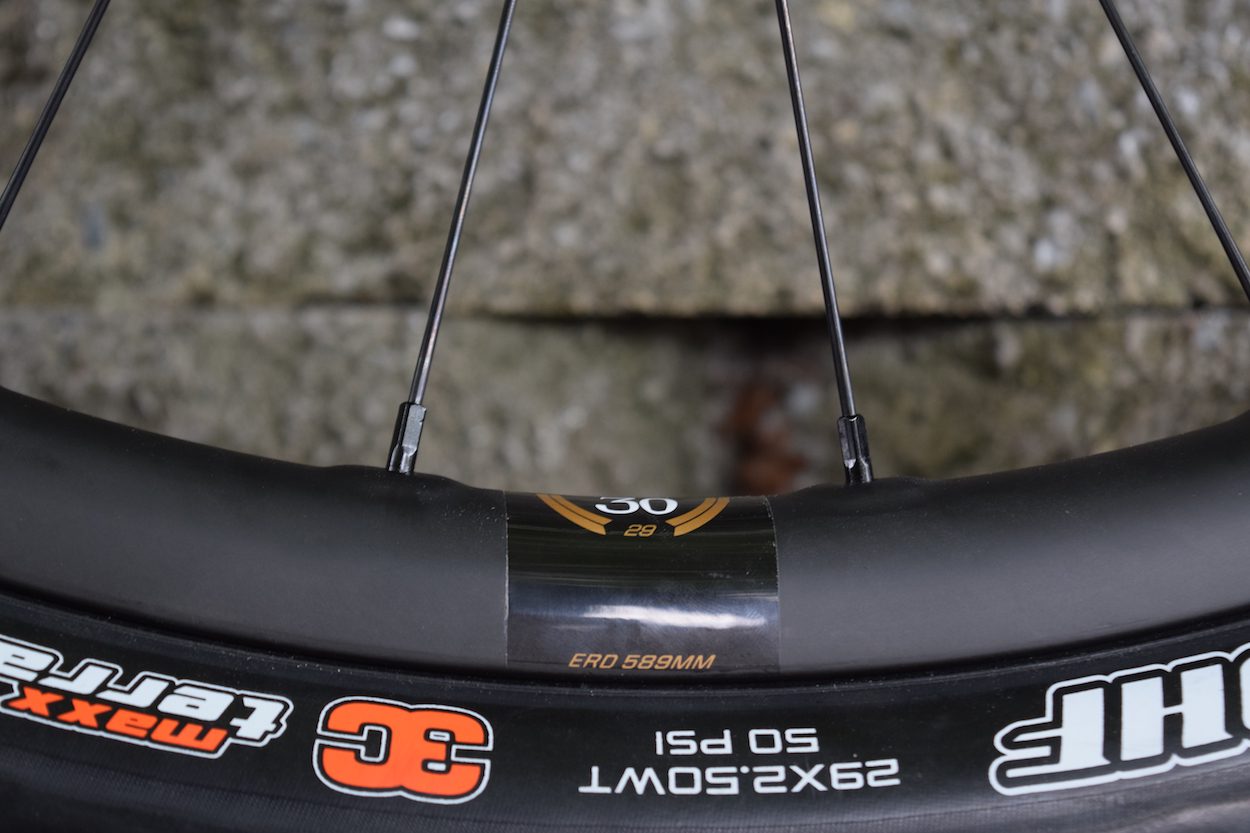 The Reserves didn’t take long to make an impression on the trail. The wheel’s quick acceleration could be felt right away. Standing up out of corners or sprinting, when you put the power down the wheels build speed fast. I really appreciated this on the hardtail, where quick, precise acceleration, and the Reserve’s ability to hold a line made it easier to work through technical sections, climbing and descending.

Cornering is the second place where the Reserves really stand apart from other wheels. They hold speed and track through corners in a way that is totally different than a softer or lower priced aluminum wheelset. The harder you push into a corner, especially nicely bermed corners, the faster you will come out on the other side. 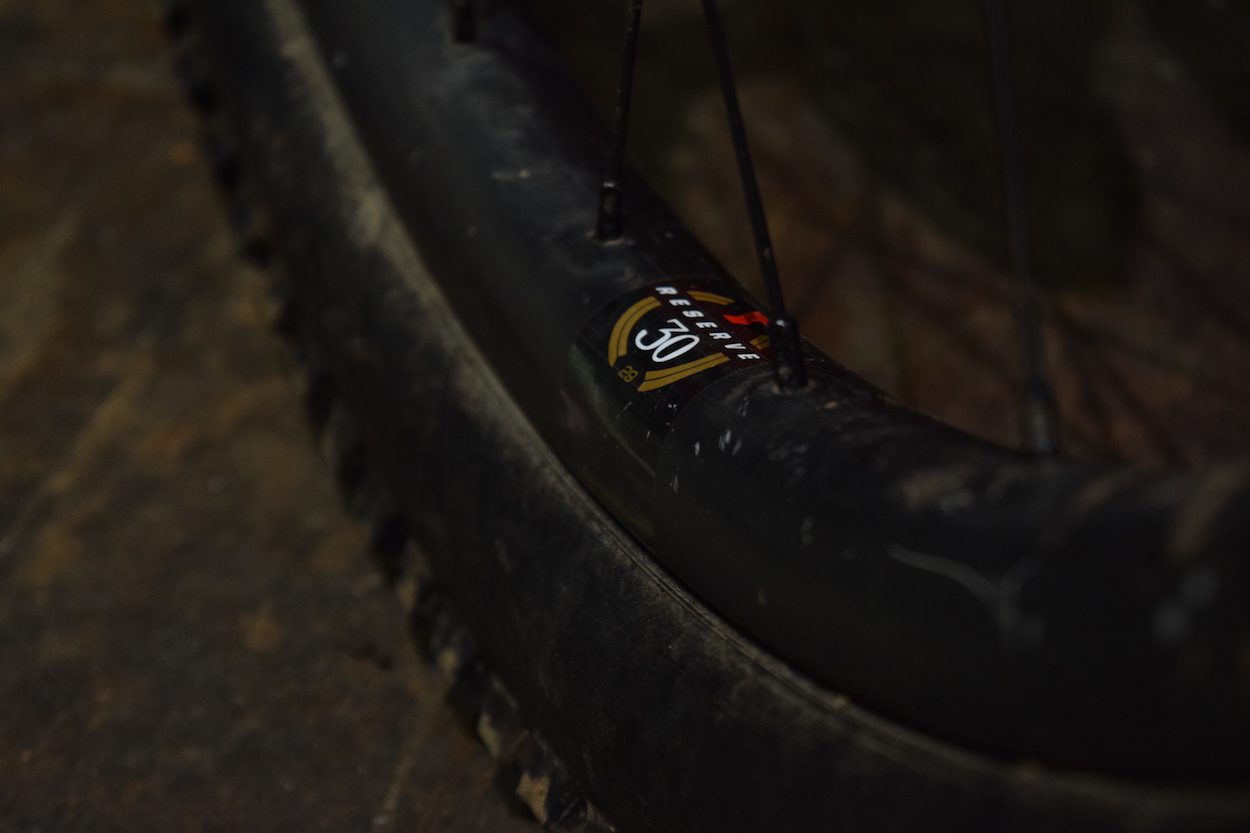 The matte finish on the Reserve rims is also quite easy to scratch. It didn’t seem to affect the durability or true of the rim, but I quickly accumulated several surface level dings and marks on the rim. Like the first scratch on a new bike, putting the first mark on brand new set of pricey carbon fibre hoops was hard. But, after a couple more, the scratches started to add character, like scars that tell a story of rides past. Not everyone will agree, or like seeing scratches on their expensive carbon fibre hoops, but it does have a certain aesthetic appeal.

I did break a spoke once. The rim held perfectly true, event down one spoke, letting me finish out the remaining two hours of riding without a problem. For a broken spoke, that was a bonus. But the downside of carbon fibre is that when the rim fails, it fails dramatically. Where aluminum rims can remain functional with a few dents, carbon fibre cracks. Unfortunately, I had the chance to test the Reserves to failure, and test Santa Cruz’s warranty. It wasn’t easy, and I did slam them into a number of rocks over the course of the test, but the wheel did eventually fail. More on that in Part II of this test … 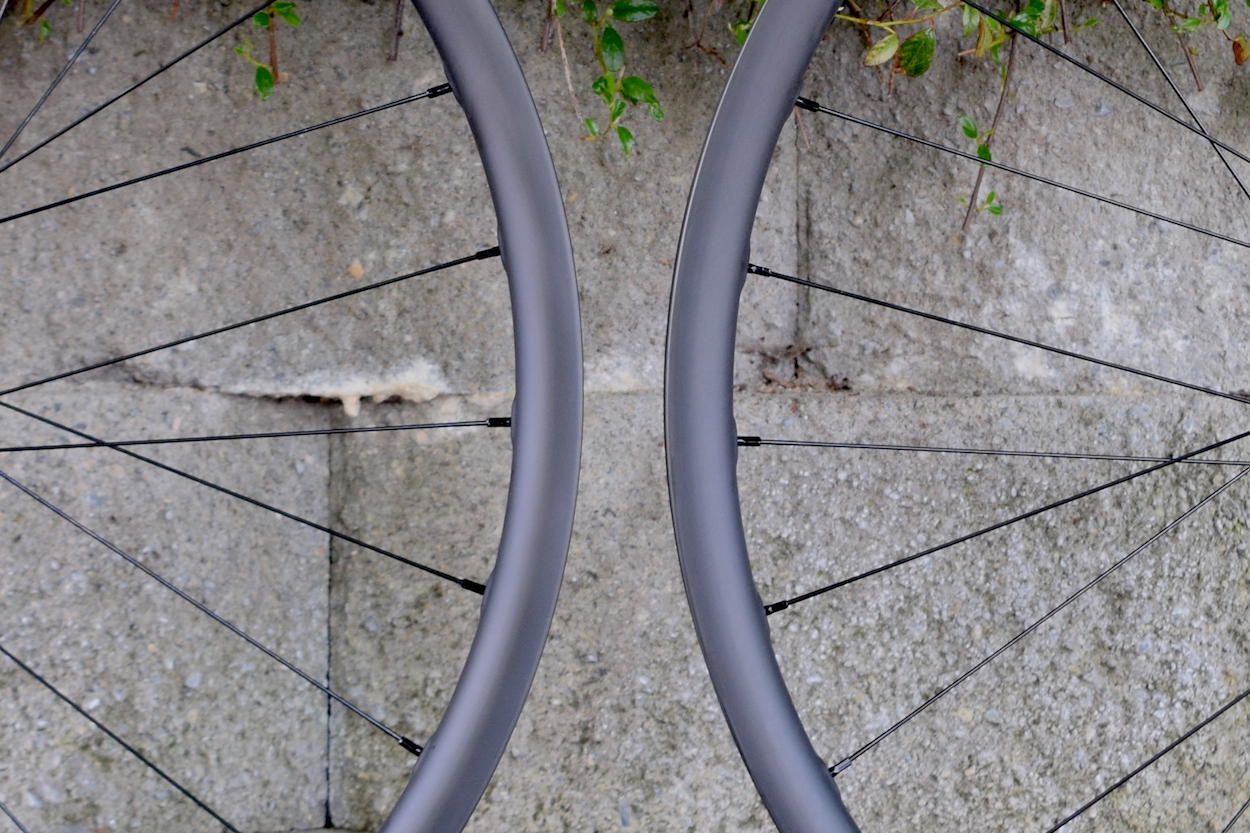 Santa Cruz’s Reserve 30 improve acceleration, when pedaling, and feel like they corner on rails. At the same time, they’re not so stiff that I felt like I was being beat up when I put them on the Chromag. The matte finish on the Reserve’s also looks incredible, even with a few scratches in them. This doesn’t impact performance empirically, but when you drop over two grand on a set of wheels, you kind of want them to look nice.

At $2,100 with DT Swiss 350 hubs, they are not inexpensive. That price does include Santa Cruz’s lifetime warranty, so the value equation looks a little better if you consider them as a long-term investment. Speaking of the warranty, stay tuned for Part II of our Reserve 30 test where we test that warranty. It’s a crucial part of the Reserve test, so we’re holding back our full review until then. As you’ll see, that’s where the test gets interesting.