Girona, Spain is one of the top European bases for professional riders from cold climates. Canadians such as Michael Woods (EF Education First) and Karol-Ann Canuel (Boels-Dolmans) spend significant time between races and during their off-season in Girona. Cyclo-tourists flock there for the pristine roads of Catalunya that twist through the fields, mountains, coastal areas and forests of the beautiful region. It was here that Italian component manufacturer Campagnolo brought the media for a first ride on their WorldTour race tried-and-tested Super Record EPS 12 electronic groupset. 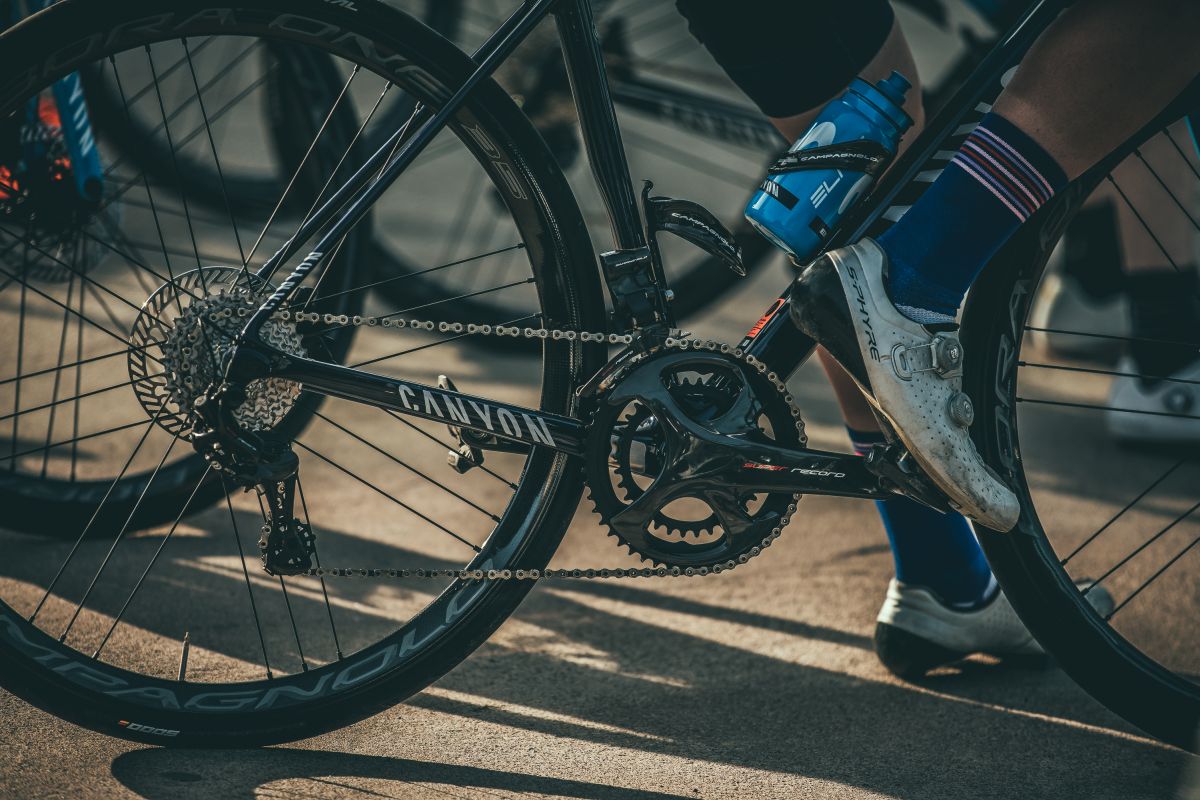 Campagnolo was the first of the major component manufacturers to launch a 12-speed mechanical groupset and have followed that up a year later with the EPS version, currently only available in Super Record. It’s the groupset that Alejandro Valverde took his first win in the rainbow stripes in. Riders from WorldTour teams Lotto-Soudal and Movistar have won multiple races already in 2019 on Super Record EPS 12. It’s a gruppo geared towards WorldTour competition, designed for in race situations. 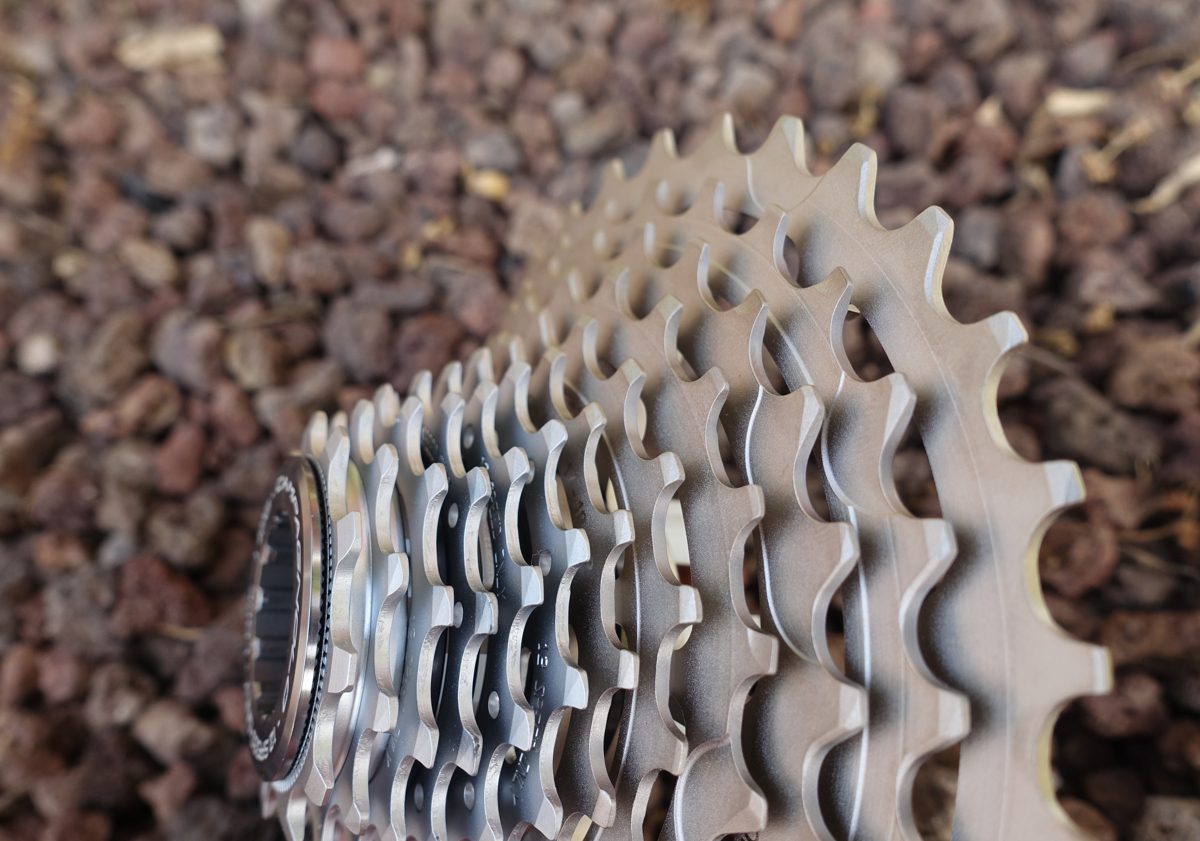 The Campagnolo Super Record EPS 12 takes its cues from the mechanical version of the 12-speed transmission. That means Campagnolo has two 12-cog cassettes—11–29 and 11–32—for its Super Record EPS gruppo. The largest six sprockets are part of two single-piece triplets. Each triplet is machined steel. The smaller six cogs are single units separated by aluminum spacers. The smallest six sprockets increase in one-tooth increments starting at the 11-tooth in the first position. 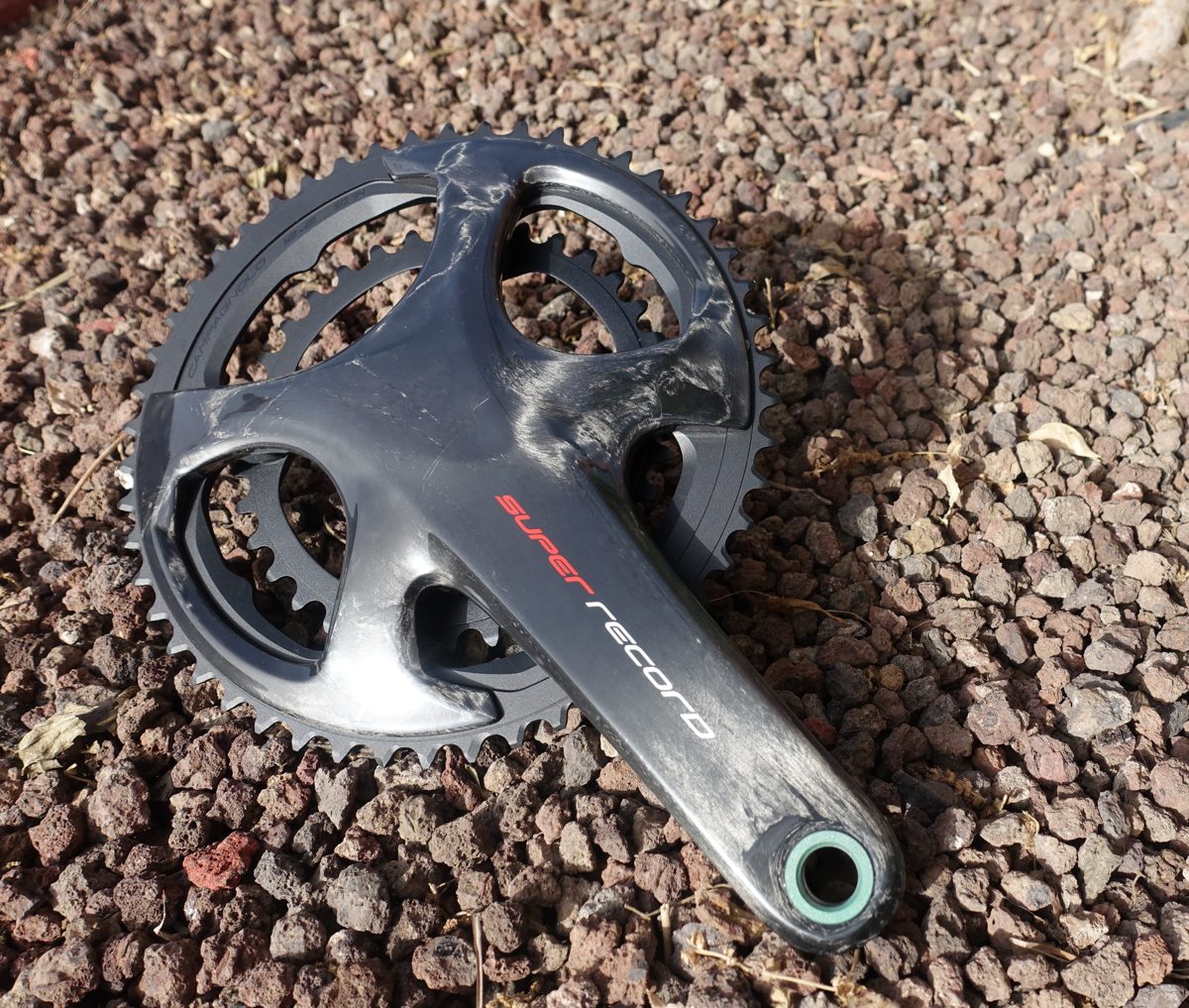 The Super Record 4 arm, 8 bolt crank has a more aerodynamic design and is structurally more rigid than its 11-speed predecessor. component uses CULT (ceramic ultimate level technology) bearings, which Campy says are nine times smoother than stainless-steel bearings. The shiny finish on the crank is not only aesthetically stunning but protects the carbon underneath from UV damage from extended time in the sun.

Campagnolo’s disc brakes have received a minor update with the pads receiving a total overhaul. Not only have Campagnolo changed the resin but the brake pads have a new steel body to better dissipate heat and feature a mechanical spring to aid the already excellent magnetic spring with quicker return after braking. The new organic resin compound improves wear life which could be quite short on the previous version in very tough conditions. Campagnolo say the durability is improved without compromising performance. 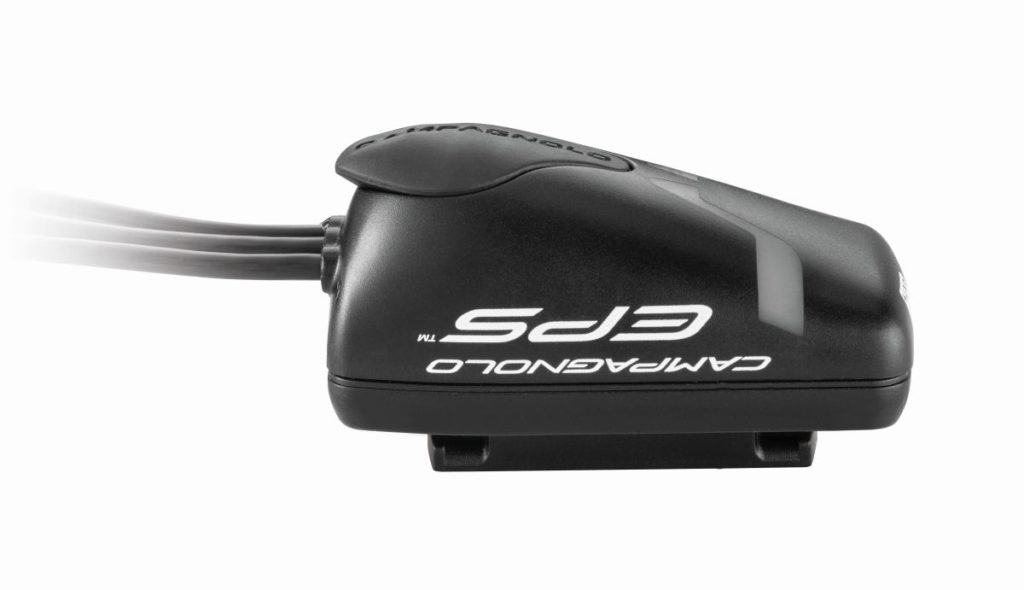 The junction box of the new EPS 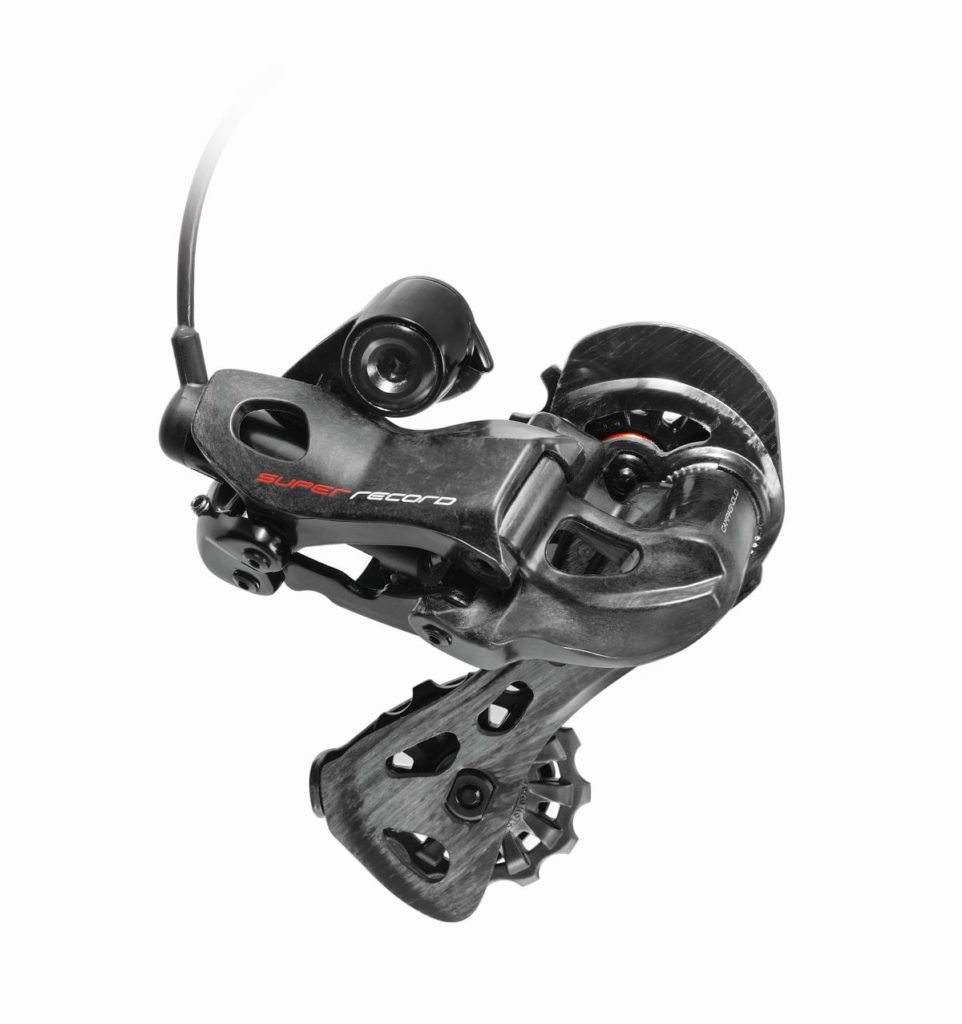 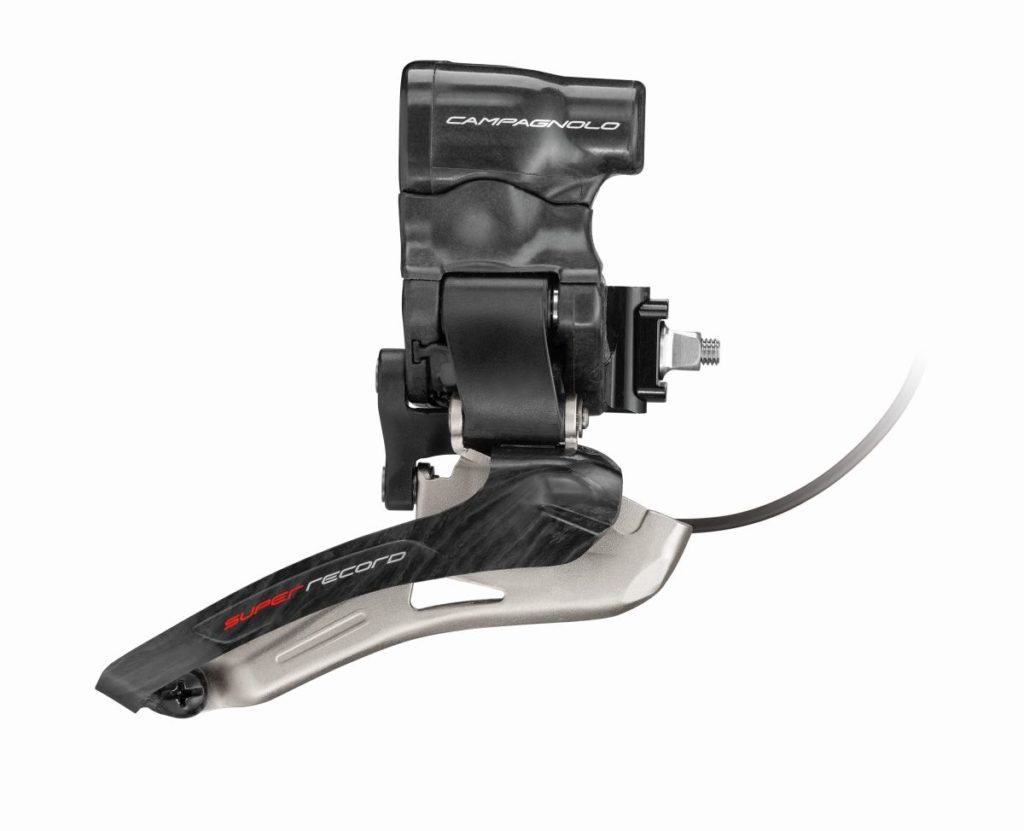 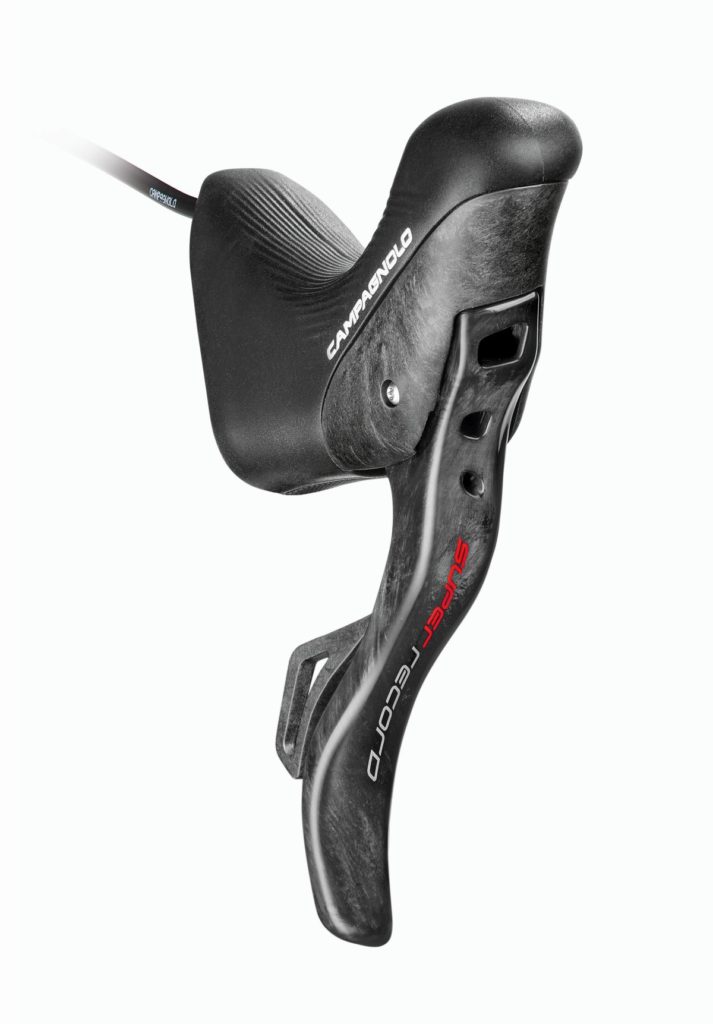 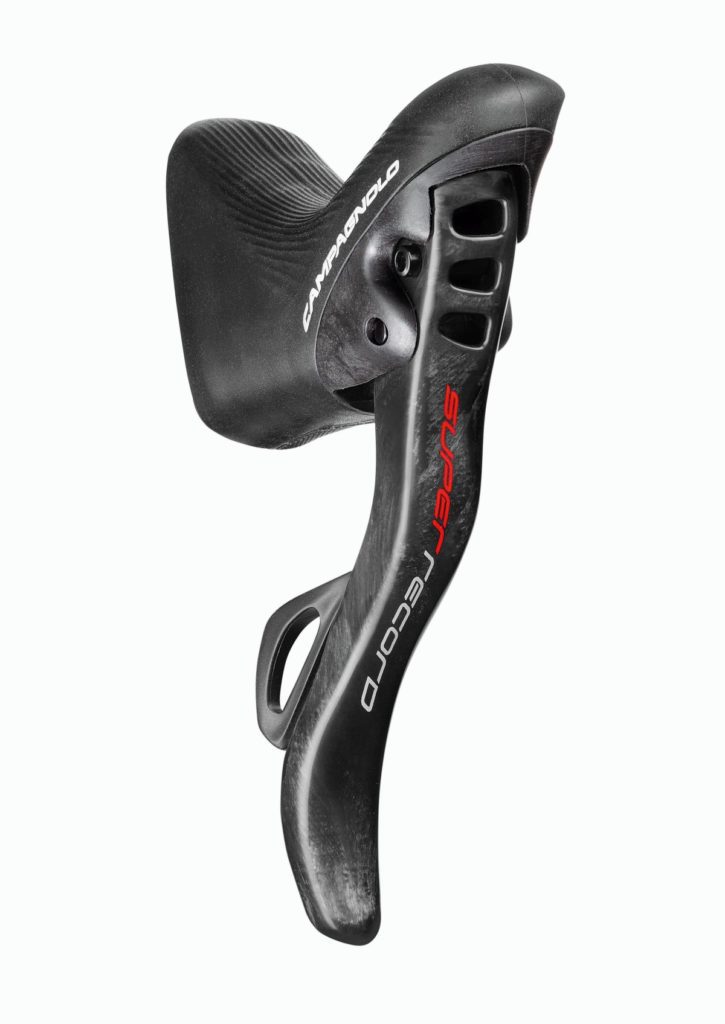 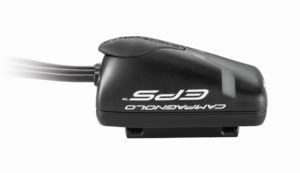 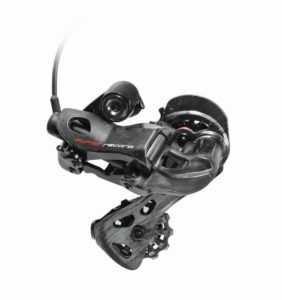 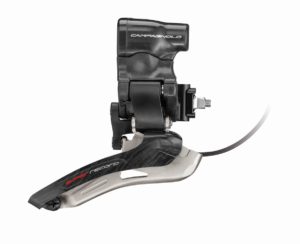 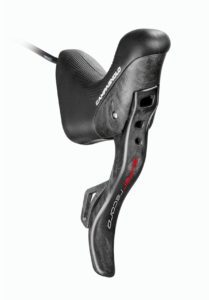 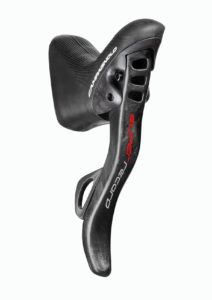 Aesthetically, the major differences between the mechanical and electronic versions of Campagnolo’s 12-speed Super Record are subtle. There’s the presence of the junction box which could be mounted on the bottom of the stem or in the end of the handlebars. On the derailleurs there are the motors to perform the shifts and of course wires replace the shift cables. Underneath the surface there’s more going on.

Like the mechanical version, the rear EPS derailleur has a 72.5-mm-long cage, allowing it to work with both the 11–29 and 11–32 cassettes. On that cage, the top jockey wheel, with its 12 teeth, is larger than its predecessor. Its teeth are also higher to increase precision.

Unlike the mechanical version, the derailleur does not feature 3D Embrace technology instead just using Embrace which gives the derailleur better chain wrap and thus power transfer. It also positions the rear derailleur vertically closer to the cassette. 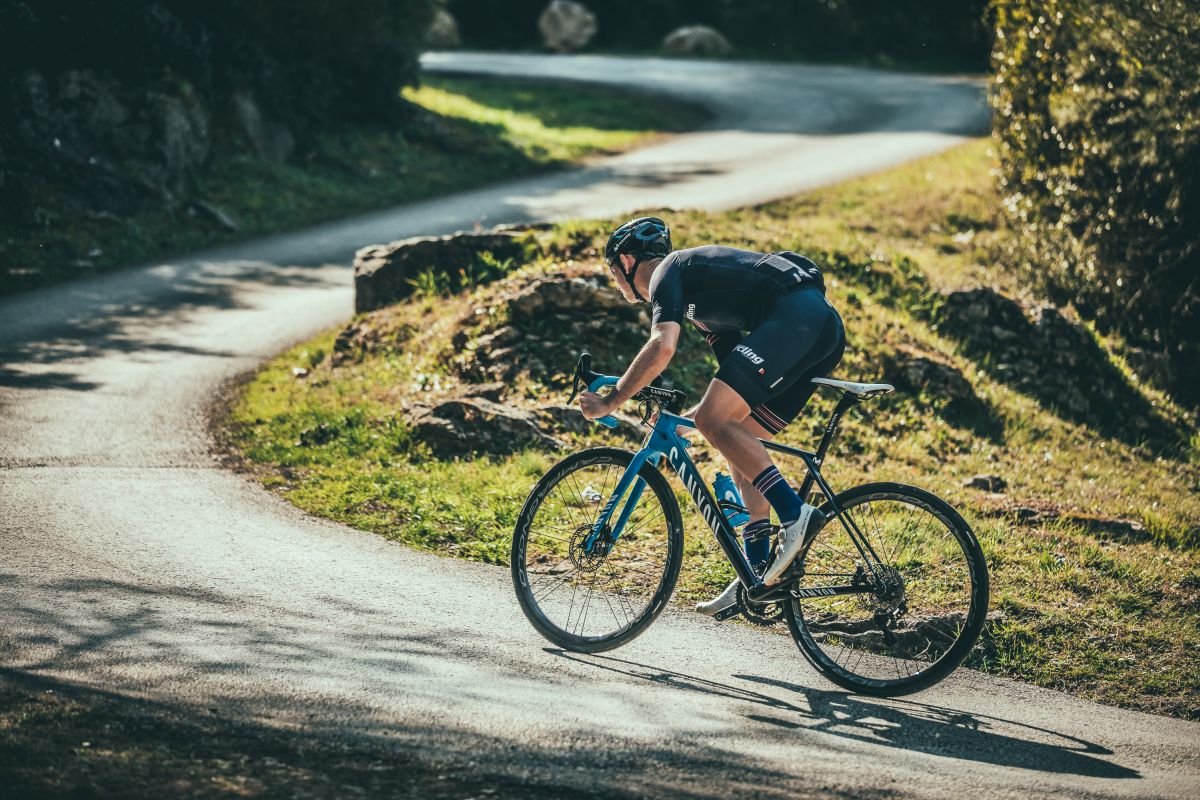 Like with the mechanical front derailleur, Campagnolo have updated the swing on the EPS cage for a powerful and reliable shifting experience. The new cage design takes into account the differences between a mechanical and an electronic shift, so is not identical to the mechanical version. It uses an aluminum inner cage, carbon ﬁber outer cage and upper body, and titanium ﬁxing bolt.

Campagnolo says the new motors produce powerful torque to be able to perform precise and reliable shifts in all conditions even under heavy load. So the user doesn’t need to perform trim adjustments manually, the front and rear derailleurs communicate to endure the chain is never touching the derailleur cage.

The ergopower levers aesthetically look the same as the mechanical version but instead of mechanical components under the surface, the shifting is now handled by electronics.

The levers continue to utilize Campagnolo’s one-lever-one-action principal with the updated bigger and better placed thumb shifter and thoughtfully designed levers to fit different hand shapes. Adjustments to the lever position and braking performance provide adjustability to suit any rider. Multi-shift technology allows the rider to hold the thumb or shift lever to perform up to 12 consecutive up or down shifts. The shift levers incorporate multi-dome tech to provide tactical feedback at the request of their pro athletes.

The mode buttons are located behind the thumb shift lever on both right and left commands. These buttons can be used to check battery life, run diagnostics, make derailleur adjustments even when pedalling, connect to a smart phone, lights or a Garmin, and interact with the MyCampy app.

The new Power Unit V4 is slightly bigger than the previous generation but provides 10 per cent more battery life to the groupset. It’s designed to last for months under a WorldTour rider. There are two adapters to mount it either in the seat post or downtube of a frame.

To ensure there is no water penetration, the cables are all welded into place. While this can make maintenance or component replacements more difficult, Campagnolo say it also makes water penetration into the system very unlikely. 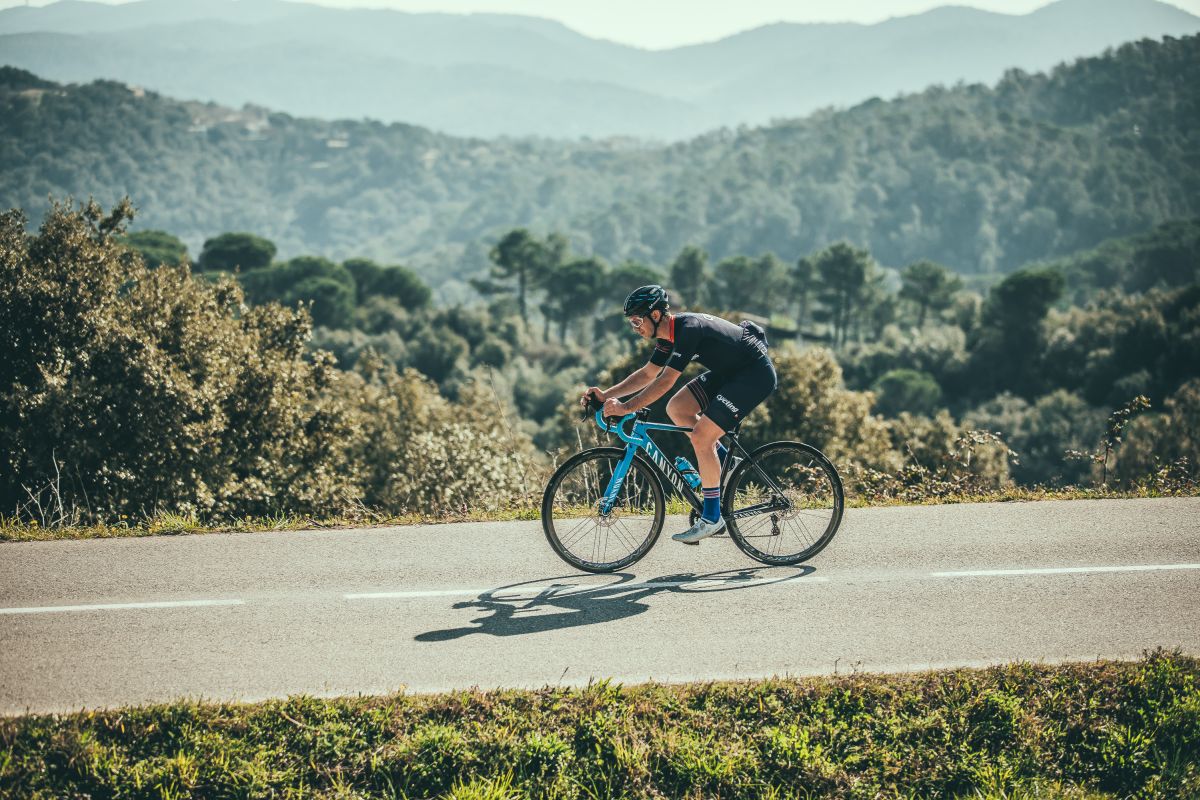 Riding the Girona hills with EPS 12

The Super Record EPS 12 hydraulic disc groupset I tested was mounted on team issue Canyon Ultimate CF SLX frames emblazoned in Movistar’s team colours with Campagnolo Bora One 35 wheels. The route to the east of Girona had two undulating climbs which allowed me to appreciate the greater choice a 12-speed groupset provides allowing me to always find the right gear combination to suit my preferred cadence.

From riding the H11 groupset, I have come to really appreciate the 8-mm of extra height on the disc brake version of the Ergopowers which I comfortably can find multiple hand holds on. The curvy shift and better placed thumb levers make operating the new groupset feel very natural requiring no adjustment in my various chosen hand positions on the hoods or in the drops.

Feedback on shifts was a little more subtle than I would have liked. Being accustomed to the very positive experience of shifting with Campagnolo’s mechanical groupsets, the lever’s motion is the same but with a more subtle action. The rear derailleur moved across the cassette precisely and on multiple occasions, I performed shifts under-load which never caused a problem. Each shift comes with signature Campagnolo feedback giving me the signal I had moved into another gear which makes the Vincenza-based company’s components a joy to operate.

The front shifts felt similarly precise though there was sometimes a slight delay on trims in lesser used gear combinations. The EPS groupset did require a moment to settle in when on one occasion I performed in quick succession shifts at low cadence on both the front and rear derailleurs.

On one of the hills, I foolishly tried to keep pace with Movistar’s Carlos Barbero as he did a progression interval. The ramp up in pace had me furiously switching gears to try to keep my cadence right as I put power through the pedals.

I was eventually spectacularly blown off Barbero’s wheel but when I finally caught my breath at the top of the climb I was impressed by the groupset’s performance in this frantic moment. I didn’t have to worry about applying enough force to perform a shift, doing it at precisely the right moment in my pedal stroke or whether things would fall into place properly. Instead, I could just mindlessly suffer for a brief moment longer. For performance oriented riders, this reliability under pressure is exactly what’s wanted.

The new brake pads feel as excellent as the previous version with plenty of bite and modulation. While I have rarely had return issues on the previous pads, the mechanical spring endured their was never any rub on the 160 mm rotors when not applying force to the brake levers. 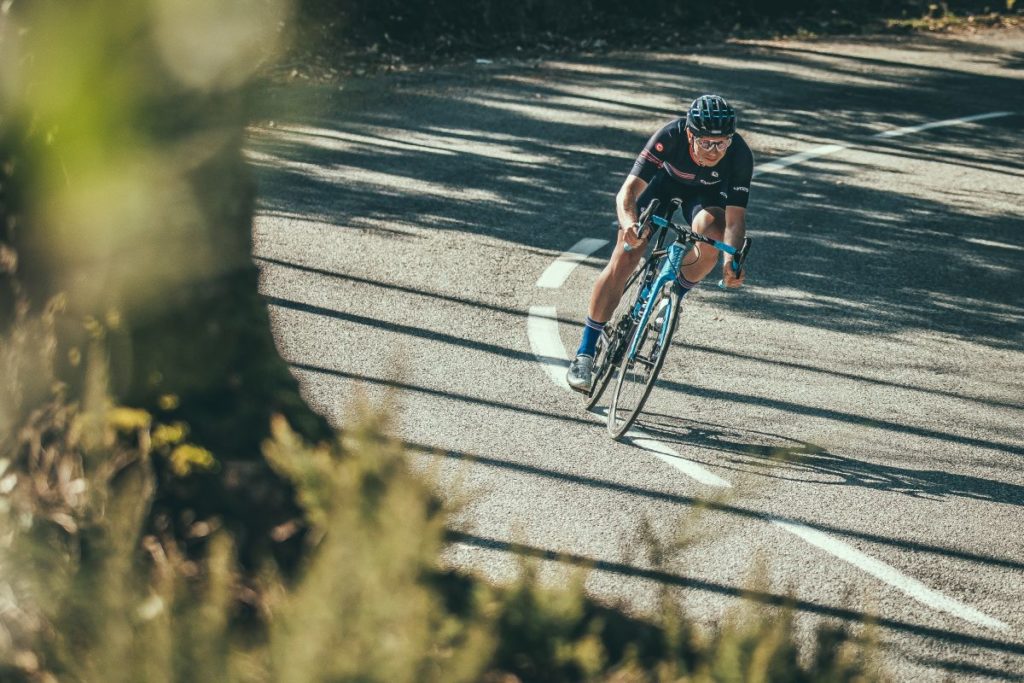 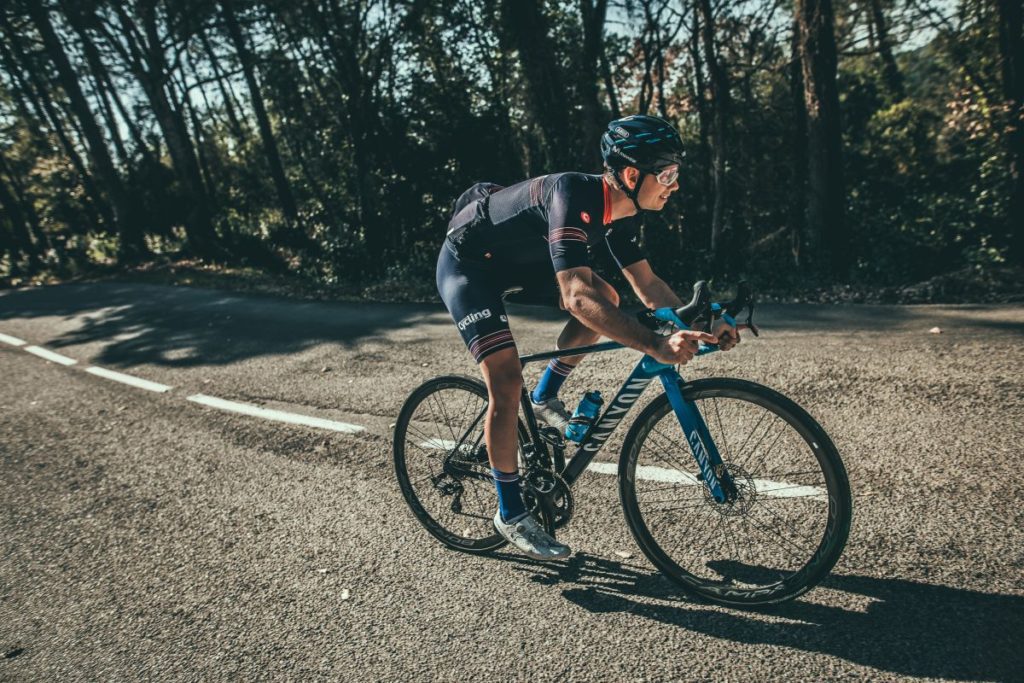 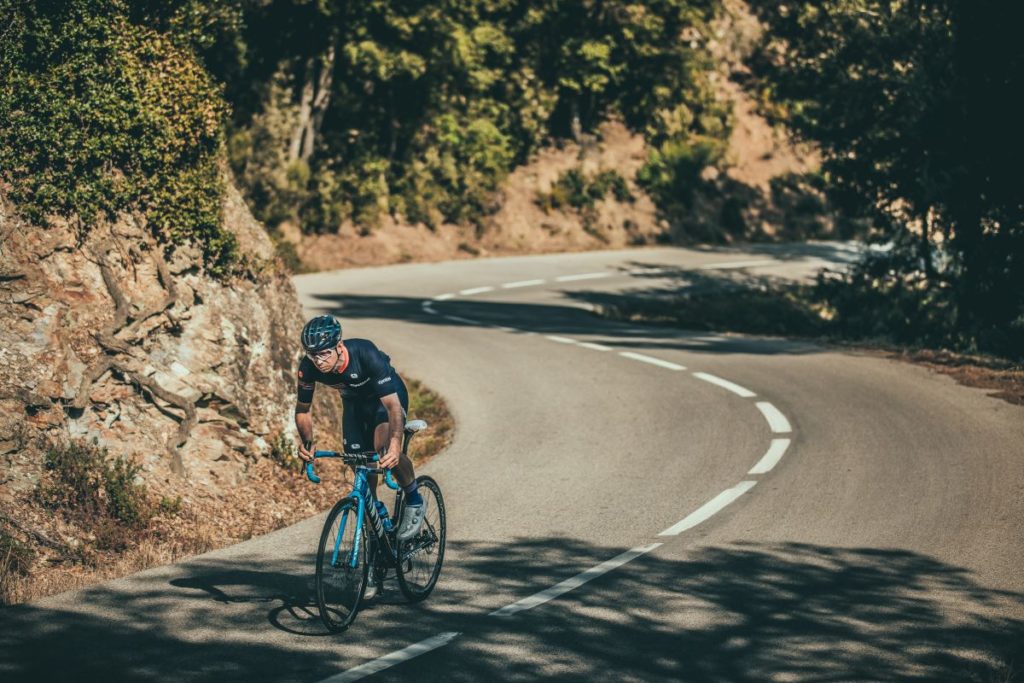 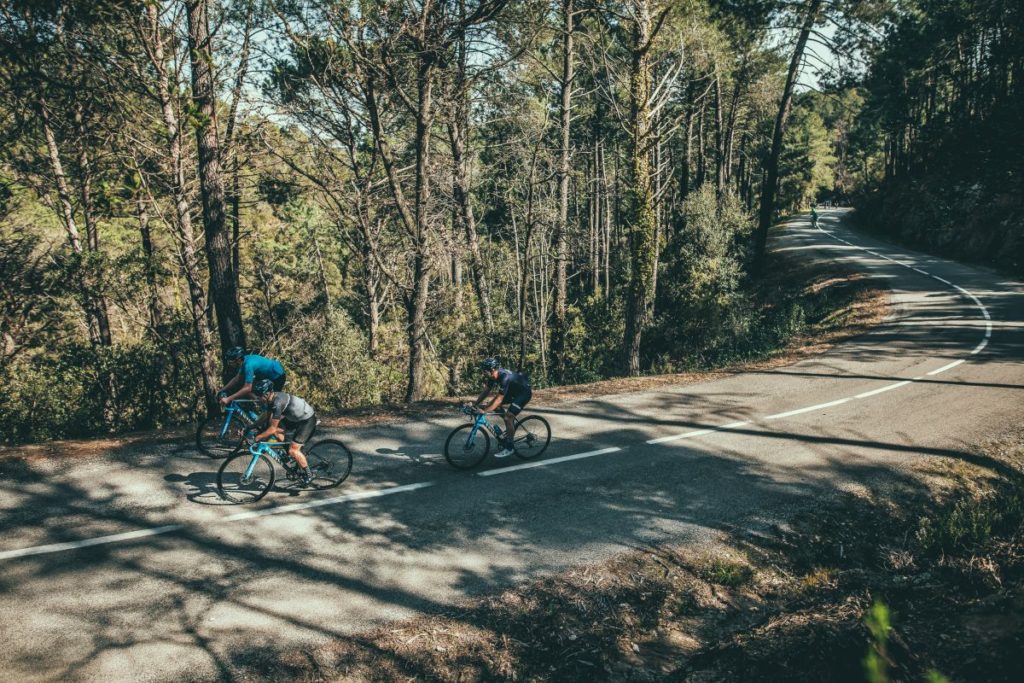 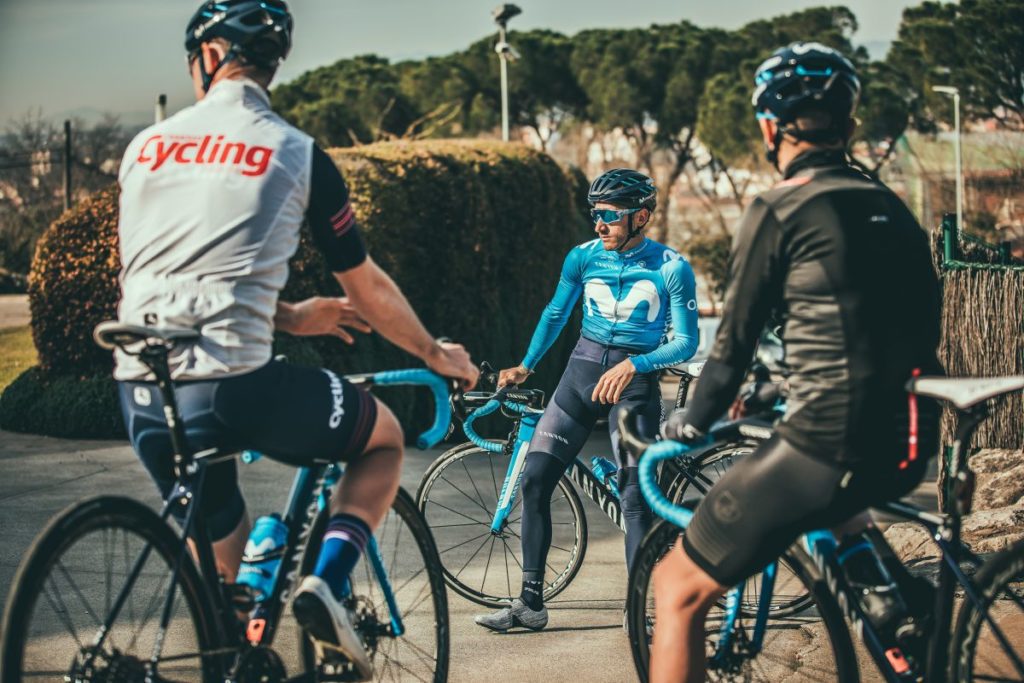 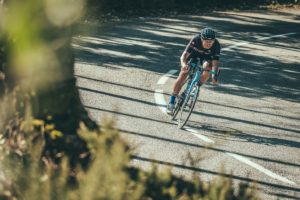 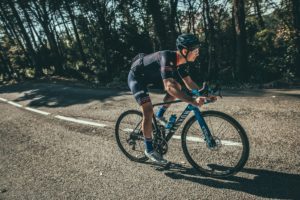 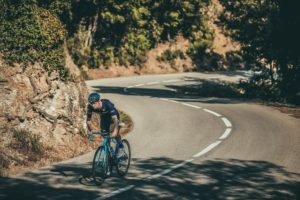 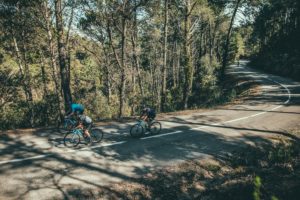 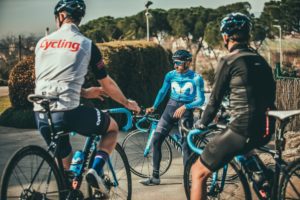 The bike had me feeling a little spoiled. The luxuries of riding a pro level build gave me the foolish belief I could keep up with someone who a few days later would finish 10th at Kuurne-Brussels-Kuurne.

Now with spring in the air, I need to get out and ride more so next time I last a fraction of a second longer on a pro’s wheel.