I’m in Moab, Utah on a rest day after seven days of hard riding. It is the longest stretch between rest days of the whole tour. A challenging one. We’ve ridden 856 km and climbed a total of 7389 m. We froze in the night and early mornings as temperatures dropped to as low as two degrees Celsius and baked by mid-day as the mercury climbed to the mid-thirties. My days began at five in the morning working in the dark to decamp and to be on the road by first light.

We started out in Jackson, Wyoming, rode into Utah, out of Utah into Colorado and back into Utah. We cycled down long, lonesome roads in the arid high desert. Stops to replenish water were few and far between. Three of the seven days were close to 150 km. Those also happened to be the days with the toughest climbs. Our camp sites were basic, sometimes only with pit toilets and no other facilities. In the thickness and hardness of the week lay a gleaming nugget of joy, in the act of the journeying, in the strength to push the pedals for kilometer after kilometer, and, most of all, in the immersion in the harsh, startling beauty of the world about us. 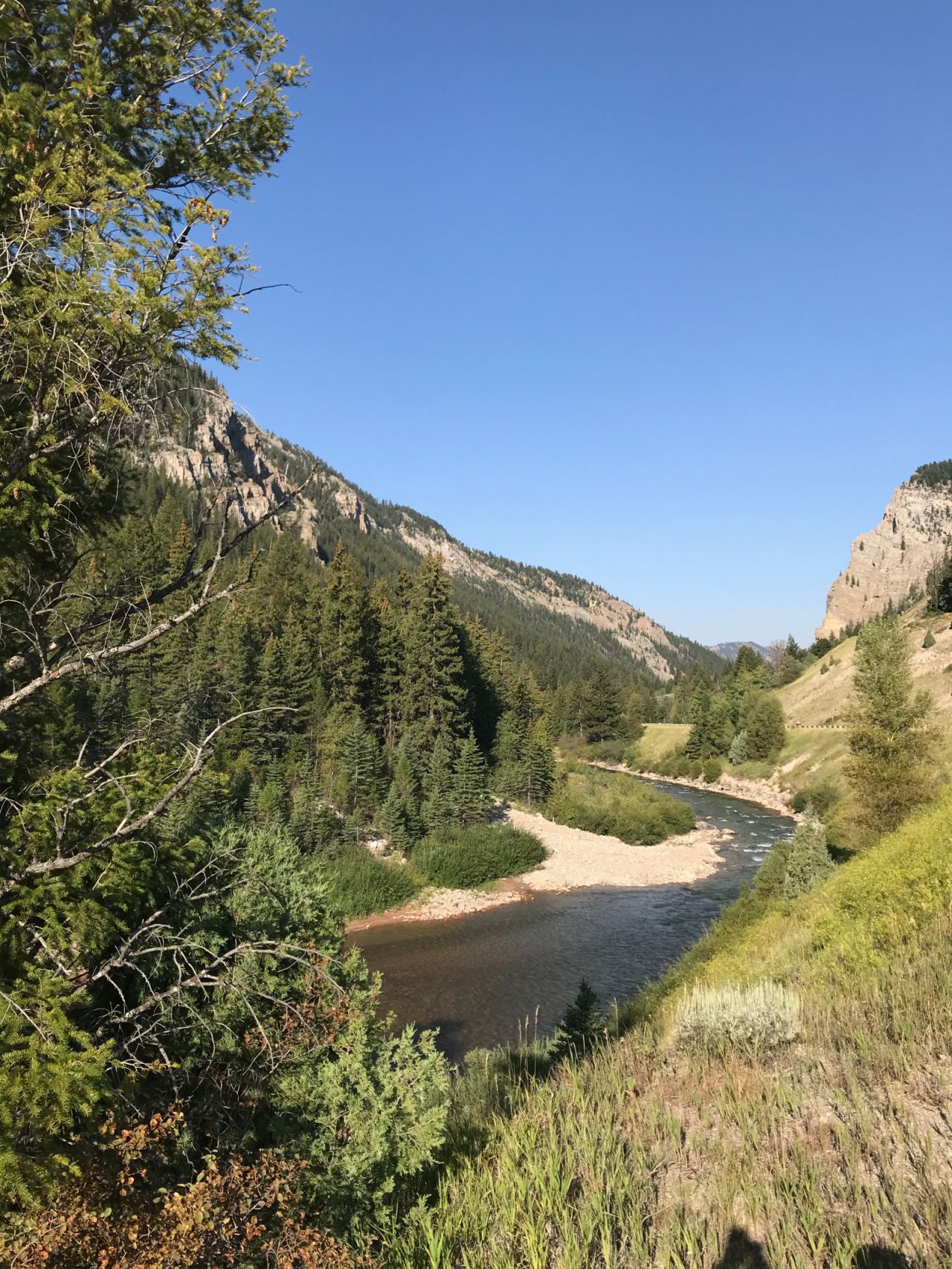 We ride out of Jackson on Route 191 along the Snake River through the rolling hills and forests of the Bridger Wilderness. Within a few hours we’re rolling into the high desert. 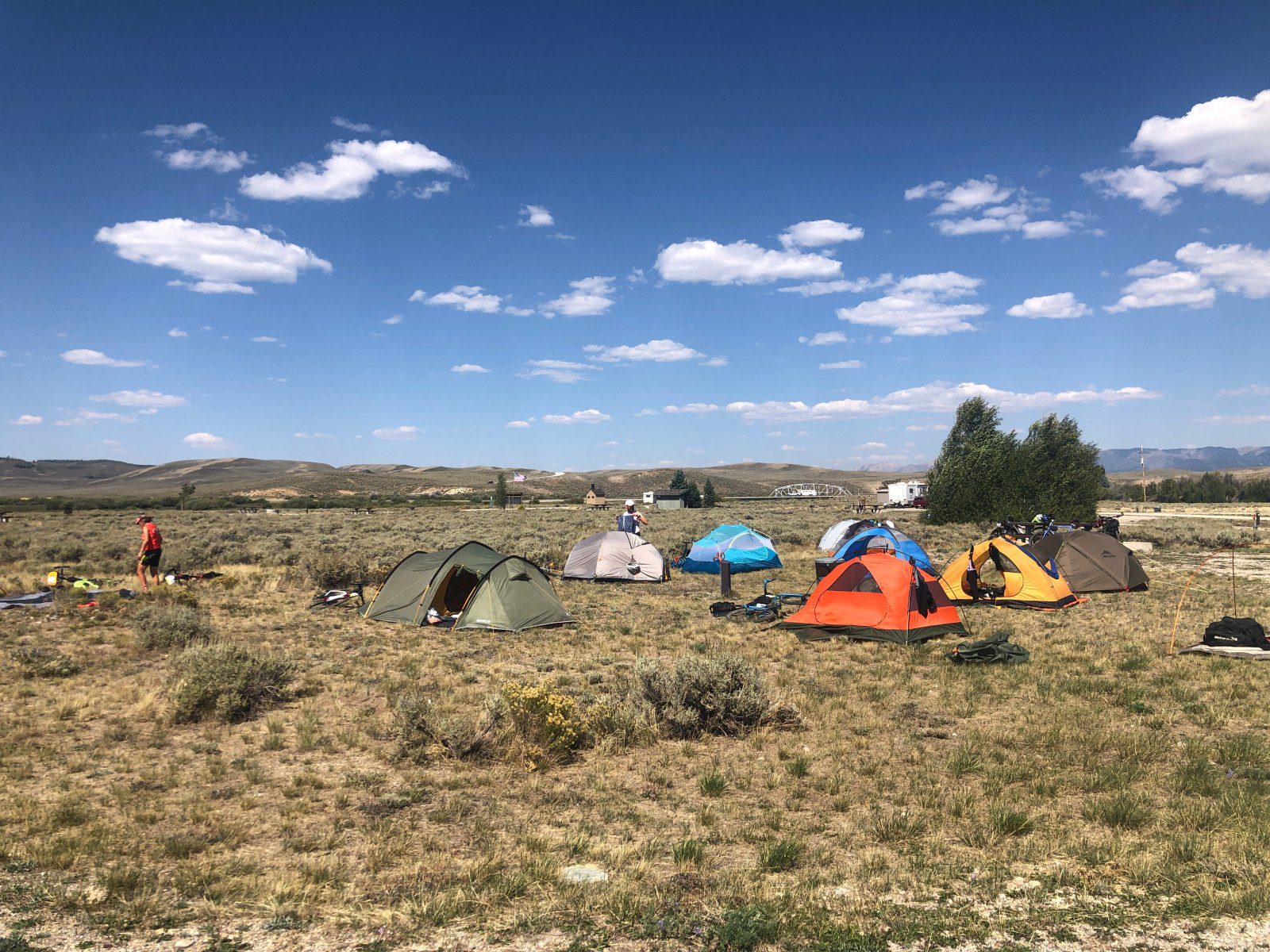 I’m at camp by noon after only four hours of riding. A very short day. We set up our tents among the sagebrush. There is no shelter from the sun which by now is blazing.  Luckily, the camp ground is adjacent to the Green River where I go to soak myself and my bike kit. 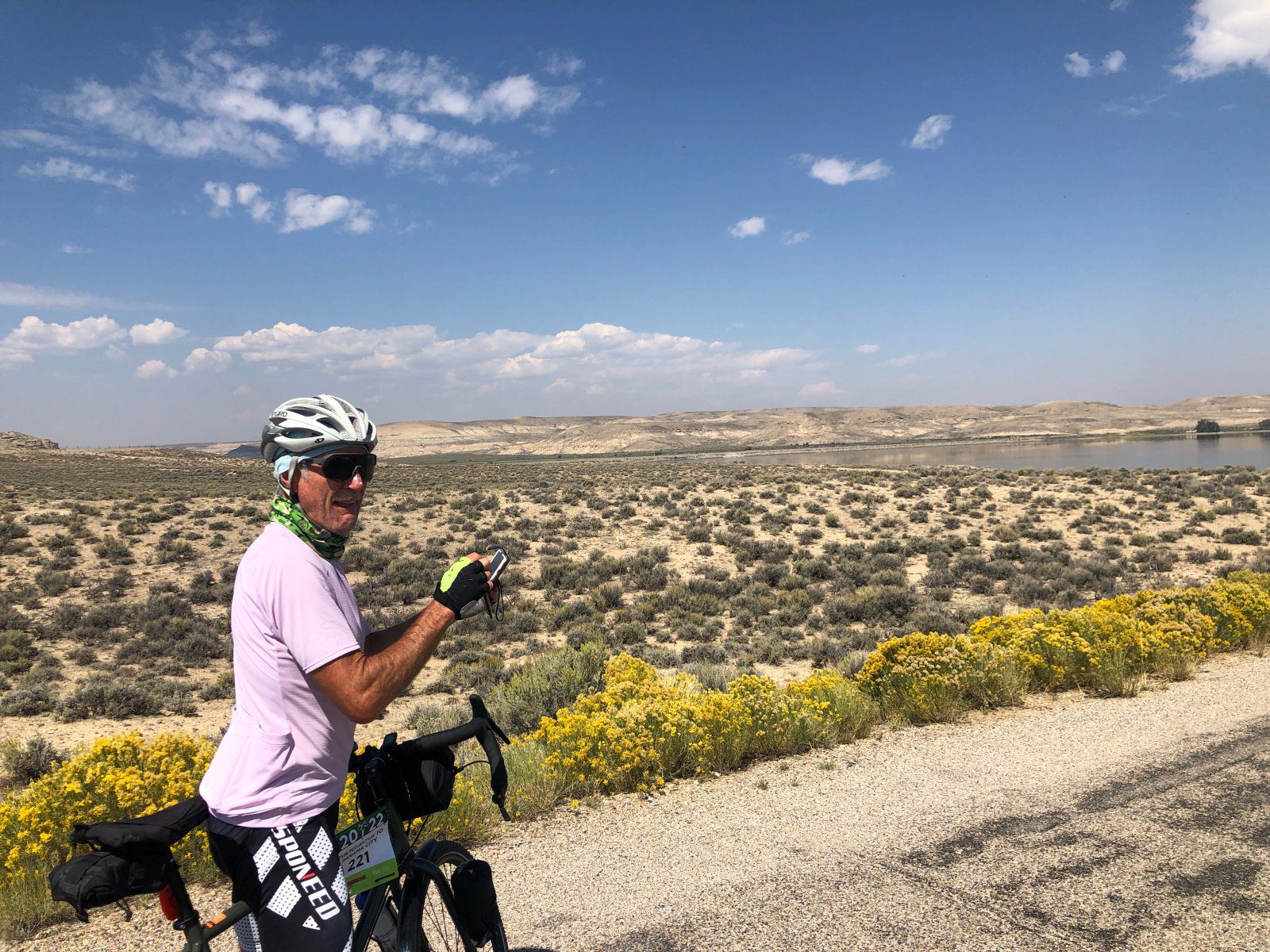 I team up with Charles. He emigrated to Canada about twenty years ago but retains traces of his South African accent. He took up cycling by happenstance. He was out walking in his neighbourhood and chanced upon an old Peugeot bike on a lawn with the sign, “Free”. He took it, had it fixed up and went on his first ride. 80 km. He was hooked.

We’re a good match in pace and attitude. It’s the first time I find myself really comfortable drafting. This is good because over the course of the next few days we have our fair share of head wind.

We’re on Route 189 traversing the high desert. In the distance we can see a series of low rising hills.  We stop for a cold drink at Obos Market in Marbleton, population 108. It is a surprisingly well stocked market.

I meet a young man standing outside by his souped up Dodge. He asks me where I’m headed. He can’t quite comprehend what I’m doing. I want to know where he’s from. He’s from that part of Wyoming but now lives in northern California among the redwoods. “I come back,” he says, “because I miss the wide open spaces here.” A moment later he roars off before I can ask his name. 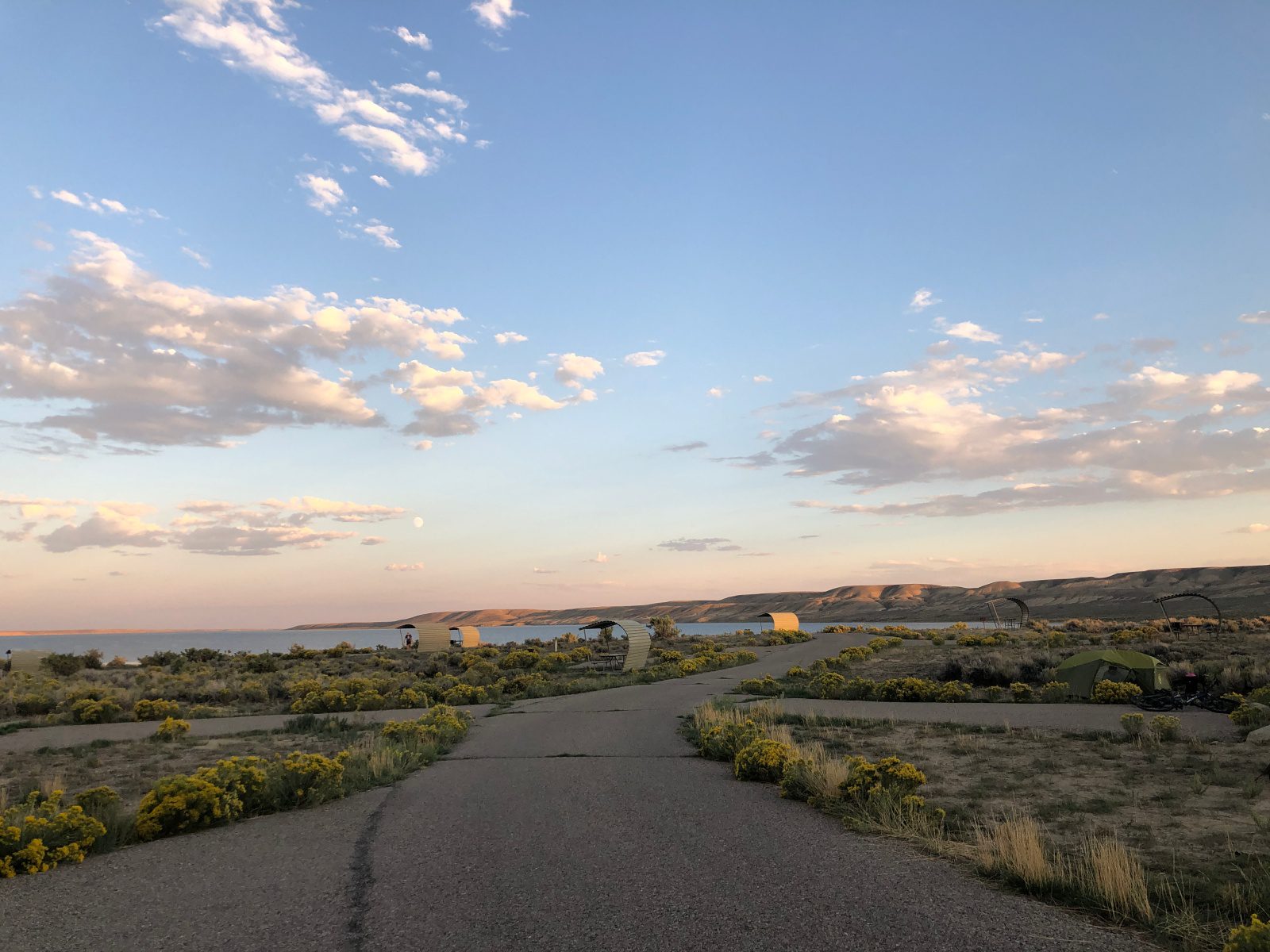 Our camp site at the reservoir is pretty but as bare and exposed as the previous day. I walk down to the boat ramp hoping for a swim. The water is dense with green algae. I make do by hosing myself down under a cold water tap. 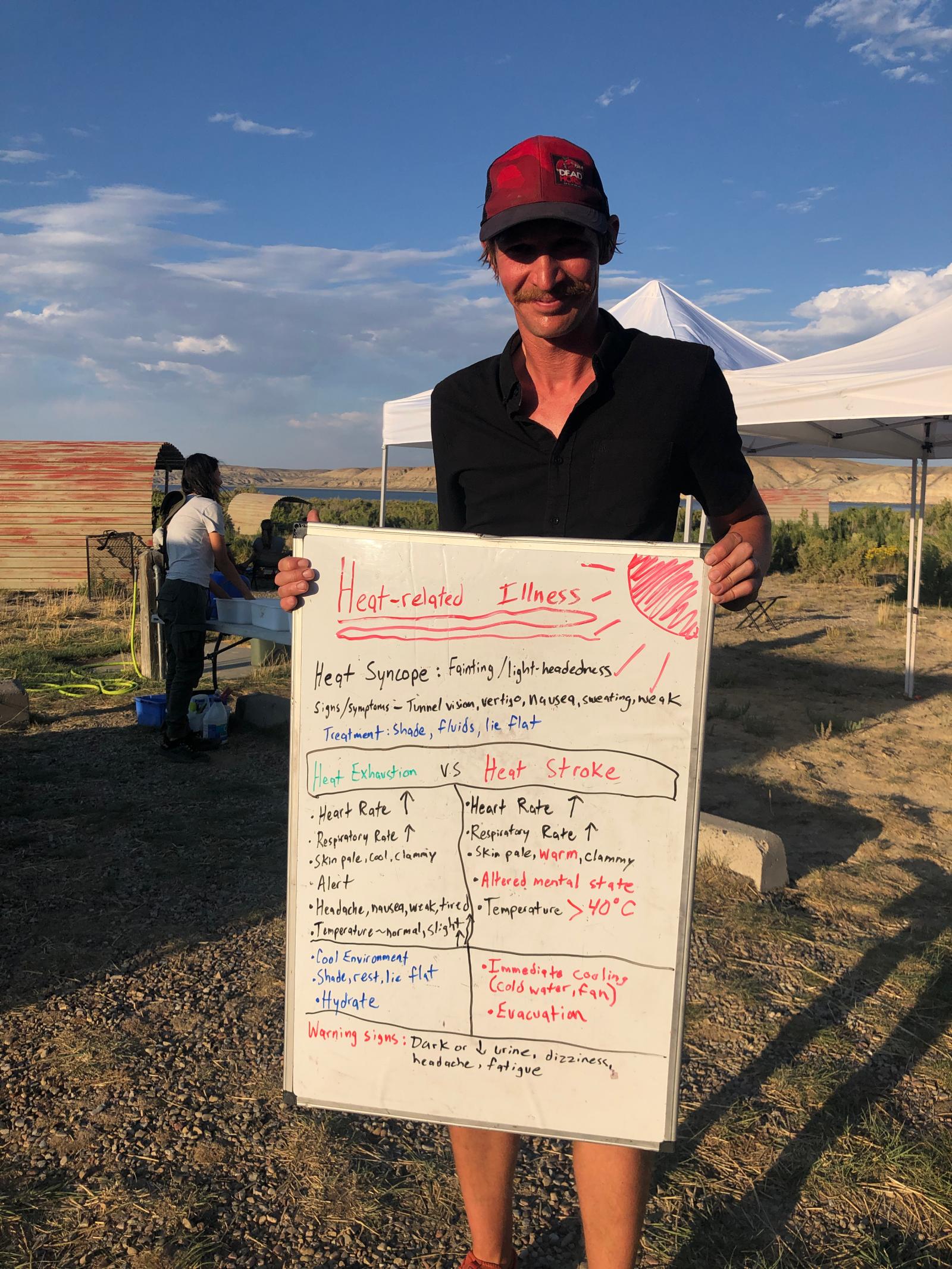 That evening, Chris, our medic, gives us a talk about heat exposure. We’re going into long days in the saddle riding into the hottest time of the day. He wants us to be aware of the warning signs of heat exhaustion/heat stroke and what to do about it. I shiver at the thought of what heat can do to us. 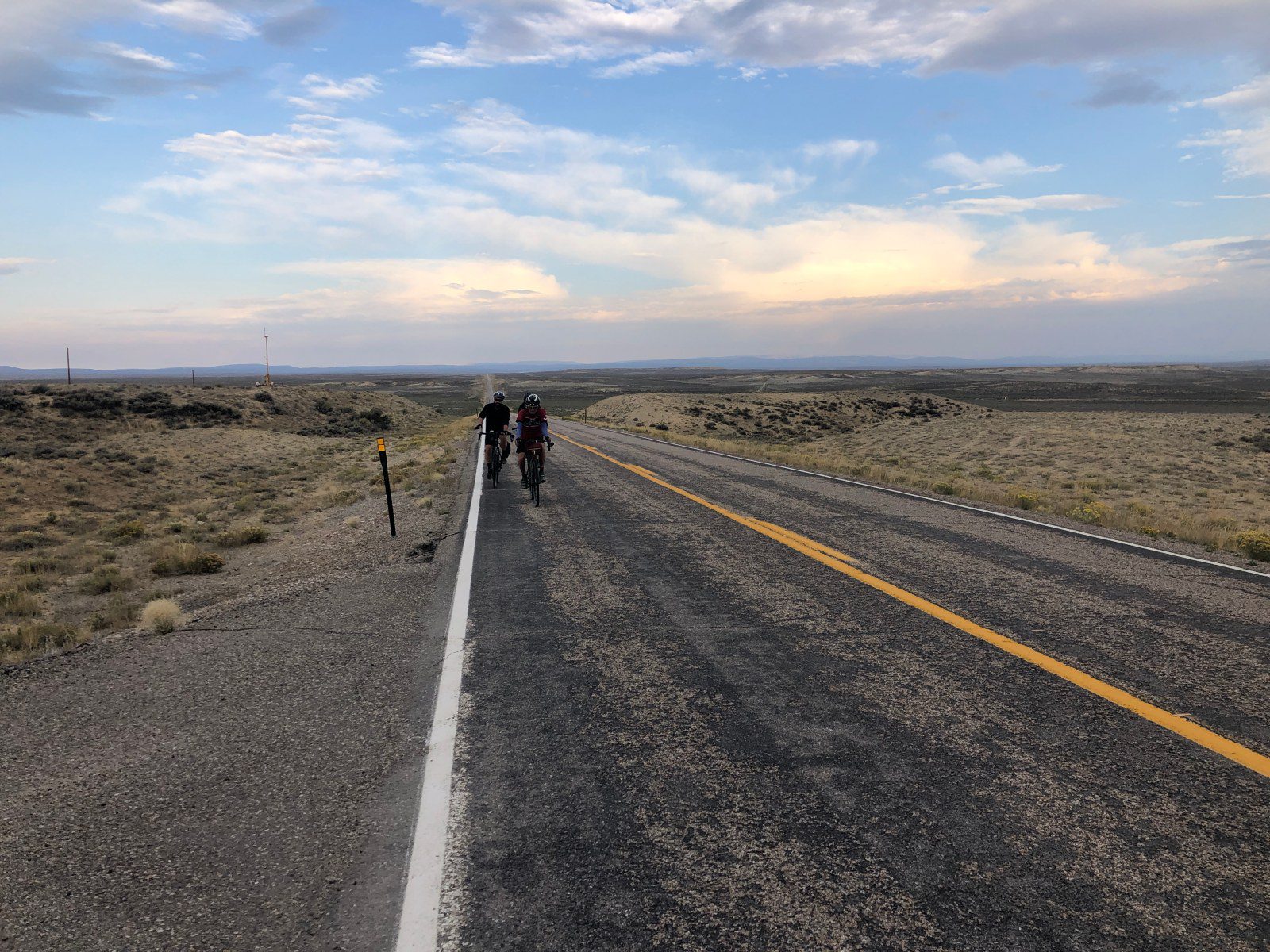 We’re back on the road through the barren lands of Lincoln County, Wyoming. It’s going to be a long day and we have to pace ourselves. Our tendency is to want to push and be faster. Charles and I keep reminding each other to hold back. 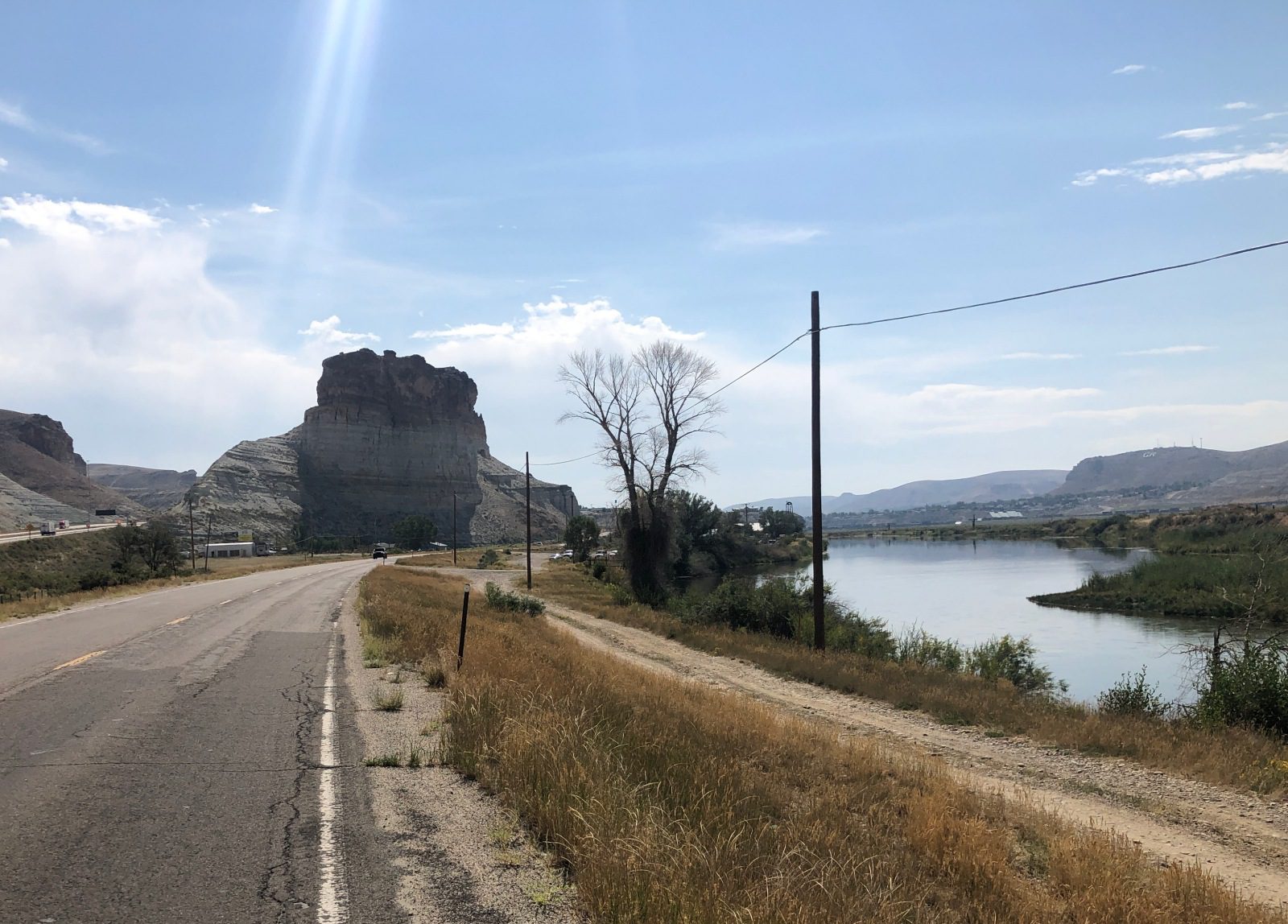 We’re approaching the city of Green River. It’s 103 km into our day and the first place we can replenish our water supply. Fantastic Sphinx-like rocks loom ahead. What riddles do they pose for us? 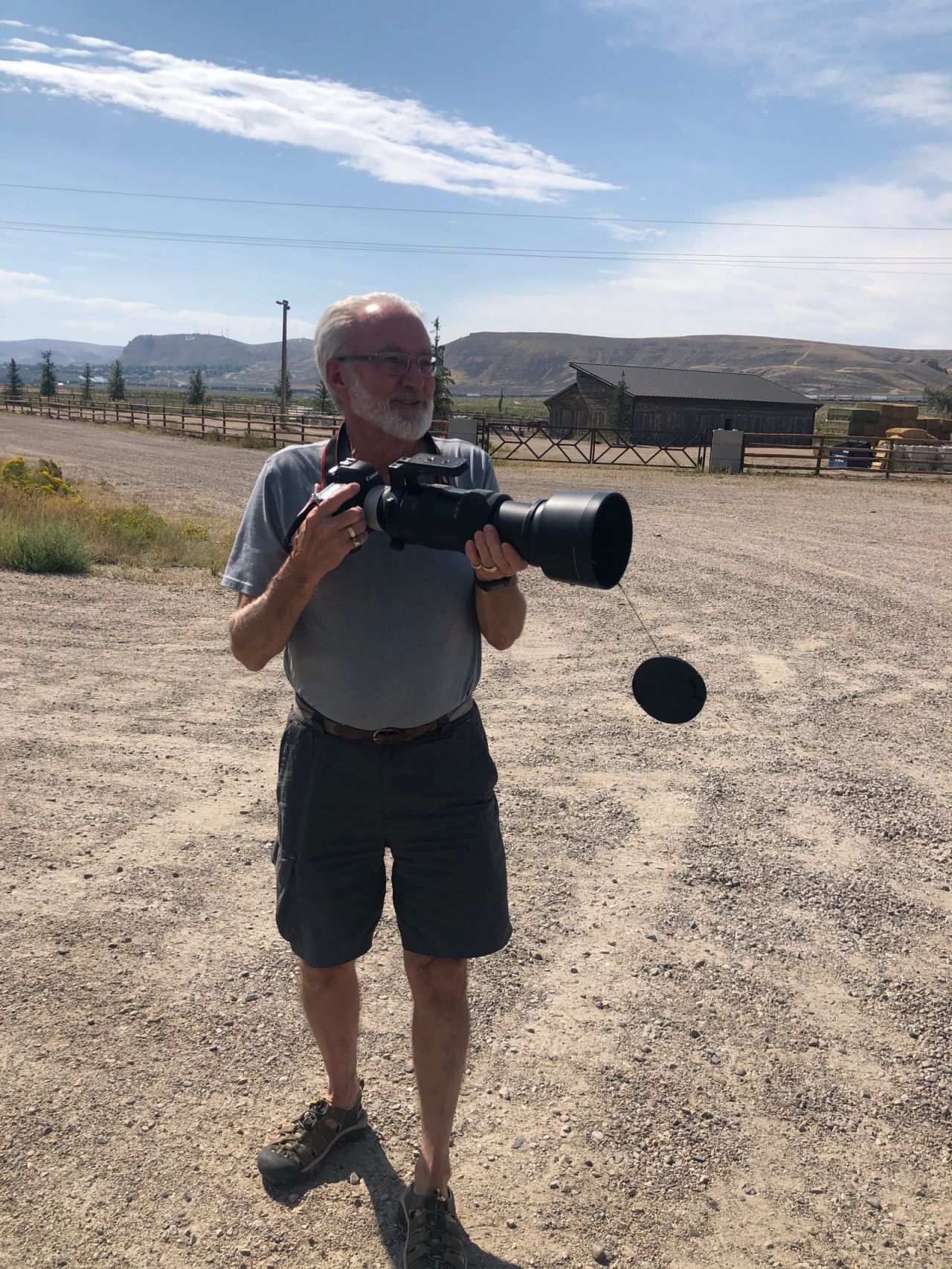 On the outskirts of town a jeep pulls up in front of us. A man jumps out lugging a massive camera. “I’ve been chasing you,” he says. He to take our picture. Howard is a retired pharmacist. Photography became his passion after his wife was diagnosed with Alzheimer. She’s been in a home for six years. When Howard talks of her, his eyes well up. 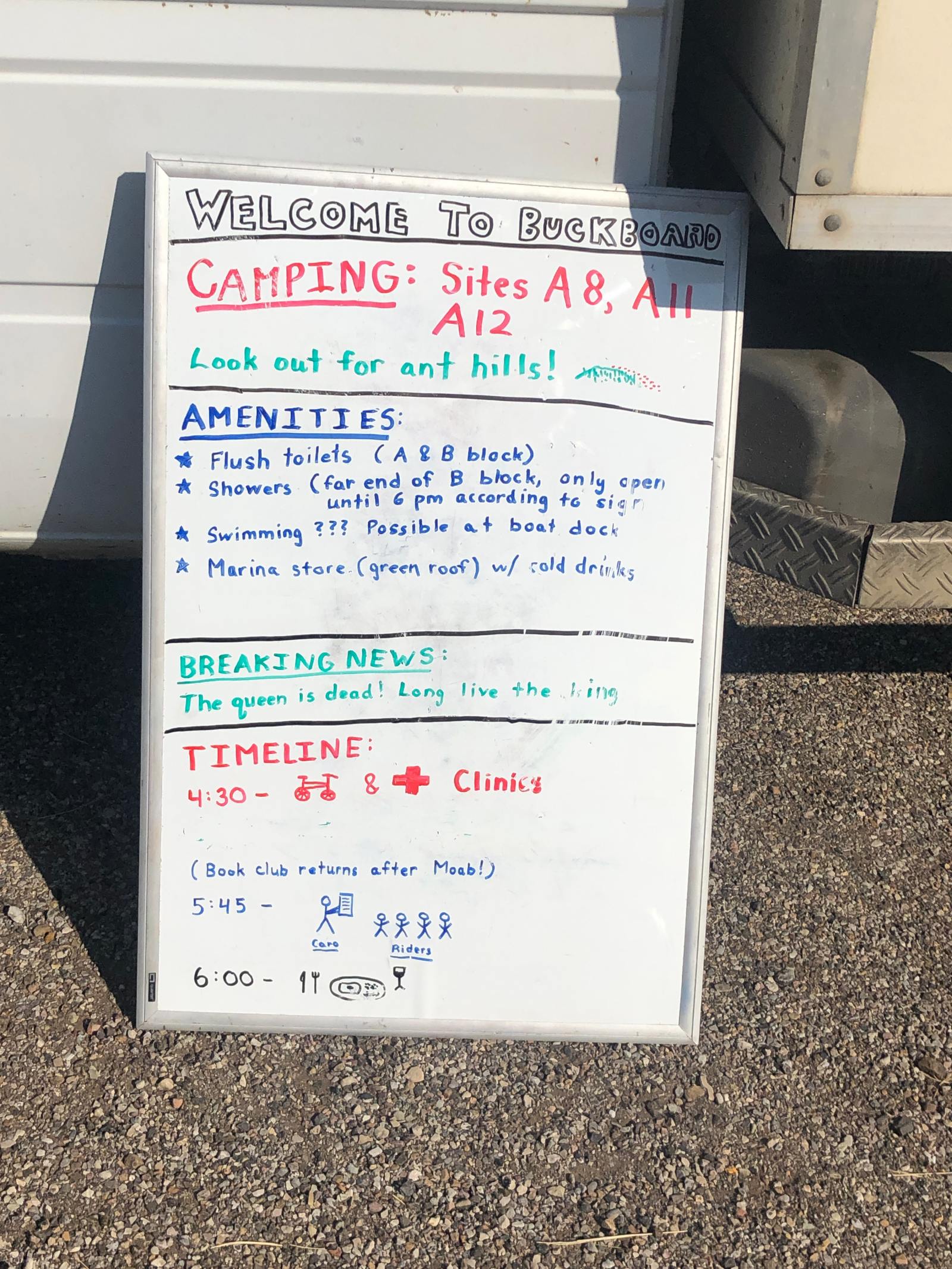 On the road, we’re in a bubble. Our world is tarmac and sky, sagebrush and mountains, pedal strokes and handlebar grips.  I ride with Charles, but we don’t talk much. There isn’t any need for words. Occasionally, we point out a feature of the landscape that strikes us. We are in a world that is both immediate and physical and interior. Much of the time, we have no access to cell or internet service. We consider it a blessing. When we arrive at camp we see the news scrawled on the whiteboard. The Queen is dead. The outside world makes its brief impression. 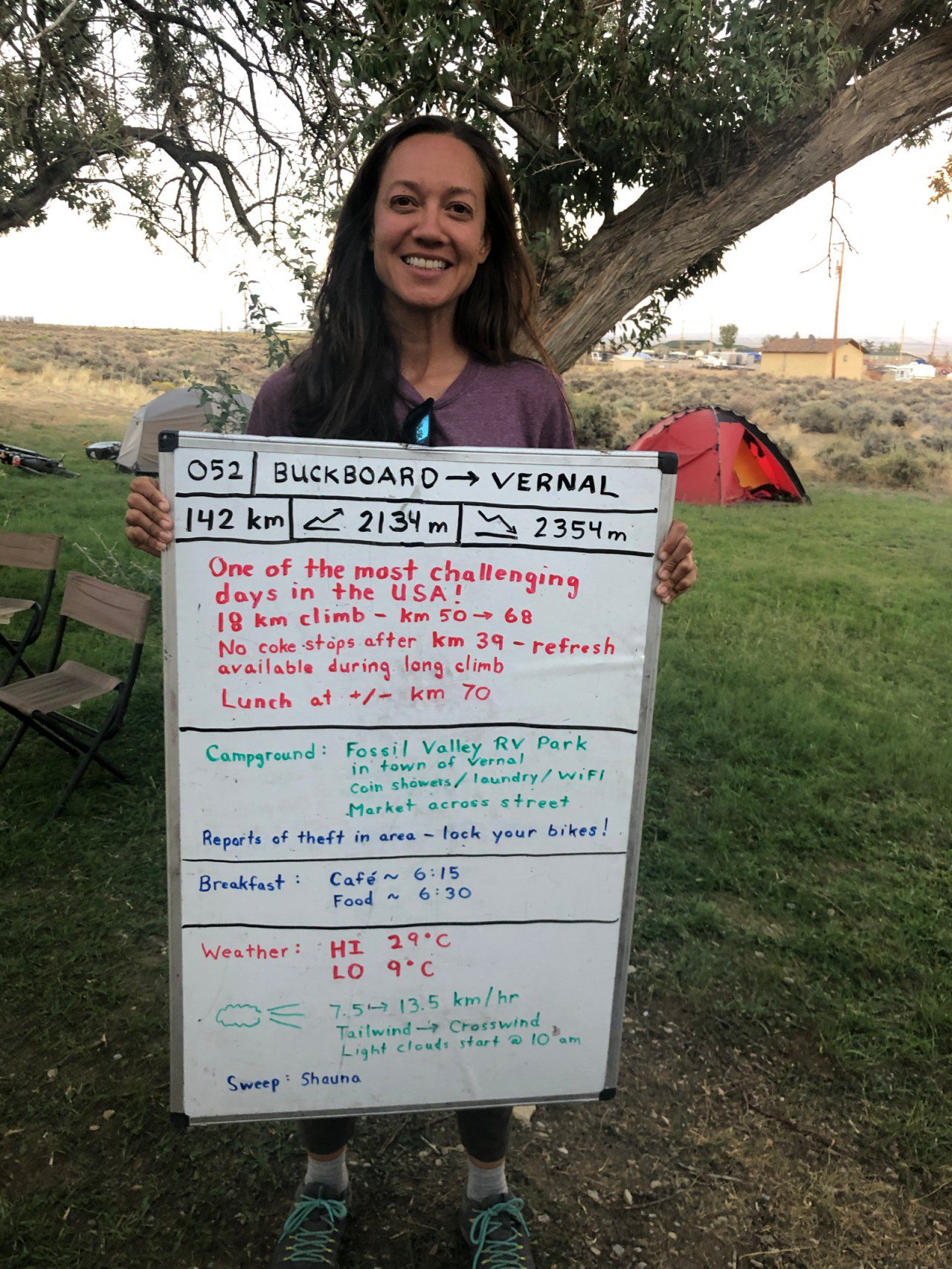 At our rider meeting tour leader Carolina happily chirps that we’re about to face our hardest ride day in the States. We haven’t recovered from our previous day.

This is what our Ride With GPS profile looks like: an 18 km climb starting at 50km. What Carolina hasn’t mentioned are all the tough climbs that follow. 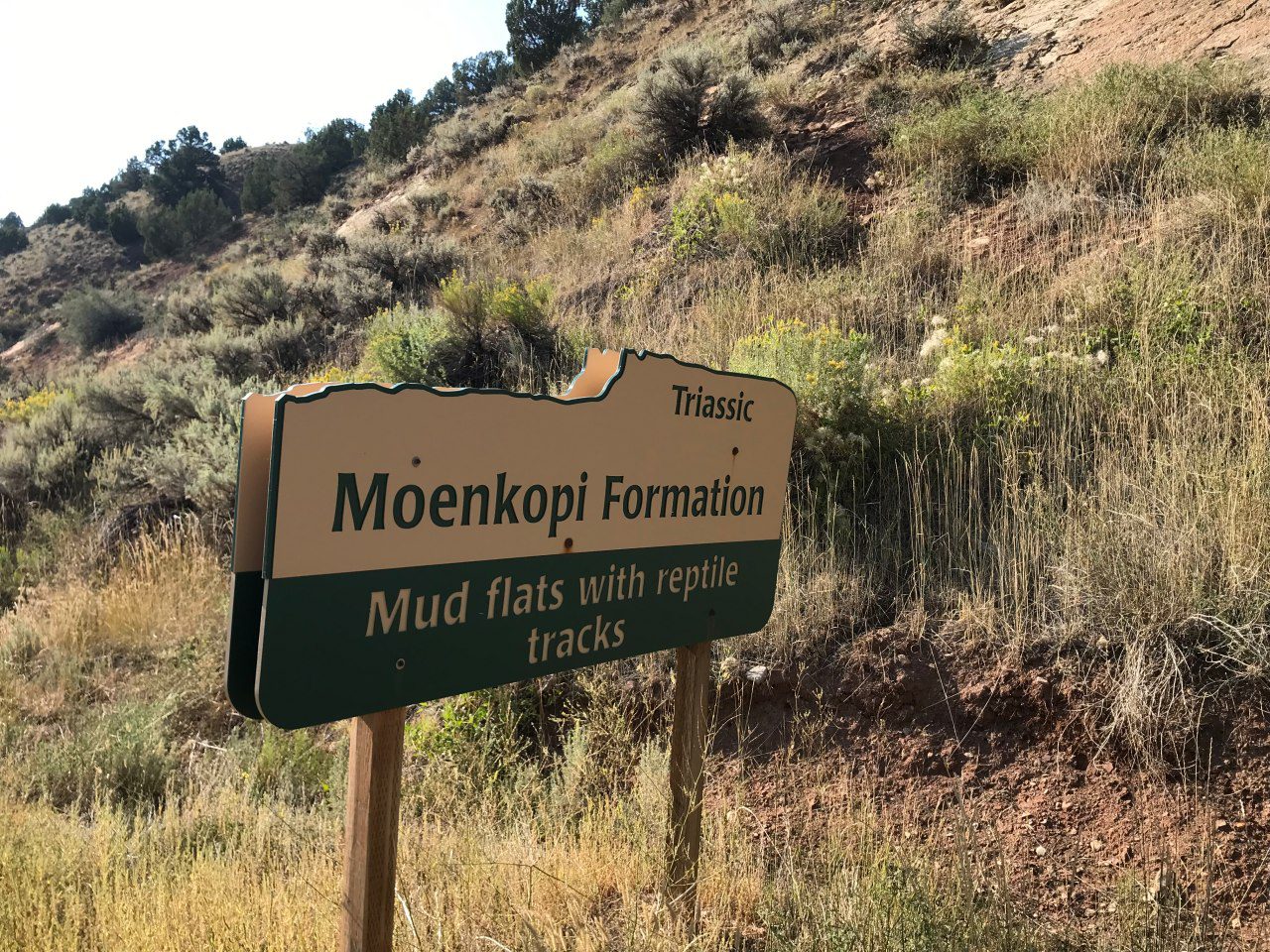 We are cycling through Flaming Gorge, named for the spectacular red sandstone cliffs. All along the route we read information posts detailing the ancient history of the landscape. We are riding into the deep past. 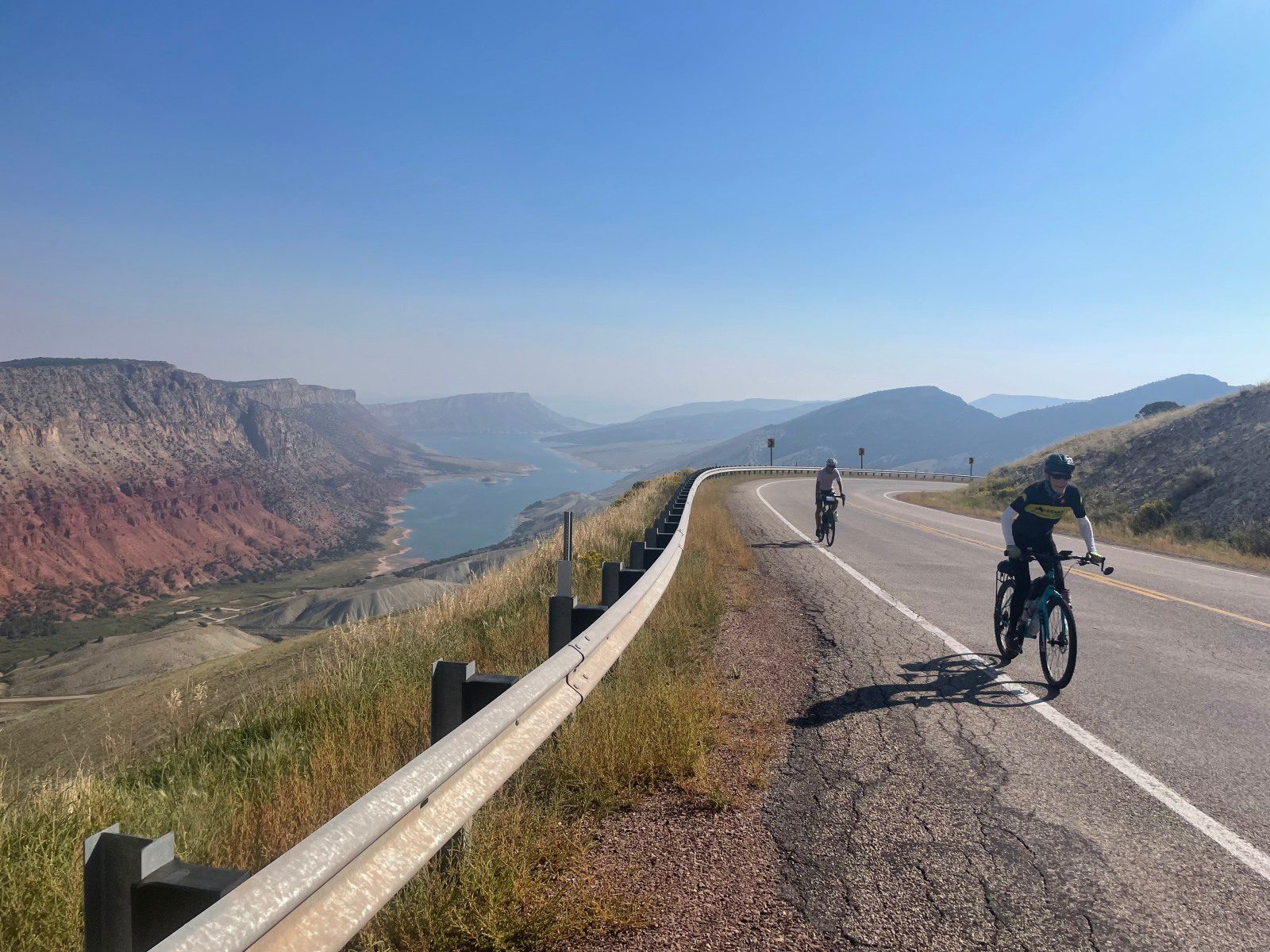 The big climb is long and arduous, particularly the last section when the gradient rises to 10 percent. “Steady Eddy,” Charles calls out to me. I stand on the pedals to inch my way up the mountain. When we think we’re over the top we face more climbs, more steep gradients and our legs are weary. Nothing for it but to push on. 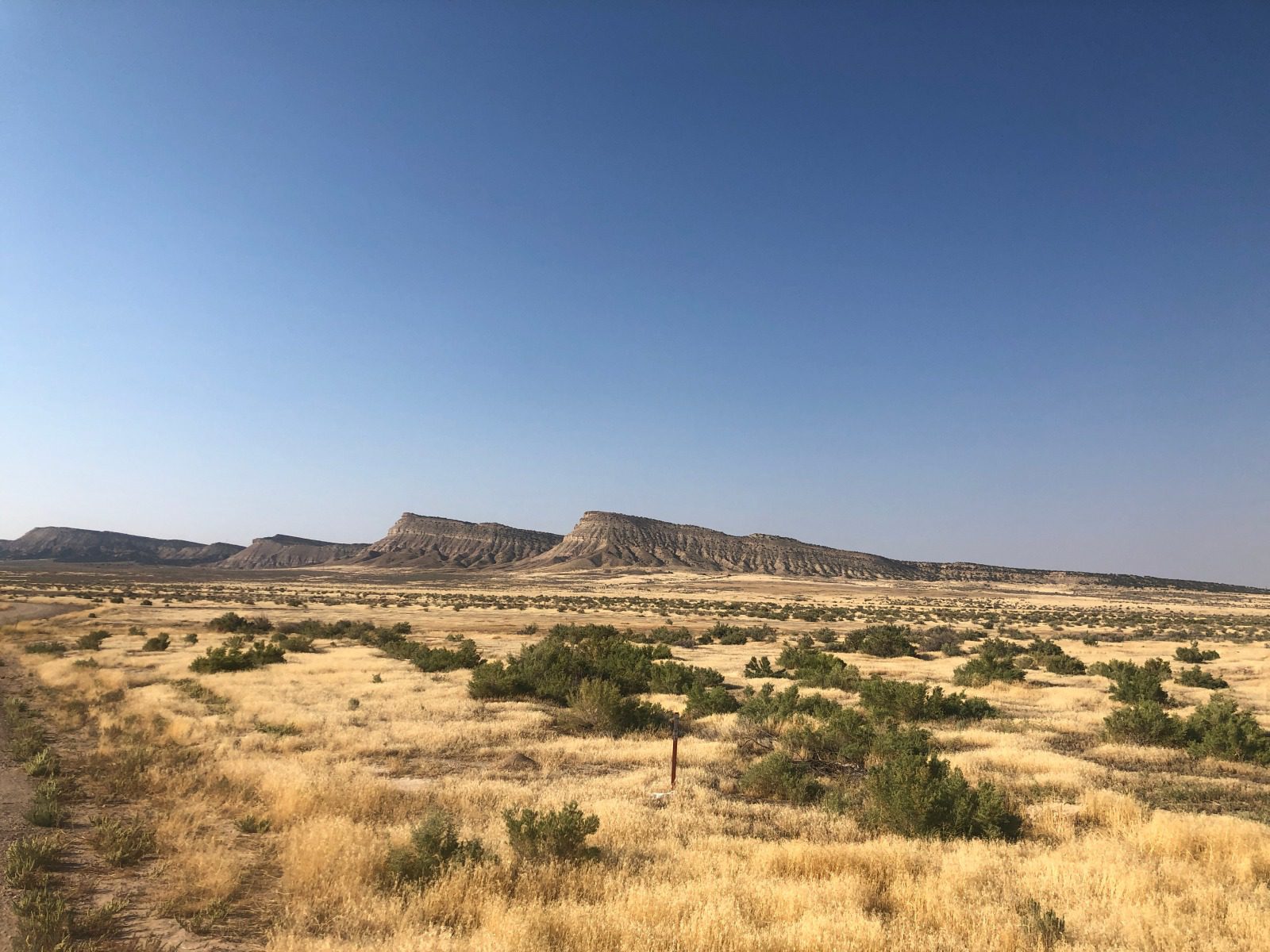 This is almost a rest day for us. We’ll be in camp by noon. The desert landscape is punctuated by low rising hills. We cross into Colorado; we are also entering dinosaur country. Our route is the Dinosaur Diamond highway. Wide swathes of this land were once the stomping ground of those ferocious and ceaselessly fascinating creatures. We are following in the footsteps of giants. As the sun rises and the heat ramps up to unprecedented levels I can only wonder if we are following them in more ways than one. 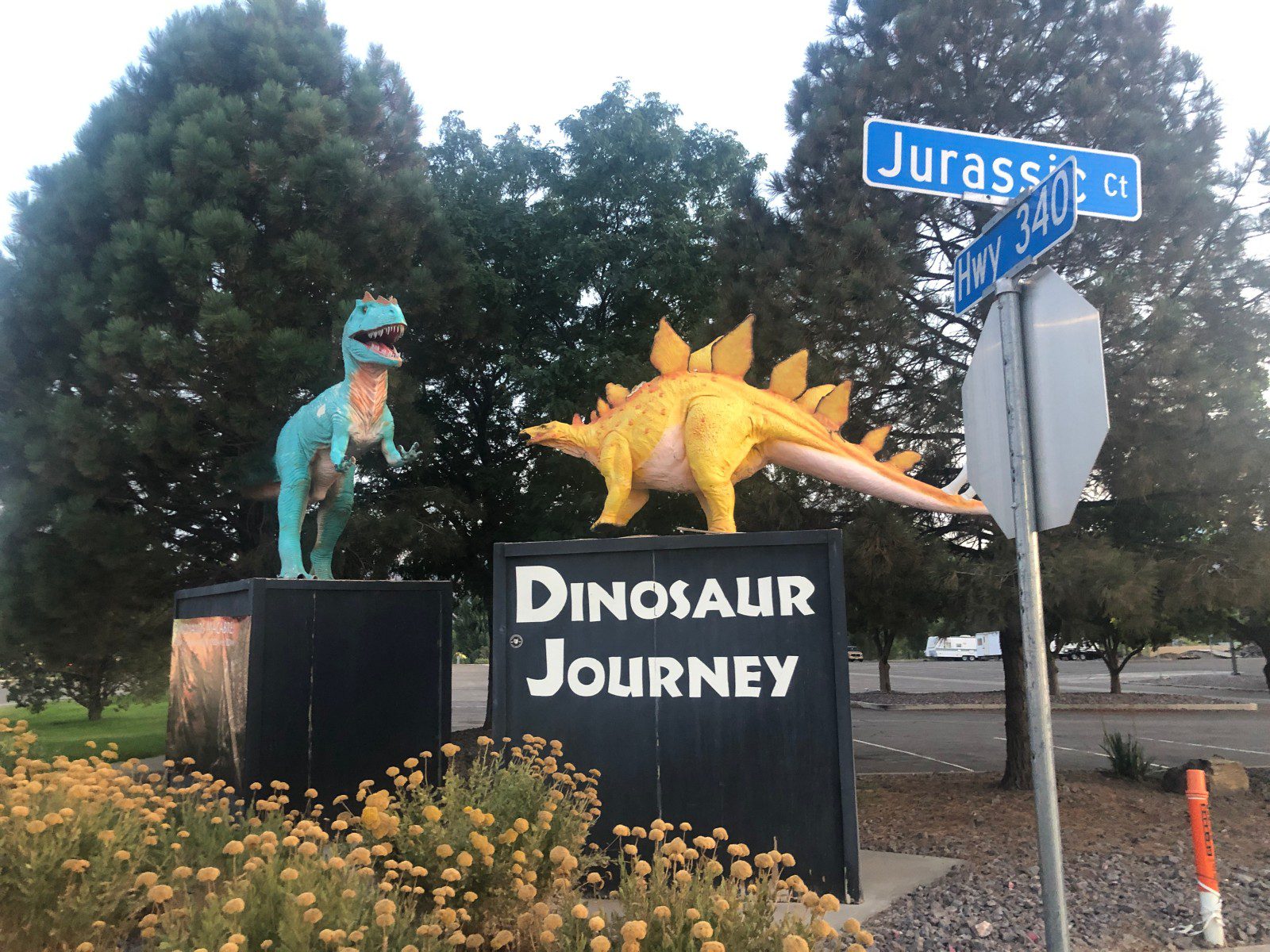 Dinosaurs are everywhere. We stop for lunch at a town called Dinosaur. Tyrannosaurus statues, brontosaurus figurines, inflated stegosauruses greet us in small communities and on garden lawns. 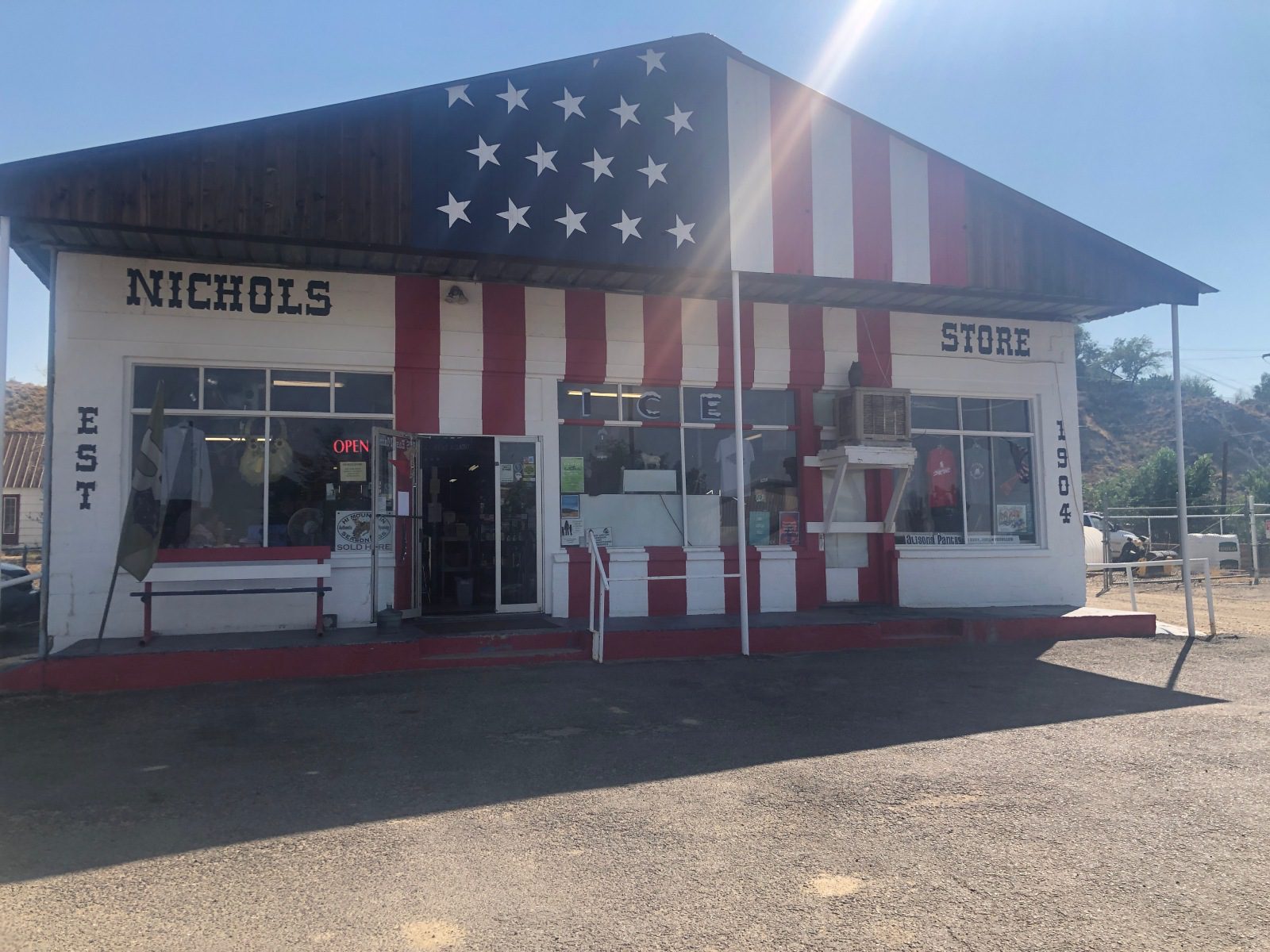 We reach our destination, the municipal camp site. The main street of Rangely, the highway that runs through the town, is lined with American flags. I take a walk to Nichols, a general store, which services the local ranchers. I speak to the two women who are at the cash register. Both are from Oklahoma. One has come up with her husband who works seasonally on the pipe line. The other married a Rangely ranch hand. She misses Oklahoma. Her father recently had a stroke and is in a home. She wishes she could be by his side. 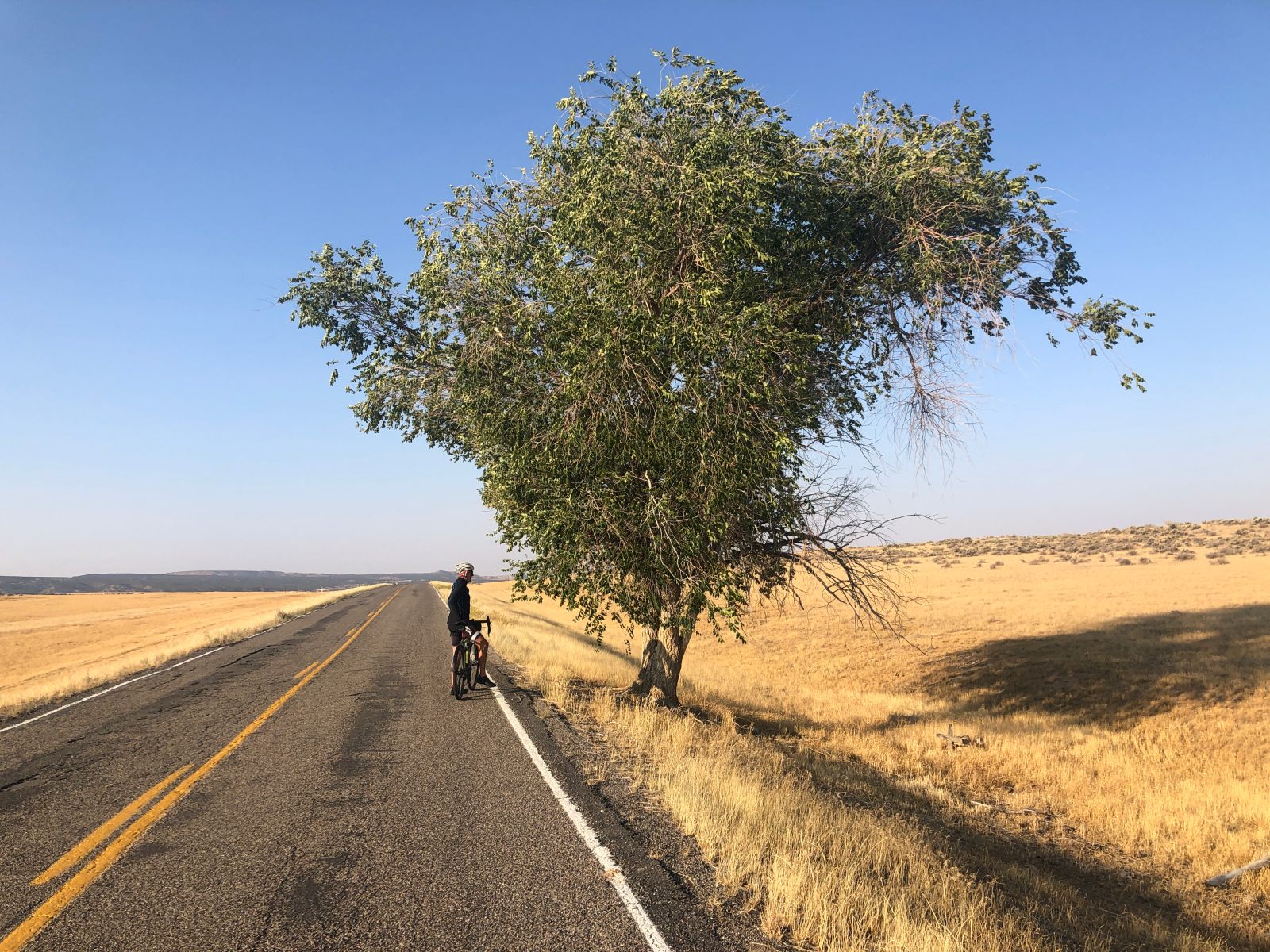 We’re back on the endless road through the barren, open range landscapes. It’s freezing cold as we set off at first light. It’ll be at least an hour before my fingers thaw. Here and there a pinyon tree has defied the odds to dig deep roots and thrust its foliage skywards. 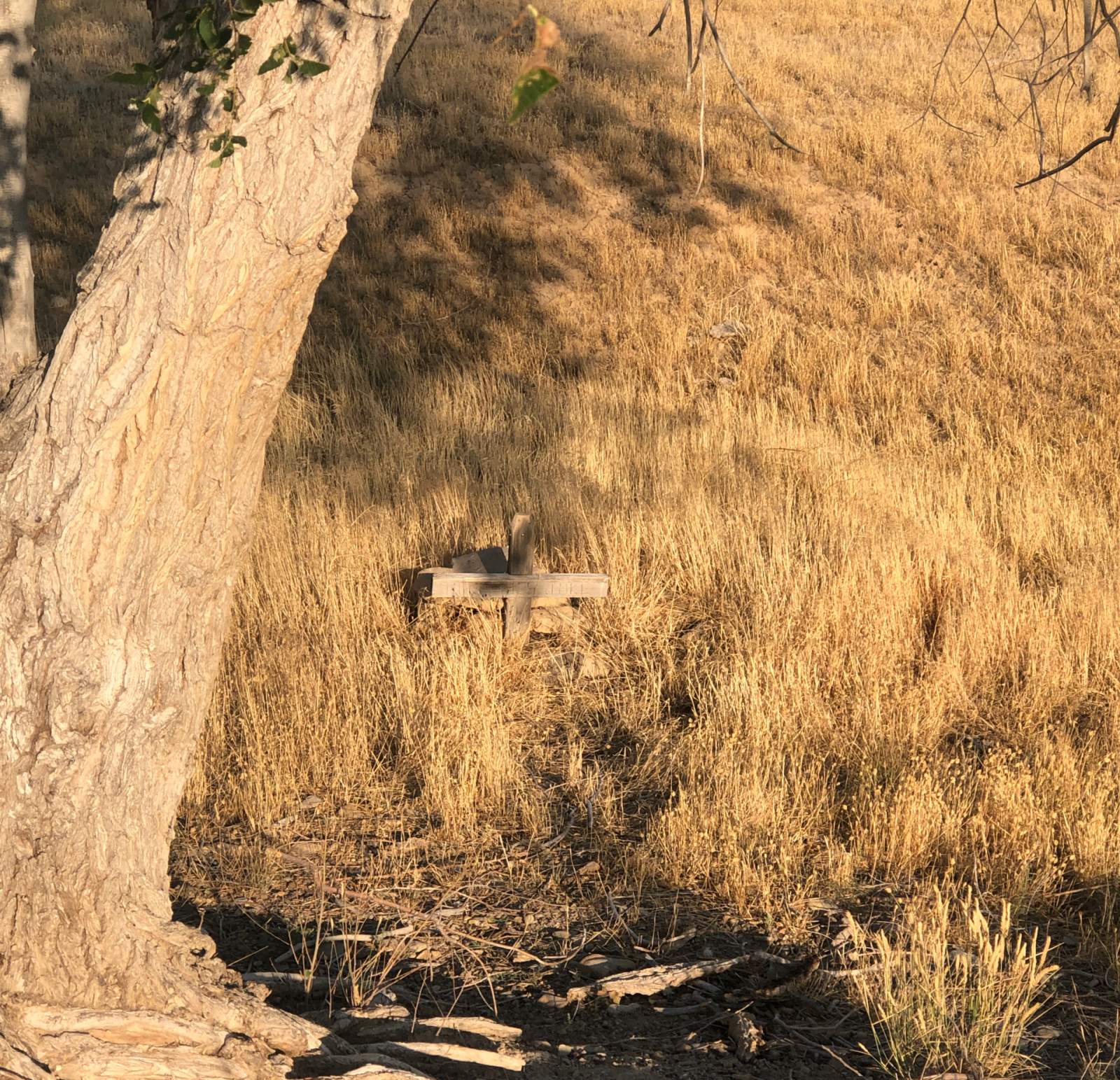 Obscured by one such tree lies a faded wooden cross. Years ago I had an album of cowboy songs. Cisco Houston sang The Dying Cowboy. “Bury me not on the lone prairie,” pleads the cowboy. Who died on this stretch of road and how? There is something sobering and intense about the sight magnified by the solitude around us. 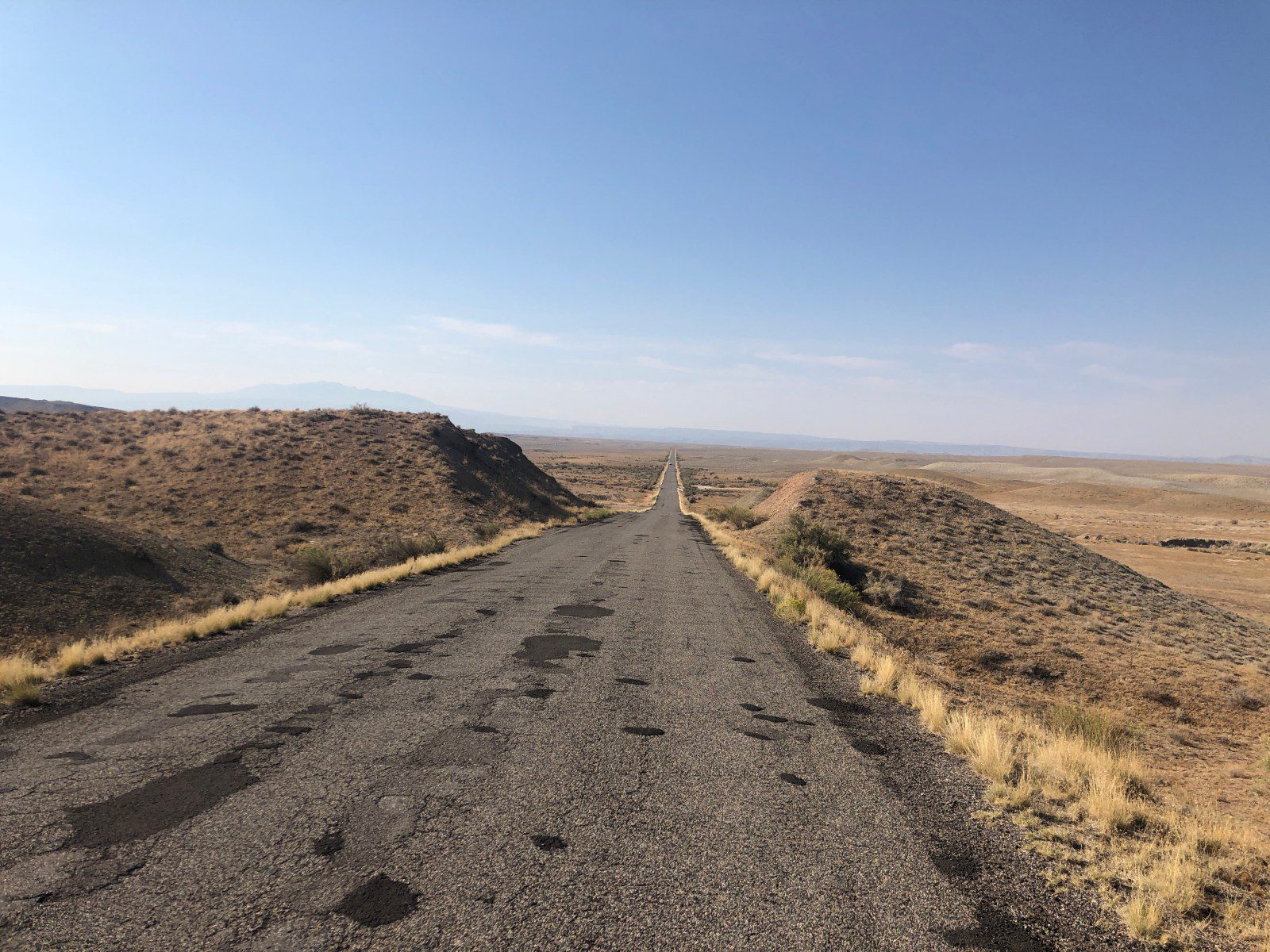 I had expected to make good time on a road that seemed to stretch in a straight line to eternity. I knew there was a climb towards the end of the day. But I didn’t think much of it. Mistake. The Douglas Pass rises to 2500 m in the Book Cliffs of Colorado. The switchbacks are sharp and steep. The wind has picked up gusting headlong into our faces. At one point I lose heart and consider walking some of it. Charles repeats his mantra, “Steady, Eddy”. I stand up on the pedals and push myself up the last and steepest two kilometers. 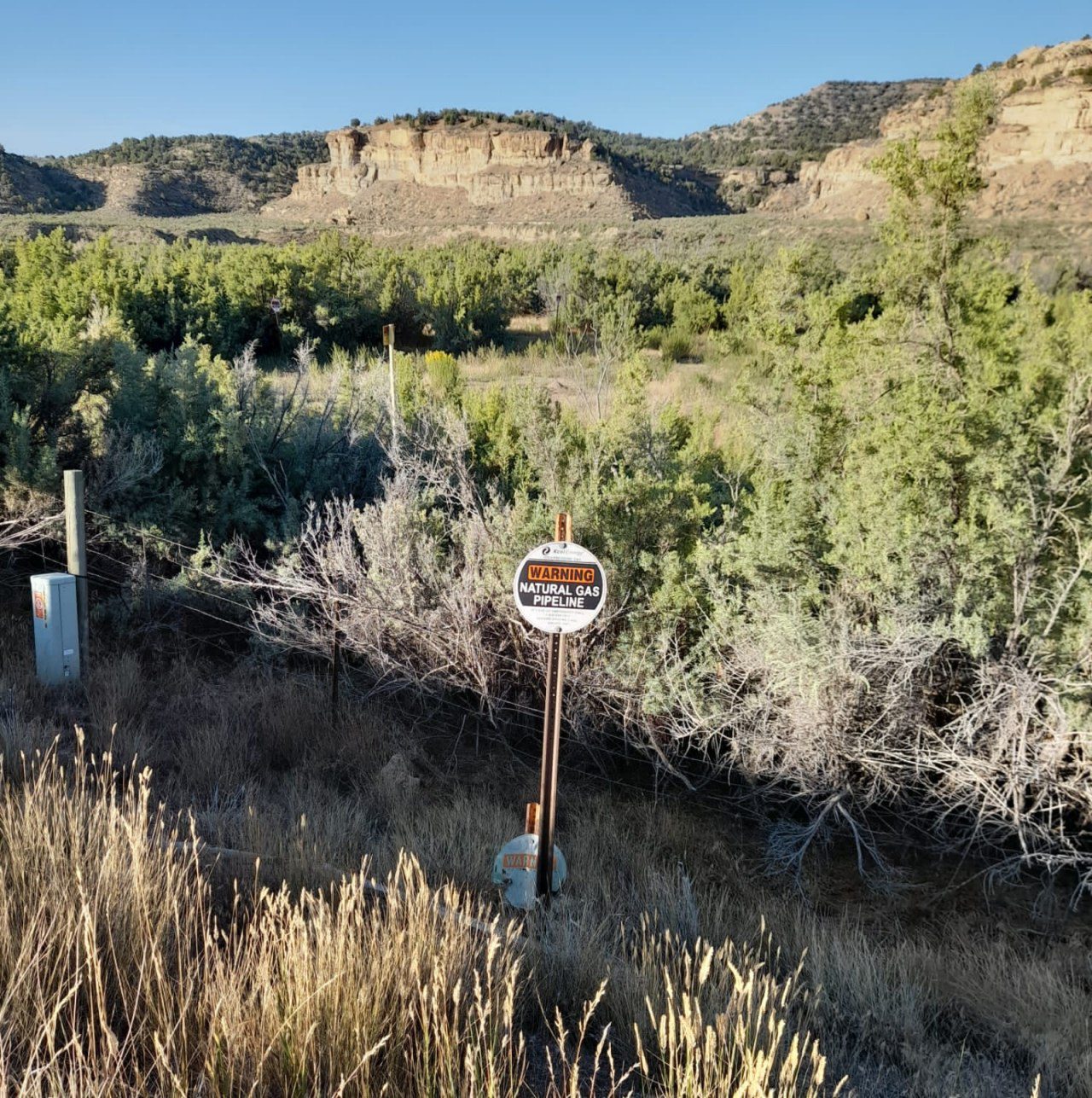 We have ridden through the remains of the Triassic and  Jurassic eras in landscapes that hardly seemed touched by time. It is with a jolt that I see indications of industrial activity. All along our route are signs of the pipelines that drive our modern world. I think of the intense protests against Keystone. I also think of the political turmoil in Europe and the unknown consequences of any Russian decision to slow or shut off the gas supply to the west. Dinosaur tracks and oil and gas deposits sit side by side. 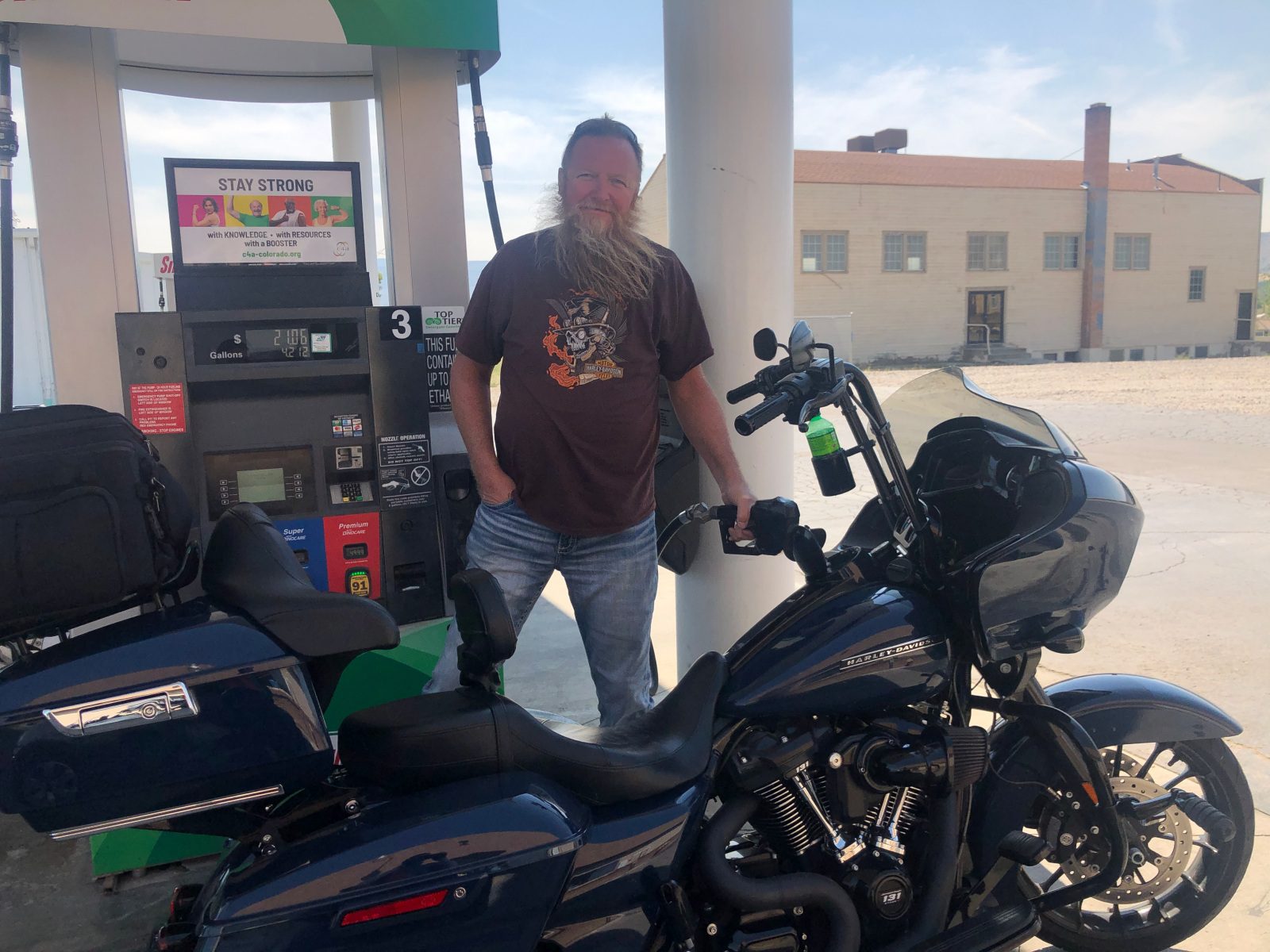 We stop at Loma, about a half-hour from our final destination. We’re hot and tired and craving a cold drink and energy from a chocolate bar. I meet Dee from Idaho. He’s spending a week touring Colorado. I tell him what I’m doing and ask if he’d like to trade his Harley for my Surly. “No, that looks like too much hard work,” he says. 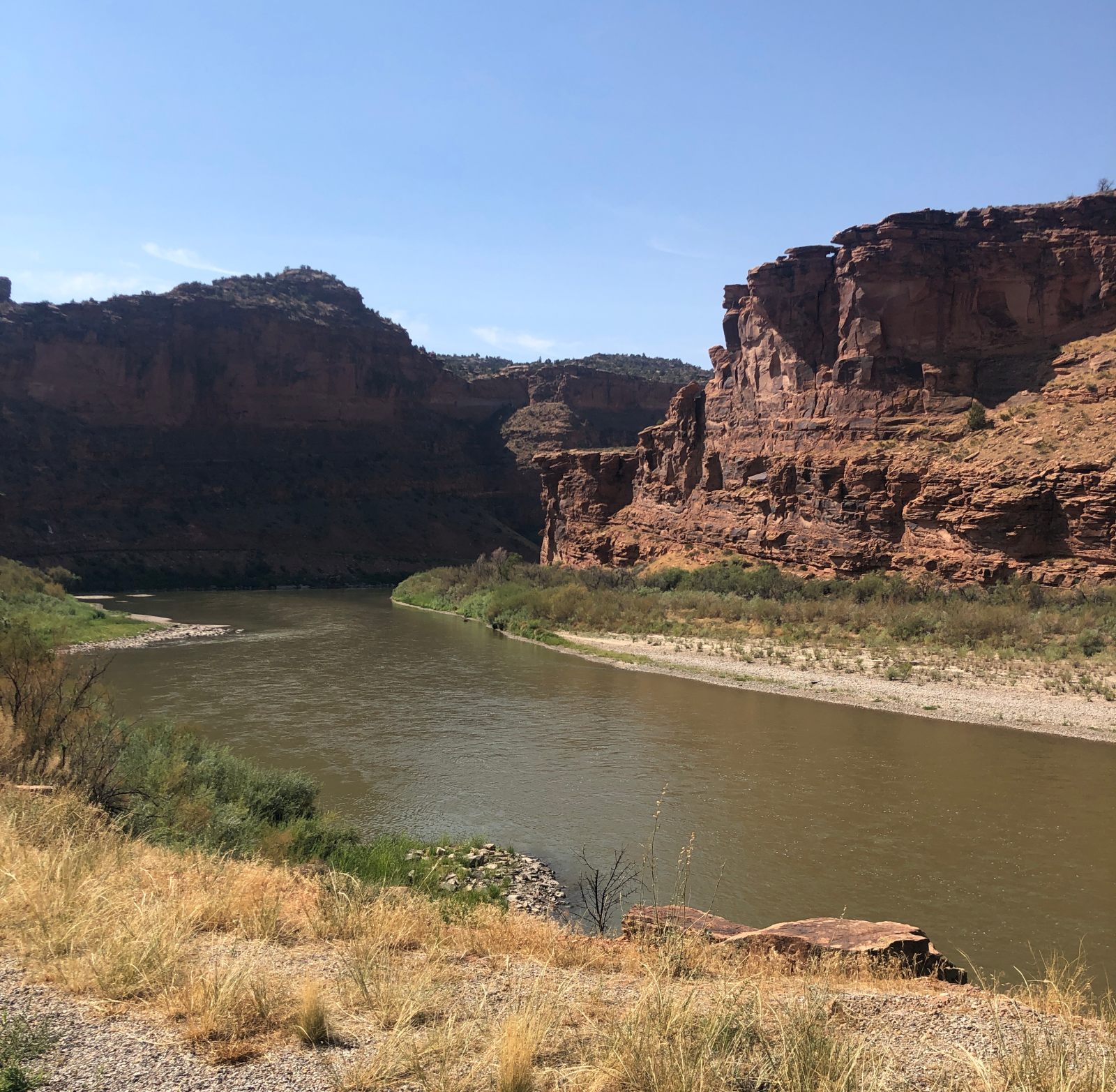 Our final riding day of the week proves to be the most spectacular. The towering rock formations and red sandstone cliffs bordering the Colorado River are awe inspiring. Every turn of the road elicits a gasp of wonder. 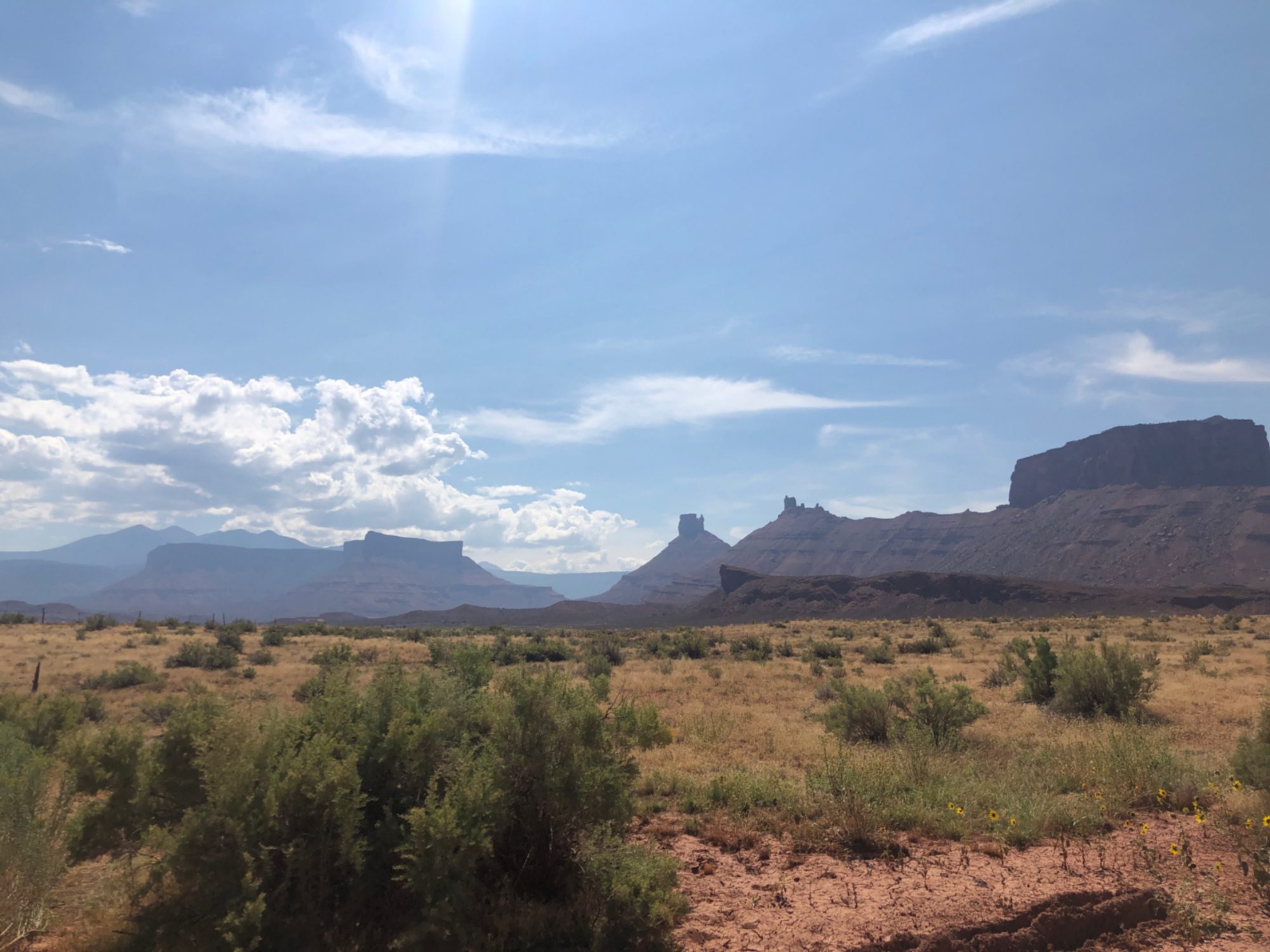 The red hills, age-old Titans frozen in time, remind me of Petra, the ancient rose red city, carved from rock as red and as imposing as these. If I were of a fanciful disposition I could imagine long parted extra-terrestrials forming them, the way a potter turns red clay into magnificent creations.

The beauty is intense, so is the heat and the way is long. The Cowboy Grill, the first possible stop for a cold drink, is at 120 km. When I get up to go my legs feel like lead. It’s been a long week and suddenly I’m overtaken by an immense wave of exhaustion. Reluctantly, I haul myself back into the saddle. I haven’t got much choice and Moab and a real bed and rest waits for me. Only another 26 km to go.