As I was finishing my burger (licking the plate clean and reaching for a friend’s french fries) I noticed that I had a message and the preview on my lock screen showed a photo of our cleverly locked bikes. To my surprise, someone was asking me if my pink bike had been stolen, as unbeknownst to me and my friends, rumour had been circulating online that a time trial bike and some others had been clearly stolen and stashed. 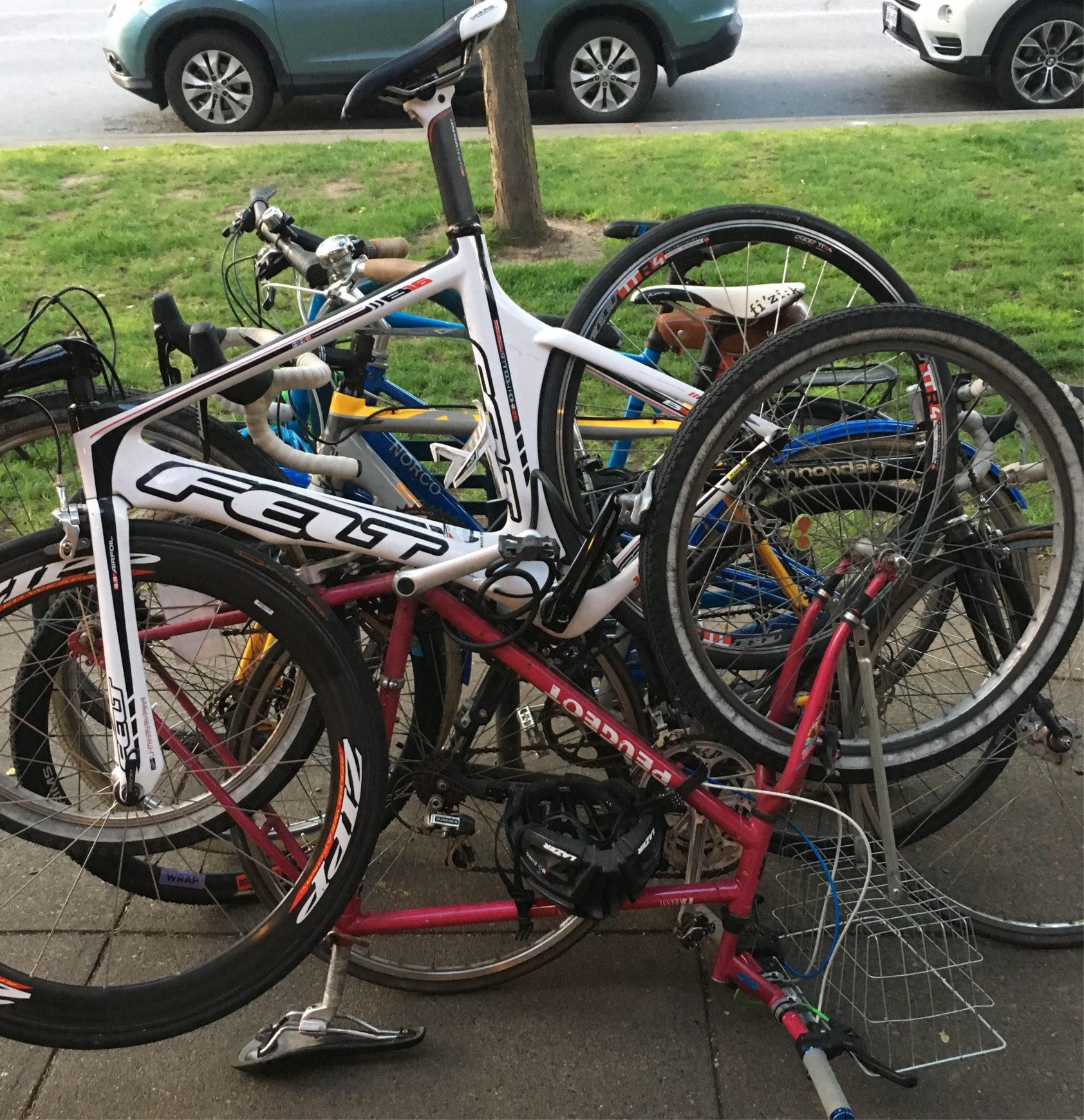 A member of The Stolen Bicycle Avengers, a Victoria Facebook group dedicated to returning stolen bikes to their rightful owners, noticed this odd pile of bikes outside of a restaurant and took it upon themselves to post about it. “Yates and Vancouver. Calling non emergency line” was the caption that accompanied the photo of our beloved bikes which said member had shared.

“Pick the entire mess up and transport to Vic police. Total BS that this is allowed to continue on public streets.” read one comment. “I feel like I might have seen that white Felt bike missing on this site in the past few days..” read another, to which someone else responded in agreement: “very recently stolen.” Now that was total BS. That time trial bike hadn’t left my friend Ryley’s basement in months. We dusted and de-cobwebbed it before heading out!

As I scrolled through the comments which had been accumulating for 40 minutes or so at this point, I found one that mentioned that the stolen bikes had been called in. Uh oh…Then another, quite dramatically I must say, suggested that the poster call Helps (our mayor) as she “…has a crisis on her hands.”

This just got political.

Suddenly I felt guilty. Had I done something wrong? Are there laws about how to lock up your bike? Would our bikes still be there or had the police come to pick them up? Oh, how ironic would it have been if the police took them?

I stopped stealing fries and ran outside to make sure our bikes hadn’t been stolen. They were still there (phew), but I felt like we needed to grab them and leave. I kind of felt guilty. The only crime that had been committed, as far as I knew, was that my side of onion rings came with a $3 upcharge that no one warned me about.

I responded to the post, thanked people for their concern and told them that the bikes belonged to my friends and I and that we had creatively locked them. I was then the subject of some slight belittlement.

Anyhow, this whole situation made me feel a little insecure. I sort of felt like I had done something wrong and was a bit frustrated at first. I then realized, of course, that the intentions of the poster and commenters were mostly good, in that they wanted to ensure these bikes remained with their owners.

RELATED: How to pick the perfect bike for you

So let this be a lesson to us all:

1. Maybe don’t lock a TT bike to a bunch of junky bikes. Or, if you do, just leave a note that says “not stolen, don’t call the mayor.”

2. More importantly, check if your city has a Facebook group like this! So many people have been reunited with their stolen bikes and it can be a really positive resource!

I’m grateful for the concern of others and that I now know where to inquire if a bike is stolen from me. However, let us also be careful and not hypervigilant, as I’ve seen a few posts in that group which serve to profile people and perpetuate certain stigmas and suspicions toward people on the street, which is certainly not healthy.