In 1613 a Japanese delegation of about 120 officials and merchants  sailed across the Pacific to Acapulco it what was then Nueva España. The head of the mission was Hasekura Tsunenaga, a samurai in the service of a powerful feudal lord. His mission was to negotiate a trade deal with Mexico. The incentive for the Spanish was a promise to open the doors of Japan to missionaries.  Hasekura was accompanied by a Franciscan monk with ambitions of his own to oust the Jesuits from their pre-eminence in Japan and be named the bishop for Japan. This curious byway in the history of East-West relations formed the basis of Susaku Endo’s novel, The Samurai. That’s how I learned of it. (Endo’s earlier novel, The Silence, was adapted into a film by Scorsese a few years ago.)

As we criss-crossed Mexico I thought I might be cycling some of the same routes that the Japanese took. I reread Endo’s descriptions of Hasekura’s experience.  How familiar it was to me.

The landscape of Nueva España, which they were seeing for the first time, was blinding, hot and white. Ahead of them gaped an endless wilderness studded with giant cacti, and in the far distance stretched mountains spotted with granite, looking as though they had been sprinkled with salt. They could see shabby huts, the homes of the native Indians, their roofs fashioned from mud and leaves and twigs. 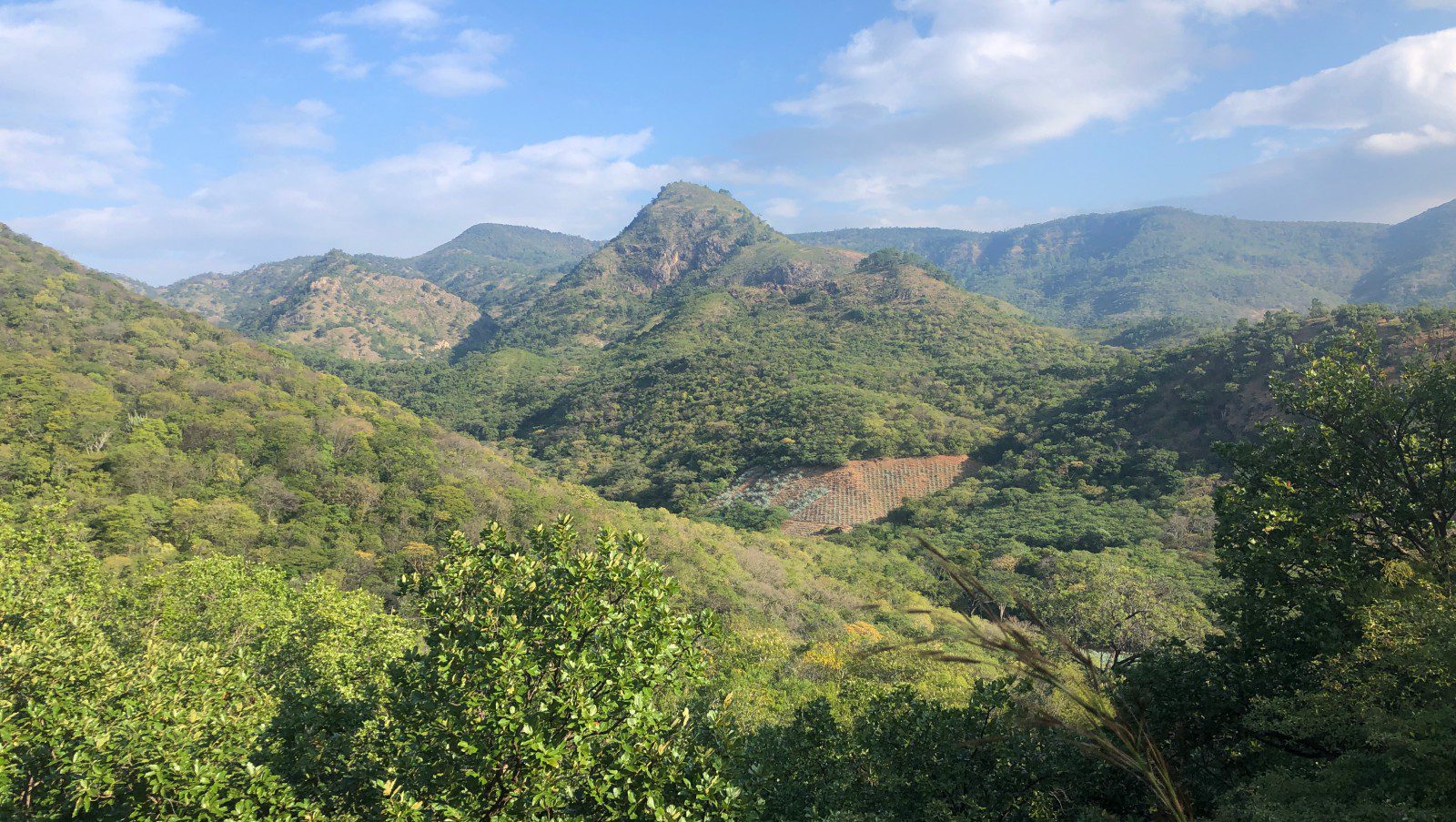 I thought how in many ways, particularly in the smaller villages we passed through, little might have changed in the intervening 400 years. Scratch the surface of modernity and the old ways would be revealed. Sometimes no need to do even that. There were bullocks pulling wooden carts; men weeding fields with hoes; women pounding maize into flour with large wooden pestles.

In Hasekura’s time Spanish missionary activity was very active but the Christian presence wasn’t yet as dominant or omnipresent as it is today. Churches and crosses are so integrated into landscape of city and country that they become almost invisible like the dense underbrush in the forested hills we passed by. 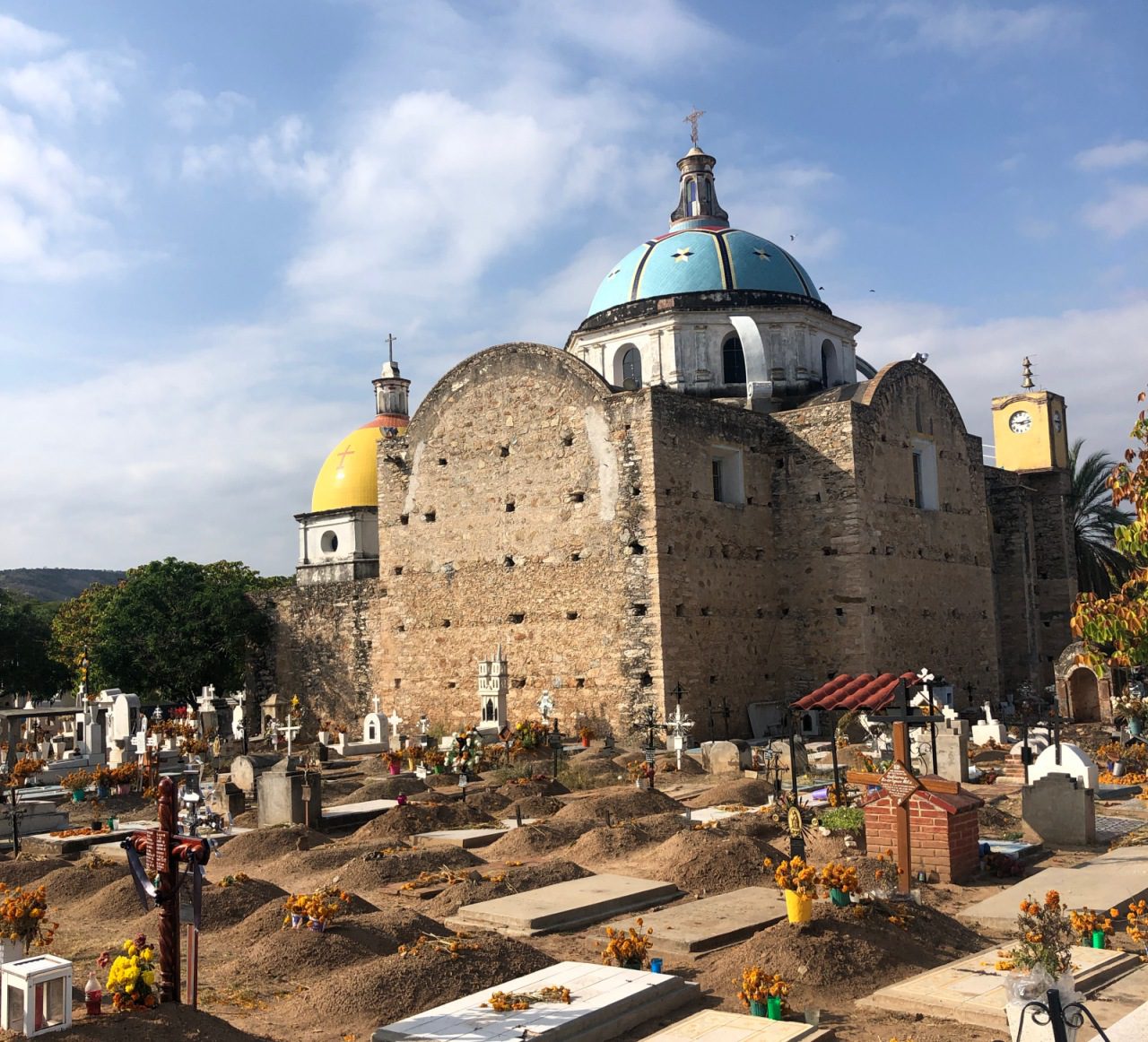 The meanest village might boast a spectacular domed oratory. Ocotlán’s massive cathedral celebrates the miraculous appearance of Christ. The Basilica of Our Lady of Guanajuato was built some sixty years after the Japanese had come to this strange, tropical country. It features a large wooden sculpture of the Madonna and Child supposedly carved in Spain in the 8th century and miraculously preserved through the Moorish conquest and  later centuries. It remains even today, worshipers say, as immaculate as the Virgin herself.  Legend has it that if the Church of San José Obrero in Arandas is ever completed the world will end.

The experience of visiting the churches in Mexico is different from a tour of the great cathedrals of Europe. Inevitably, they speak of the colonial history of the country. But it’s not as simple as that. The church has become inextricably interwoven into the lives of the people, but in a particularly Mexican syncretic fashion. Over the centuries myths and legends have formed around cult sites, epiphytes, a magical realism that remains palpable and alive.  There are other worlds, alternate realities which here one seems more readily to enter and exit.  This is nowhere more evident than in the Day of the Dead celebrations. 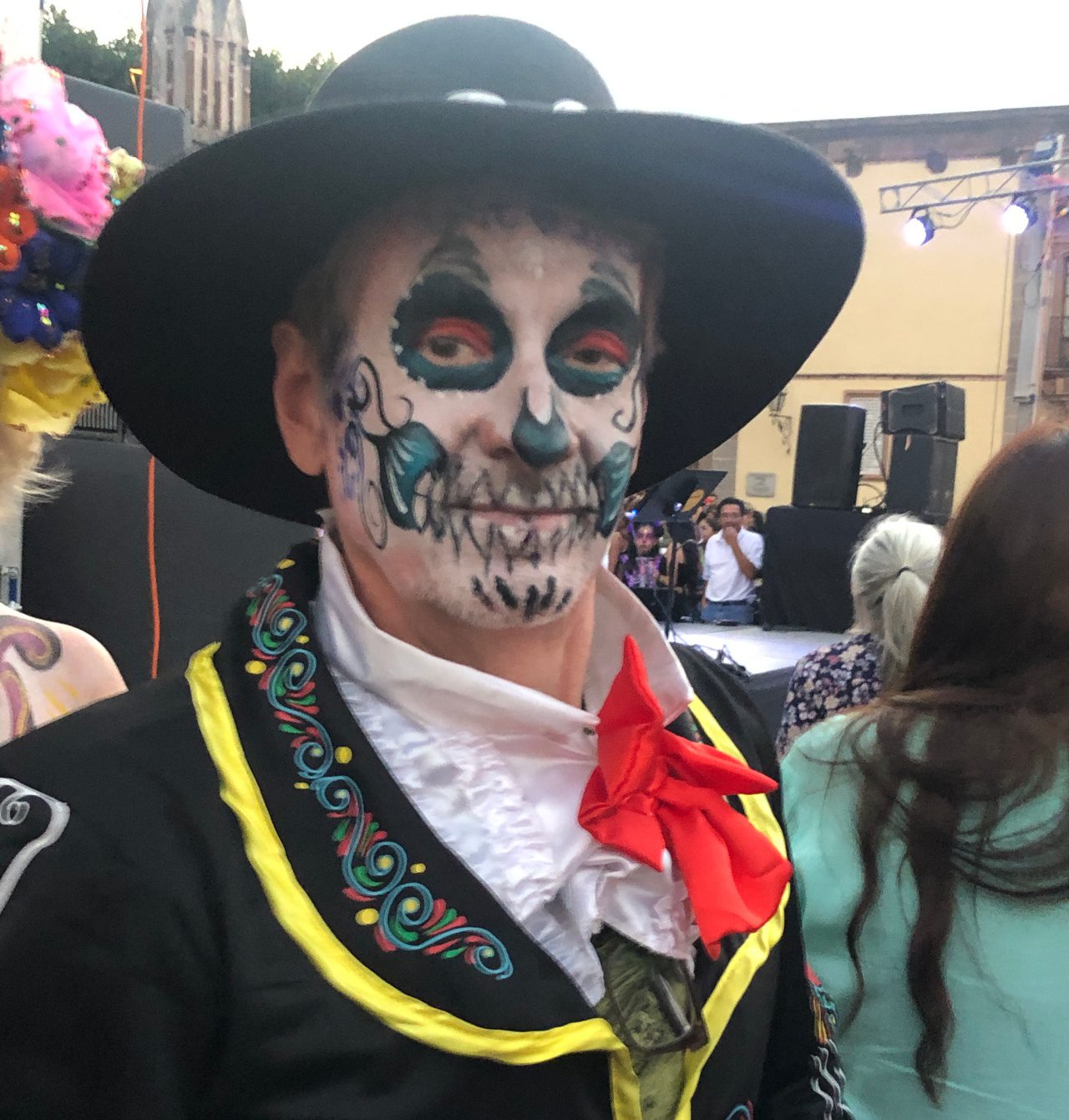 In the event, the worlds of East and West did not meet in 1613. Hasekura did not succeed in his mission. Japan remained closed to the outside world for 200 years until American gunships under Commodore Perry in 1854 forced open its doors to Western trade and influence. Ah, the ironies of history. The year that Perry forced the Convention of Kanagawa on Japan, the British were battling the Russians in Crimea. Yesterday, America decreed no doors could be closed to its manifest destiny; today the States builds walls to shut the world out, that world which America famously invited to its shores with words inscribed on the Statue of Liberty.

Give me your tired, your poor,

Your huddled masses yearning to be free.

America may disregard its history but Emma Lazarus’s call is being heeded. As we  cycled south to the Guatemala border we began to see small groups, mainly young men, striding determinedly northward. The first I knew of it was at a lunch stop. Philippe, assistant tour leader, said, “You just missed the Venezuelans”

“The refugees.. There was a group of them. They asked for water. I gave them food as well. I wanted to talk to them but they were in a hurry. They said they had walked from Venezuela across the Darien Gap.” 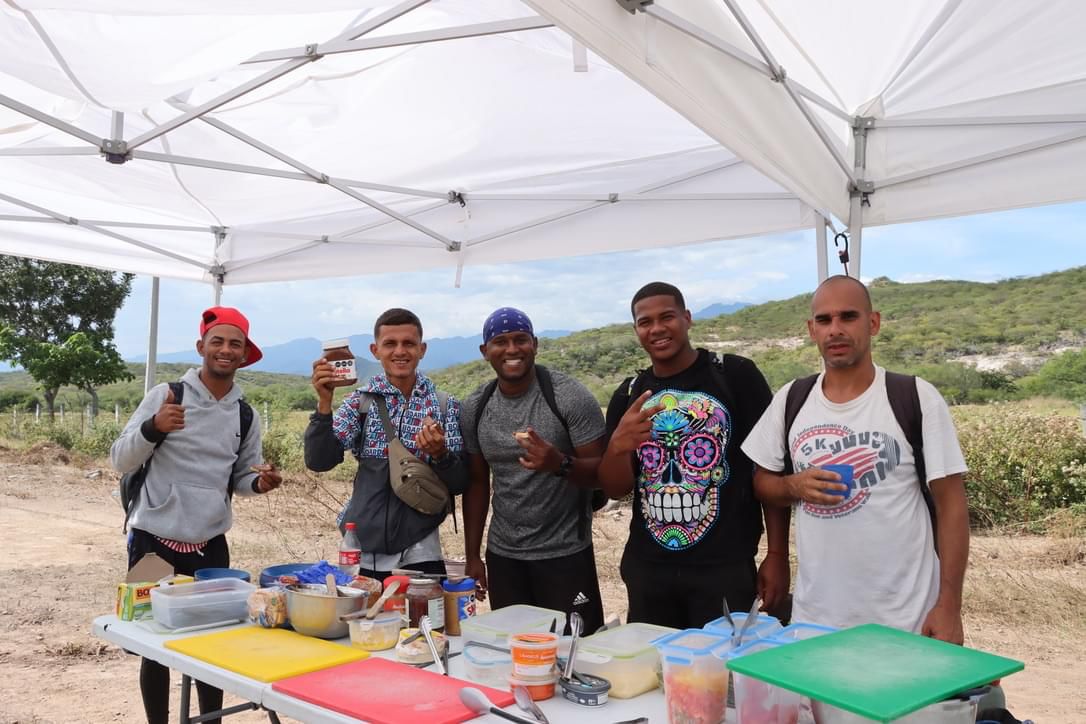 Philippe was troubled by the encounter. How to account for the vast differences in their respective fortunes? “I won the lottery,” Philippe said. I said, “It is true of all of us on this trek.”

I asked him, “What does that do to you? How do you feel?”  He pauses, silent for a moment.  He doesn’t have a direct answer. “I don’t feel guilty,” he says. Another pause while he tries to frame his mix of feelings. His fortune is not of his doing; neither is their misfortune.  Finally, he says that what is important is a just society. “We can’t have these great gaps between haves and have-nots.”

We cycled into Tapachula near the Guatemalan border for our final rest day in Mexico. It’s been a hard week of cycling from Oaxaca: close to 700 km over five days with 5,000 m of climbing in hot, humid conditions.

We were staying at a hotel a 15-minute taxi ride away from the center of town kitty-corner to a large, modern mall. I  wandered across to find some food and then back for an early night. The mall was a head-twister. From one moment to the next I was transported away from the reality of the road into the anywhere, virtual land of our consumer world.

The food court was packed. People were lined up at the Burger King and Subway. A stage had been set up at one end with a giant blow-up Santa swaying to the air conditioned currents of air. It was Revolution Day, a public holiday. A military band materialized, bugles and drums, belting out martial numbers in front of Santa and a giant screen showing a World Cup match. 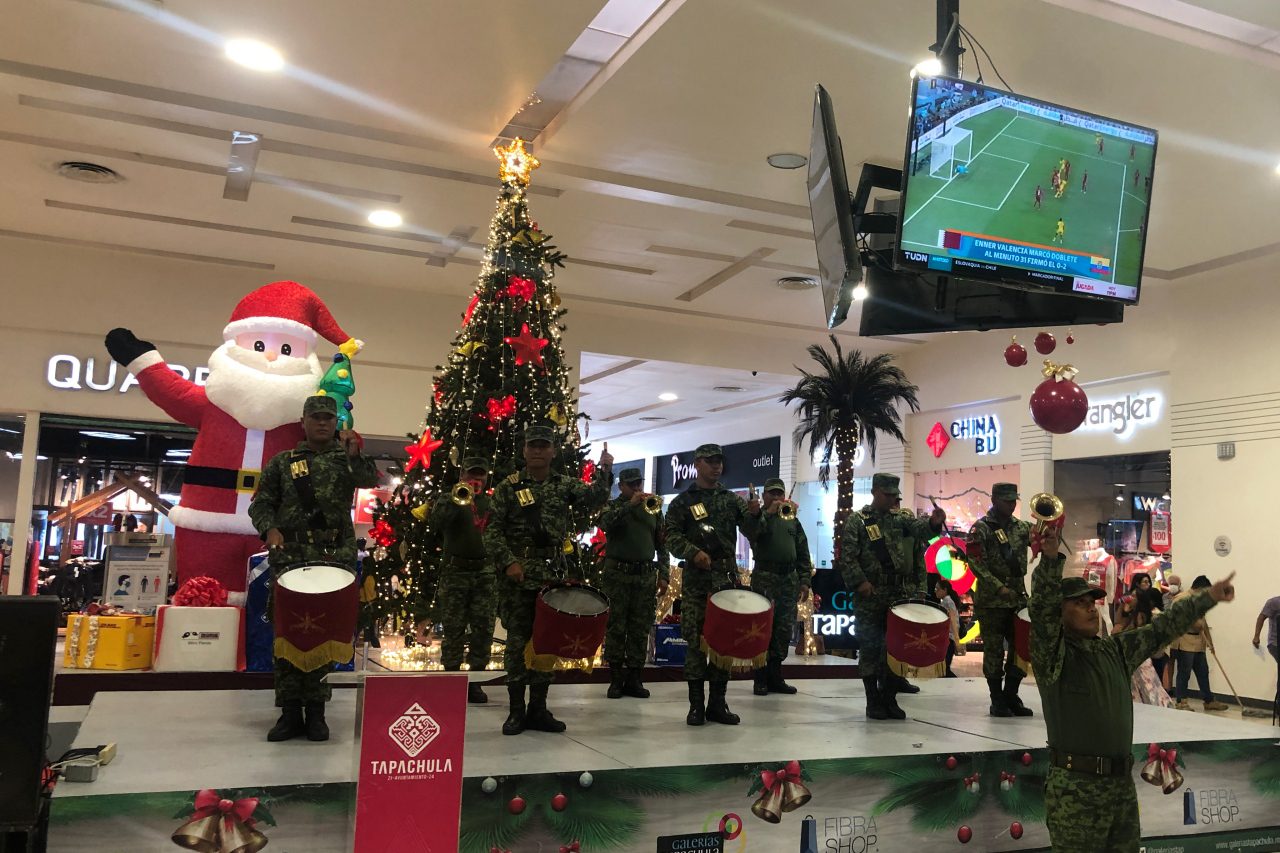 I was ready to crash when Philippe called me. “You have to come to the town square.” I hemmed and hawed staring at my bed. “No, Tom, this you have to do,” he insisted. A short while later Philippe and I were wandering around Tapachula’s central plaza.

It was about 9pm and the place was hopping. There were about a couple of hundred people, men, women, children. Some were bedding down in one part of the square. In another a group of young men were rapping. Others were hawking a variety of wares.  I didn’t hear a word of Spanish.

“It’s Creole,” Philippe told me. “They’re all from Haiti.” It turned out that Philippe spoke Creole. He had spent a year in Haiti and picked up the language from the women in the market place. We stopped to talk to Jean Charles who was pushing a wheelbarrow laden with cold drinks. He was surprised and delighted by a white guy speaking his language. 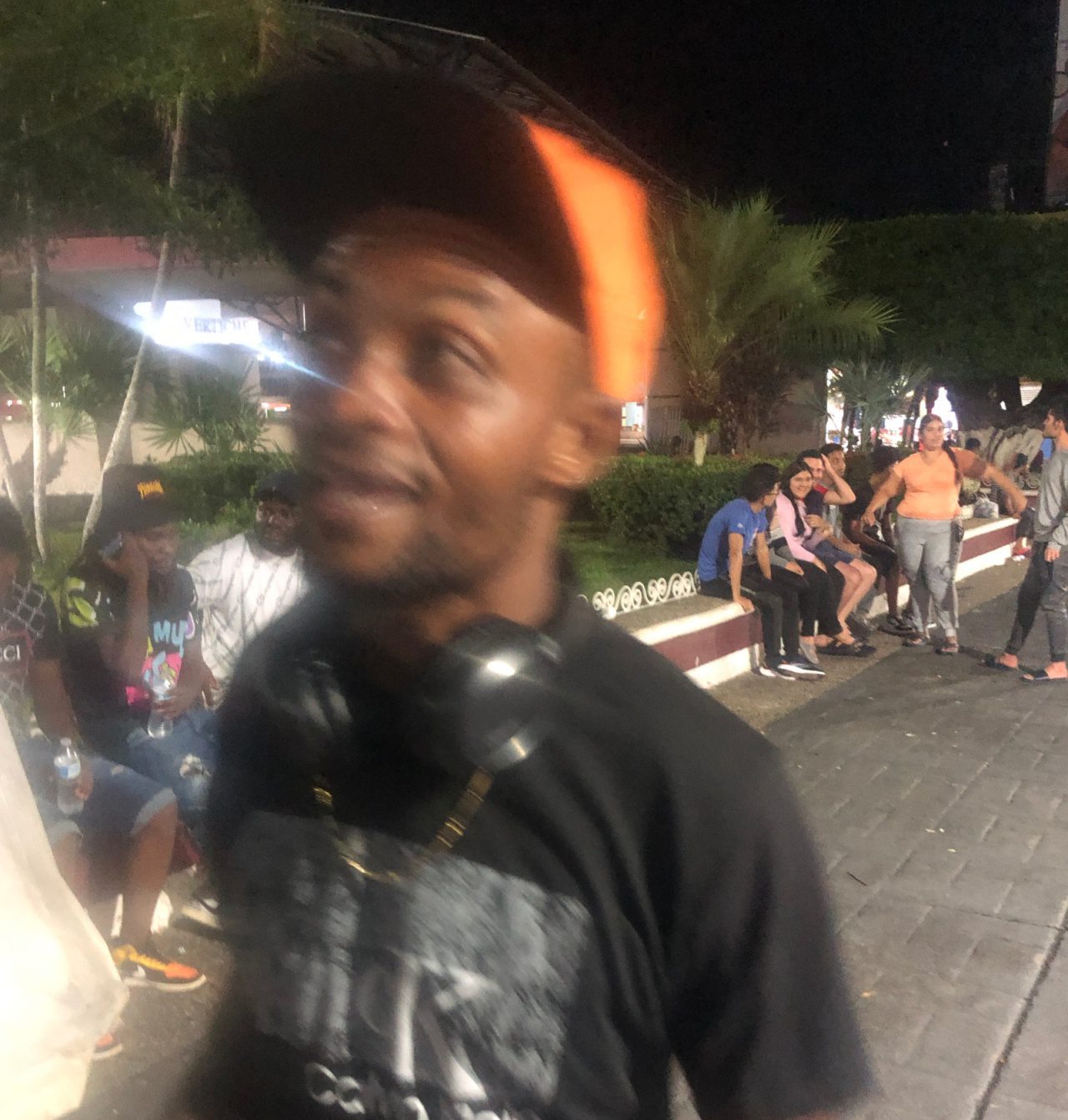 He tells us that all of them are here, Tapachula is the catchment area, waiting for a Mexican transit visa. I am reminded of Casablanca, everyone at Rick’s bar waiting for the transit visa that will take them to America, away from the Nazis and war. The Mexican visa is a precious document. It allows the refugees a year to make their way north. If caught and deported they would be sent back to Mexico, not their home country. Jean Charles has been waiting for two months. It’s his second time making this attempt.

The first time was in 2016. When he was deported he resolved to make his life there as best he could. The assassination last year of Haiti’s president, Jovenel Moïse, destabilized him. It propelled him once again to undertake the perilous and uncertain journey. We spoke to others; each had similar stories.  Everyone was making out as best they could: working as money changers, reselling local SIM cards, or subletting rooms.

The next day two of our riders, Ruth and Linda, wander round the square and fall into conversation with a group of Afghanis. Ruth tells me what she learned. They flew to Brazil because that’s where they were able to get visas. Then they headed north by whatever means they could find: bus, taxi or shank’s pony.  Like the Haitians they were waiting for their laissez-passer. 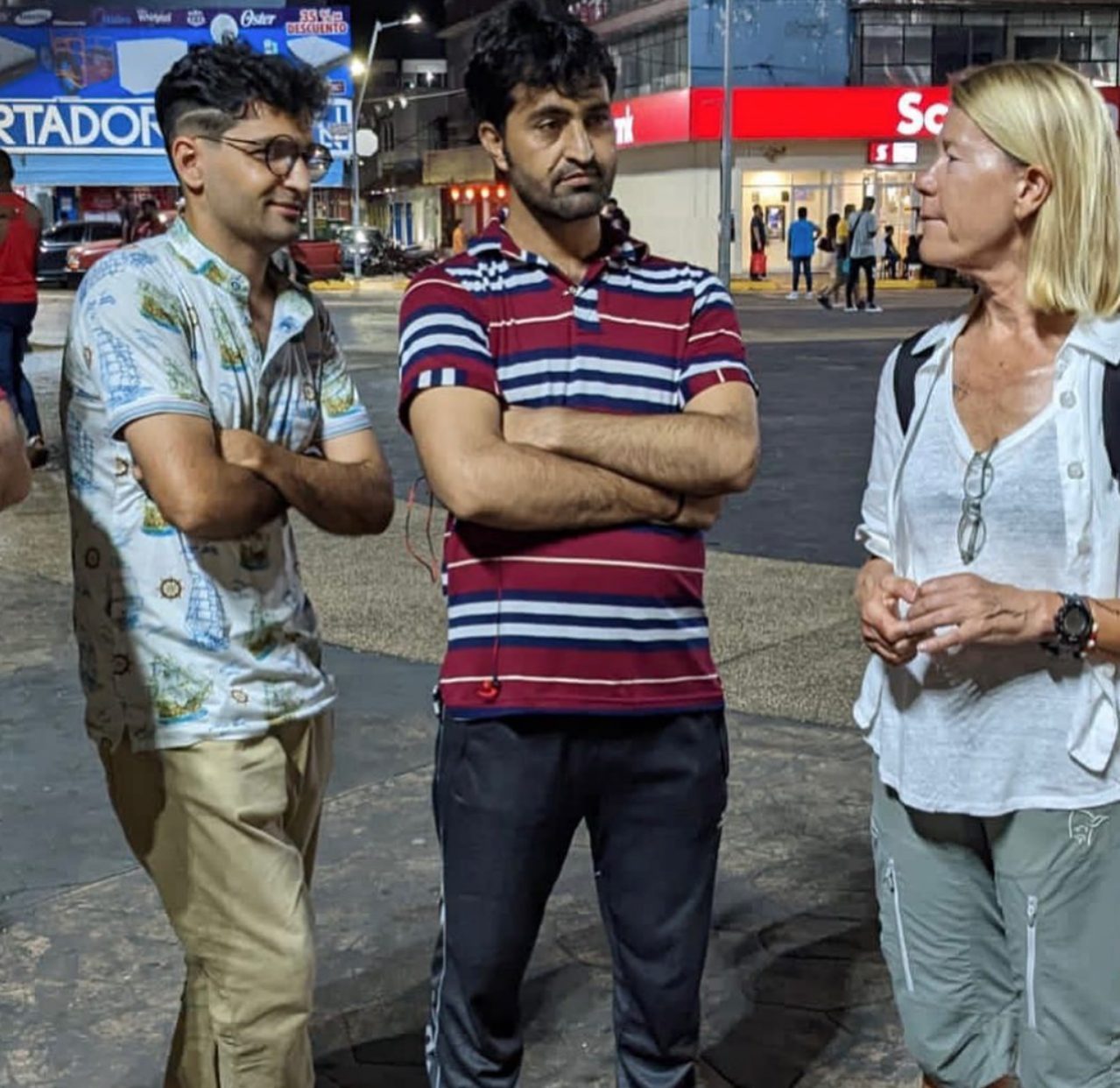 A few days later we were staying overnight by Lake Atitlan. The next morning we would pile, bikes, bags and all, into three small motorized launches to cross the lake to Panajachel where we would begin a long-day cycling to Antigua. At dinner I spoke to Luis, one of the hotel staff. I asked him where he had learned his English.

“I was in the States for nine years,” he told me. “I lived in Oklahoma, Mississippi and Tennessee. I had a good job. I was making money. I married. I have a boy. He’s seven now.”

“How did you get there?”

“I paid a lot of money, thousands of dollars to the coyotes.”

“Why did you come back?”

He had been picked up for a minor driving offense. Within a short while he was in custody and quickly deported.  He’s been back for five years still determined to get his papers and return to America. 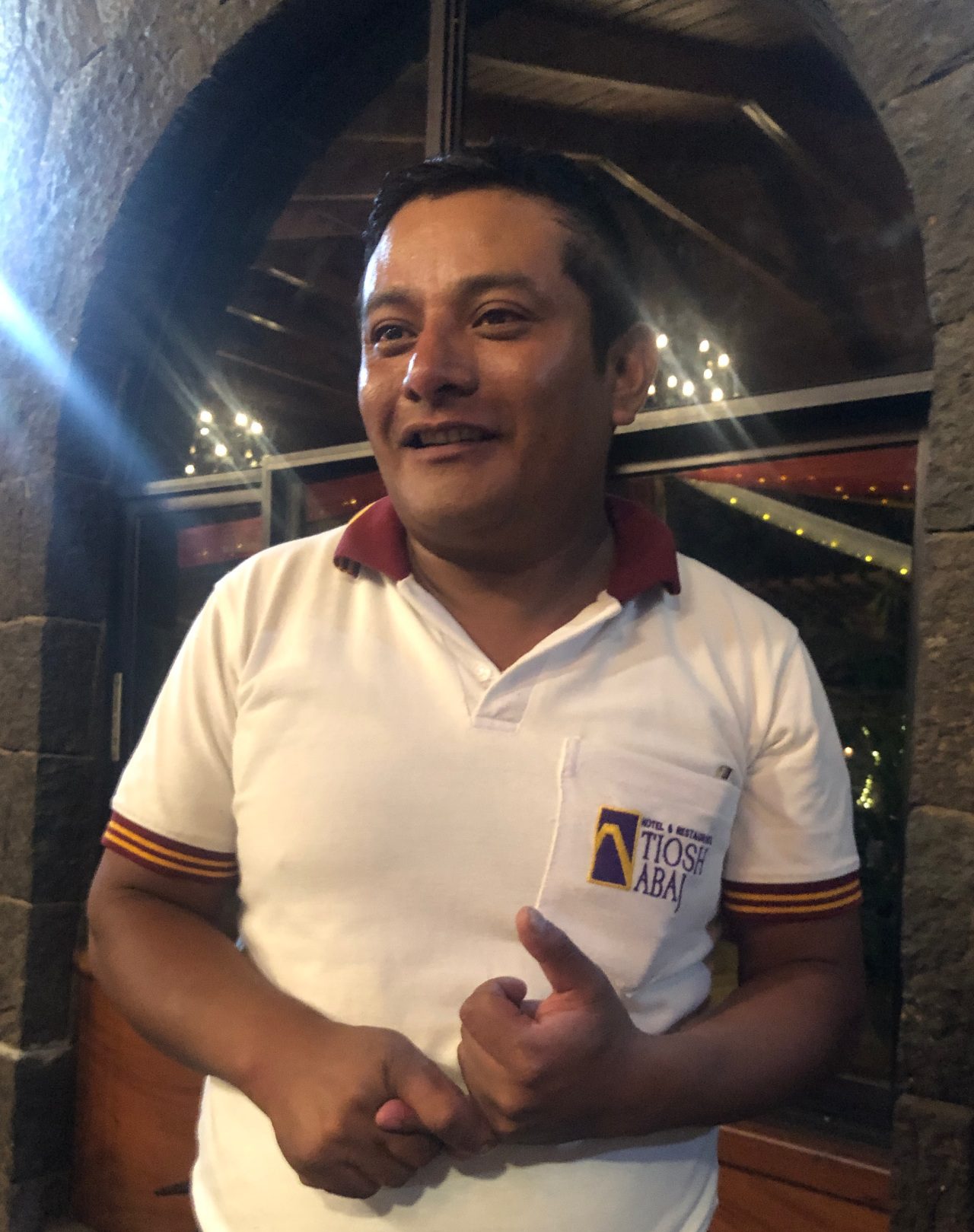 What struck me most with Luis and the others  I met  on the road or in Tapachula was their joy and optimism. They were on their way to a better and safer life.

I thought of my family history. I was a babe in arms when a small group of Jewish survivors struck across the Hungarian border in the dead of night heading to Vienna and points west. Several years of wandering brought us eventually to Canada, to that better and safer life. If I won the lottery of privilege it was because of the courage and fortitude of my mother and uncle who braved the odds. Yet, in the back of my mind I can’t shake the sense of how contingent that privilege is. My family, too, had lived a privileged life until their privilege became their doom.

Like salmon battling their way up river, the migrants and refugees stream northward. Their odds of making it are not good. In my mind I see that terrible wall in San Luis and the deportees in the detention room at the border post. But they must try. Some will succeed and our world will be better for the gifts of their talent and courage.