Words and photography by Chris Hatton and Carter Nieuwesteeg

After steadily gaining elevation all morning, punctuated by the steep slopes of Mt. Bolduc that marked our loop’s halfway point, a long, winding stretch of gravel was carrying us down from the clouds towards the valley floor. It was our first taste of real speed of the day. Then, cresting over a small hill on the way down, we all hit the brakes hard for the big black mass on the road in front of us. As it turns out, the bear was just as surprised to see us as we were.

We slow up and, thankfully, our fuzzy buddy takes off into the woods. A few corners later, we’re cruising down the descent again, albeit with a little more caution around the corners. Sheepishly laughing at the close call, we were all agreeing that Port Renfrew was staying true to its wild reputation.

After organizing our first event this summer, the Fernie Gravel Grind, Carter and I have set our sights on exploring B.C.’s backyard gravel scene. The places we know, the ones we don’t know yet, and the people involved in it. Our first stop is the incredible town of Port Renfrew, B.C., located on the west coast of Vancouver Island, in the unceded territory of the Pacheedaht First Nations. 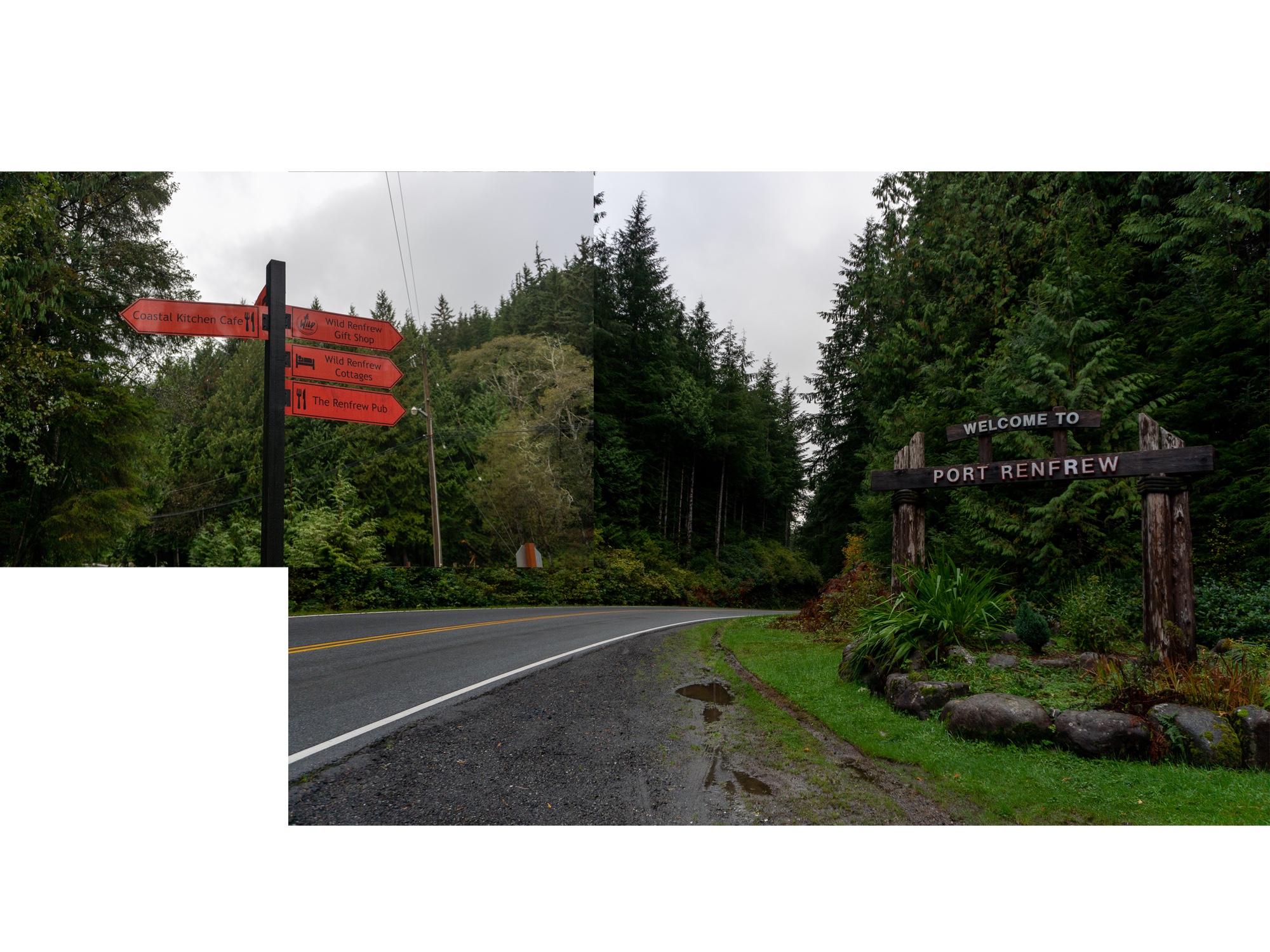 Port Renfrew isn’t usually a name that slips off the tongue when referring to biking hotspots, let alone for the newly emerging gravel scene. It is more well known as the Tall Tree Capital of Canada, for its dreamy beaches, and the iconic West Coast Trail, we’d heard rumours about the epic riding hidden in the surrounding valleys of the area. With that, our small group of riders from the FGG and Canadian Cycling Magazine went to explore this place for ourselves. What we uncovered was some amazing gravel routes, welcoming locals, and classic fall weather over a weekend of proper West Coast gravel riding.

Found an hour and a half Northwest of Victoria, the township of Port Renfrew is loaded with potential for surfing and gravel riding, and is touted as an up and coming destination for both. Yet, this area has flown under the radar as a gravel destination for most, and few riders know about the hidden riding gems found in the area. With a strong history of logging in the region, Port Renfrew boasts a wild network of gravel roads just a short ride outside of the town. With a seemingly infinite combination of routes that can be made by connecting them, this is a small piece of paradise for those that want to feed the wandering soul within them.

To the likes of adventurer, local legend and all-round great human Clay Webb (who happens to be a strong advocate for protecting B,C.’s endangered old-growth forests) and Rob Britton, professional racer for Rally Cycling and organizer of a local gravel event, The Last Ride, Renfrew’s back roads hold limitless potential. The two have paved the way for exploring the area’s gravel for a decade, connecting numerous routes winding through the nearby mountains.

Britton’s Last Ride event in 2018 opened our eyes to the area’s potential. The 100-mile route featured some incredible gravel roads, countless creek crossings, fantastic views, bushwacking, and a brutal climb up to an abandoned plane wreck on Mt. Bolduc. Having spent countless hours in that area hiking, biking, and paddling since the early 2000s, these two know the area better than most. The combination of seeing Brittons’s leg crushing training rides, and hearing about Webb’s seemingly unbelievable adventures created the tantalizing inspiration for us to dive deeper into the area.

Getting out there and recreating (more like attempting) an epic mission like the ones that these guys have been doing was essentially the goal. Inspired by the Last Ride, and with hints at where to aim from Webb, we set off on our own wild loop of our own.

Heading north towards Lake Cowichan, we cruised along the scenic, unpaved Gordon River Road to the base of Mt. Bolduc. Known for a WWII plane crash near its summit, Mt Bolduc is a 700m climb. Its gradients are comically steep and usually only accessed by ATV’s or seriously lifted trucks. We hammered up it, with Holly QOM’ing the hardest final part of the climb –  a 2.8km section averaging 19 per cent grade – in under 30mins. (And then went on to win the Tripleshot Cross Fondo 12 hours later in Victoria).

After reaching the summit, the weather shifted rapidly. Faced with aggressive sleet and frigid winds, our group opted not to stick around the summit long and set out working our way down the steep, loose descent. Back in the valley, we continued on along Harris Main. A series of punchy climbs felt never-ending, and our legs were not impressed with the earlier idea to punch it up the Bolduc climb. 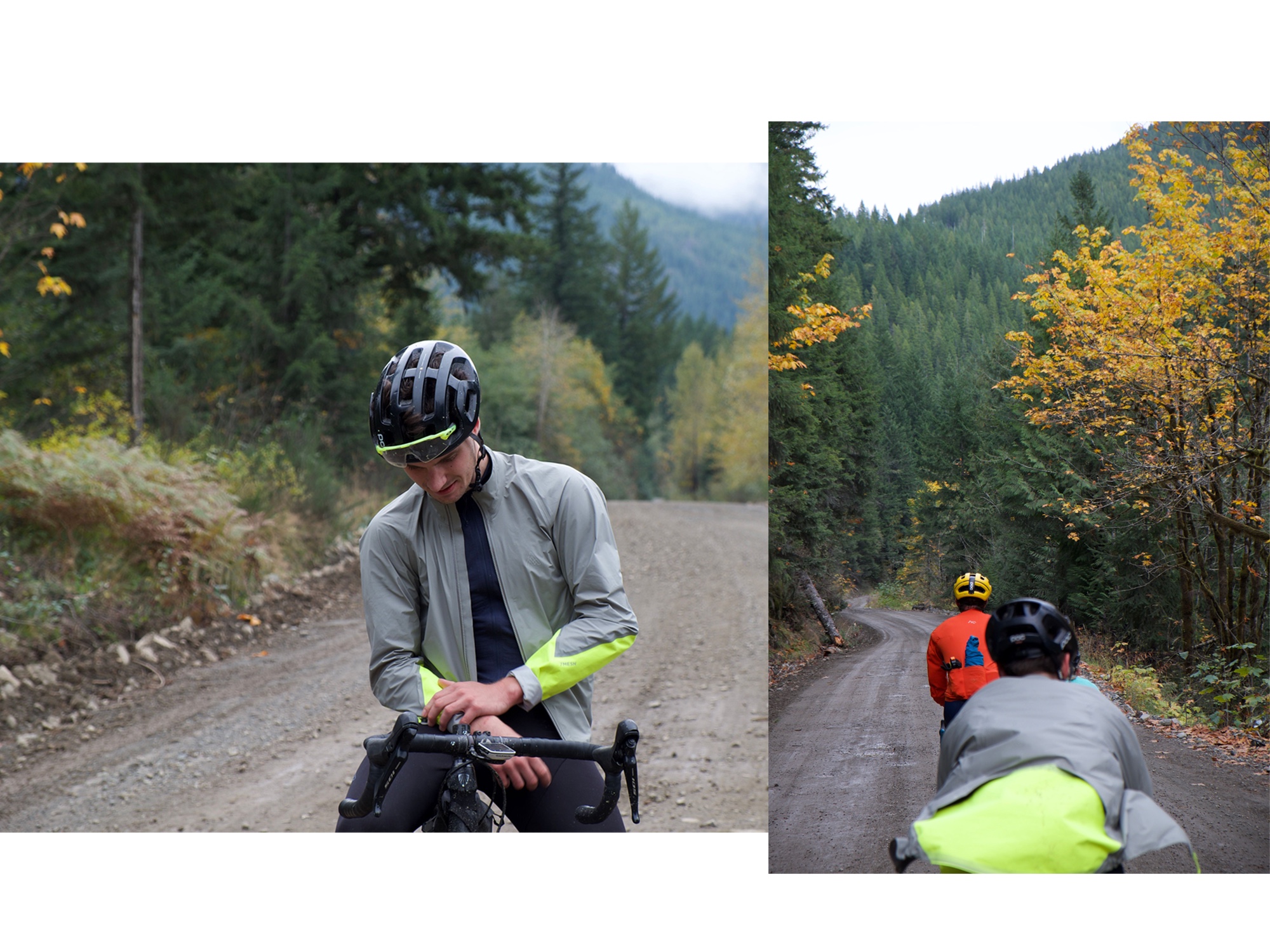 Harris Main then connected to the paved surfaces Pacific Marine Drive which smoothly flowed back down into Port Renfrew for beers and a much-needed shower. Having our fill of flat tires, gravel roads, and vista views, stoke levels were high, legs were tired, and an epic adventure was definitely had. 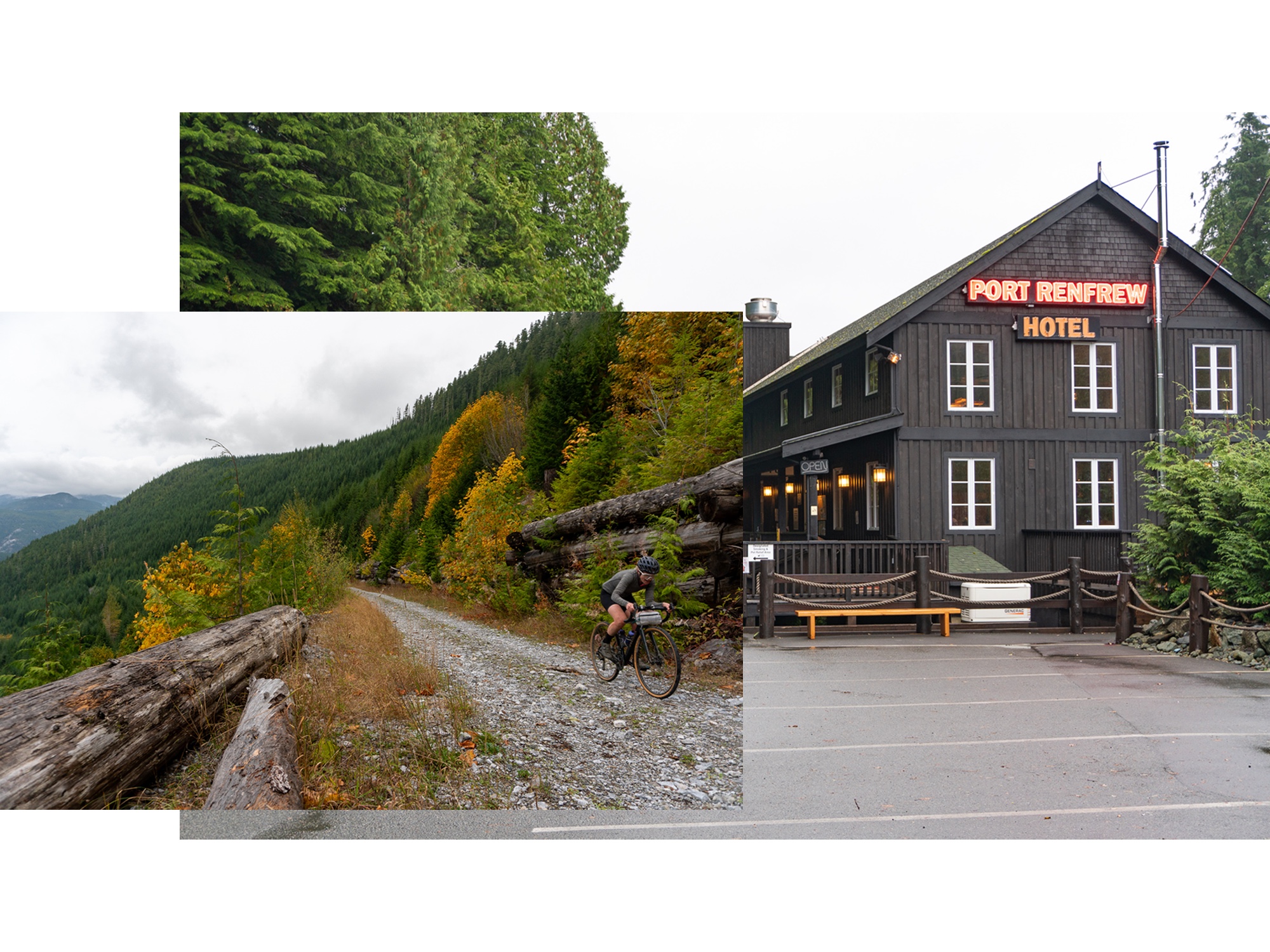 Rolling back to the Wild Renfrew Lodge after a long day in the saddle, a warm post-ride shower and change of clothes felt like a dream come true for our cold hands and feet. Hanging up our chamois, it was hard to avoid the tantalizing glow of the Port Renfrew pub sitting within eyeshot of our front door, and we quickly succumbed to the beacon of beer and good times shortly after. A double portion of Fish and Chips later and a few pints to top it all off was the perfect way to end the day, as we swapped stories and reflected on the epic adventure that we’d just had. 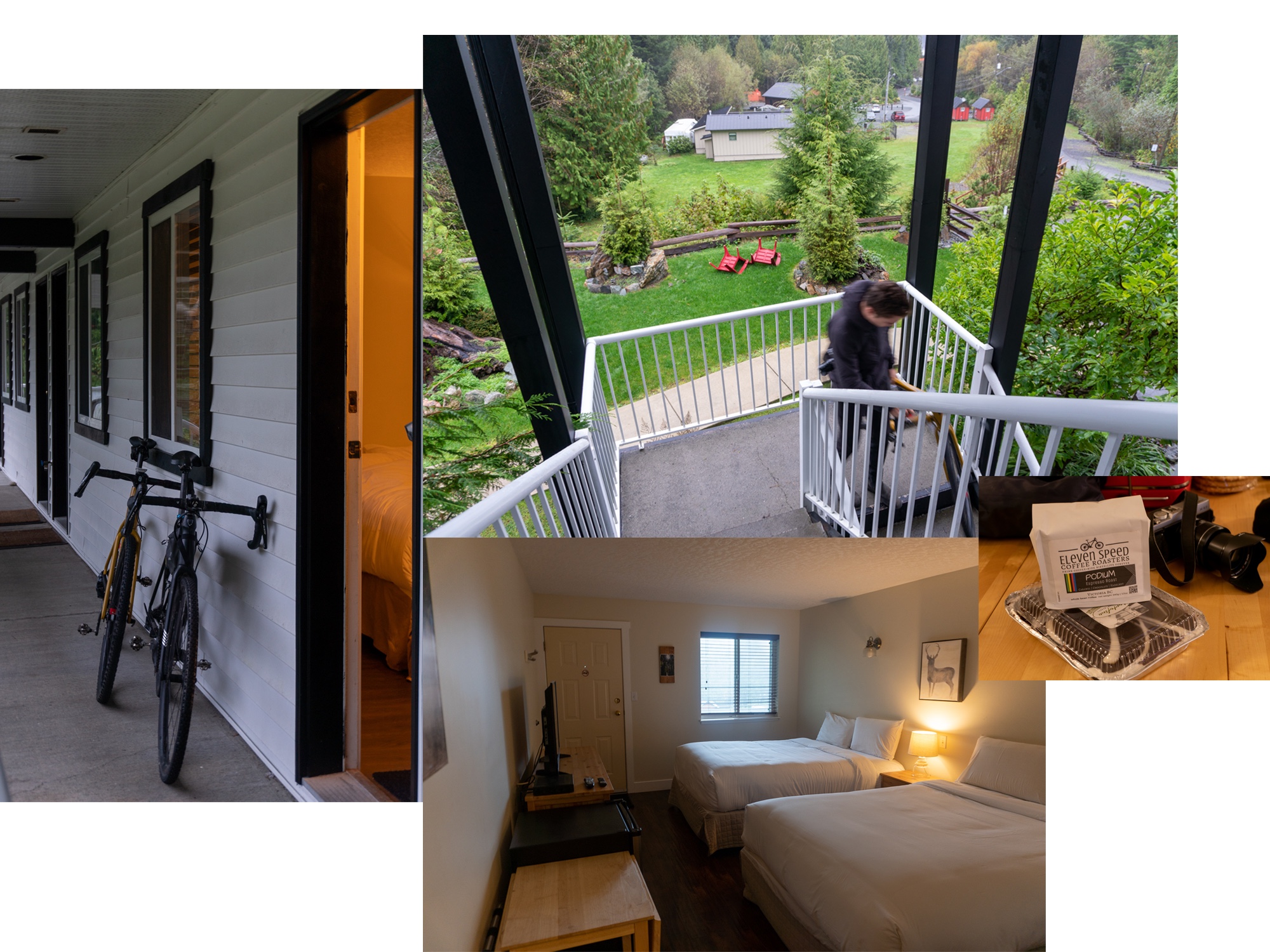 Enjoying our last bit of time in Port Renfrew, it was slightly hard to leave the peaceful isolation of this quaint spot that we’d been able to spend the last few days in. With no cell service in town, and definitely not once you leave it, taking a trip out here was a welcomed break from city life and the chance to disconnect from the outside world.

With Port Renfrew boasting a small general store, coffee roasters, and waterfront pub, it has pretty much all you could ask for on a quiet getaway on the bike. That said, it is an off-the-beaten-path place. For those more accustomed to big box stores, it’s best to pick up supplies in Victoria before heading up. Plan your route ahead,  make sure you have it loaded on your Garmin (or have a map), and have enough food to last you the ride. There likely won’t be many, if any resupply points on the route. 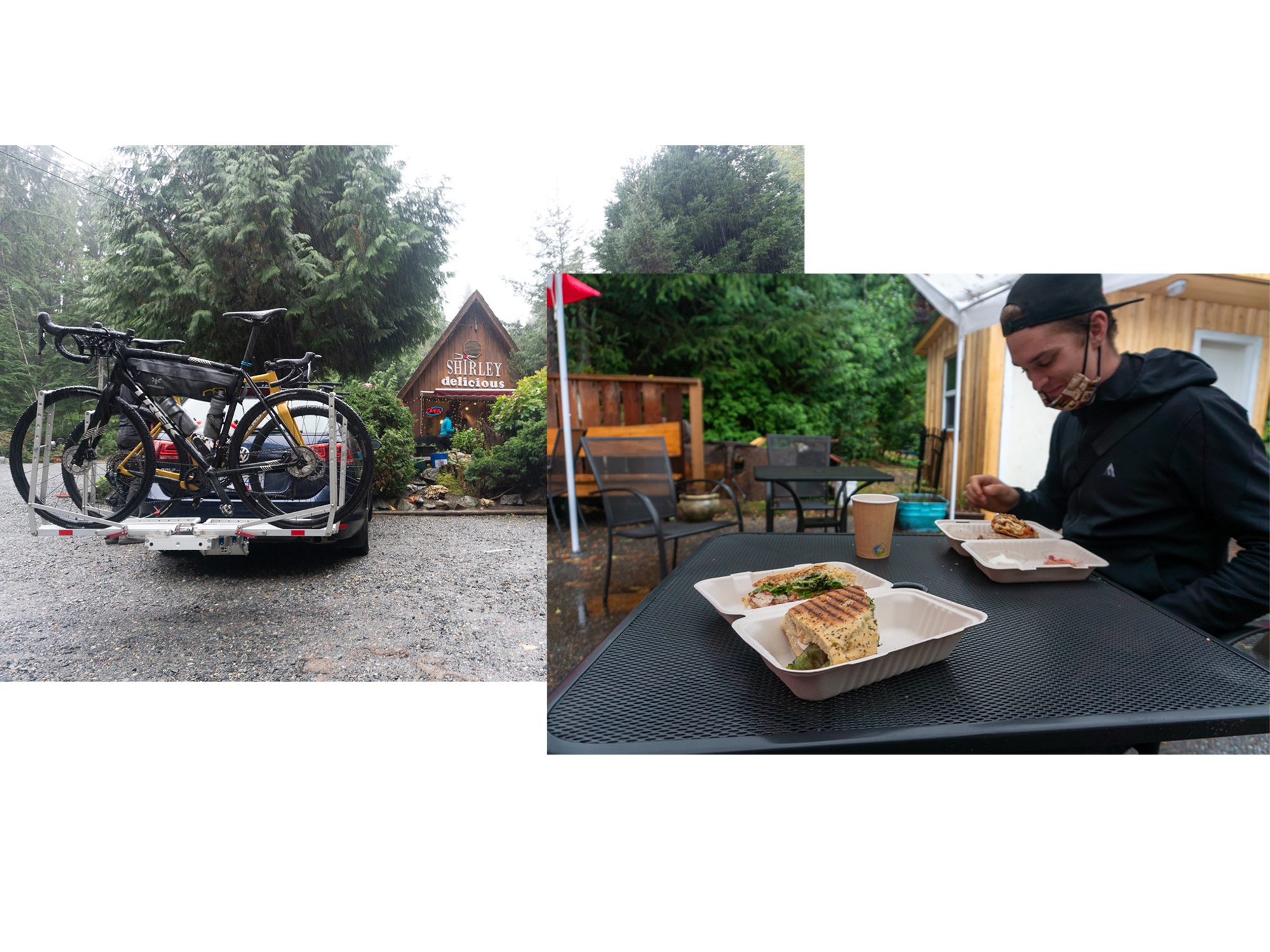 On the way back make sure to drop by Shirley Delicious, a go-to local spot to grab some grub 45 minutes from Port Renfrew. Perfect for a rest stop, quick coffee break, or lunch, we hit this place to and from our visit to Port Renfrew and is undoubtedly a high note to finish up on.

Thank you to Wild Renfrew Lodge and Cottages, 7Mesh and Eleven Speed Coffee for keeping us warm, dry and caffeinated through the weekend!

Chris Hatton and Carter Nieuwesteeg are the co-director and founder, respectively, of the Fernie Gravel Grind. After launching the event virtually in 2020, they’re working towards seeing the second edition to the originally planned format. When they’re not organizing FGG, or racing bikes themselves, they’re exploring trails and backroads all around British Columbia.

Our route around Port Renfrew can be viewed on Strava and more general info can be found at Port Renfrew Tourism.

We all rode slightly different style bikes for the day, from converted cyclocross rigs to dedicated gravel frames. Check out the different gear and snack strategies for all five bikes.