Carbon fibre rims are now well established enough that brands are starting to get confident, and creative with rim design. Sometimes this can be gimmicky. Sometimes it turns out that trying something new works even better than traditional designs. This is the case for B.C.-based NOBL and its new TR32 wheelset and its distinctive “sine wave” rim design.

The TR32 hoops consolidate two prior NOBL designs into one “B.C.-approved” wheelset said to combine cross country weights with trail toughness. It’s a big ask from a new design but, after a few months on the creatively shaped wheels, NOBL seems to have picked up on something interesting.

TR32 and the sine wave

The TR32 rim, introduced in 2020 as part of NOBL’s new Premium series, replaces two previous models, the TR28 and TR33. The new rim is actually lighter than the old TR28, so it disappears entirely. The TR33, NOBL’s existing trail rim, takes on the “Legacy” tag, and stays on for now. The new rim is intended for XC racing, stage racing and daily trail riding, for those wanting a lightweight wheel build. With its narrow profile, the TR32’s will double nicely as a gravel rim, too.

Before we get too far, let’s be clear. NOBL doesn’t get too far out of the box with its new rim design. There’s no silly “inspired by humpback whales” marketing here. At first glance, there isn’t too much of a difference between the brand’s sine wave design and a standard rim. Especially on the TR 32, where the shaping is more subtle than on its more gravity-focused models.

There are difference, though. The carbon fiber rims are thicker closer to the spoke holes and thinner between. This goes beyond the raised and reinforced area you see on other rims like, say, Santa Cruz Reserves. The “sine wave” part of NOBL’s design comes from a side-to-side shift that is supposed to maintain lateral rigidity at the rim’s svelte weight. It’s an interesting approach, making use of carbon fibre’s distinct properties to stray in a creative way from traditional aluminum rim design.

And the NOBL’s are light. They tip the scales at just 1,432 grams. Which is feathery for any XC rim, not just one claiming to be tough enough for technical stage races like BCBR, or, if you’re out east, Quebec Singletrack Experience. NOBL goes further, saying the TR32’s are strong enough for trail riding on a short travel bike.

When pushing for low weights, design tolerances get tight. To keep the TR32 rims light, NOBL uses a different design and layup for the front and rear rims. Both rims have a slim 20.5-mm depth, a 2-mm spoke offset and come in 28h only 29″ diameter. The rims are designed to work for tires between 2.2″ and 2.5″.

Up front, the TR32 is 32mm wide externally, with a 27-mm internal width, and weighs just 360g. NOBL claims it has the same lateral stiffness as the rear rim while being 25% less stiff vertically.

Out back, the TR32 has a narrower 26-mm internal width for the same 32-mm external width. The wider sidewall makes for better impact and flat protection, more vertical stiffness and a slight bump up to 390 grams. NOBL argues this gives a more balanced feel to the wheelset. 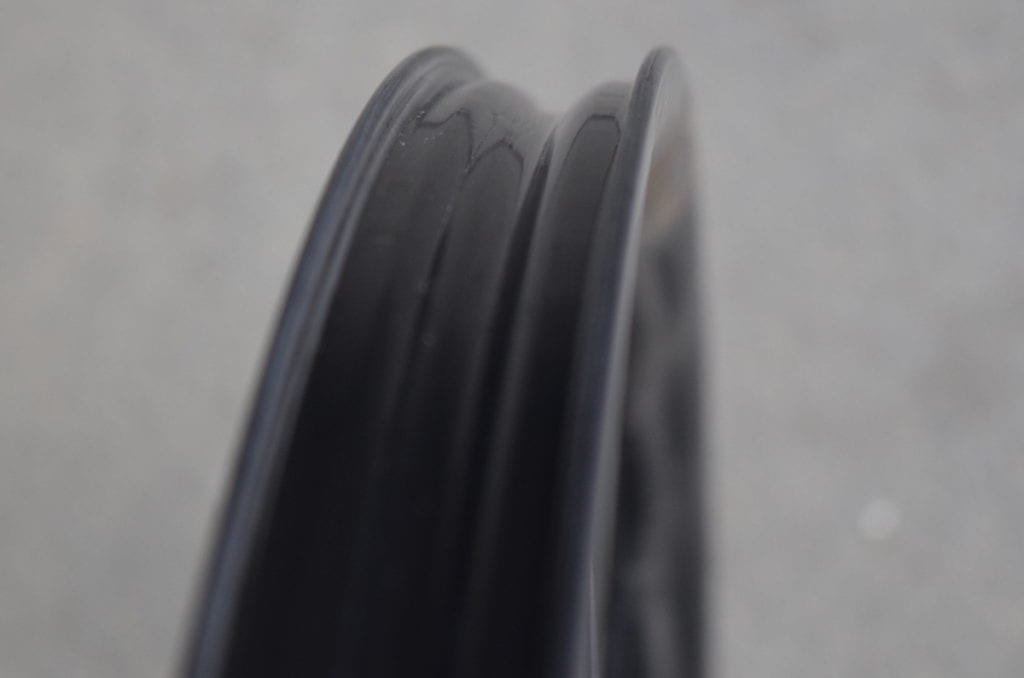 A deep centre channel makes it easy to mount tires. 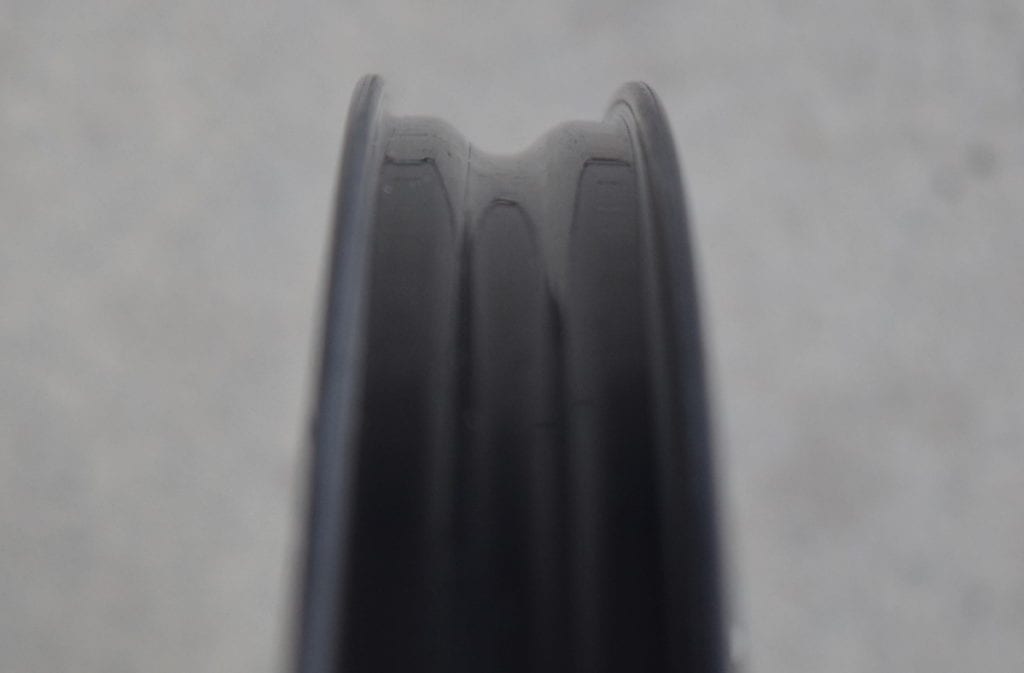 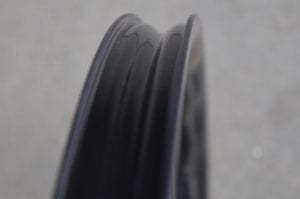 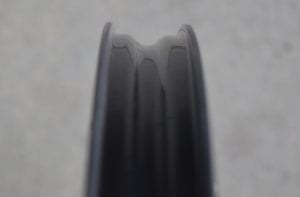 Setting up the TR32’s

Mounting tires on the TR32s was a simple exercise. Several different tires all seated with a floor pump, sealant and minimal effort. This is great for a race tire aimed at the stage race crowd, where you might not always have access to a compressor for mid-race tire swaps.

The wheelset I tested arrived dressed in black and gold labels with DT Swiss’ latest 240 EXP hub. NOBL offers to build the TR32 around a solid range of hubs, and price points, and a wide range of colours to match any frame. The 240 should be a popular option, though, with its easily serviceable Ratchet EXP system, subtle freewheel sound and quick engagement. 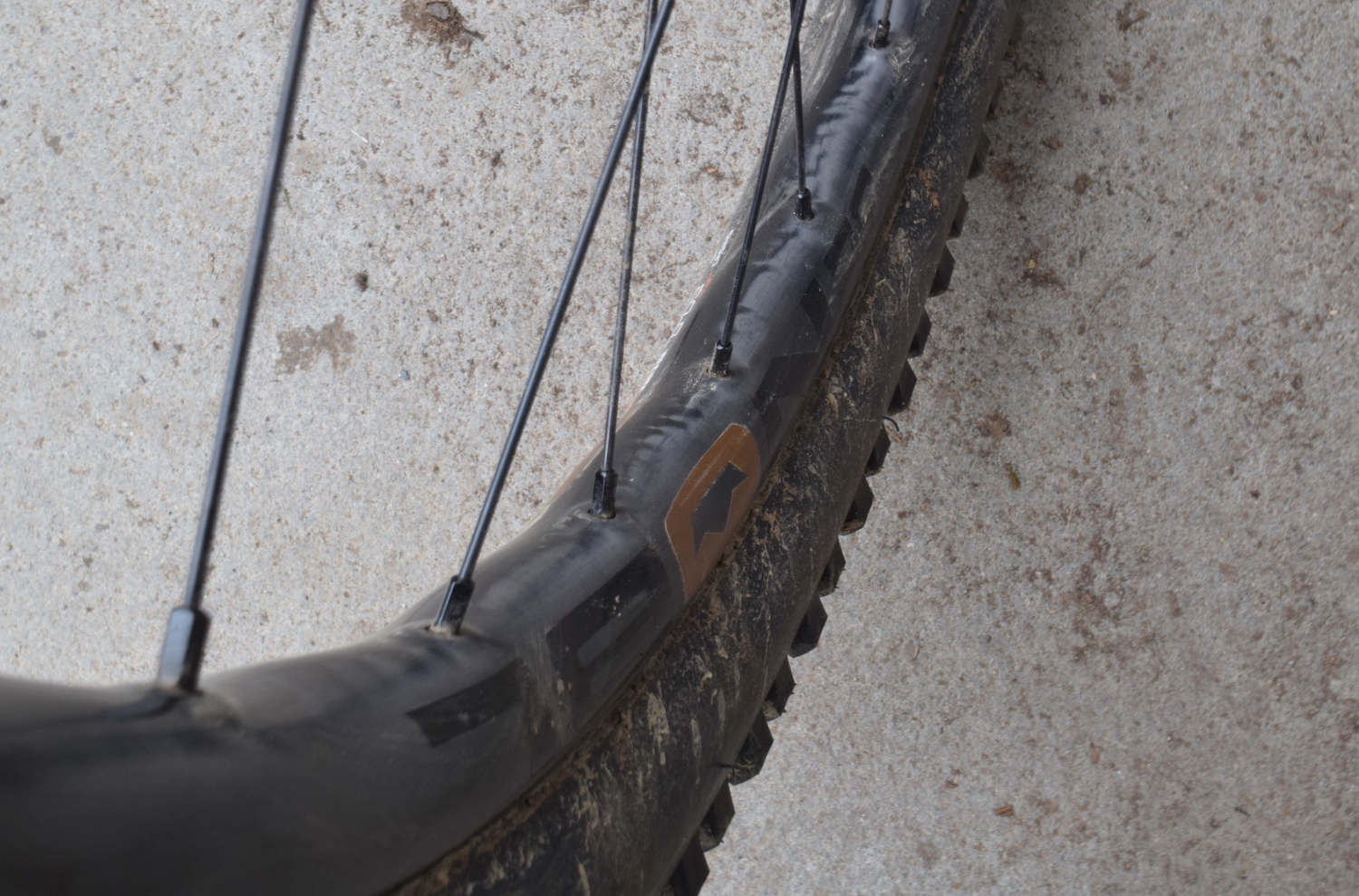 Ride the (sine) wave: TR32 on the trails

Over the course of a few months, the TR32 saw action on a few different bikes, ranging from 100mm XC race hardtail to a more trail-friendly 120-mm Intense Sniper T. The range of bikes worked well to show off the benefits of a bit of vertical compliance and the TR32’s more rugged side.

As you’d expect from a sub-1,500g wheelset, the TR32’s accelerate quickly when you stand on the pedals and are a pleasure to climb. NOBL’s vertical compliance claims aren’t difficult to feel. Riding them on an ultra-stiff race hardtail, you don’t have to run ridiculously low pressures to avoid feeling like your being beaten up by every root and pebble. While the World Cup crowd might want to feel every watt the second the freewheel engages, NOBL’s more supple feel will reduce fatigue over the course of a long day in the saddle. Or four or five long days in a row, if you’re stage racing.

Descending, or riding on technical singletrack, the unique sine wave design pays off again. There are stiffer wheels out there, but the TR32 wheels are easily supportive enough. There are more vertically compliant rims too, but NOBL strikes a good middle ground, which is all the more impressive given their low weight.

The TR32’s track predictably through rocks and roots, and will hold a line as you push hard into fast corners, putting paid to NOBL’s claim they’re tough enough to be lightweight everyday trail wheels. What little flex there is isn’t wasted. You’re not just losing energy or momentum in a corner. The TR32’s seem to snap and return, giving them a more lively feel.

Part of this performance is likely due to the tougher build of the rear wheel, which really helps carry the bike through corners. But maybe this bit of magic comes down to NOBL’s sine wave design. The lower profile, without losing material around the spokes, definitely cuts weight of the wheels. I definitely can’t explain if, or how the sine wave is responsible for the change in ride quality. But the TR32’s do have a supportive feel that made them fun on harder trails that push the limits of XC, and fast enough for more pure cross country racing. 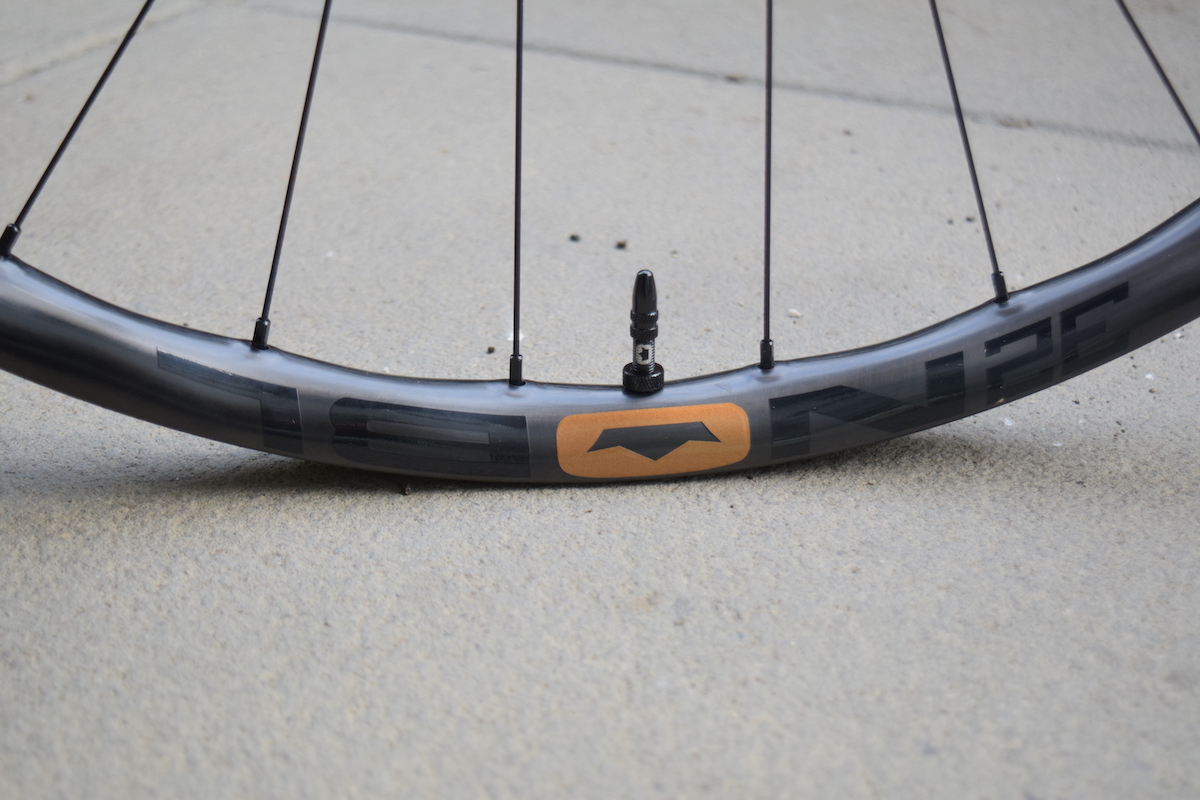 The warranty game for carbon fibre rims is getting competitive. NOBL includes a full lifetime warranty for the original purchaser, including 50 per cent off replacement in non-riding related circumstances (say, melting your rims with your truck’s exhaust, or accidentally driving into your garage with your bike on the roof). It’s a reasonable balance of taking responsibility for design and … still having your customer’s backs when they make mistakes. Questions? Read the full details of NOBL’s warranty.

Cross country-worthy weight and trail toughness are a tricky combo, but NOBL appears to nail it with the TR32. With years of riding around B.C., shouldn’t be surprising that NOBL’s nailed this particular combo. With Vedder Mountain in the brand’s back yard, these wheels surely saw some abuse during the testing phase.

The ride quality is great, and the TR32’s are easily light enough to race XC. They’re still tough enough to spread out to marathons, stage races and everyday trail riding, too. At $1,850 including a lifetime warranty, and with build options down to $1,425 with different hubs, NOBL offers some serious value as well. Carbon hoops are never cheap, but there are definitely pricier options.

NOBL TR32 come in 29″ diameter, 28-hole only. They’re available through NOBL, with a wide range of colour and hub options.