Just before the lockdowns this past January, Ontario cyclists Tiago Varella-Cid and Jonathan Amantea rode Simcoe County Loop. It was an enjoyable experience for both, but it prompted Varella-Cid to consider what other rides in the area would offer a challenge.

“Riding around Lake Simcoe on roads is something of an annual ride each summer,” he says, “but a winter one would be pretty cool too. That got me thinking about riding on the ice.”

Varella-Cid, who says he is “fond of adventures and epic rides,” started planning what he calls the Lake Simcoe Icecapade.

RELATED: Four epic Canadian loops that you need to try

He began by researching ice conditions, and speaking with friends who ice fish on Lake Simcoe. “They offered several suggestions,” says Varella-Cid. “[such as] following the Blue Ice Report on Facebook and checking in with some of the fishing hut operators.”

Having skied across multiple lakes in the past, he knew to wait for a prolonged period of exceptionally cold temperatures. “That was the primary consideration to allow thicker ice and safer travel,” he says. The conditions seemed appropriate by mid-February, but some deep snowfalls would have made riding very difficult—”I held off to allow some of that snow to melt and consolidate,” says Varella-Cid.

The weather wasn’t behaving as he has hoped. “I had just about pulled the plug when warm weather settled in through the second half of February, but kept watching the ice reports and daily weather forecasts for multiple towns around the lake.” While the temperatures were lower, he rode up to Lake Simcoe a few times just to take note of the snow pack—it was steadily diminishing.

Just when it looked like there wasn’t much hope for the ride, an extended cold snap hit in early March. “The ice report generally had ice about 13 inches thick at the minimum but over two feet in some areas,” says Varella-Cid. “I called Jonathon to see if he could join me on Monday before the thaw.”

Varella-Cid set out on Lake Simcoe for a test ride with his fat bike and studded tires the weekend before the ride itself. He started from Holmes Bay, the planned departure point for the big ride. He wanted to see the area they’d leave from in daylight, as they planned to set off before the sunrise.

“At first, riding on the ice was a bit unnerving,” he says, “but I rode out to the ice huts and chatted with a fisherman who noted that a 2500 truck had also driven out, so my weight wasn’t an issue.”

The fisherman pointed out that in the 1990s they used to have tractor trailer races on the ice. “Probably won’t happen anymore with global warming, but you’ll be fine to bike as long as you stay away form any open water or large cracks,” he told Varella-Cid.

Another friendly piece of advice he received from “a wise old soul who I know up north,” was a suggestion to wear a life jacket. They cyclists also packed throw ropes, emergency bivys and spare clothes just in case.

A loop around the lake

On Monday, Mar.8, at 6:30 a.m., Varella-Cid and Amantea set out for the ride. The forecast was a chilly -13 degrees in the morning but the riders could expect highs around six degrees in the afternoon—Varella-Cid said he couldn’t have asked for better conditions. 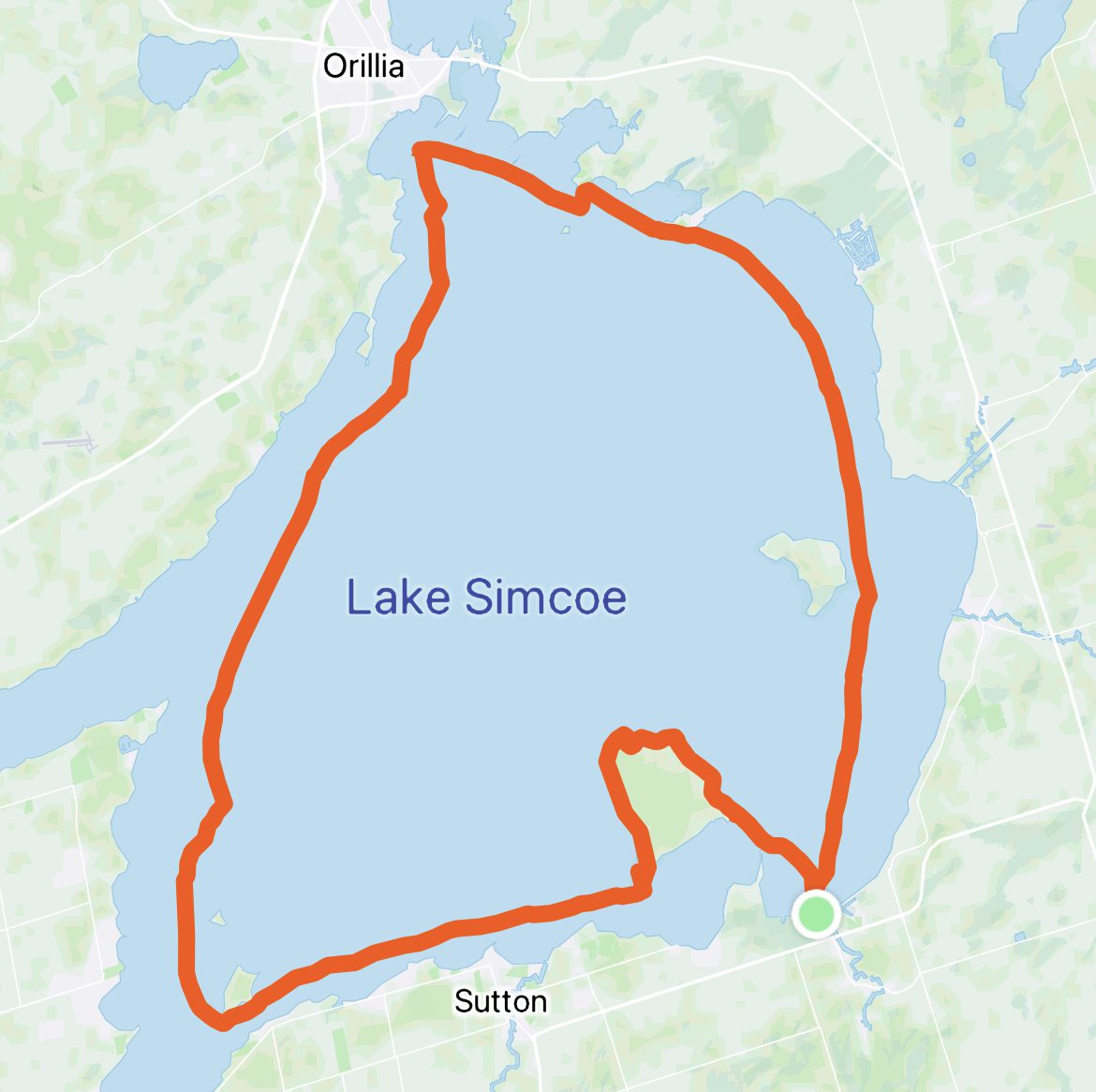 Setting out from Holmes Point, the cyclists followed a GPS route Varella-Cid had created Northwest to Georgina Island. “[We] went around most of [the island] before venturing back out on the ice,” says Varella-Cid. “The GPS route was essential as once you’re farther out it can be a bit disorienting.”

The route took the riders in a loop, that stayed well away from the shoreline where drainages, currents, pump jets and other factors can lead to thinner ice.

“The conditions on the lake were pretty wild,” says Varella-Cid. “The winds were incessant without any cover and we’d hear the ice cracking from time to time.” On the southern half of the lake the cyclists found no significant snow cover, and encountered dark dense ice that he says was still a bit slippery—even with over 300 larger concave tungsten carbide studs in his 45Nrth Wrathlordes. They made no sudden turns on that segment.

Once in a while the pair would come across larger pressure cracks, and would deviate from their path to seek the smoothest crossing, which usually presented itself in the form of a snowmobile track. Varella-Cid said that there seemed to be an endless amount of snowmobile tracks.

“Even with a high of seven degrees it never felt that warm and none of the ice melted,” says Varella-Cid. “Without any shelter we minimized breaks, but stopped occasionally to navigate or lose a layer as the temperature went up.”

“We had hot drinks in insulated containers, which was essential,” says Varella-Cid. “I had a banana and when I went to peel it the skin broke since it had frozen.” Though they had considered going into Barrie or Orillia if they needed food or drinks, the cyclists found they packed enough nutrition to sustain themselves for the day.

A tailwind helped them make good time as they rode North from the upper end of Cooks Bay towards Barrie and Orillia. “We knew in advance that we’d come across a larger crack with open water after Orillia,” he says, “so we took that in stride and went around it. Interestingly, the northern half of the lake wasn’t bare ice and had some crusty hard snow cover about an inch thick.”

The snow cover, combined with a headwind that was steadily increasing in the afternoon, made for a more challenging finish to the ride. 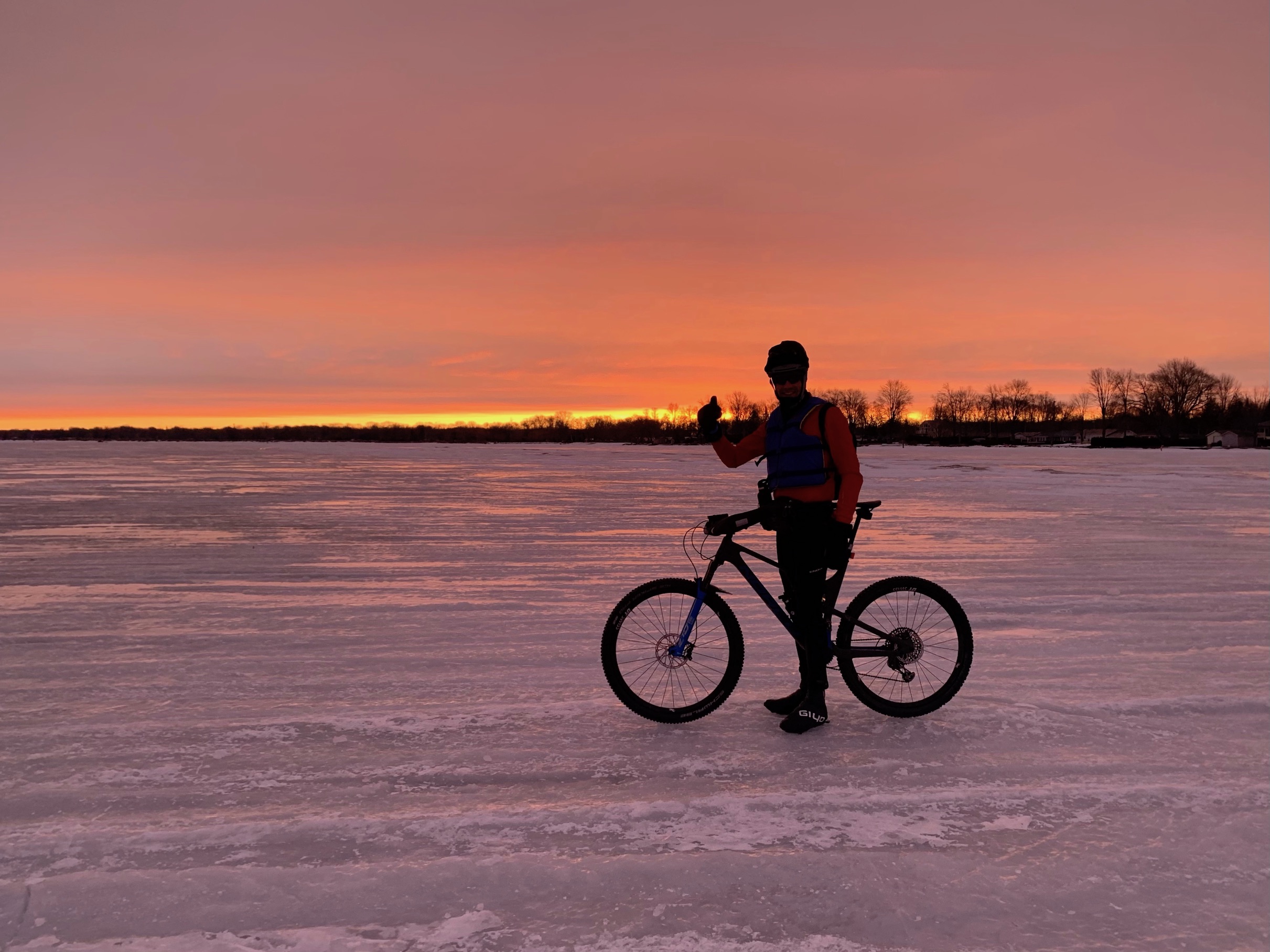 Near the end, Varella-Cid and Amantea stopped on a peninsula and used the land as wind shelter to take a break and eat before pushing on to the last 35 km of the ride. In total, the ride was 105km over about six and a half hours of riding. “It was one of the harder centuries I’ve ridden, but so worth it,” says Varella-Cid. He describes the ride as, “the icing on the cake for an excellent winter of fat biking.”