AirTags, Apple’s latest device, are little round circles designed to help Apple users locate their misplaced or lost items. Similar in concept to Tile, one AirTag is $39 and a four-pack is $140.

The device, in principle, seems like a great way to find a lost or stolen item. As cyclists, when we heard about the new release, we immediately thought of attaching one to a bike. Would an Apple user be able to track down a stolen bike using only the information from an AirTag? We hid one of the new tracking devices on a commuter bike and had a volunteer “steal” the bike to see if we could find it. 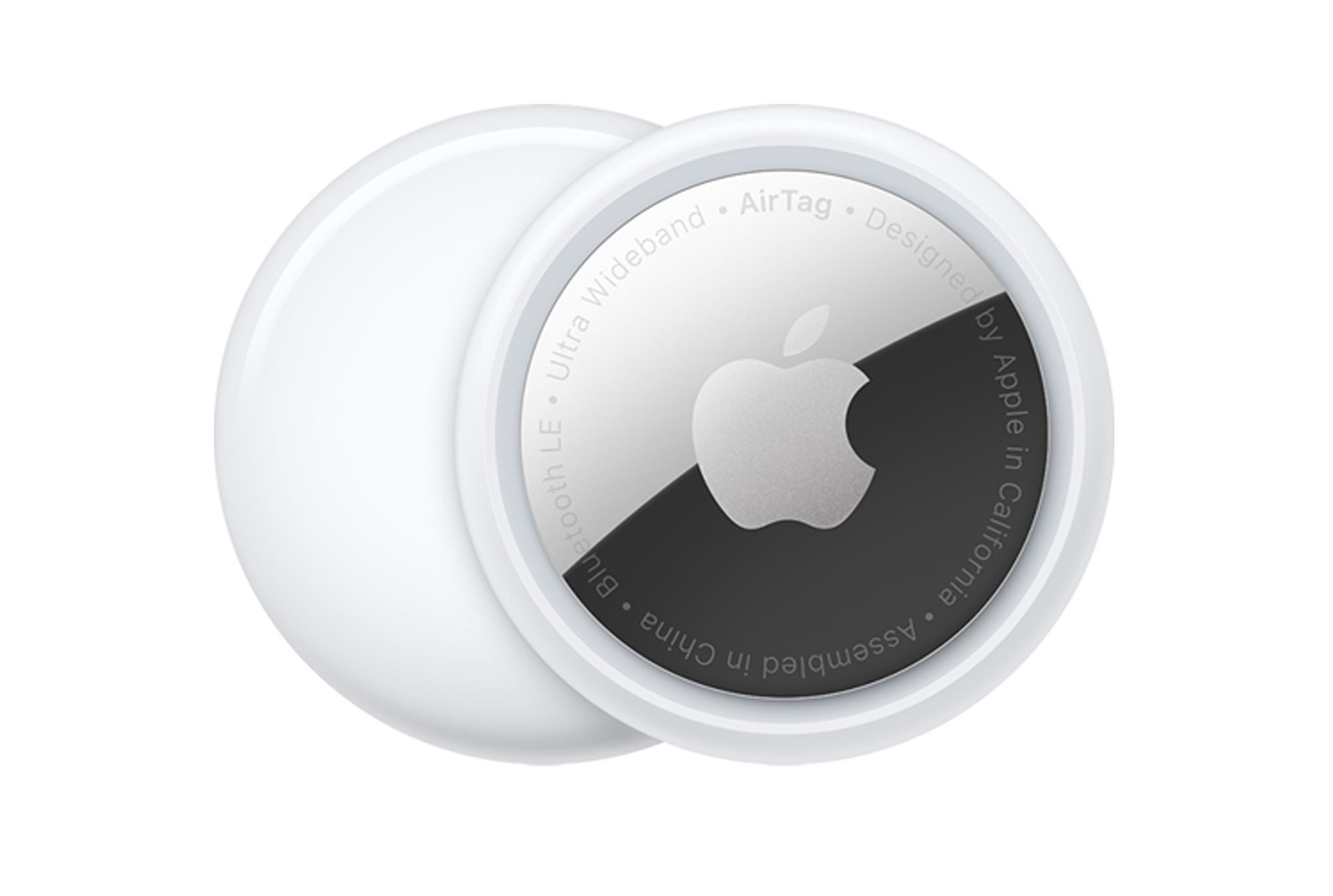 There are some pretty important limitations to this experiment that we were aware of from the start. Firstly, when an AirTag (which is only compatible with Apple devices) is out of range of a user’s phone, it relies on other Apple devices to ping its location in the ‘Find My Network.’ Essentially, using an anonymized and encrypted process, iPhones near the AirTag will detect the Bluetooth signal from the tag and update its location data on the owner’s ‘Find My’ app. The AirTag isn’t constantly sharing location, which allows it to have such a long battery life (12 months), but it also means that you’re relying on the presence of others to find its location.

RELATED: Bike thefts are increasing in Canada: Here’s what you can do to protect your bike

In a city, where bikes are most frequently stolen, more of the 100 million iOS devices said to be in use worldwide by now will be able to ping the tag,

There are a few other limitations to using an AirTag on a bike. The devices are designed to discourage unwanted tracking, so, if someone else’s AirTag is hidden in a purse (or on a bike) the tag will notice it’s travelling with someone else and send them an alert on their iPhone. If the thief has an android you have a bit more time to locate the bike, but eventually, the tag will start playing a sound to make others aware of its presence. This feature is only set off once the tag is separated from the owner.

If the bike thief has an iPhone, they’ll be notified of the AirTags presence once they return home or to a frequently visited address, so the window of recovery is very narrow (though the bike owner will know the final location of the tag before it was removed.) If there are no iPhones around, an AirTag away from its owner for three days will play a sound each time it’s moved to alert its presence.

Disclaimer: We do not encourage cyclists to retrieve a stolen bike alone. If you are aware of the location of your stolen bike, contact the authorities.

Setting up the AirTag

Getting an AirTag ready to go is an incredibly simple process. Once I removed the plastic tab to ‘activate’ the tag, I unlocked my phone and it asked me to name the AirTag—bike was a pre-listed option.

Putting the AirTag on the bike itself was a bit more of an issue. Some people have suggested using tape or velcro to attach it to the bottom of the saddle. I had hoped the AirTag would fit in a seattube, but, with a diameter of 3.2cm, it’s a bit too wide. 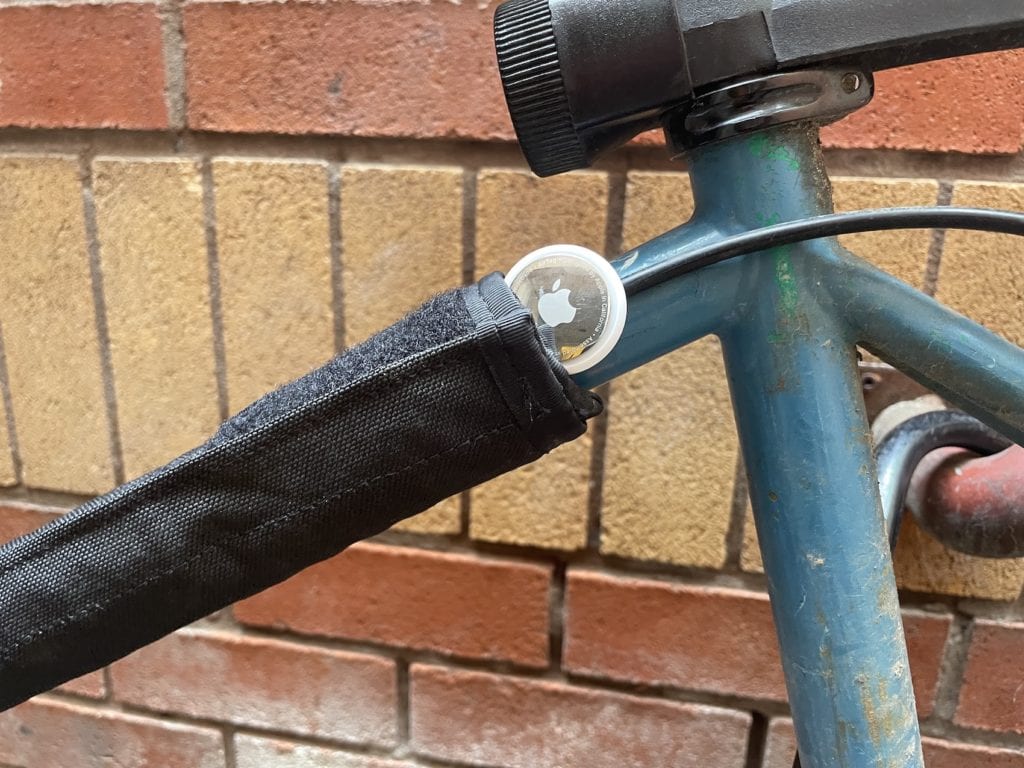 While the AirTag was nicely hidden in the top tube cover, a more permanent solution would be required for long-term use 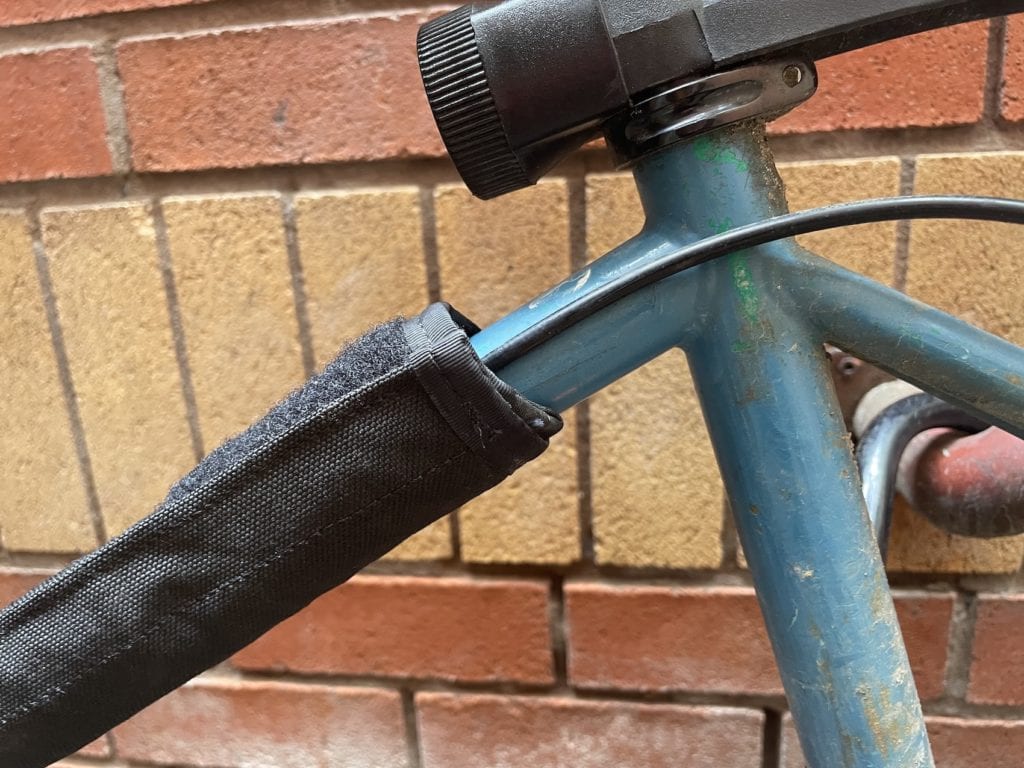 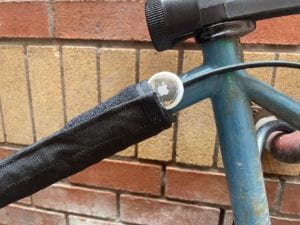 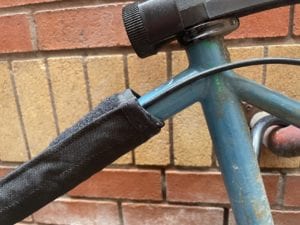 With the device installed, the volunteer bike thief set off on Toronto’s Queen st. West with the secretly tagged bike.

I waited five minutes before opening the ‘Find My’ app and looking for the AirTag, which had named itself “Lily’s Bike.” Initially the tag didn’t move, but once the thief hit a light at an intersection the bike’s symbol jumped to life on the map. Apple gives users the option to put an AirTag in ‘Lost Mode’, which would notify a nearby iPhone that they have a lost item. In this case, I didn’t want the bike theif to know I was tracking him, so I didn’t activate Lost Mode.

I started following the stolen bike (on another bike, which may be cheating a bit) and kept an eye on the bike symbol as it jumped across my Find My map. I was surprised with the speed that the location updated, but, even on a rainy day, the area the thief was riding in was dense with people. As he rode through Trinity Bellwoods park I could quickly trace his movement and, knowing that this particular bike theif had mentioned he wanted a Slurpee (also probably cheating a bit) I had a hunch he was headed for a local 7/11. 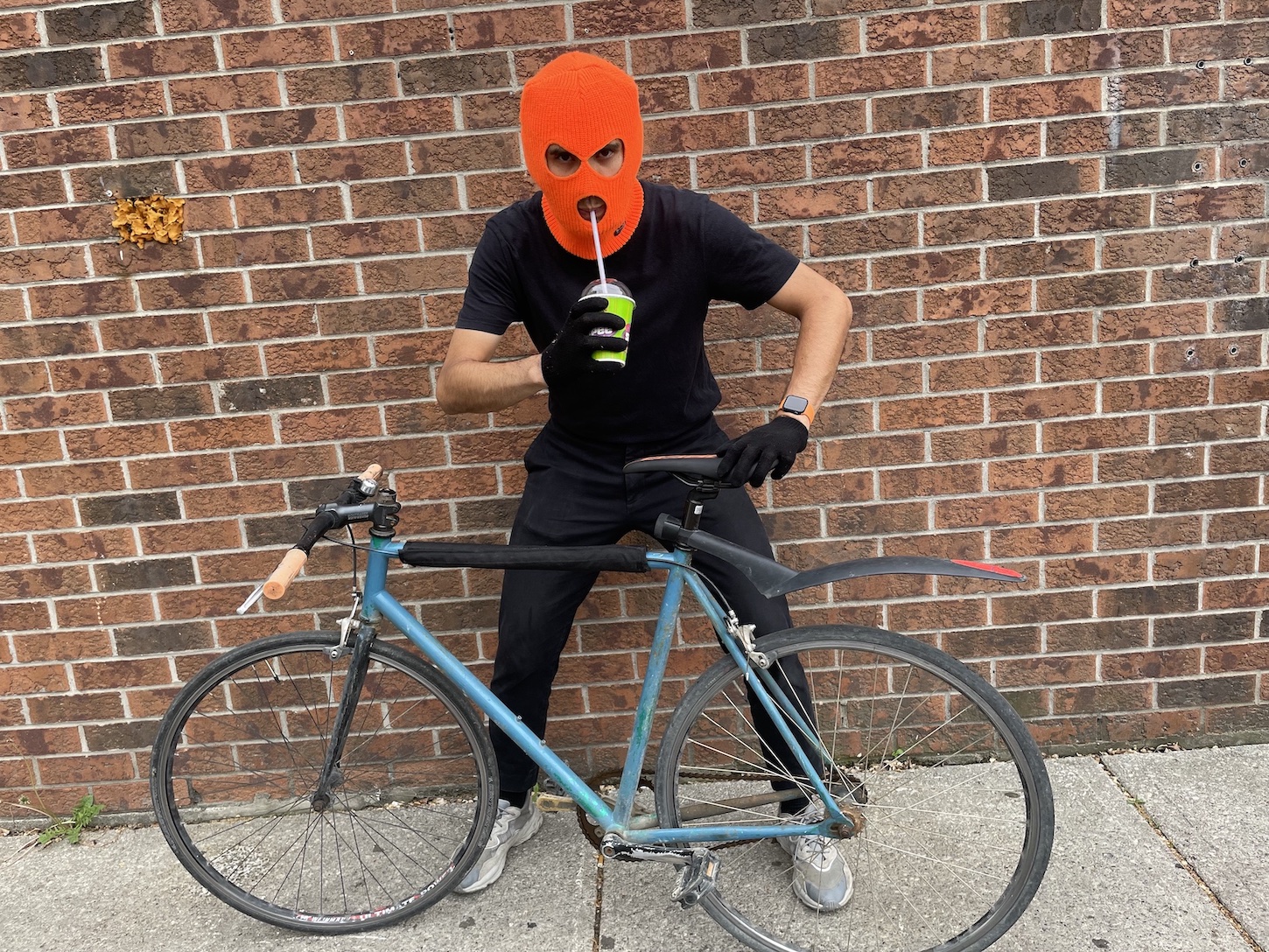 The dot stopped moving and I caught up with the bike thief, who conveniently had a brain freeze and was left defenseless as I reclaimed the bike.

We already do a lot to prevent the theft of our rides, but having this as a possible option for tracking down a stolen bike, particularly if you live, work or park your bike in a densely populated area, could give you an extra advantage.