Bianchi has announced the release of its new E-Omnia ebike collection. The bikes, which the company says were designed to meet the needs of every type of rider, come in three styles: City, touring and mountain bike.

The E-SUV, Bianchi’s flagship electric model, is a full-carbon e-mtb. Fabrizio Scalzotto, CEO of Bianchi, says that the design of the E-Omina stems from the E-SUV, but, while the E-SUV is a top-end e-mtb, he describes the aluminum E-Omnia bikes as: “A bike that is more within everyone’s reach.”

The name of the bike, Omnia, means “everything” in Latin. Bianchi says it was named to represent the fact that the three E-Omnia bike variants have something for everyone.

All three versions of the bike have integrated rear headlights that provide 500m of visibility and a front light with a lighting depth of up to 100m. They’re built with a 250W Bosch performance line CX motor unit which runs 500 or 625 watt-hours and provides 85nm of torque with up to 340 per cent user support. Beyond those similarities, the three bike models vary in their uses, features and customizable options. 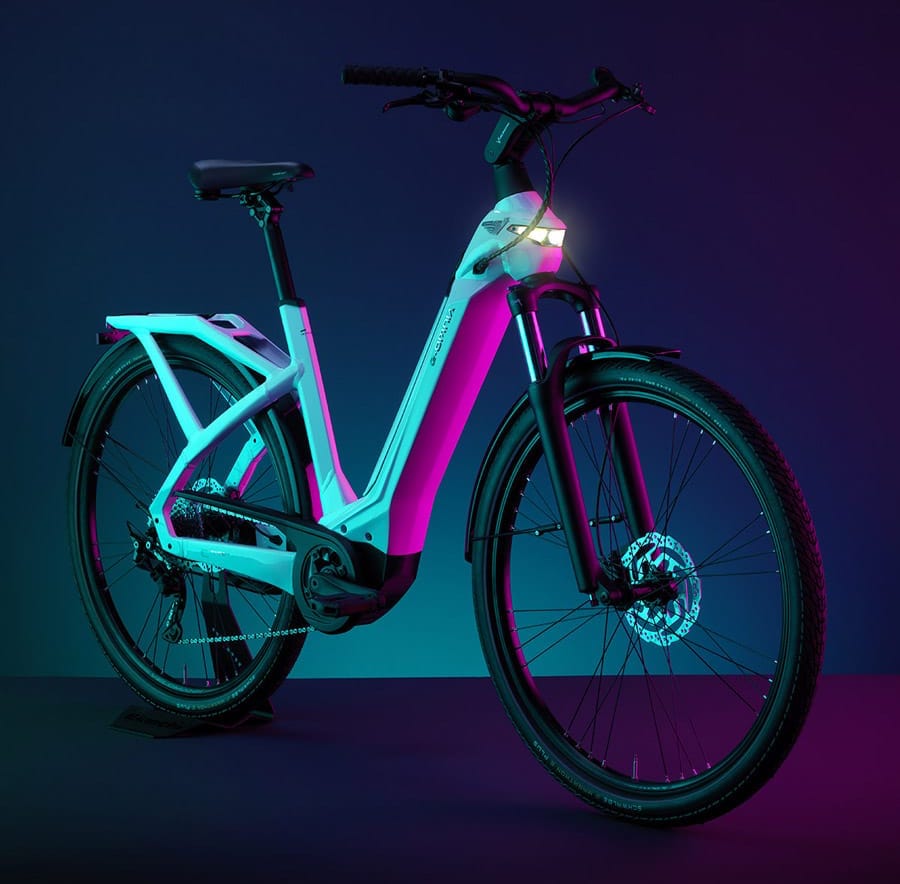 The C Type E-Omnia is the line’s city bike, which Bianchi says is a mountain bike transformed into a commuter. Designed for road rides, the walk-though frame has an integrated rear carrier designed to accommodate panniers and a child seat. The C Type E-Omnia can last up to 110km and can be built with an optional integrated automatic braking system for enhanced safety. It comes in a white or black colourway. 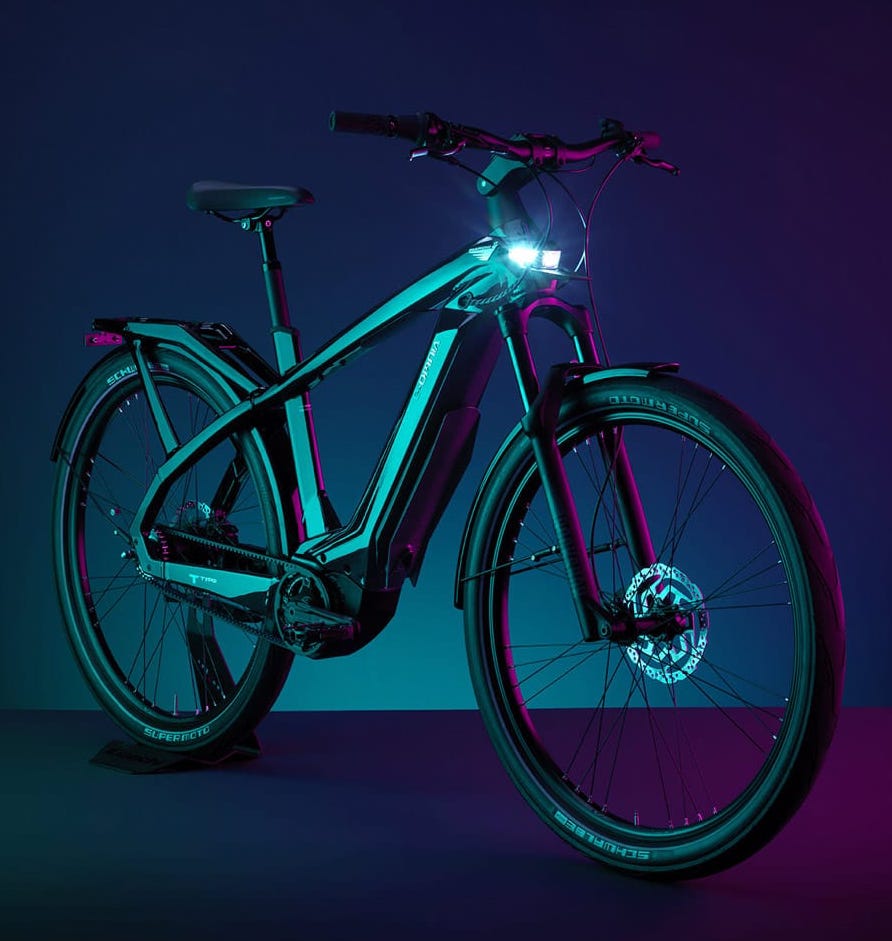 The T Type E-Omnia is Bianchi’s touring e-bike. Between a city bike and a mountain bike, it’s designed to handle gravel and city rides. The bike comes in unnecessarily gendered “man” and “woman” styles, with a difference in top tube slope. The T Type is built with front suspension, whereas the FT Type is full-suspension for more comfort on rougher roads. Like the C Type E-Omnia, the T Type also comes with an integrated rear carrier. Customers have the choice between the chain and belt drive versions of the bike. With the dual battery it can last up to 195km and comes in a white or black colourway. 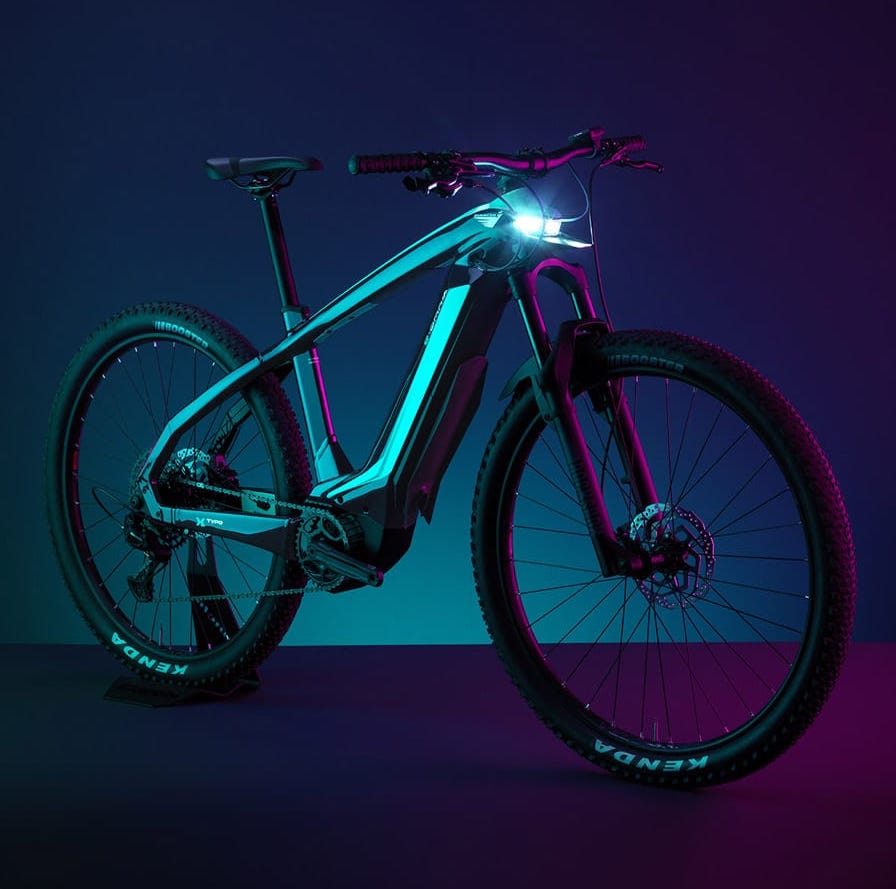 In the E-Omnia line, the hardtail (X Type) and full suspension (FX Type) models are the most closely related to Bianchi’s E-SUV bike.  Designed for exploring backwoods and steep climbs, the bikes are built with 29″ wheels, integrated mudguards and will run up to 142km with a dual battery. The X Type and FX Type E-Omnia come in black with celeste or orange detailing.

Bianchi’s website has a customization section where customers can select various upgrades and model features such as splash guards, panniers, non-standard colourways, saddles and more.