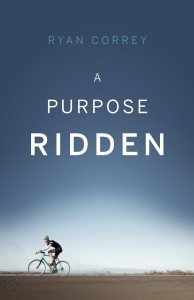 It’s a story of family tragedy, of friends made and friendships wasted, of determination beyond all odds and of success and failure. But most of all, A Purpose Ridden, is a story about bicycles, and how one man has made it his life’s work to change the world one pedal stroke at a time.

A talented youth hockey player with Olympic aspirations, Ryan Correy was 13 years old when his dad took him on a 3,400-km bicycle trip from his hometown of Calgary to visit family in Ontario. His father called it “manhood training.” What it turned out to be was life-changing.

Nine years later, Correy had transformed himself from hockey prospect to extreme athlete. He was more than 20,000 km into a ride spanning the Pan American Highway from Alaska to Argentina. When Correy and his crew chief crossed into Peru, some questionable police officers tried to shake them down for money. Tired of it happening over and over, the two ran. It was just another day on the job.

Correy kept journals of his long-distance exploits throughout the years. The result is a diary-style memoir of some mind-blowing feats. The author doesn’t shy away from self-examination in A Purpose Ridden, freely and openly talking about sensitive issues, such as his suicidal thoughts, the pressure put on him by a successful, business- oriented family and his early failures in trying to use his cycling to raise money for charity.

The 479-page book is hard to put down. Correy’s honest writing style caused some tension within his family, and one can understand why. This is a book as much about family dynamics as it is about cycling. Fortunately, the two storylines weave together seamlessly to create a must-read book for anyone.