The Oakley Eyeshade, which was made famous by Greg LeMond when we wore the glasses to a Tour de France win, turns 30 this year.

Oakley was founded by Jim Jannard in the mid-70s. The company’s namesake is Jannard’s dog. The founder’s fundamental philosophy is that everything can be made better. Jannard began with injection-moulded motocross grips and eventually moved to eyewear technology, giving birth to an entire sports category: performance eyewear.

Recently, Oakley opened its doors to the media to celebrate its legacy and culture. It also showed some of the new technologies it’s set to release, such as enhanced vision, digital eyewear and customization. Many of its athletes were on hand, including three-time Tour de France winner Greg LeMond. I had a chance to sit down with LeMond to talk about cycling in the 80s, his relationship with Oakley and the iconic Eyeshade. It turns out, the Eyeshade was quite polarizing, if you will, when it made its appearance in the pro peloton.

Oakley has released a Heritage Collection of eyewear this year, which includes the Eyeshade (starting at $230). 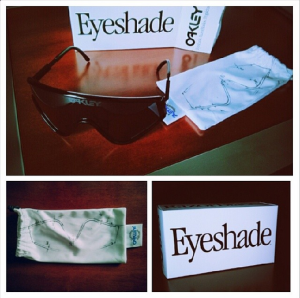