Forty-six days ago, Matthew Cuesta gave himself a simple personal challenge: ride 46 km (or run 4.6 km) every day for 46 days. George Floyd was murdered at age 46 by a Minneapolis police officer—Cuesta wanted to honour Floyd’s memory. The Toronto cyclist hoped that his rides would spark uncomfortable conversations about race, police brutality and racism in the cycling community and beyond.

RELATED: This cyclist is riding 46 km every day for 46 days to honour the memory of George Floyd

For his first ride Cuesta, rode by himself. He got home and posted on Strava and Instagram using #46forGeorge as a hashtag. He never expected his rides to get the attention they did.

The Canadian National Exhibition (CNE) loop, a 2.5-km route in downtown Toronto, was closed off to cars for Cuesta’s last day. It’s hard to estimate just how many cyclists came out to ride in solidarity with him. The road was saturated with a continuous stream of more than 100 cyclists—riders on hybrids, road cyclists, a family with a speedy seven-year-old, mountain bikers and any other type of bike you can think of looped around the CNE together. Everyone gave each other space and almost all the riders wore masks or buffs to cover their faces. 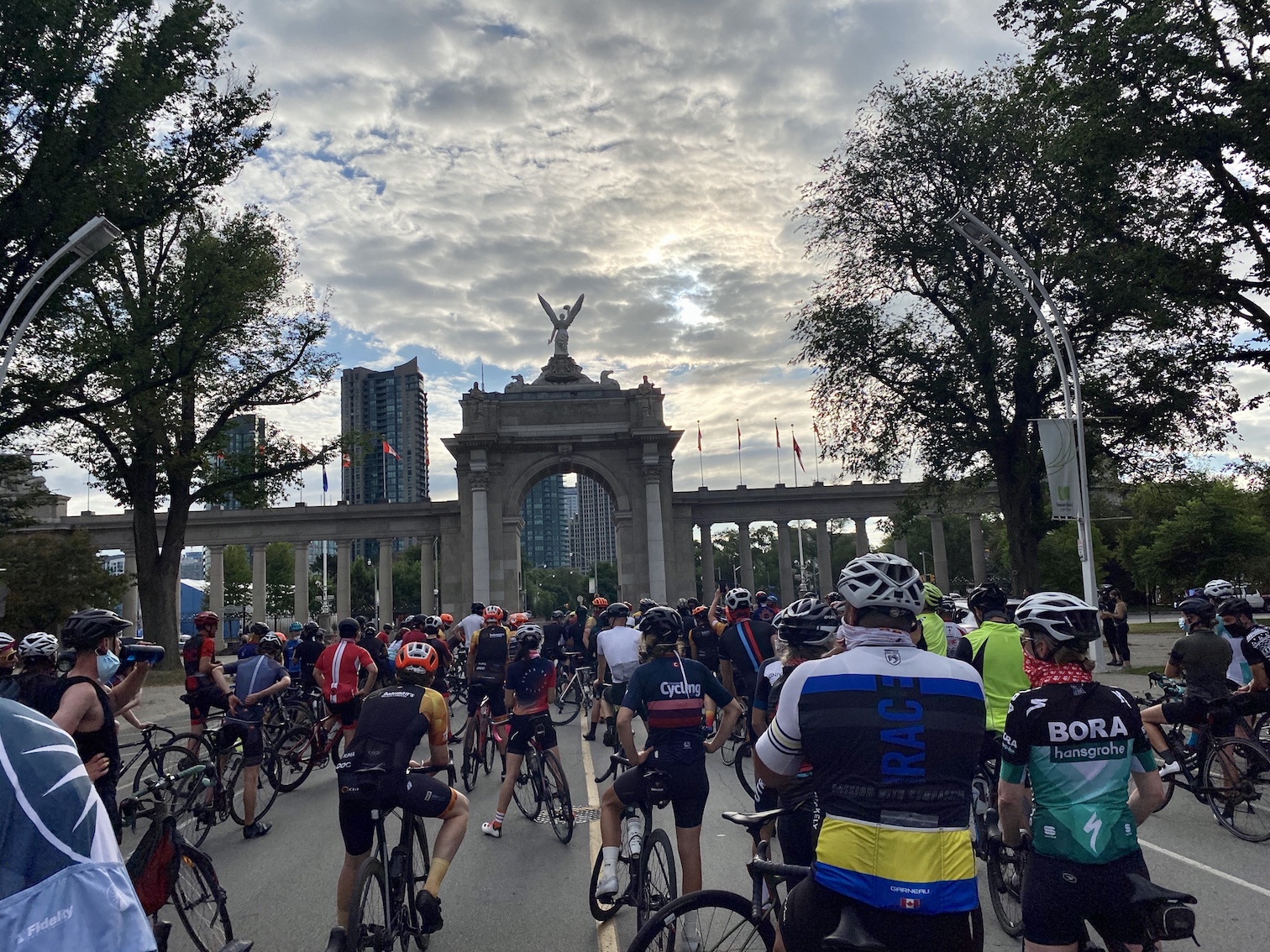 “I don’t even know how many people came,” says Cuesta, who spent the morning riding and periodically speaking with a collection of media, local cyclists and friends who came to support him. “I’m feeling overwhelmed with joy.”

Like many others who joined Cuesta on his rides, Melissa Doldron heard about 46forGeorge through a friend on Instagram. “It went viral,” she says, standing with her bike in front of the CNE’s Princess Gates. “It’s an amazing thing that everyone wants to feel that they’ve touched.”

For her, seeing Cuesta push himself physically and mentally has been inspiring. “It’s an idea born out of frustration,” she says “He wanted to see something better come out of the events we’ve seen in the last couple of months.” 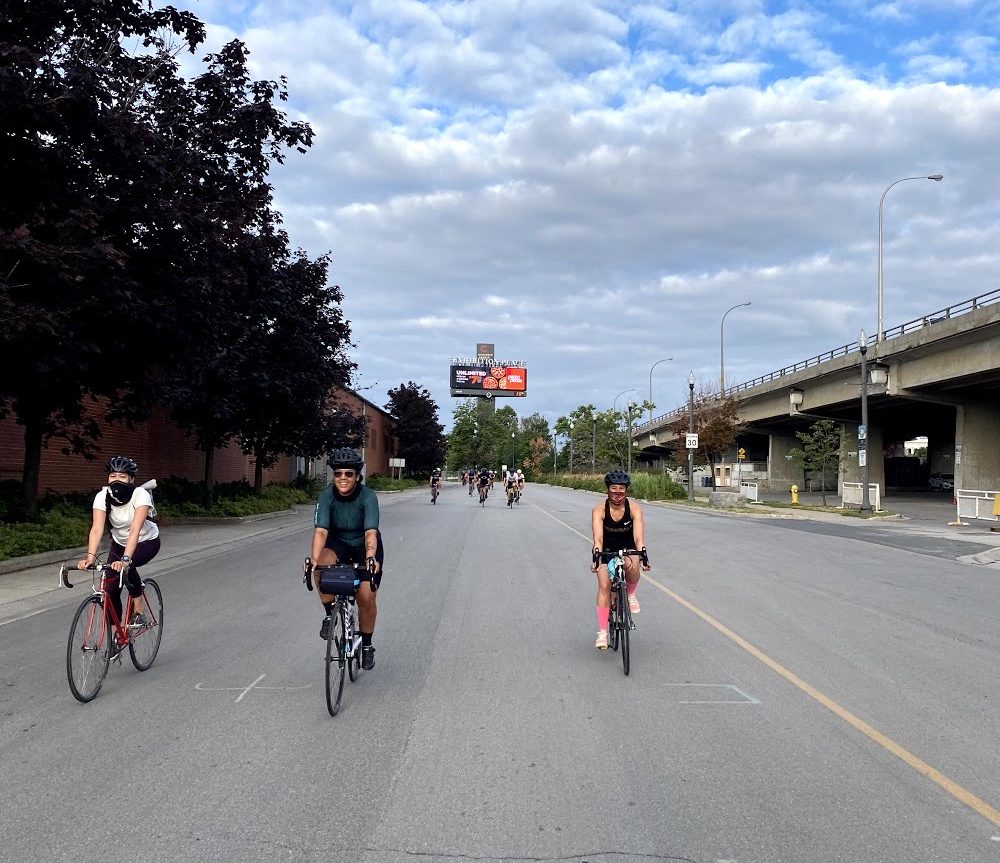 Doldron, who rides a road bike and has a running background, thinks that this is an important conversation to have—particularly in these sports communities. “In the mainstream media cycling always looks like a rich white sport,” she says. “There are a bunch of barriers and accessibility issues—in road cycling especially. We need more moments like this. There are people from all ethnicities, backgrounds and socioeconomic levels that love cycling—[people] need to see themselves portrayed more in the media.” She says it works like a domino effect: Once people start to see more familiar faces or just others that look like them on bikes, they’ll be much more inclined to get into the sport themselves.

Chris McGarrell echoes Doldron’s sentiment on the importance of the #46forGeorge movement. “It’s not a secret that cycling is perceived as a ‘white thing’,” says McGarrell, “so to come out here and see all these people from different races, different backgrounds, different ages and skill levels riding their bikes to support Matthew is beautiful.”

“This moment is forcing important conversations we normally wouldn’t be having,” says McGarrell. He says it feels surreal for him to be riding and making connections with people he would have never met before, particularly because just one month ago he didn’t even own a bike.

When McGarrell got his bike he decided to go for a ride with a few friends. Much like the #46forGeorge movement, in just a short period of time what started off as a small group exploring Toronto’s bike paths grew into a diverse and inclusive community of more than 60 cyclists. A number of McGarrell’s group, Man Dem CC, have come out to ride with Cuesta and were there to support him on his last day. Other local clubs and teams such as The Lantern Rouge, Toronto Hustle, Bateman’s and Les Domestiques also had a presence at the CNE.

A lot of ppl DM and express their interest in joining #ManDemCC for a ride, but then follow up with a statement filled with doubts. “This looks so cool BUT my bike isn’t as nice as yours”. “Yooo this looks so fun BUT I’m really slow” None of that matters. I present to you the man in the photos above, my guy Curvy B. Don’t ask what the B stands for because I don’t know. That’s just his name. • In the first pic, Curvy B is seen enjoying some water on our first ride a month ago. What this pic doesn’t show you is that he had leg cramps and was moaning like a wounded goat. However, in the second pic a few weeks later, Curvy B rode his bike from Woodbine Beach to Lakeshore West and then back home to Scarborough (BOM BOM BOM). His confidence on a bike is literally night and day. • Don’t let your mind put limitations on you that don’t exist. Get your ass on the seat and let’s gooo! • #ManDemCC #RollWithTheManDem #TheRighteousWay #ActiveTO #TorontoCycling #BikesAreFun #Cycling

Cuesta isn’t the only cyclist riding 46 km for 46 days. Others, such as Roland and Sandra Fletcher, are also riding #46forGeorge. The couple met Cuesta on his fifth day and decided to take on the challenge themselves. Now on their 42nd consecutive day of riding, they both say they’re feeling pretty good. Roland is a bit achey, and Sandra had a recent fall, which resulted in some road rash, but both say it’s worth the aches and pains to get the message across.

The rides have sparked many conversations about racism and police brutality. “A lot of people have reached out,” says Roland.”It’s been effective in bringing awareness to people who hadn’t considered the issue as strongly as others had.”

Members of their club, Morning Glory (the largest club in Toronto), will join the Fletchers on their last ride.

“Often these issues get lost in the news cycle after a week or so but to see it every day for a month and a half really sends a message home,” says Roland. “It gets people thinking about it and talking about it a little more.”

Eight days ago the couple’s friend Joanne Kurys began daily rides of 46km to honour George Floyd. “Matt finishes today,” says Roland, “we still have some days to go, Joanne is on day eight, and so on. It’s keeping that conversation going a little bit longer so that change can really happen.” 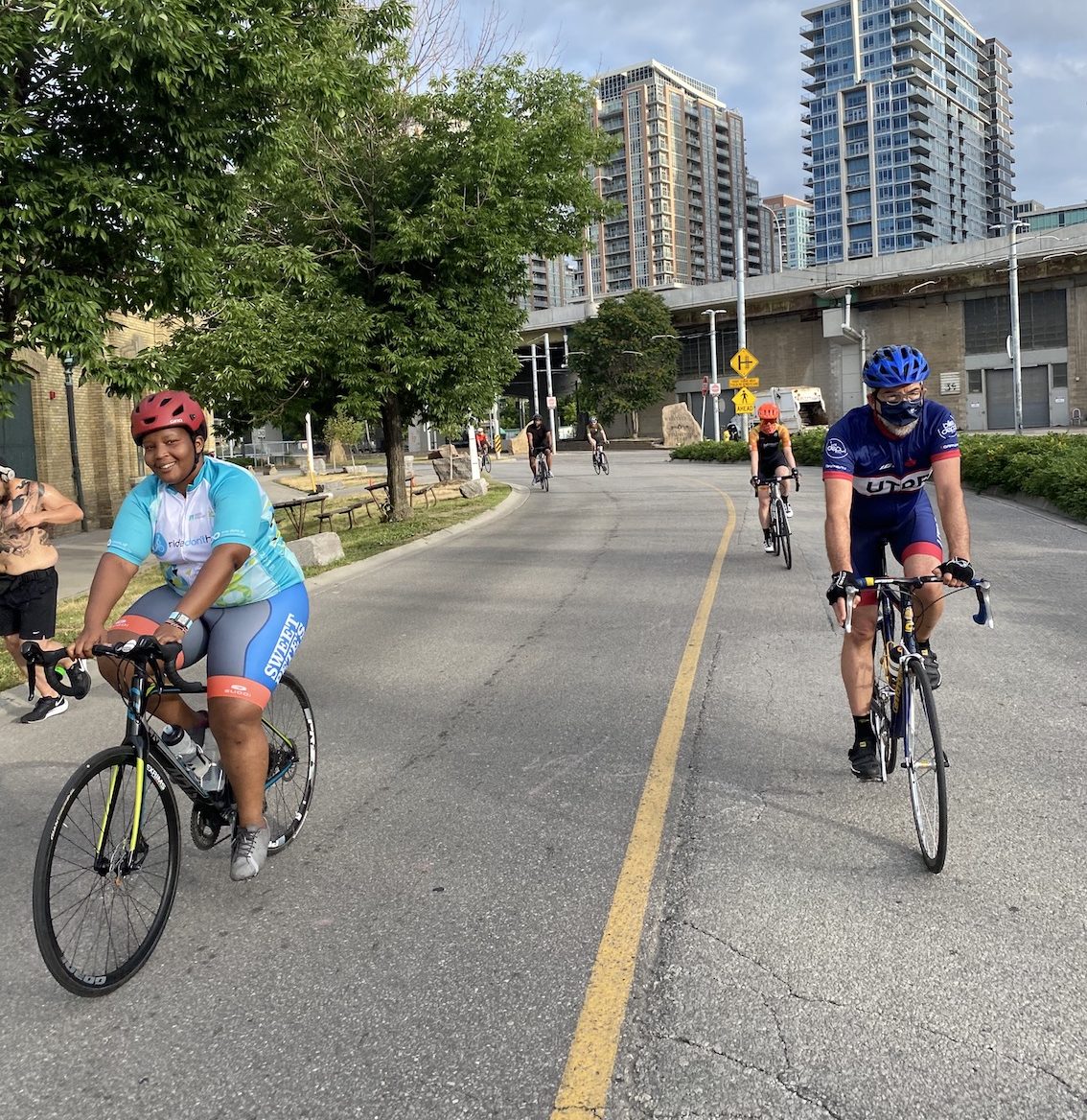 The conversation has reached a significant number of people. Brad Bradford, cyclist and Toronto city councillor, joined for a few rides, as did members of the Toronto Police force. Cuesta had the opportunity to speak with them about his lived experiences and important changes that must be made.

“People are reflecting and challenging themselves,” says Cuesta. “It’s 100 per cent working.”

He plans to take a break—a moment to reflect—before he jumps back into things. Ultimately, he hopes to turn 46forGeorge into a foundation. “The Man Dem CC have continued the wave and I’m gonna pass the baton to him (McGarrell) for a minute,” says Cuesta, “But I’m going to make sure it doesn’t stop.”

After 46 straight days of riding and hard conversations, it’s no surprise he wants to take a moment to recharge. Although: “I Might do a recovery ride tomorrow,” Cuesta says with a laugh.