Apple is in the midst of its 31st annual Worldwide Developers Conference (WWDC), and the company has just announced some major updates for iOS 14. The changes include tweaks to the new Apple Maps, which was released last year in the U.S. and is now available in Canada. One key update, which design director Meg Frost noted was the “most requested” feature, is the inclusion of cycling directions in Apple Maps.

Although Canadians will get the chance to use some features of the updated Maps application, for now, cycling directions are only available in New York, Los Angeles, the San Francisco Bay Area, Shanghai, Beijing and other cities in China. The company hasn’t yet announced when cyclists in other parts of the world will have access to directions, but Frost says they will add many more cities in the coming months. 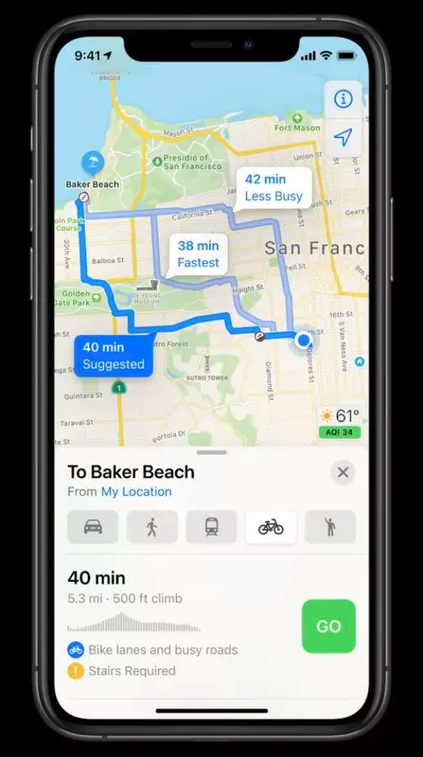 Getting around by bike

The dedicated cycling option will allow user to find bike-friendly lanes, paths and roads. The app also takes elevation into account to let cyclists know what kind of climbs they’ll be facing on their ride.

The new update will tell users whether their route includes quiet or busy roads, and give other options for those who prefer to avoid busy streets. It will also let riders know if there’s a steep climb coming up of if they’ll need to carry their bikes up a set of stairs. Though stairs are more common somewhere like San Francisco than in most Canadian cities, users everywhere will be able chose to avoid them altogether.

Cycling directions will also be available for Apple Watch users, and the update will also be coming to desktop with Big Sur, the latest macOS. Maps users planning out a specific commute at home will be able to send trips from their computer to their iPhone or Apple Watch—allowing them to follow the directions in real time (while hopefully keeping an eye on the road).