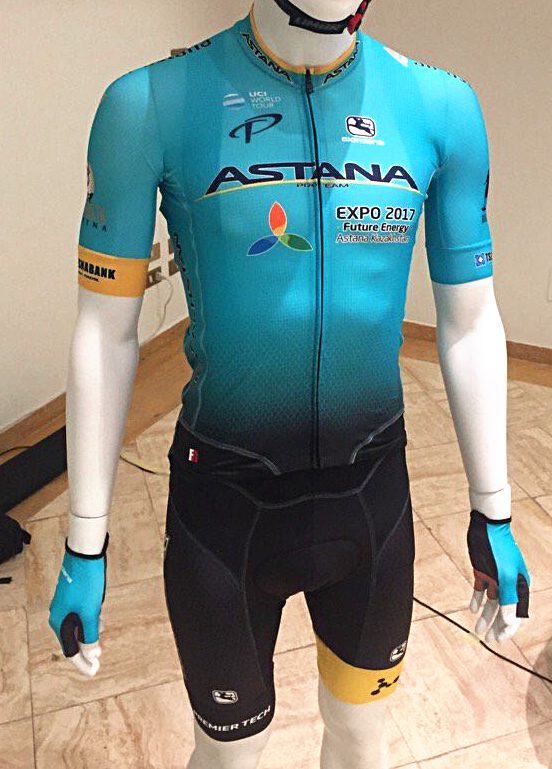 The late-autumn roll out of 2017 WorldTour kits continues, with Astana releasing its new uniform on Wednesday in Montecatini Terme, Italy. The Kazakhstan-registered squad has darkened its kit for next year, getting rid of the sky blue shorts in favour of black. The jersey fades from sky blue to black as it approaches the hem.

The yellow band at the collar has also been employed at the right sleeve and the left cuff of the shorts.

“We are thrilled to be involved with Astana,” said Giorgio Andretta, founder of Giordana. “It marks our return to the WorldTour. We have developed an entirely new line of garments to help the athletes perform at their best. Our new FormaRed-Carbon Pro (FR-C Pro) line will make up the core of the kits we supply the team. This new, top-of-the-line collection offers a diverse range of garments for racing and training. Our goal with FR-C Pro was to set the bar high in regards to innovation and performance to handle any riding condition throughout the year. Clubs, teams and shops throughout the world can personalize this same product through our 2017 custom clothing program. Moving forward, we will continue to evolve the Giordana range with the feedback we garner from partnering with this great team.”

In the past, Giordana has worked with teams, such as Motorola, CSC, ONCE and Cofidis. In 2017, the company will continue its sponsorship of Canadian continental squad Silber Pro Cycling.

The new look of AstanaProTeam for 2017 with @GiordanaCycling What is your opinion? We like it so much! pic.twitter.com/mmMrI8dm11

Astana also revealed its new Argon 18 bikes. The Canadian company jumps up to the WorldTour after two years of supplying Pro Continental squad Bora-Argon 18. The renamed Bora-Hansgrohe, seemingly a cinch to make the WorldTour with Peter Sagan in its line-up, will ride Specialized, Astana’s old supplier.

FDJ also showed off its 2017 uniform this week. It looks a lot like 2016’s ensemble, down to the white shorts.