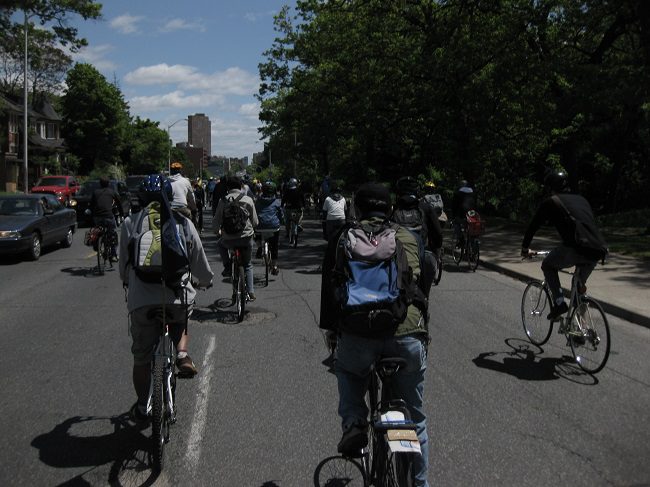 For years, the idea of bike lanes on Bloor Street, one of the longest east-west strips through the city of Toronto, has been little more than a fervently-shouted rallying cry. “Bike lanes on Bloor!” riders chant during Critical Mass events, or during the annual Bells on Bloor ride, taking cyclists east along the usually busy, congested route.

According to this weekend’s news, though, the concept of bike lanes on Bloor is about to become a good deal more substantial.

On Nov. 28, it was announced that Toronto is kicking off a pilot project to bring bike lanes to Bloor Street, running between Shaw Street in the west and Avenue Road in the east. It’s a pilot project, slated to last for twelve months, in which the city will be able to explore in depth the benefits of such bike infrastructure in a busy, teeming stretch of the city. According to at least one local business, CityNews reports, that benefit is already apparent.

“We’re expecting a tonne of bike traffic,” said Matthew Languay, whose business, Basecamp Climbing, is scheduled to open in December at 677 Bloor Street West. Anticipating what that bike traffic could mean for his operation, Languay has ordered extra bike bars at the address, and is reportedly working with the city to install more ring-and-post bike stations out front to accommodate the numbers. “That’s what we’re pushing for,” he added. “More transit, less cars, and more bicycle traffic.”

In terms of the benefit of bike infrastructure for local businesses, Joe Cressy, a local city councillor, agrees.

“What research has shown us,” he said, “is that in downtown environments—when you put in bike lanes—it enhances the local businesses.” Local businesses, Cressy added, are working on an economic impact study to accurately gauge the numbers, but already the plan is seen as a boost in the sense that it brings more foot-oriented, human-powered traffic to area businesses.

The pilot project officially begins in 2016, and public meetings, reportedly, will be facilitated to discuss the various design options. The first such meeting happens at Toronto’s Trinity-St .Paul’s United Church on December 2, when the public will be encouraged to provide feedback regarding the plan.