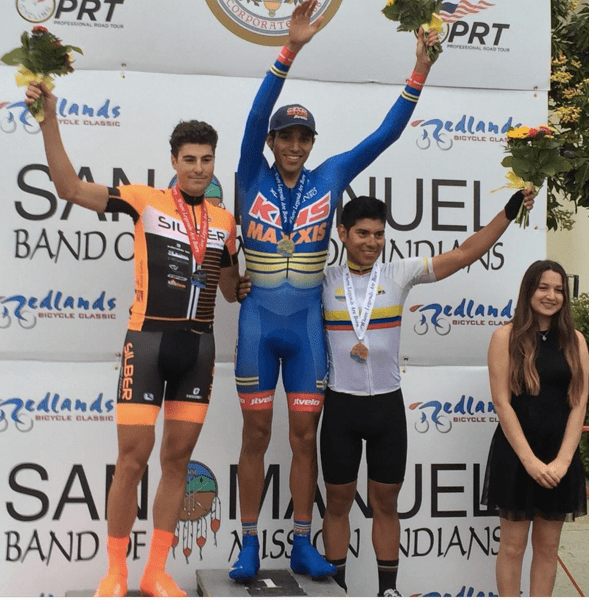 Silber Pro Cycling took another podium at the Redlands Classic in the Stage 4 criterium as Elliot Doyle avoided a late race pile-up. Ulises Castello (KHS-Maxxis-JL Velo) avoided the crash by coming around the corner first and had a clear run to the finish. Doyle had to swerve towards the barriers managing to narrowly avoid his falling teammate and sprinted to second while Michael Le Rossignol (Silber) finishing fourth.

Coming into the final right-hand corner of the elite men’s 90-minute crit, Silber were well positioned at the front of the peloton. Castillo entered the corner first with Dahl glued to his wheel. As the designated sprinter for Silber, Doyle was perfectly positioned. However the race plan unraveled when Dahl clipped a pedal in the corner and his rear-wheel lost traction bringing the Silber rider down. Travis McCabe (Holowesko-Citadel) went head-over-handlebars running into a tumbling Dahl. In the ensuing pile-up, Matteo Dal-Cin (Silber) who sits second overall in the general classification also hit the deck. Dal-Cin narrowed the gap to race leader Javier Acevedo (Jamis-Sutter Home) in the stage 3 time trial to two seconds. Luckily neither Dahl nor Dal-Cin sustained serious injuries in the crash. Dahl sustained bruising to his ankle and is a race-time decision while Dal-Cin injured his hand but will start Stage 5.

The crash and ensuing pile-up was captured in slo-motion by a spectator. Silber go into the final stage of Redlands on Sunday (April 10) looking to race the Sunset circuit aggressively and try to take the lead in the GC.

In the women’s race Alison Jackson of Twenty16-RideBiker sprinted to fifth. Jasmin Glaesser sits fifth in the general classification in the elite women’s field.

19 Big Photos by @veloimages of the Women's and Men's Stage 4 Crits at the Redlands Classic: https://t.co/VOWGDyhLuP pic.twitter.com/eGpyfmMngH