It was a rough, and dramatic night for the Canadians as men’s Keirin kicked off in Tokyo. The event originates in Japan and delivered high drama on its return.

Hugo Barrette battled through re-rides and a heavy crash, but was unable to move through to Sunday’s medal rounds. Nick Wammes went up against world champions, also unable to find his way through.

Hugo Barrette is up first for Canada, in the second heat of the men’s Keirin. The Canadian went straight to the front, tucking in right behind the electric derney. As the derney pulled off, Barrette looked to be in good position, holding a gap to the field and racing from the front. With two laps to go, the Canadian was holding position well. Behind, the race was coming apart.

Jack Carlin and Muhammed Shah Firdaus Sahrom (MAS) came into contact. The Malaysian fell as the two riders moved up the track. Sergey Ponomaryov of Kazakstan was left with nowhere to go, collided with Sahrom and went down hard. The officials gun fired, bringing the race to an end.

After some deliberation, it was decided the race would be restarted without the Kazak or Malaysian rider. Buchli returns to the start, with a warning.

That meant just four riders on the start. Barrette moved to the front again, reprising his tactic from the first running of this heat. As the derney pulled off, Buchli took to the front. As Jack Carlin moved up to the front, disaster for Barrette. The Brit moved down and the Canadian, stuck with overlap, crashed hard. Richardson, the Australian, somehow avoided the fallen rider. The race continued, with Buchli taking the win over Carlin.

Barrette rose slowly from the track to applause from the Japanese audience. A protest was launched, but fans would have to wait for the result. After a long deliberation, Buchli was relegated. That did little for Barrette, though, as Carlin and Richardson advance.

Nick Wammes goes up against champions

Wammes slotted into second behind the derney and Czech Republic’s Babek. As the derney pulled off the Surinam rider started the action, flying up the outside. Wammes was dropped to the back as the pace accelerated into the final lap. Yuta Wakimoto. The 21-year-old heads to the reps for a last chance.

A short while later, Nick Wammes was back on the line for his repechage. It’s a tough go, though, as the Canadian’s up against GBR’s defending champion, Jason Kenny. While Kenny’s been slow to start his Games, the rust has clearly been dusted off. Wammes made his move, only to have Kenny pass under him to take the lead. The highly decorated British sprinter wasn’t slowing down, escaping from the front and easily taking the win. Wammes fought for positions, but his night – and Keirin – ends in the reps. 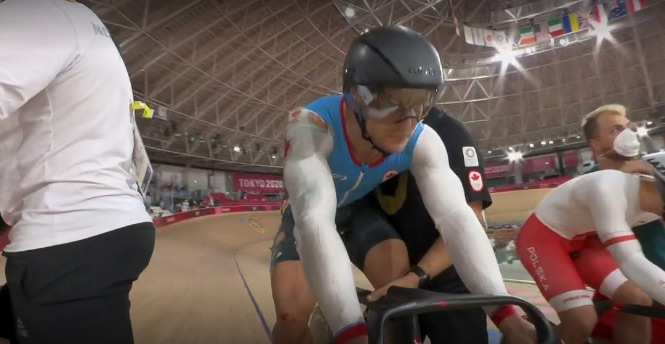 Shortly after hitting the ground hard, Hugo Barrette was back on the start line for his repechage. Still in his torn kit, Barrette sat into second wheel behind the derney. Sam Webster of New Zealand made the early move to take the lead just as the derney pulled off. It was all for nothing, though, as sprint gold medallist Harrie Lavreysen (Ned) flew from the back of the pack through, around and past the field to take the win.

Barrette finishes fifth, an impressive showing considering his crash. But it does end his run in the Keirin at the Tokyo Olympics.