Lionel Sanders has beaten Mathieu van der Poel, in the world of Zwift. Now the Canadian triathlete has a more historic achievement, the Canadian one-hour distance record. Sanders rode 51.304 km at the Milton Velodrome on Friday to set the new record.

While Sanders’s name may be less familiar to cycling fans, he is already incredibly accomplished in the world of triathlon. As he’s edged more toward cycling, first in virtual racing and now live in-person on the track, he’s catching the attention of the cycling world. But, to recap, Sanders has finished 3rd at Ironman world championships in 2017, and is one of the most successful athletes in the 70.3 Half Ironman distance. He has an impressive 27 wins to his name in the 70.3 distance.

Sander’s covered his historic distance of 51.304 km in 60 minutes. That added up to 205 laps of the Milton Velodrome, north of Toronto.

One hour is a long time to be on your own, on the limit. Sander’s shared three benchmarks he set for himself coming into Friday’s record, to help with motivation. The first, Ed Veal’s prior Canadian record of 48.587 km. The second, to break 50 km. The third, matching Jens Voight’s 51.1 km marker, set in Grenchen, Switzerland in 2014.

Sander’s hit the first benchmark, Veal’s record, with a full three minutes left to spare. From there, the next two benchmarks were checked off as the clock counted down the final seconds.

“That was a very very painful experience,” Sanders said of how the attempt felt, as he was still catching his breath. “But it was great. I enjoy this stuff. I live for this stuff. This year I’ve really only done Zwift races, so this feels like the first race of the season. It felt fantastic to push myself to the limit, and feel what that feels like again.”

Despite the incredible effort, Sanders appeared composed almost right away. He even smiled and gave Veal, who was present and commentating, the prod that it was back on him to reclaim his record next.

As for how the record attempt played out, Sanders shared that he was prepared for it to hurt, but not that much, or for that long.

“I’d done a 30 minute before, but the pain doesn’t even start until 30 minutes,” he said post-ride. “I thought I’d have something more, something to push for in the last 10 minutes, but there was absolutely nothing left for me to increase the speed anymore.”

For Sanders, that was a sign that his pacing was right on. He finished with consistent lap times, and the feeling that he couldn’t possibly go any faster.

From one champion to another

Previous record holder Ed Veal was on the scene in Milton Friday, lending his experience on the commentating side of the boards. A veteran of track racing in Canada and around the world, Veal was visibly impressed with Sanders effort, and especially his consistent lap times.

After an hour behind the microphone, Veal was happy to hand his record over to Sanders.

“It was an honour to hold the record. I’m so glad it’s in his hands,” Veal said. And what of Sander’s prodding that it was Veal’s turn to chase the record? “That’s out of my reach here at Milton. I’ve done my own math calculations and I’m not doing 51.3,” Veal said, before adding, “—in Milton.”

As for Veal’s thoughts on how long the 51.3-km marker will stand, he returned to one of his common refrains. “Records are made to be broken. This one will be broken. But by who? Where? When? Who knows?”

Losing the record is something Sanders is already comfortable with. “I hope someone does and does it soon,” he said. “It was quite fun, and I’d like to do it again.” 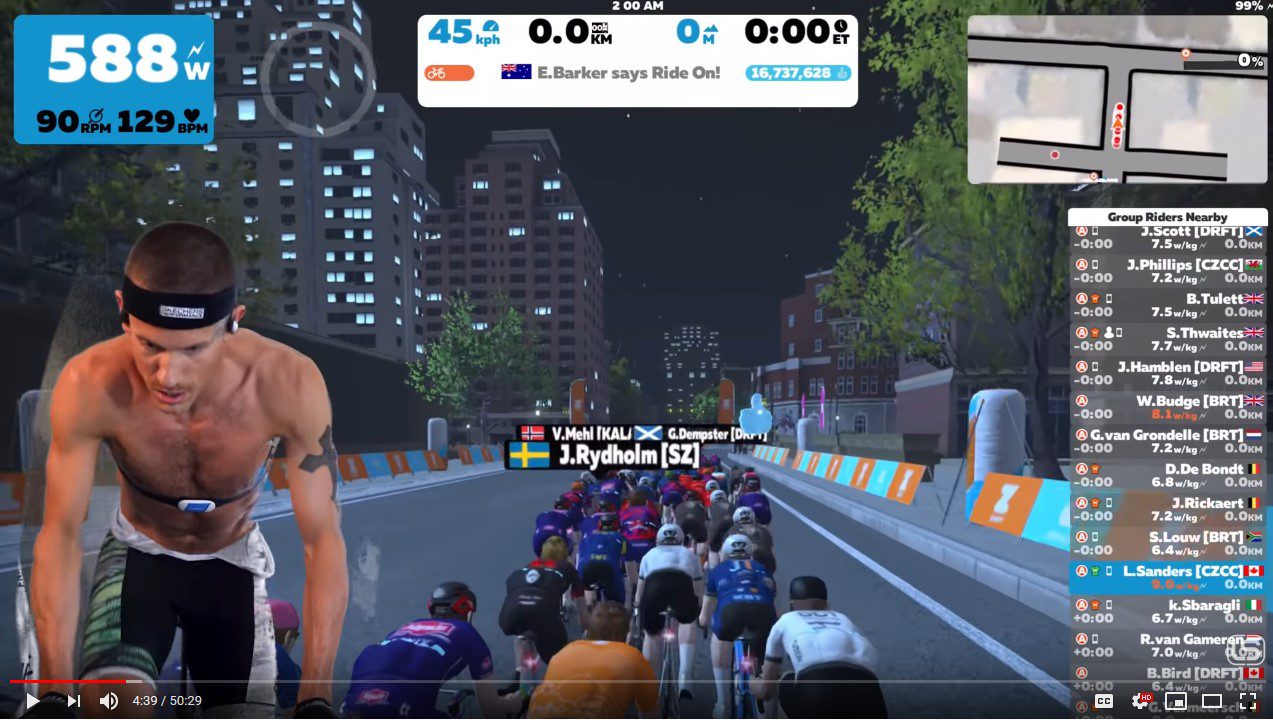 No Racing, No Problem: Sanders finds new challenges in a challenging year

During the COVID-19 pandemic, Sanders has taken on a number of cycling challenges, including claiming the Mt. Lemmon (Arizona) KOM on Strava. In April, another triathlete, Sam Long, managed to top Sanders’s time. Sanders was a mainstay within Zwift’s pro racing, too, taking an esports pro cycling race over cyclocross world champion Mathieu van der Poel and taking a win and a number of podiums at Z Pro Tri Series events.

He will also compete for Canada in the first-ever esports world championship this December.

“That’s a really cool event,” Sanders says of the upcoming esports world debut. “That’ll require some different preparation. I think to even compete in that you’re going to have to do 700-plus watts for a minute and half to have any shot in that final sprint. I’m excited. It’s fun that racing’s coming back.”

For more details, and to find out which cycling pros were watching Sanders’s effort, read Triathlon Magazine Canada’s report.