The men and women both tackled the same 50-km course on the Zwift island of Watopia. The racers faced two climbs, the Zwift KOM reverse (2.5km at 1.8 per cent) and the Zwift KOM (0.9km at 5 per cent) for a total of 483 meters of elevation.

Different locations around the world, but ONE race! 🌈#Watopia2020 pic.twitter.com/qpIcIoXlZj

The pace was fast and Simmerling and Baril worked their way into the lead group led by Moolman-Pasio. Naeth was in the second group. Baril and Naeth opted to wear jaunty flat caps on their avatars.

The penultimate climb demanded that the riders use their featherweight power ups. The Americans had the numbers, and they tried to tire out the legs of the breakaway.

Heading towards the final climb the pace increased. An American used a power up before the ascent and bolted, but Moolman-Pasio counterattacked and went clear. Sarah Gigante (Australia) joined the South African. Moolman-Pasio held off the Australian to become the first ever cycling esports world champion. Swede Cecelia Hansen topped off the podium. Simmerling was top Canadian at 18th.

Aggressive early racing dislodged many from the 77-strong field, including Thomas De Gendt and Esteban Chaves. The Canadians held onto the lead group and on a short rise, they took over the front to string out the bunch.

Again, inside the last 4 km Canada went bounding up the road. Cheyne led the way. 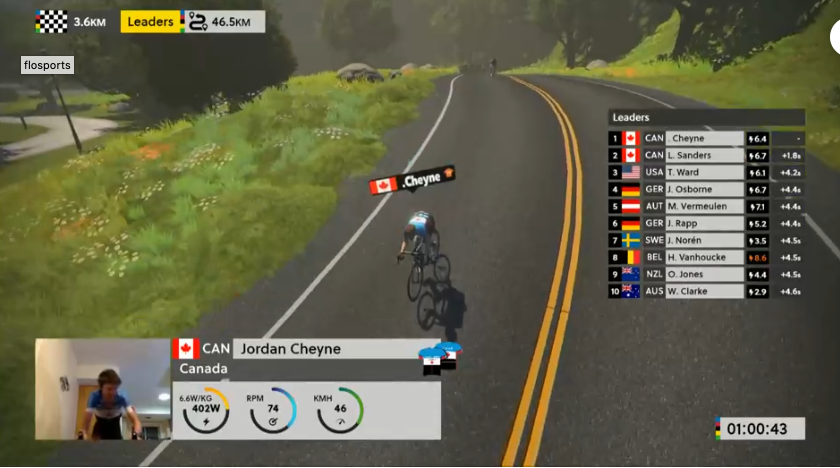 Cheyne used his power up inside the last 2 km to surge ahead but Dane Michael Valgren caught him before the final climb. Two Germans crested first and then Jason Osborne went clear, using an aero power-up in the final 200-metres. Two Danes rounded out the podium.