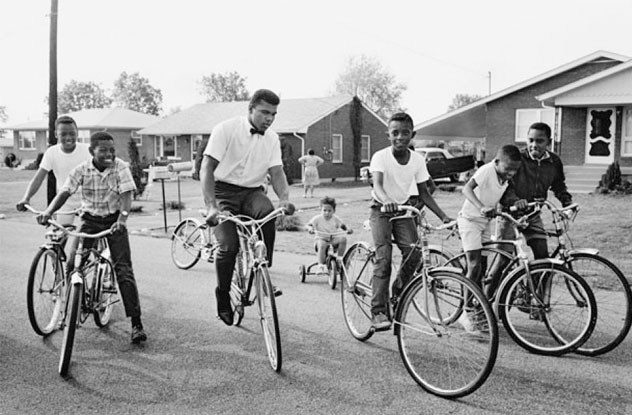 As a 12-year-old boy, Cassius Marcellus Clay, Jr. was furious when his red Schwinn bicycle was stolen. It was October 1954 and the bike was a Christmas gift from his father. A young Clay had ridden the bike to the Columbia Auditorium in his hometown of Louisville, Kentucky. When he returned, it was gone. Furious he stormed off to find a police officer he was told was training at a nearby gym.

Clay explained what had happened to officer Joe Martin, who was a boxing enthusiast, and reportedly threatened to “whup” whoever stole the bike. In response, Martin suggested, “Why don’t you learn something about fighting before you go and make any hasty challenges?” After helping Clay file the police report he invited the 12-year-old boy to join him at the gym and learn about boxing. It took six weeks of training with Martin before Clay won his first bout.

The incident set Clay on a new path. Late Friday, June 3, Muhammad Ali passed away at the age of 74. The former heavyweight champion was admitted to a hospital in Pheonix Arizona. He had been suffering from a respiratory illness, a condition complicated by Parkinson’s disease.