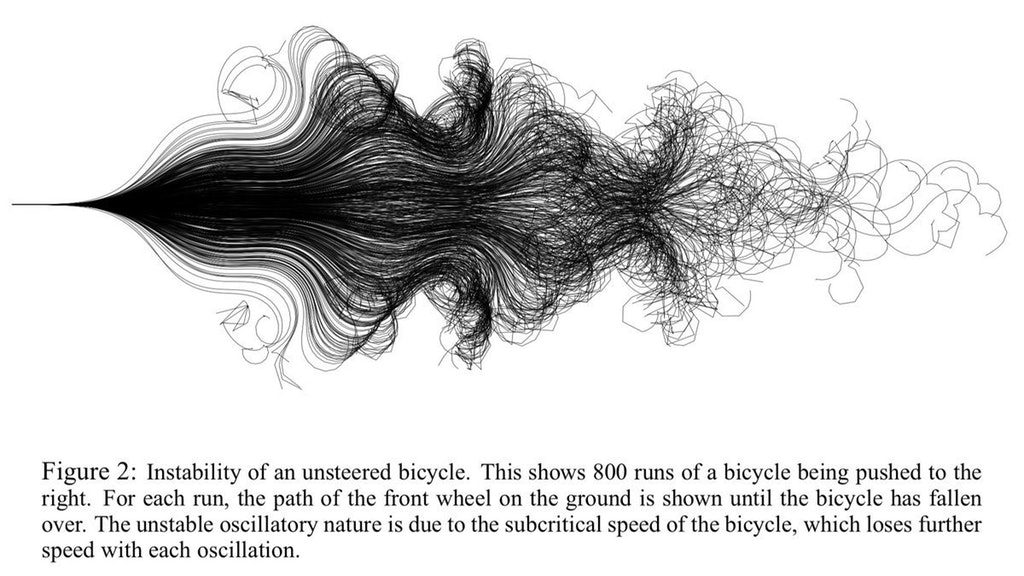 What does the path of a bicycle pushed until it falls over look like? That’s what researcher Matthew Cook of the California Institute of Technology in Pasadena wanted to figure out. The driving motivation was to gain insight in how we ride a bicycle.

He was stumped when he rode a virtual bicycle that did not accurately reflect the real experience. He wanted to figure out what in our understanding of how we keep bicycles upright was flawed or missing. “In real life there must be additional inertial cues that I sense or leaning actions that I make which are missing from the simulation, since I had to learn, as if from scratch, what cues to attend to and how to react to them,” he writes about the experience riding a virtual bike in the paper It Takes Two Neurons To Ride a Bicycle.

Part of better understanding bicycle physics was studying the paths of 800 unmanned bicycles pushed until they fell over. The resulting figure was a beautiful model mapping the paths of the bicycles front wheel.  The unstable oscillation when the bike reduces to critical speed resulted in a mesmerizing visualization of the 800 test runs of the unsteered bicycle.

Bicycle dynamics is an extremely complex field of study and creating algorithms to control bicycles has proven a difficult task. Learning to balance, steer and correcting the path of a bicycle is tricky business.

In the study, Cook used a two-neuron network to operate the bike over a range of speeds. Artificial neuron networks learn to accomplish a task by analyzing and considering examples progressively improving in performance. Such technology has been used for facial recognition and to recognize handwriting.

The model was able to control the bike competently and could be used to make the bicycle head for a specific goal or follow a path towards a sequence of waypoints. The model however was not good at stabilizing the bike at low speeds or in turns that were too sharp.

The next step in furthering this initial research would be having the model ride bicycles of different models to learn and tune its parameters with more experience. While this model was created with some human input, ultimately Cook wants the computer to be able to figure out its own network using a minimal number of crashes to learn how to handle a bike.