It’s nearly a seven-hour drive from Queen’s University in Kingston, Ont. to Philadelphia where the first weekend of Eastern Collegiate Cycling Conference racing took place over the weekend. That didn’t stop 16 Queen’s students from loading up their bikes into rental vans and making the pilgrimage down to race against top American colleges like the Massachusetts Institute of Technology, Penn State, Northeastern and the University of Vermont.

The long drive paid off. Not only was the weather uncharacteristically warm and beautiful but cyclists from Queen’s won races across the weekend’s team time trial, crit and road races. Queen’s now comfortably leads the league’s overall standings ahead of MIT and UVM. Andrew Jonker and twin brother Ryan sit first and third in the men’s A overall while Chloe DeRoche and Hanna Girndt do the same in the women’s A standings.

Back in Kingston after a successful weekend, team president Chris Hatton is rounding up the team for one of the first outdoor team rides of the season. The weather in Canada is finally warming up but a lot of students are still catching up after a long weekend away from their school books.

“It’s always crazy,” Hatton says about the ECCC race weekends. “We leave on Friday and come back late on Sunday night often around midnight. School builds up a little bit.

“The [Jonker’s] twins are engineering students. Their class schedules are hectic. They have 30 hours a week of school and 10 to 20 hours of riding. We all make sacrifices to focus on class and riding,” Hatton says about achieving a balance as students. “That’s why we are all super tight on the team, we sacrifice a bit of the social activities outside of the team.” 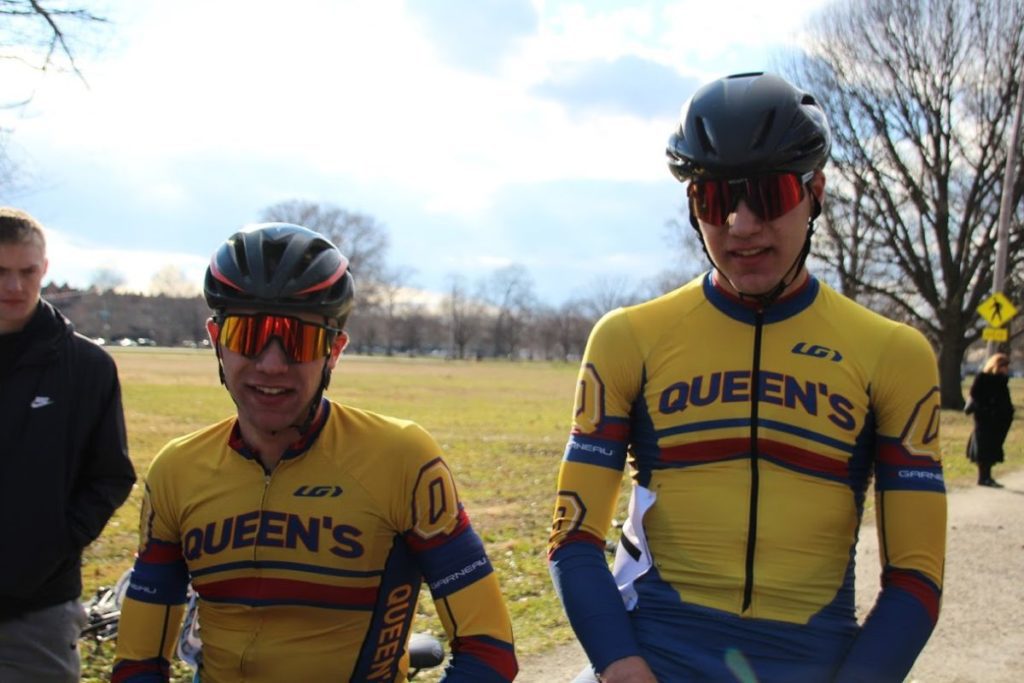 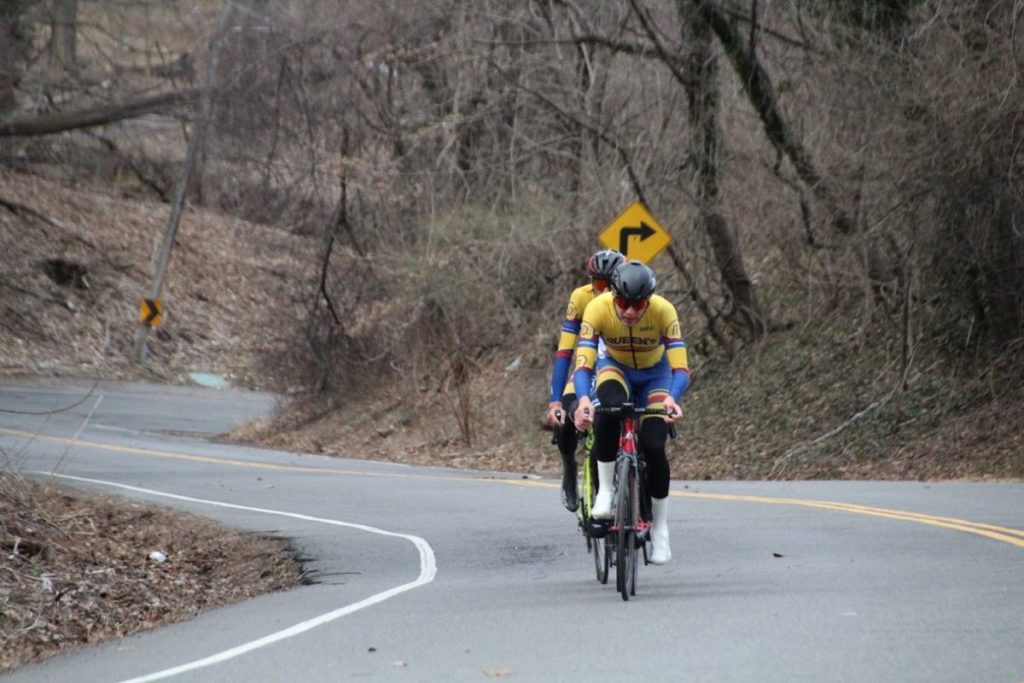 Ryan Jonker leading the breakaway group during the men's A road. Andrew Jonker following behind. 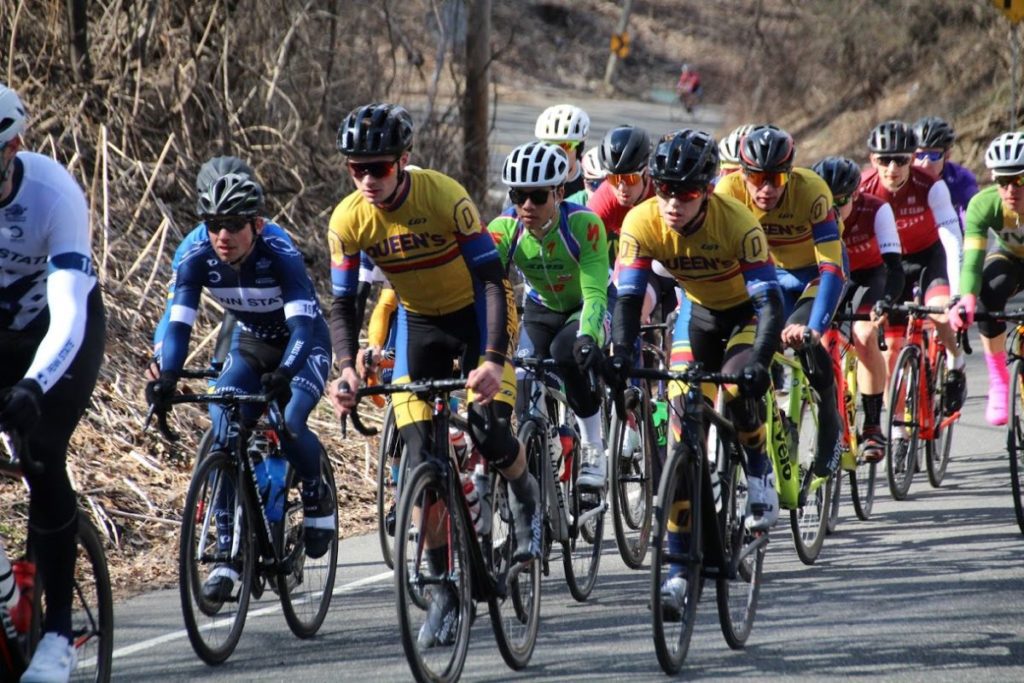 Chris Hatton (left), Adric Heney and Andrew Jonker on the climb during the men's A road race on Saturday. 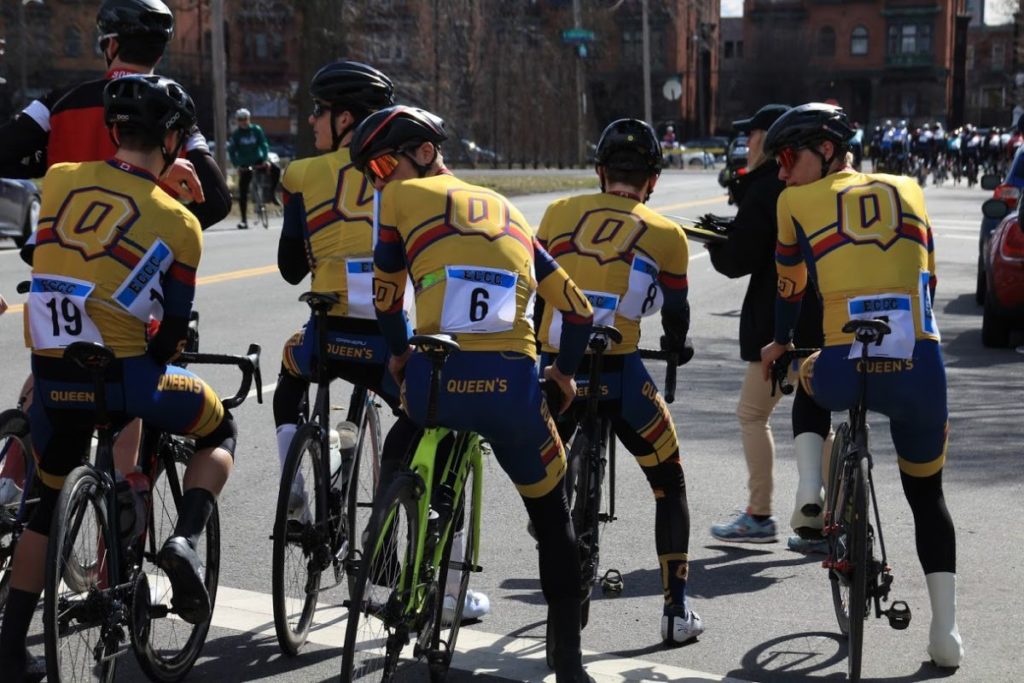 Chris Hatton, Ryan Rudderham, Andrew Jonker, Adric Heney and Ryan Jonker at the start line of the men's A road race on Saturday. 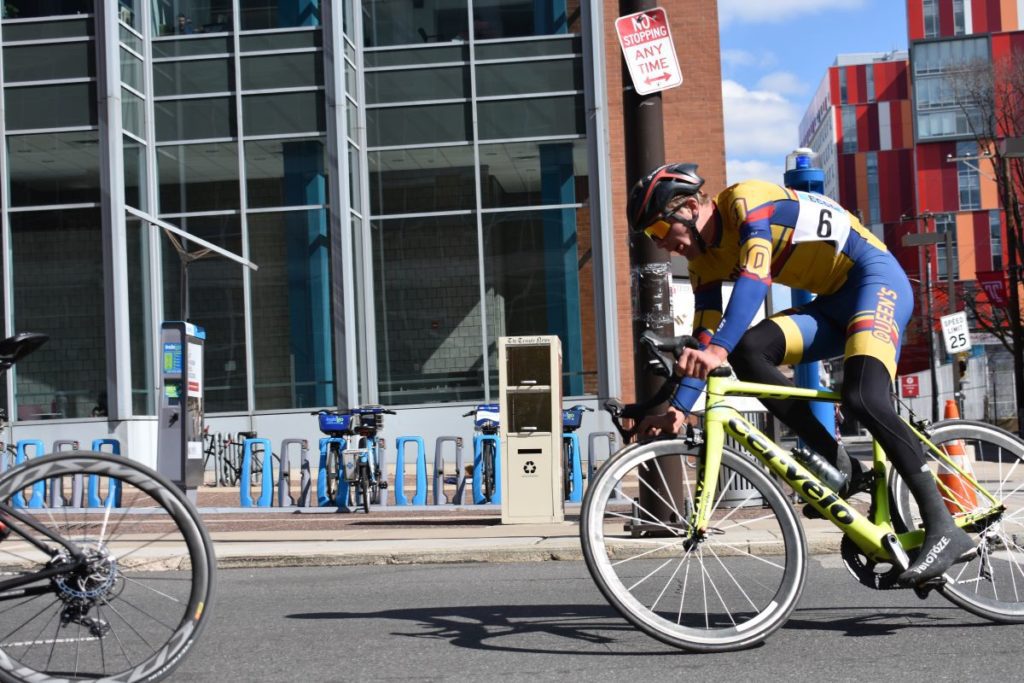 Andrew Jonker in the breakaway during the men's A criterium. 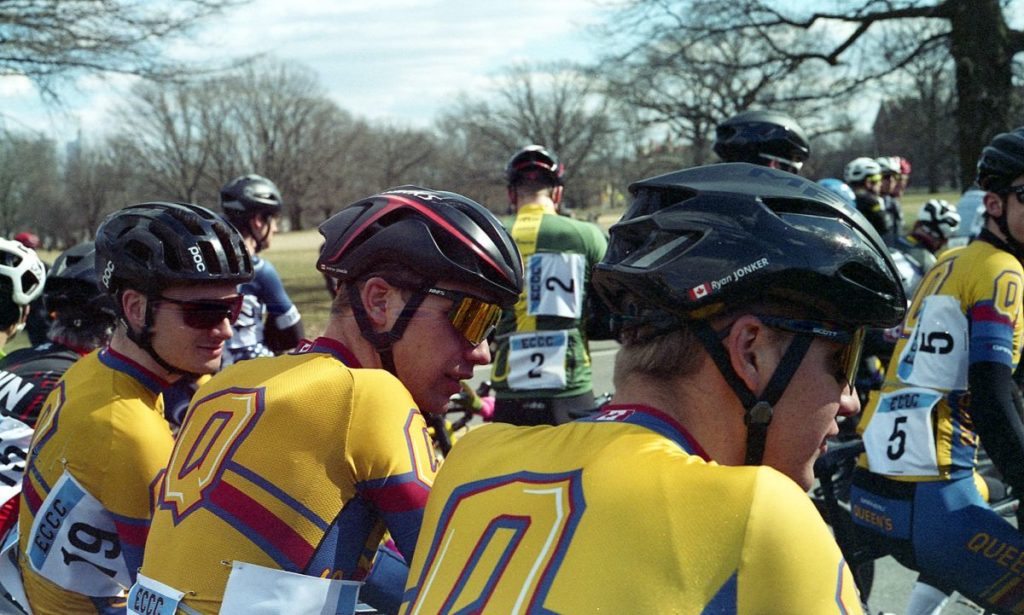 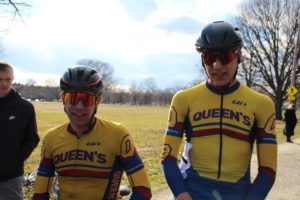 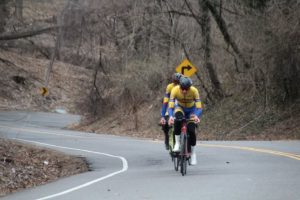 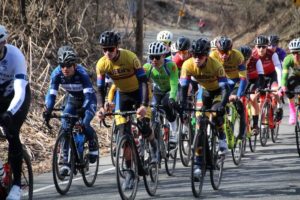 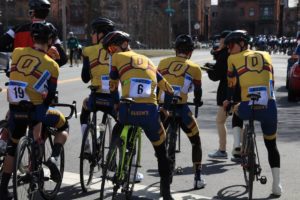 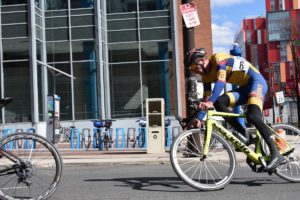 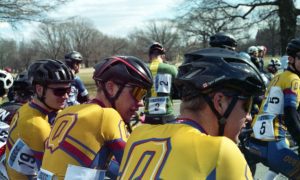 Queen’s Cycling has one of the biggest presences in the ECCC despite it being an American collegiate league. Hatton attributes some of the team’s success to the infrastructure from the varsity mountain bike team. In all there are 30 team members, 18 of whom compete on the road across the ECCC’s categories that range from A to intro.

Another key is the team’s cohesiveness that’s developed through social events and regular team training. In the fall, there are often as many as seven team rides a week split between mountain bike and road. In the winter they have two strength training sessions a week and everyone brings their trainers to get together for a big group indoor ride once a week. In the fall, the team begins to do simulated racing clinics for new racers and begin TTT practice so they are dialled for the spring.

They also do team-wide testing three times a year to motivate and track progress. It all helps set the team up for success. Then during the February reading week, the team does an informal training camp in North Carolina to escape winter and build fitness. The team is so well known it helps to attract students who want cycling to be a big part of their university experience to Queen’s.

“As much as it’s about the results, collegiate racing is about having a great time,” Hatton says about balancing the team’s race ambitions while fostering a fun and social environment. Queen’s has historically been one of, if not, the strongest team in the ECCC.

“People step up and continue on where the last team members left off. We are really lucky with the great personalities who continue to contribute and help grow the team,” Hatton, who is a fourth-year undergraduate student, says.

Queen’s is not the only Canadian university that races in the ECCC. McGill University had a good first weekend finishing in the middle of the overall standings. One ahead of Mcgill was the University of Toronto thanks to wins in both the men’s B circuit race and crit. Finally, the University of Ottawa travelled down to the Philly Phlyer.

“It’s really fun to see Canadians going down more and more,” says Hatton about the Canadian camaraderie. “Canadians definitely ban together just because we are surrounded by massive American colleges. You hear chants of ‘Go Canada Go’ during races.”

The races attract riders across ambitions and abilities. Queen’s plans to attend three of the four ECCC race weekends before skipping out on the last one and the ECCC championships because of exams. Hatton is happy most of the team will be attending all three race weekends.

“It’s less about the results and more about the experience, it’s rewarding while you are there. I started as a men’s C rider but I wanted to go every weekend cause people were so encouraging,” he said. “There are a lot of people to share that passion and environment with. The race season is tough, it can be a grind but it’s great to have a lot of people really motivated to make it to each race.“ 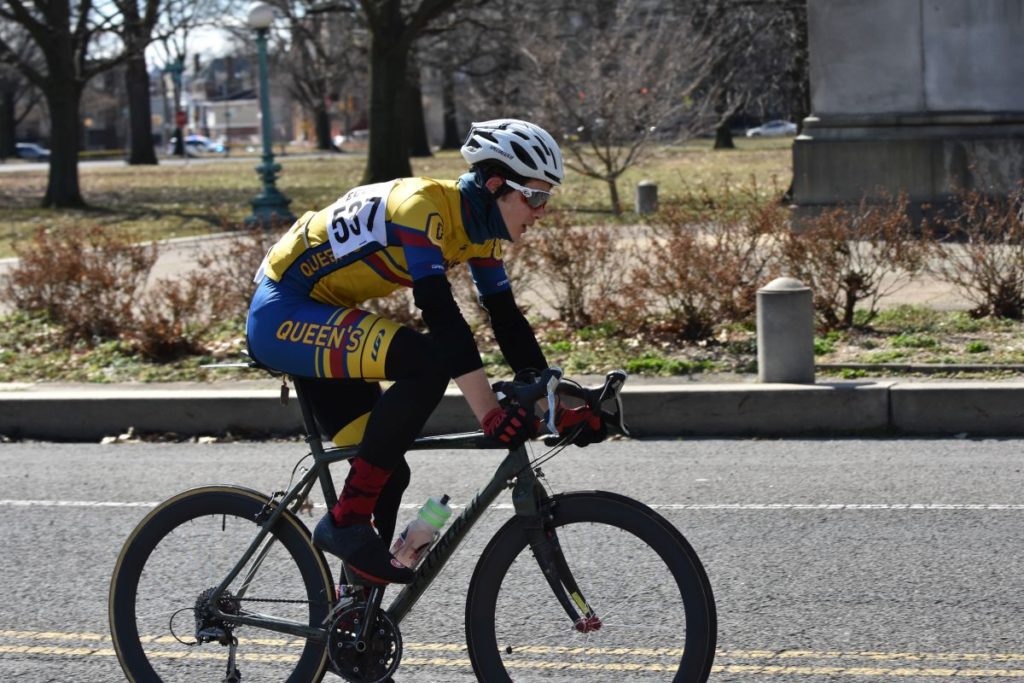 Eric Yuyitung focused during the circuit race on Saturday. 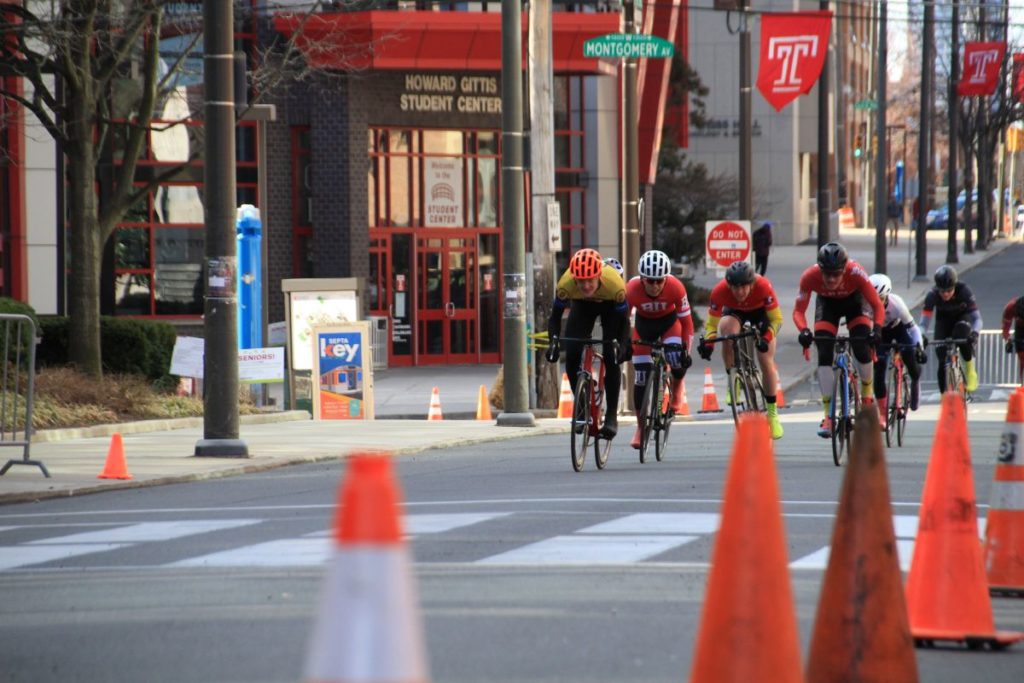 Lyle Porter bringing it into the finish for the win in the men’s C crit. 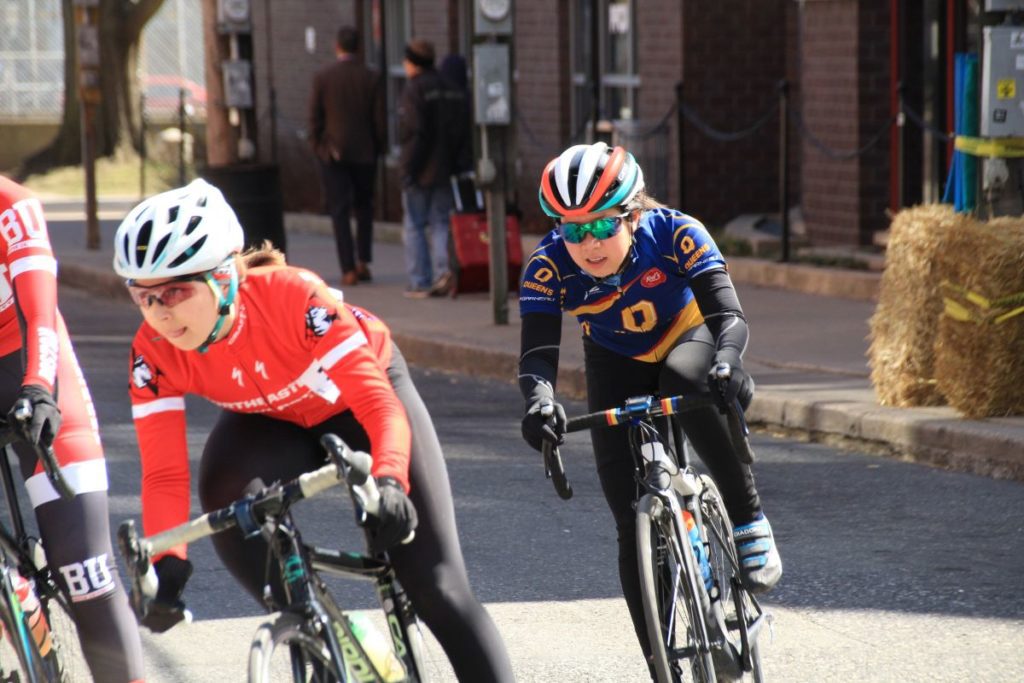 Melissa Wong in the lead pack during the women’s D crit. 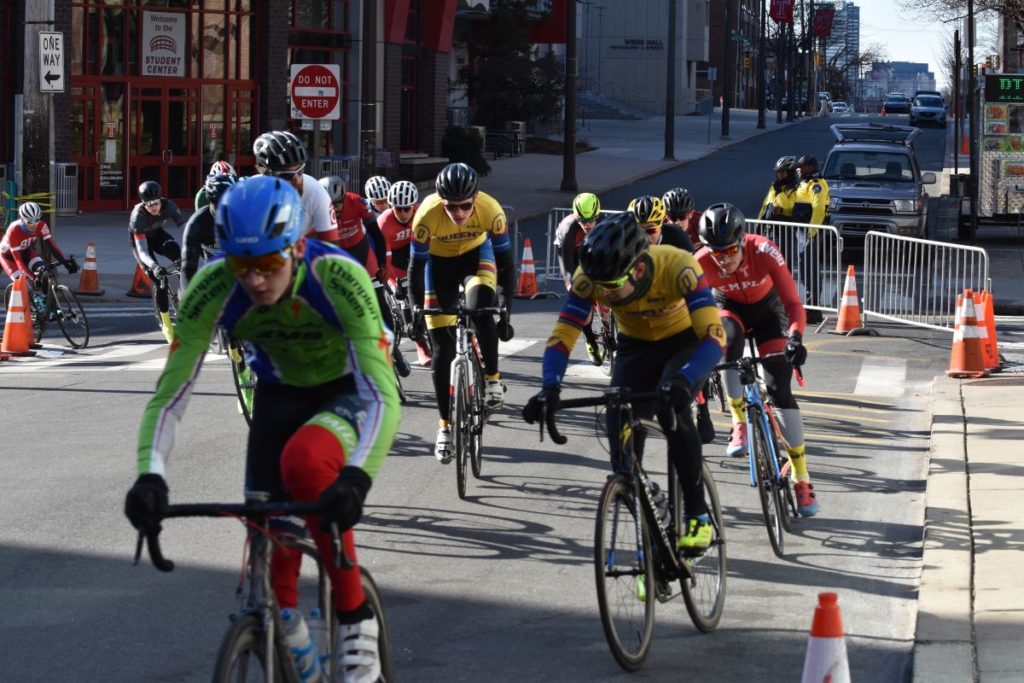 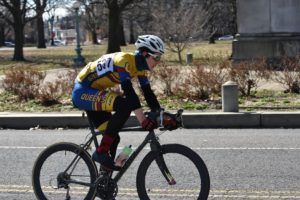 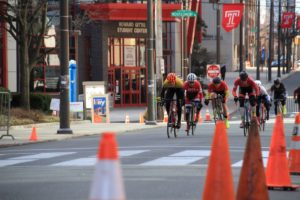 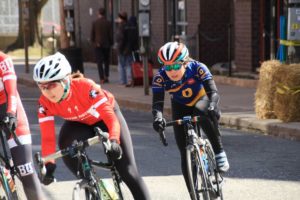 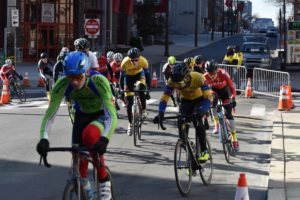 The ECCC season continues March 30 and 31 at the Bucknell Cycling Classic in Lewisburg, Pennsylvania. The next weekend, the drive to the L’Enfer du Nord in Hanover, New Hampshire and Middlebury, Vermont will be a little shorter but by all indications, Queen’s will still be the team to beat.