The latest episode of  The Simpsons aired on Sunday, it contained a lengthy gag parodying road cycling. While we love all things cycling, we knew there was exactly one person to call. Thrillhouse cycling has operated at the hyper-local nexus of The Simpsons and cycling memes for years now. If there ever one person so expertly qualified to deliver incredibly detailed, possibly unnecessarily detailed analysis of a TV episode, the time is now and that person is Thrillhouse.

Hello, I’m Thrillhouse and I run the internet’s 35th favourite cycling meme account—@thrillhousecycling. For a couple of years now, we’ve been producing satisfactory memes that combine The Simpsons and cycling to sometimes hilarious effect.

On Sunday, November 29, The Simpsons—finally!—created a short parody of road cyclists. I was at once intrigued, curious, and terrified. Intrigued because, well, any mainstream depiction of cyclists is fascinating (it’s equally interesting to see what writers get wrong on top of what they get right). Curious because I seriously haven’t watched the show past the golden age (Seasons 2-10), and terrified because, at long last, the disparate worlds of cycling and The Simpsons have finally canonically collided. It’s the kind of cosmic phenomenon that could cause a loophole in the space-time continuum—the equivalent of a wormhole colliding with a blackhole (or something).

RELATED: Thrillhouse Cycling: Who is the human behind the Meme?

But first, some context for the scene itself.

Principal Skinner and Super Intendent Chalmers are driving to Cincinnati, where Chalmers will be giving a keynote address at a conference. They stop for a beer at a biker bar—The Greasy Chain. So, the joke is they think they’re heading into a motorcyclist’s bar (has anyone ever called a biker bar that ever in the history of biker bars?), but it’s really a bunch of roadies.

That’s pretty much it. From there, wacky antics ensue, and the riders end up chasing Skinner and Chalmers outta the bar.

Okay, that outta the way, let’s get into the hits and misses.

Not bad! Chalmers crosses paths with a rider whomst tells him to beat it, for if his resting BPM hits 60, there will be hell to pay. I mean, a 30 BPM resting HR is pretty impressive. This guy clearly shreds, so Chalmers is right to be frightened. The watch is a bit of a miss, though—who rides with a head unit AND watch?

Hit #2: Sons of Shimano and Aerogant

The leg wrestling joke is meh, but the jersey jokes are pretty good. Someone did some surface-level research to come up with Sons of Shimano (a riff on “Sons of Anarchy”). The better joke, however, is Aerogants. It took me a minute to get, but when it lands, it’s a good chuckle. 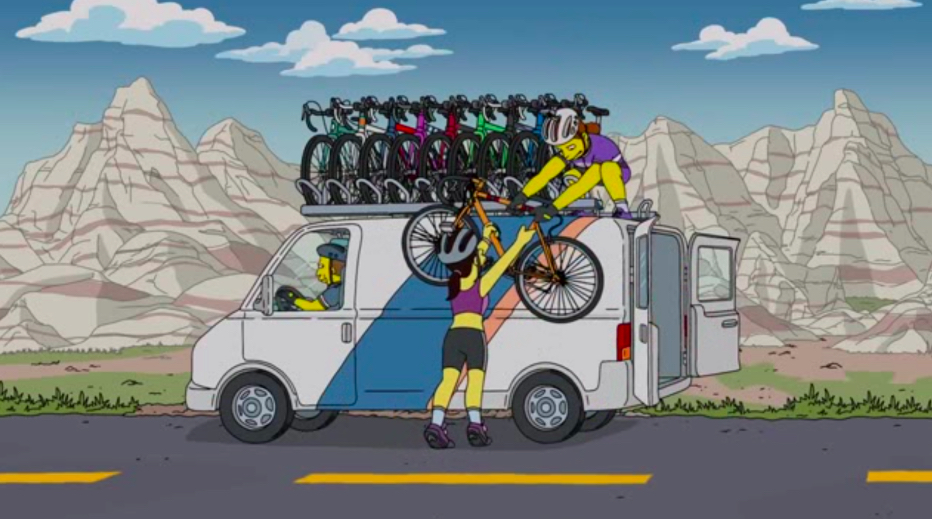 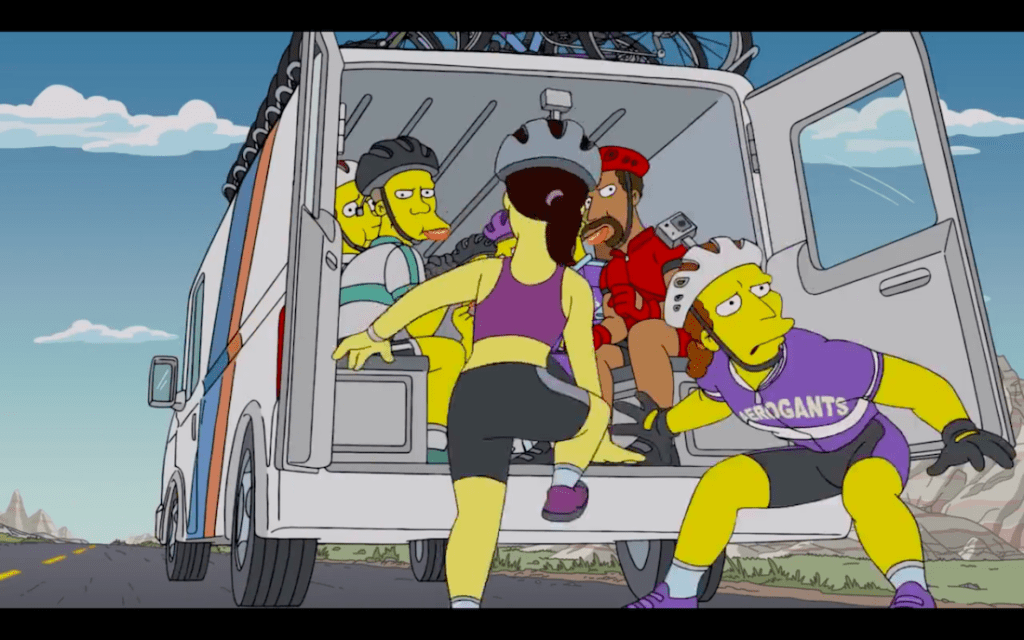 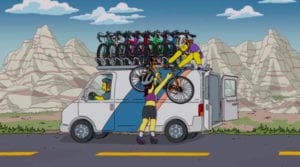 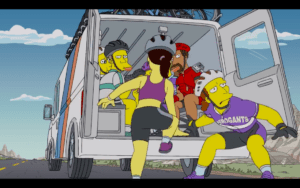 Good line reading from Dan Castellaneta (I think?), and them hucking the bikes on the roof and scuttling into the back of the van while suckling on gels is a fun bit of animation. Good end to the scene.

This is probably the best joke of the sequence. When backing away from the resting heart rate super fast guy, Chalmers accidentally knocks over and breaks a bunch of head units charging. One cyclist exclaims “all our stats were on there,” another responds “they hadn’t synced yet!” The bar is infuriated! Chalmers meekly saying “you still got the exercise, right?” is icing on the cake—because, really, it’s not about the exercise at all, just the stats. At least the GoPro footage was saved.

Good character design! I’d ride with him. The helmet is a little off though (more on that later).

But now, the misses. Let’s get pedantic, people (that’s where I’m a viking!)

The bar collectively laughs at Skinner and Chalmers, and proceed to suckle on Camelbak/hydration pack hoses. It’s not horribly observed, but not too many self-serious roadies don Camelbaks for fear of ridicule and shame. Some kind of “it’s not a bottle it’s a bidon!” joke woulda been better, especially since all the chairs had water bottle cages on them. Or, Chalmers trying to break a bidon to defend himself? The possibilities are endless! Hire me, Simpsons!

At one point, Chalmers calls resting heart rate guy “slim,” which enrages him. I’m hard-pressed to think of a cyclist who would be that offended to be called slim. Besides, Triplets of Belleville did this bit 15 years ago, and did it better.

Yeesh this is a sloppy chase group. Are we to believe this is some magical peloton that can catch a car despite being clearly disorganized? I sure hope someone got fired for that blunder! (Editor’s note: no I don’t). The animation/cycling nerd in me would have loved to have seen an extended animation sequence taking pulls and leading out the maniacal laugh guy (who was kind of a fun character I wish they’d developed more in the time they had here).

The animators did a pretty good job of capturing what a head unit looks like in terms of UI/UX. They all say speed, distance, calories… but where’s the wattage?! Ok, I’m being very picky, but a little watt-nod woulda made cyclists the world over squeal with delight.

A bar serving just energy gels is kinda funny. But let’s be real—the majority of cyclists love their beer. EPO infused IPAs or something would have been funny, but, hey, it’s my job to point out these blunders so I can be hired as a consultant next time.

The character design of the cyclists wasn’t bad, but the helmets all looked… weird? Angular? Also these bikes CLEARLY don’t have discs or STI shifters. Sheesh! The character design wasn’t terrible by any means, but could have been a bit stronger across the board.

Overall, not bad! But I think they could have been a little more original with the biker bar concept in general. Superimposing old school ideas of “super tough biker bars” onto cyclists is okay, but not enough to really blow my hair back. That said, I can think of only two shows that have provided parodies of cycling to a similar quality. Bob’s Burgers did a pretty good job of it in the episode “Thelma & Louise Except Thelma is Linda,” (S7E19) while Malcolm and the Middle’s lampoon of speed walking is an all-time classic.

Historically, Simpsons have done a really good job of satirizing specific niches and sub-cultures. This scene was pretty good, but I wouldn’t place it in the pantheon of greats.

Overall, this scene gets 7.3 Thrillhouse Memes out of 10

For a full in-depth commentary and exhausting, uninteresting critical analysis of this scene, head on over to @thrillhousecycling on Instagram where I will finally make use of that IGTV or Reel function.