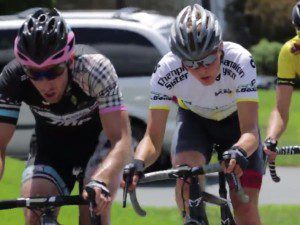 The final stage’s parcours wasn’t the longest, however, it was one of the hardest courses of the race. Riders completed 10 laps of the 12.4-km course that was hilly with several technical high-speed corners interspersed throughout. Positioning on this circuit was absolutely crucial as the peloton simply got smaller and smaller. Within three laps of the race, the field was but a fragment of what it was at the start. With a DNF list almost as long as the finishers list, it was clearly a race of attrition.

The 1.5-km climb to the finish was the key selection point of the course. On the first lap, a breakaway of four established itself. Joshua Berry (Team SmartStop), Pierrick Naud (Garneau-Quebecor), Timothy Roe (Budget Forklifts) and Kyle Buckosky (H&R Block) were in the move. They gained a maximum time of 1 minute before they were pulled back. Team Hincapie Development was keeping a close eye on everything to protect Skijun’s leader’s jersey. Soon the peloton cracked and formed into the three main groups once the break was caught. Of note, Serghei Tvetcov (Jelly Belly p/b Maxxis) was dropped and lost his second place overall to Britton.

On the last lap, Woods launched a furious attack up the final climb. It proved to be a little too far out as his drive faded. The top three on the stage came around him with 500 m to go during the final surge to the line. Skujins ultimately won the stage, the points jersey, young rider’s jersey and the overall. The king of the mountain’s jersey went to Joshua Berry.

Canadians did very well, particularly on the final stage. To have two Canadians featured in the finale of the last stage and Rob Britton’s second place overall was impressive. The upcoming Canadian national road championships will be an exciting race with many top Canadians racing at peak form.

Thanks @TourDeBeauce for the great week, and thanks @Tomashuuns for winning EVERYTHING.

Skujins, on his 23rd birthday, wins the 29th edition of the Tour de Beauce. pic.twitter.com/frqppQ1fVl