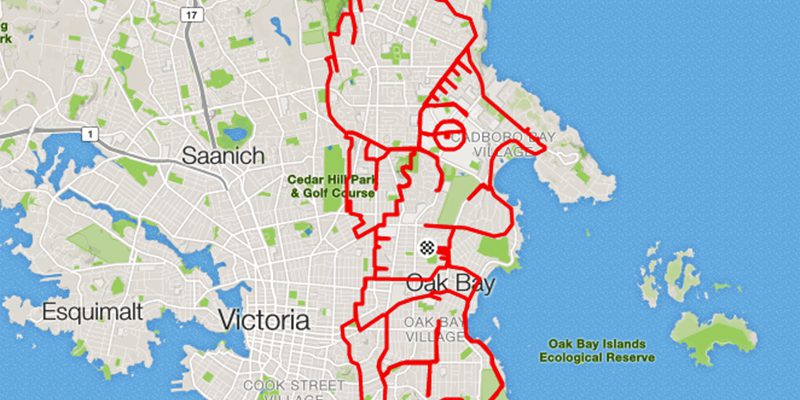 It’s hard to deny that this is the next level of artistic talent, especially in geographical terms.

Strava is used by cyclists everywhere for various purposes, ranging from training to connecting with other cyclists. Using GPS, one of its more appealing features is the way that it maps your ride, providing a visual, graphical depiction of the route your training took that can be shared through its social media functions.

Were a rider particularly enterprising, that ride-mapping function would be a fun way to create some unique, and decidedly very large, art. One rider from Victoria, B.C., the CBC reports, has done just that.

Stephen Lund, a Victoria-based writer, has adopted Strava as exactly that sort of multi-kilometre canvas, tracing the outlines of images and greetings with the routes taken by his various rides around the Vancouver Island city. It all started, the CBC explained, on New Year’s Day of 2015, when Lund cycled through the city in a way that, to observers, may have seemed like a random route up and down city streets. When it was mapped out on Lund’s Strava account, however, that route was proven to be anything but random. In fact, his cycling workout spelled out a message: “Happy 2015.”

Eleven months later, Lund’s Strava account is a veritable art gallery of 70 such pedal-powered works. And they can all be viewed on his website, GPSdoodles.com.

Explaining his ongoing project to All Points West, a B.C.-based CBC Radio program, Lund said, “I pour over a map of the city, and when I see a general shape, I start to look for roads and routes that complete the details. The challenge is that the roads all have to connect. It has to be one continuous line.”

“Then I ride out to the starting point,” he said, “start my GPS, and away I go.”

It’s a detailed, painstaking process to complete the Strava sketches he traces with his bike, which have so far included everything from witches to the Easter bunny. Lund spends hours in preparation, outlining the image he has in mind on a map, then writes detailed directions for himself about which streets to take, where to turn at what intersection, and so forth. The rides he takes are usually before the streets swell with cars and buses, early in the morning. Since January, he told the CBC, Lund figures that he’s biked a whopping 5,000 kilometres around Victoria — with the longest of his “doodles” amounting to a 220 kilometre trek.

The appeal of the British Columbia writer and cyclist’s art has earned the attention of the world, with Lund scheduled to discuss his work at Victoria’s TEDx event on Nov. 21.