Canada’s mountains, forests, prairies and coastal environments give cyclists endless cycling opportunities. From the Atlantic to the Pacific there are beautiful and breathtaking rides on Canada’s roads, gravel and single track. If you want to explore the best Canada has to offer, here are six dream rides in Canada.

Todd “Digger” Fiander is synonymous with British Columbia’s famed North Shore. He’s been building trails for more than three decades and, in 2015, he was inducted into the Mountain Bike Hall of Fame.

“Digger is out there constantly,” says Mike Stormer, a Vancouver resident of 11 years and fellow trail builder. “I’ve seen him digging on Christmas Day. He just loves it. Any North Shore dream ride has to include one of his classics.”

Mount Fromme is the middle of three North Shore mountains in North Vancouver. It’s home to 111 trails that measure 68 km with nearly 10,000 m total descent. While it’s possible to spend an entire day – or season – exploring these trails, Stormer laid out what he considered the single best route for riders looking for a challenge

“From the parking lot, climb the fire road until the 7th switchback, where 7th Secret begins. It’s a heavily armoured trail that can be ridden in any weather,” says Stormer. “The trail ends just above Ladies Only, which is one of Digger’s classics. With mandatory constructed features and steep rough terrain, it’ll beat up a new North Shore rider and leave a smile on an experienced rider’s face.”

If the thought of mandatory features and steep rough terrain is daunting, Mount Fromme does have 37 trails rated either beginner or intermediate. “It’s really growing for beginners,” says Stormer, “even my six-year-old son has ridden two trails on Fromme.”

Cycle Nova Scotia calls the Cabot Trail a challenging road ride carved into the edge of the stunning Cape Breton Highlands. With more than 3,400 m of climbing, its 300 km are most often ridden in two to three days. Still, Strava shows many cyclists who have tackled the double-century distance in as little as 12 hours.

“I opted to do a two-day ride from Baddeck,” says Kenton Lambert, a Backroads cycling tour leader. “The dramatic views of old growth forest, towering red cliffs that drop straight into the ocean and solid climbs combine to make it one of the best coastal rides imaginable.”

The two-day counter-clockwise ride from Baddeck is a popular choice. Overnighting in Cape North, which falls just short of the halfway mark, makes the second day a true 160-km/100-mile century ride that also includes the two most challenging climbs of the entire route.

The Cabot Trail cycling season might run from May until Thanksgiving, but the best time to ride is toward the end of the season. Not only will there be far less traffic in late September and early October, but the East Coast’s stunning autumn colours will add even more drama to this spectacular ride.

The Lakes and Rivers Route 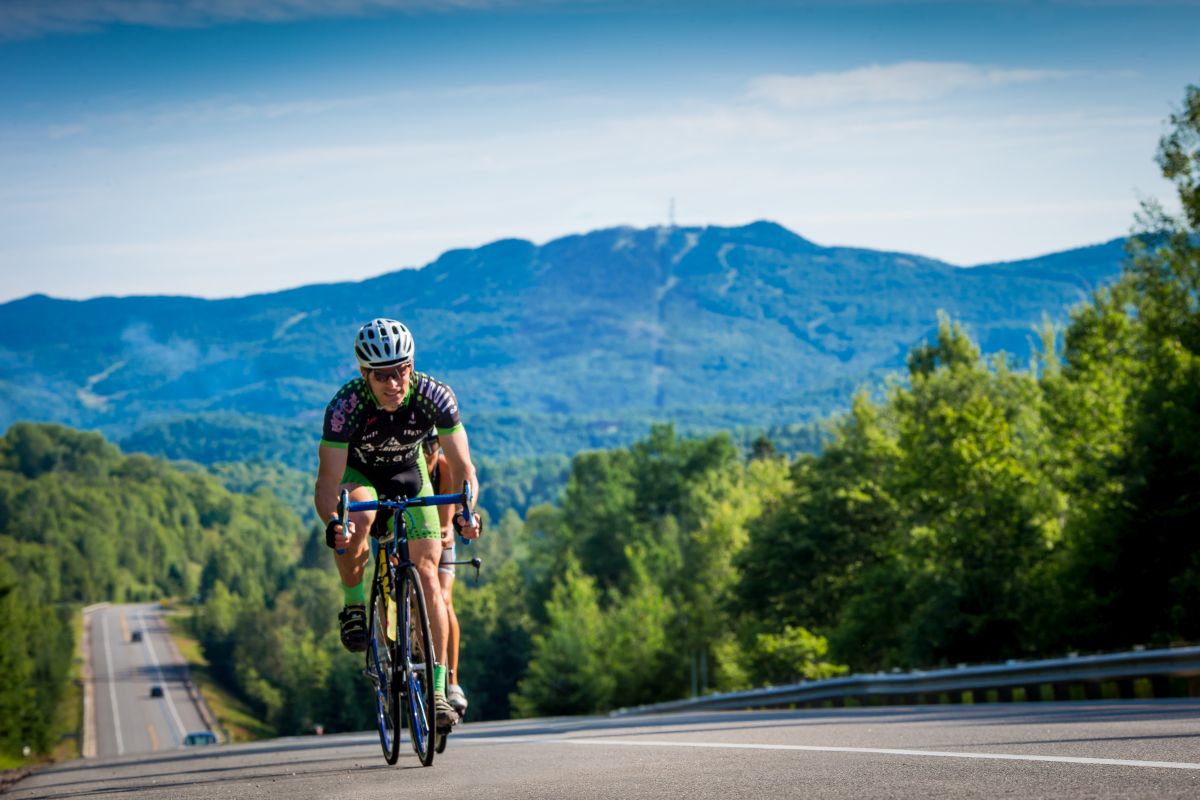 “If there is one ride that sums up the essence of cycling in the Mont-Tremblant area, it’s the Route of Lakes and Rivers,” says Guy Pressault, president of the V2V Cycle Club. “It passes through the vastness of Parc National du Mont-Tremblant, climbs the challenging Chemin Duplessis, and links five incredible lakes before following the Rouge and La Diable Rivers.”

Mont-Tremblant, set in Quebec’s Laurentian Mountains, is eastern Canada’s best-known mountain town. The municipality incorporates a series of smaller communities, including the pedestrian-only village at the base of the ski area, old Mont-Tremblant on the shore of Lake Mercier, and Saint-Jovite. The loop Club V2V recommends begins and ends in the latter; however, it’s a 87-km loop that conveniently connects all three.

For many riders, it makes sense to start with a pre-ride espresso at Cybercycle Tremblant. From there, the route begins with a 1-km, car-free warm-up along the P’tit Train du Nord bike path before turning onto Chemin du Lac Mercier. The downside to this variation is that most of the climbs are found on the second half of the loop. 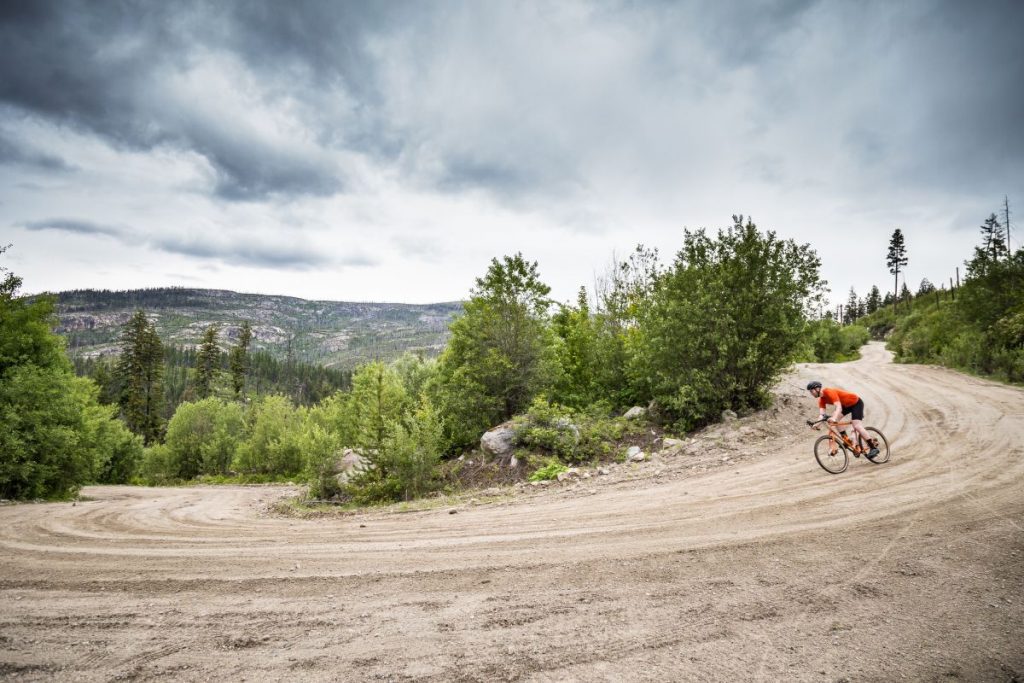 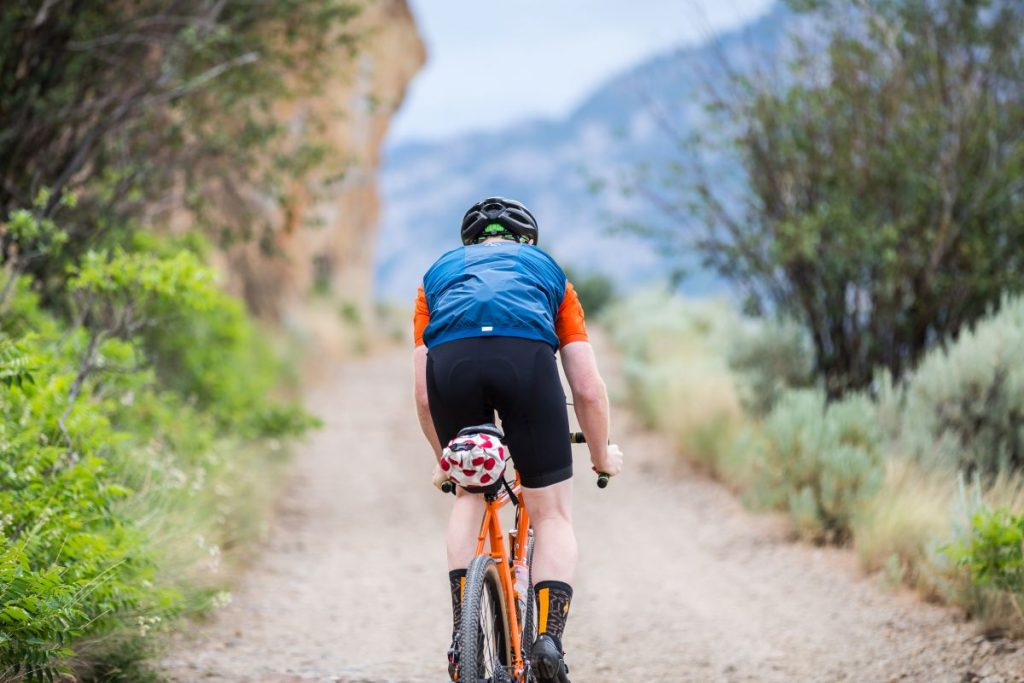 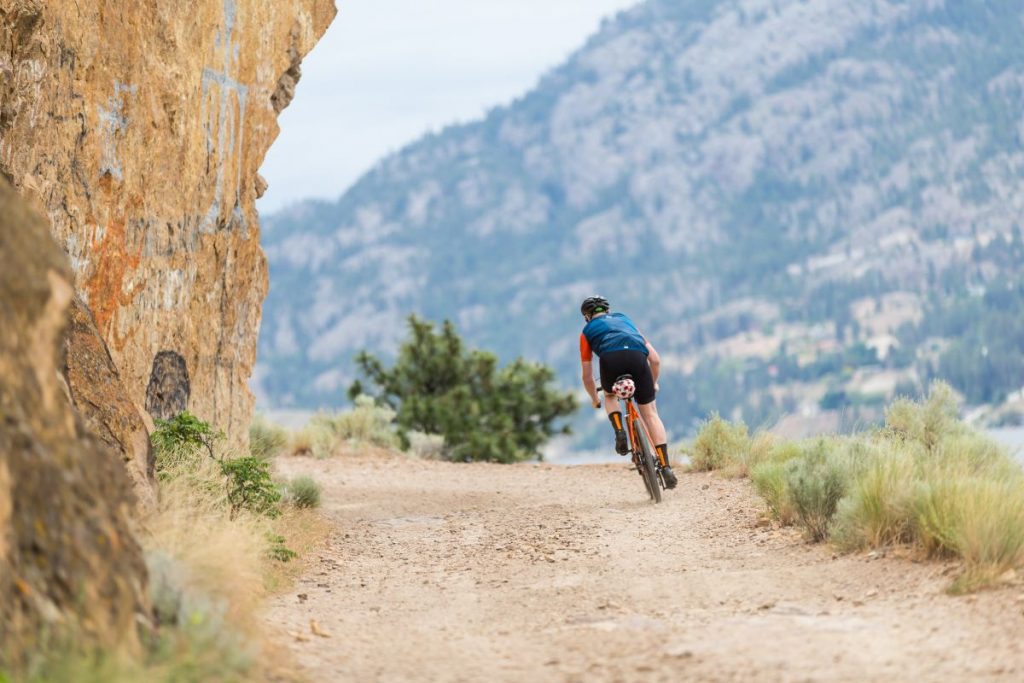 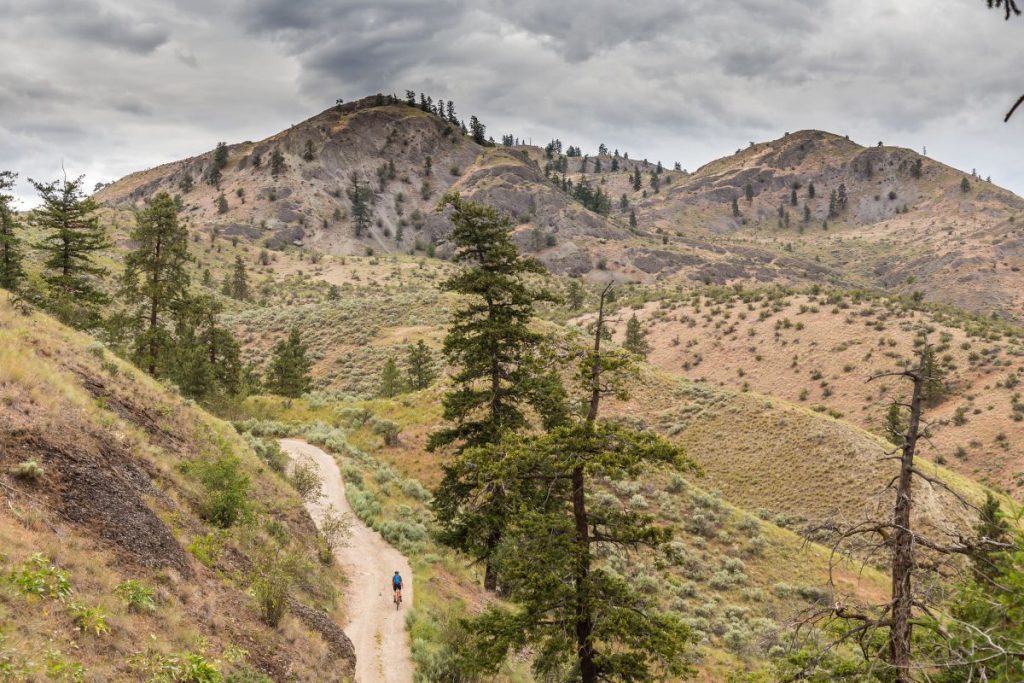 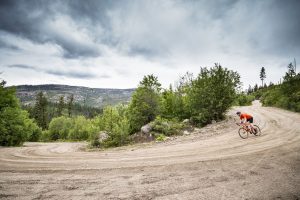 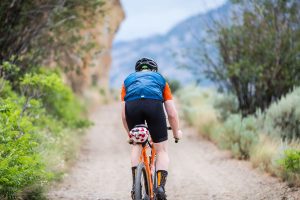 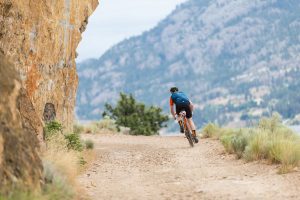 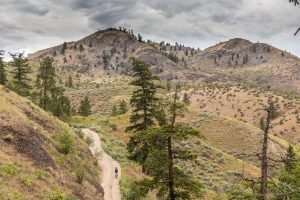 The once-abandoned Kettle Valley Railway has been developed into a multi-use trail that takes in some of the Okanagan’s best scenery with few challenging climbs. Much of this route maintains railway grades that rarely exceed 2.2 per cent, as cyclists cross old trestle bridges, pass through tunnels and enjoy stunning views across Okanagan Lake.

“It’s beautiful and you don’t have to deal with cars,” says Matt Clarke, a cycling photographer based in Penticton, B.C. “The scenery is just unreal: big lakes, vineyards in all directions and these stunning trestle bridges closer to Kelowna.”

The Kettle Valley Rail Trail offers 600 km of multi-use gravel paths, but the 342.2-km Midway-KelownaPenticton-Midway takes in many highlights in a three-to-five-day tour. Clarke also recommends two shorter out-and-back rides from Penticton. “Riding from Penticton to Chute Lake (92 km return) along the Kettle Valley Railway,” says Clarke, “is beautiful. It passes Little Tunnel and has some of the best views in the Okanagan. Or you can continue onto Myra Canyon (160 km return) to check out the famous trestle bridges.”

Riding is possible nine to 10 months of the year. But, it’s one of Canada’s hottest summer climates. Cyclists should start early and finish their summer rides long before the heat of the afternoon. 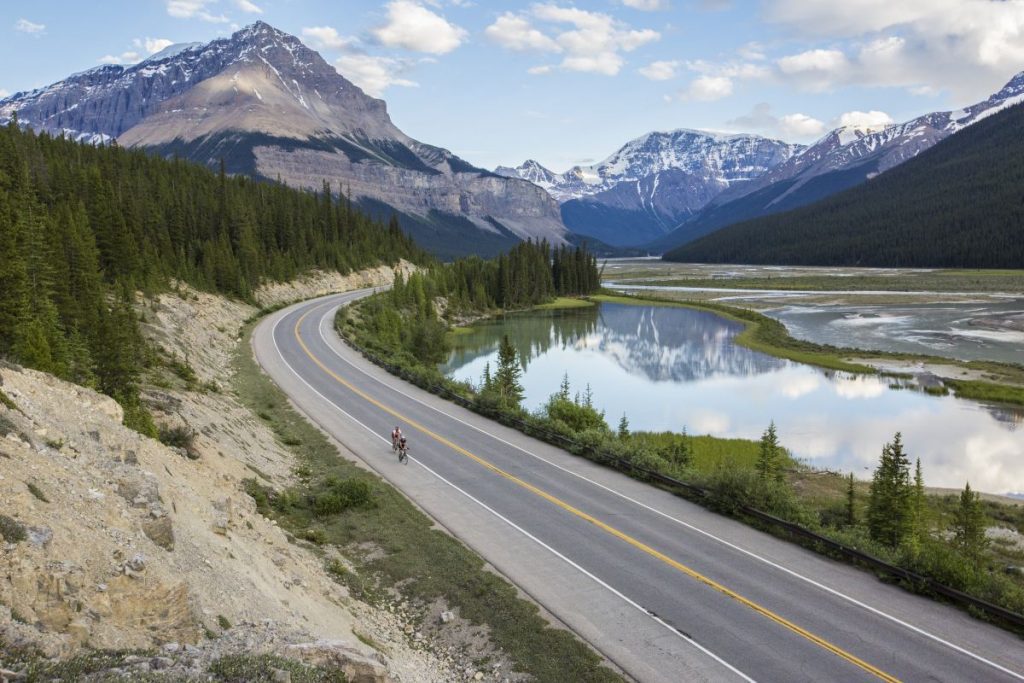 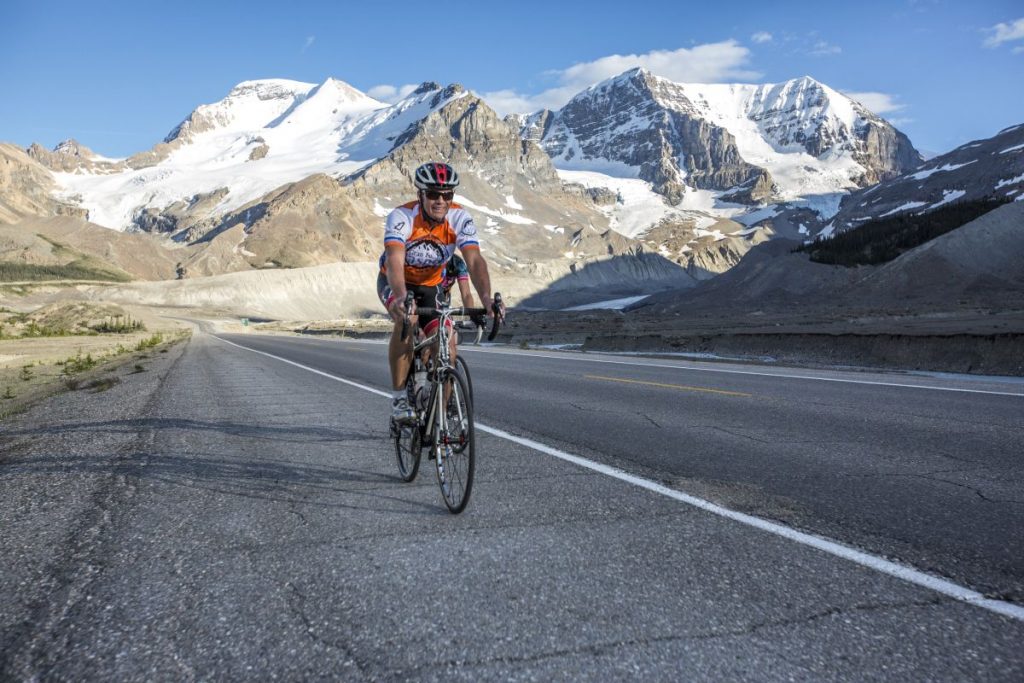 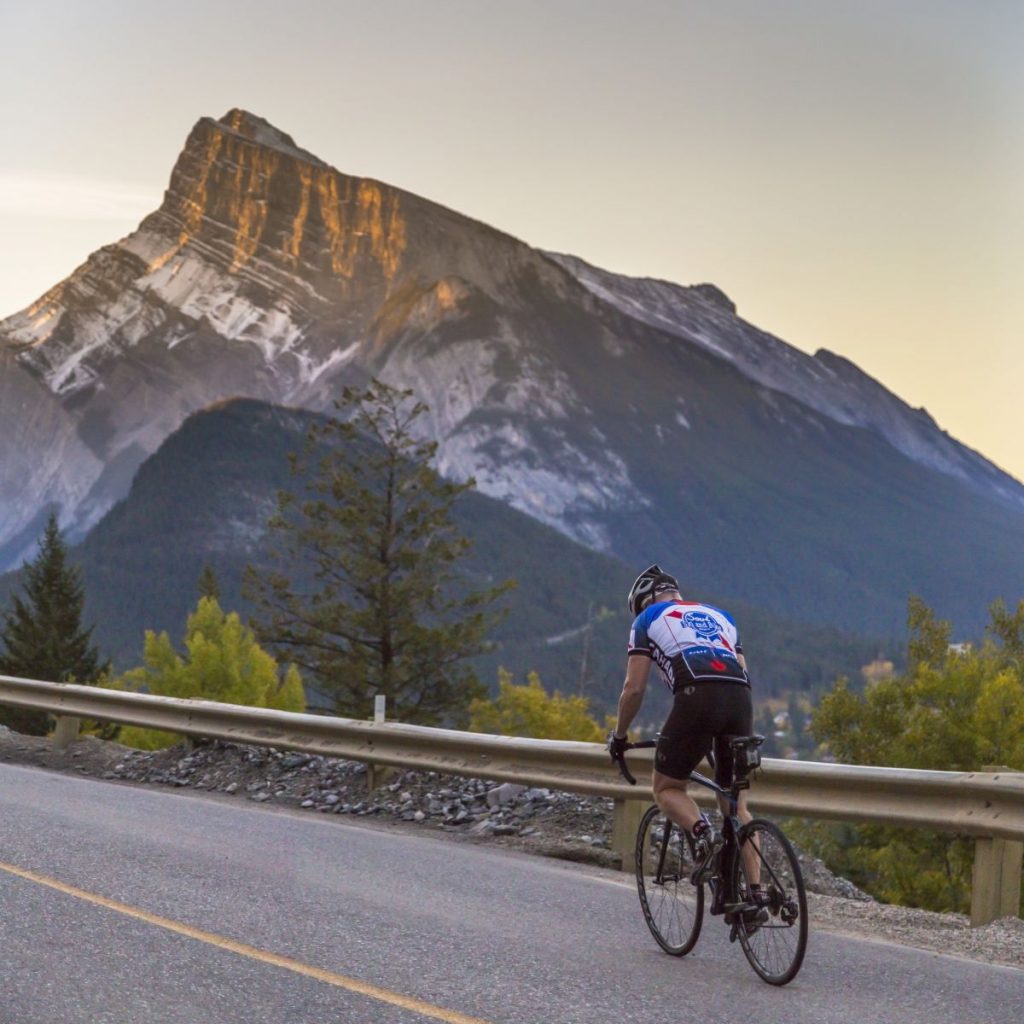 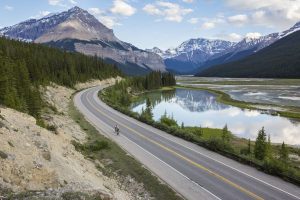 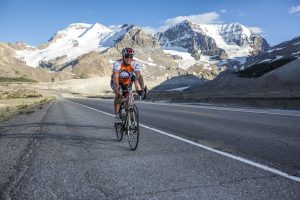 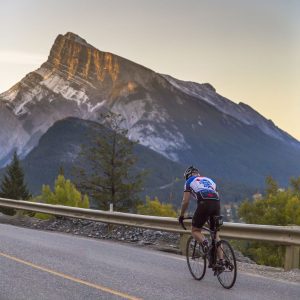 Jasper, Alta., claims some of Canada’s best road riding. But, it wasn’t until 2015, and then again in 2017, when the Tour of Alberta featured it on its queen stages that Jasper was placed clearly on the national radar. Each 162-km stage included a three-lap circuit along the Icefields Parkway and 93A roads before turning up the gruelling 12.9 km Marmot Basin Hill Climb. Surprisingly enough, locals are quick to say that it’s the nearby Edith Cavell Road rather than the Marmot Basin road that is Jasper’s best road ride.

Surprisingly enough, locals are quick to say that it’s the nearby Edith Cavell Road rather than the Marmot Basin road that is Jasper’s best road ride.

“The Edith Cavell Road was my first true road ride,” says Laura Dzikowski of Jasper, “and it made me fall in love with the sport. It’s a magical climb that winds uphill from the Athabasca Valley to stunning views of Mount Edith Cavell and the Angel Glacier.”

The complete climb begins as cyclists turn off the Icefields Parkway onto Highway 93A and head south. Ignoring the turnoff to Marmot Basin (2.4 km), cyclists gain 165 m over
5.2 km before turning onto the Edith Cavell Road, where the beauty of this climb begins.

“Since it is recently repaved, it’s the best road surface in Jasper,” Dzikowski says, “and it’s closed to vehicle traffic until June 15, so cyclists have it to themselves. The return trip, flying down the road following the yellow line around twists and turns without fear of oncoming traffic, is what makes me return to the road each spring.” 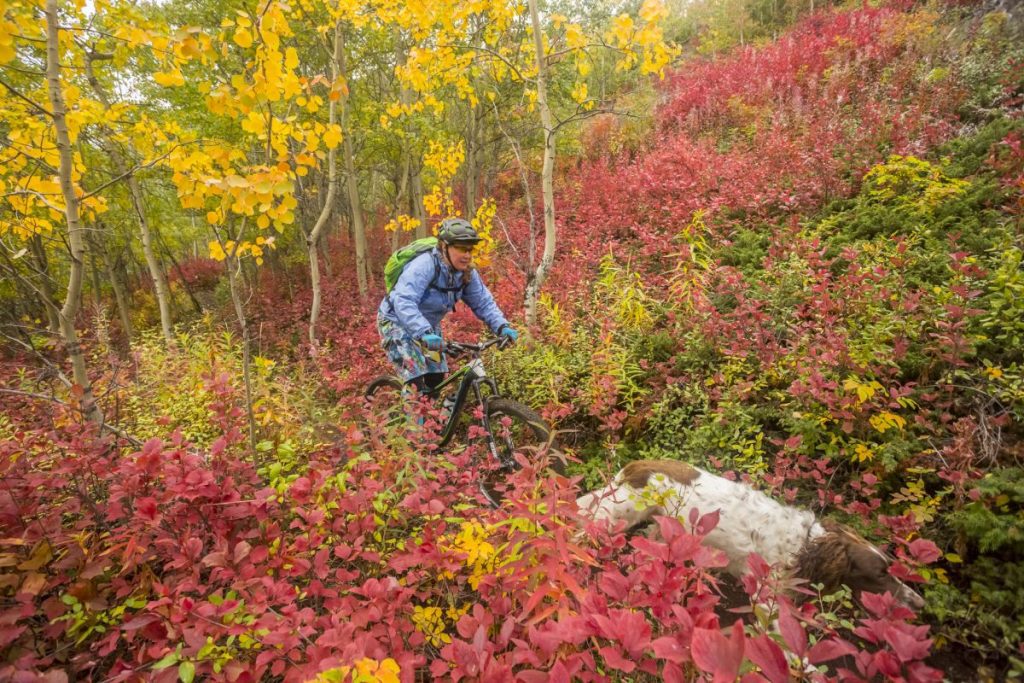 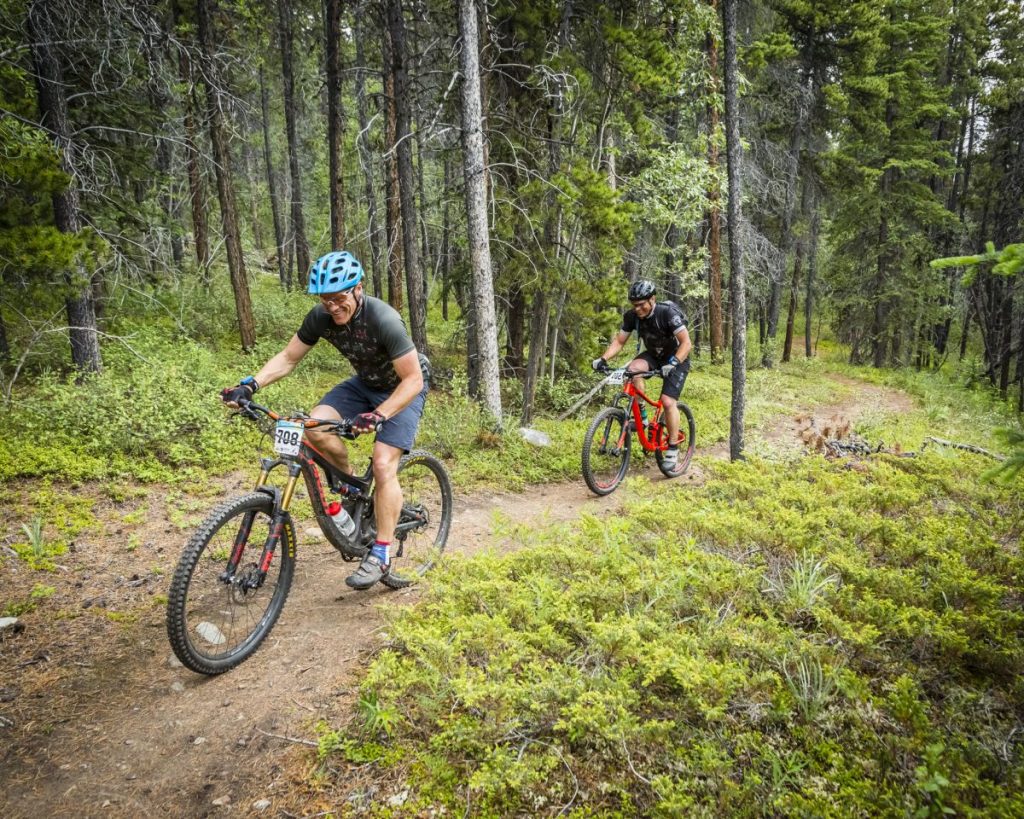 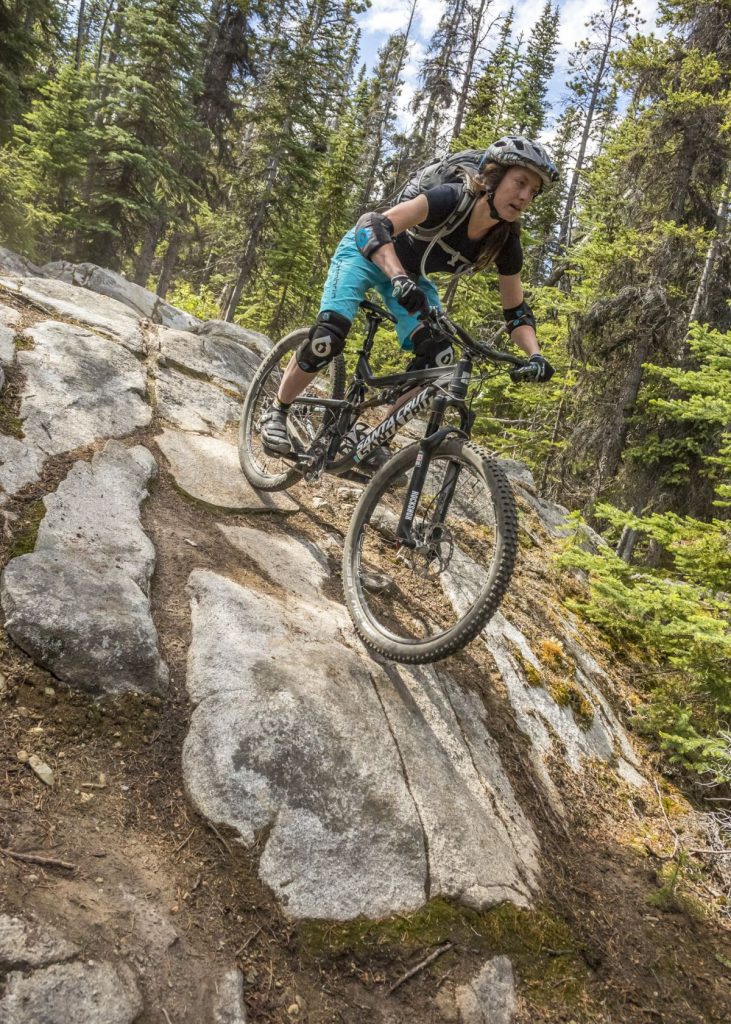 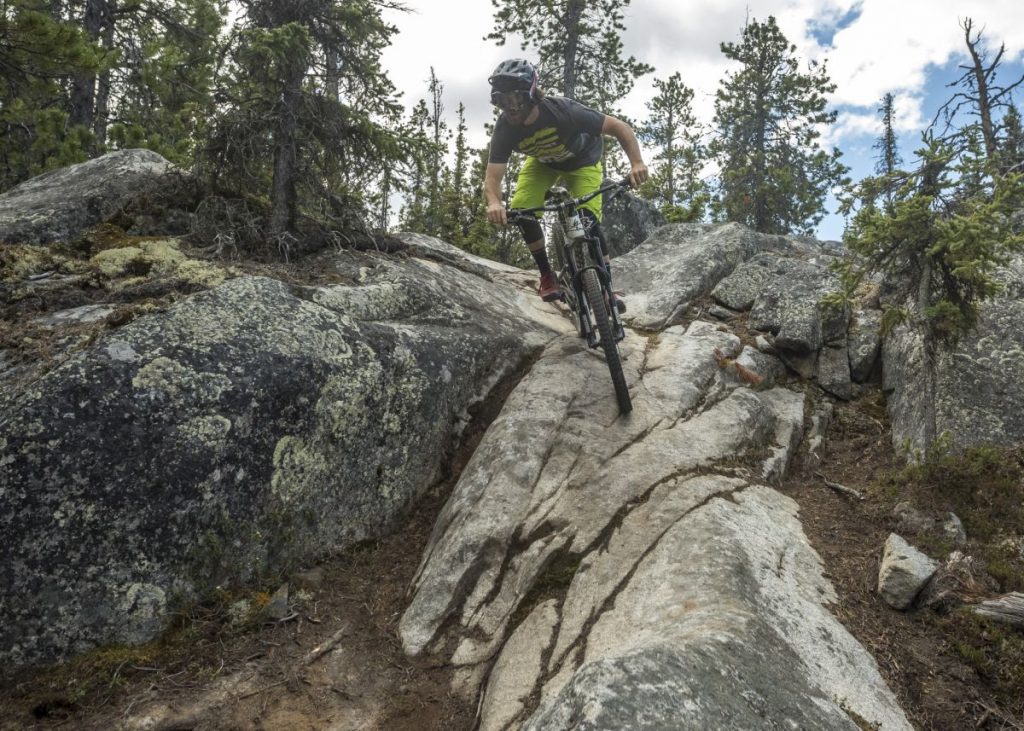 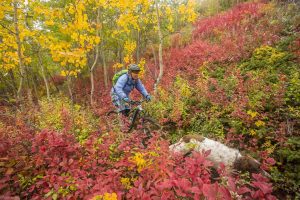 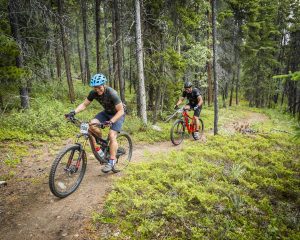 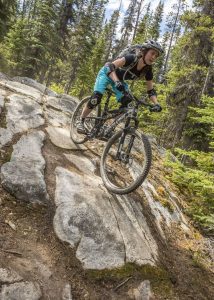 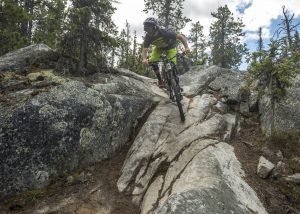 Mountain Hero packs much of Yukon’s history, culture, and wildlife into a strenuous yet rewarding ride on Montana Mountain, which lies 72.5 km south of Whitehorse in Carcross, Yukon.

“The mountain bike development on Montana Mountain has been a really positive experience,” says Sammy Salter, president of the Contagious Mountain Bike Club in Whitehorse. “The Singletrack to Success program has really helped local Carcross/Tagish First Nations youth reconnect to a landscape that holds such spiritual value for its people. It’s a privilege that we’re allowed to bike in that area.”

Mountain Hero begins with a challenging climb along old mining roads toward Montana Mountain’s summit. Old mining ruins from the silver boom, which came just after the Klondike Gold Rush, lie along the climb. As the trail enters the subalpine environment, stunning views of the Yukon landscape stretch in all directions. It’s possible to spot caribou along this section, as well as the occasional grizzly bear, so riders are encouraged to carry bear spray.

“The descent is called the Sam McGee Trail,” says Salter. “It’s a fast and flowy downhill that goes from this stunning alpine meadow down into a beautiful boreal forest. The tricky part is getting back, but lots of people either leave a shuttle vehicle at the end or ride the road back to Carcross.”