MS Bike is back. After two-years, when it had pivoted to a virtual format, MS Bike returns with riders gathering in various locations across Canada to ride together, and to raise funds and awareness for multiple sclerosis (MS).

MS is a chronic autoimmune disease. It can affect the central nervous system—the brain, optic nerves and spinal cord, which can result in a loss of memory, vision mobility and balance for those affected by it..

The goal for this year’s MS Bike is to raise $4.5 million, which will go a long way in helping new advancements in research, creating awareness around MS and help those who are affected by MS. The funds will be raised by more than 2,000 cyclists.

Each of these riders has a different story, but all of them are bound by one common theme; to help raise funds and awareness for MS. Many of them know someone who has MS, or they themselves may have the disease.

Here are three riders who will ride this year, and their inspiring stories.

Hicham Mourad and the ride to the St. Lawrence

Hicham Mourad has ridden MS Bike twice, in 2020 and 2021. This year will mark the first time he does “the real thing.” Along with his Spin Cycle team, he rode the route from Ottawa to Cornwall route in 2021, which this year becomes Ottawa to Brockville. Although he had good company in the previous two years—in some very strange times for all of us—he is very much looking forward to riding with hundreds of other cyclists. “I’m pretty excited,” Mourad says. “I’ve done other activities in the past, but this year’s ride from Ottawa to Brockville will be pretty special.” 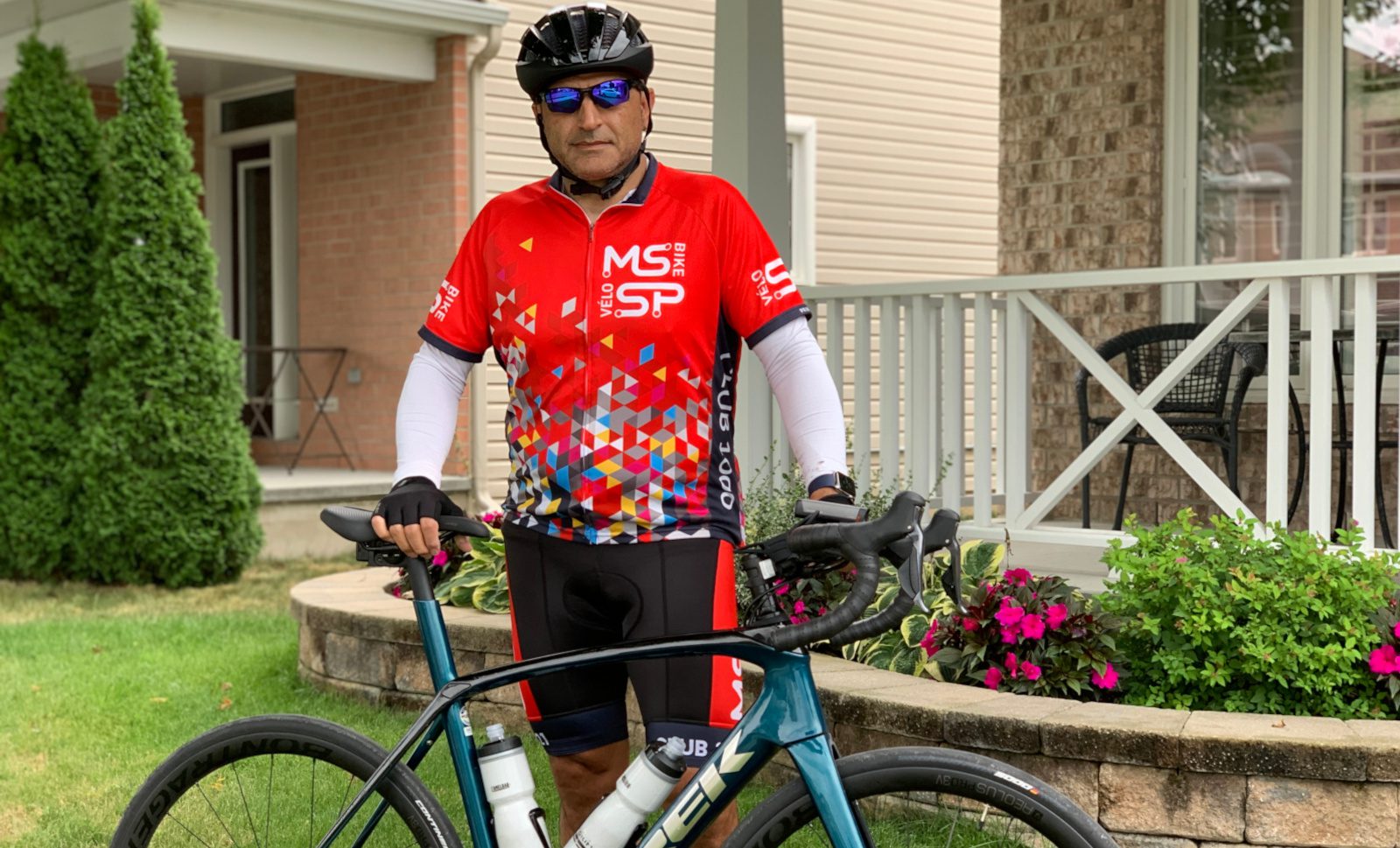 His motivation for joining the ride in 2020 was clear. “I wanted to ride with friends for a good cause, generating funds for MS and people living with it,” he explains. “I was really happy to be able to do that. As I started doing it, I was able to reach a lot of people who also had family members impacted with MS. As you start to talk to more people and bring awareness, you’ll find more and more people who are willing to help out with donations and encouragement.”

Since he and his team will tackle the 100-km route, he knew he had to train for it. Throughout the winter, he’s been riding inside and started riding outside once the weather got better. “It’s not hard to motivate yourself for this ride because you know the importance of it,” he says. “I am really looking forward to the actual event. I’ve heard such great things about it; the organization and logistics are really great, I’m told.”

Marcel LaFontaine is the Spin Cycle captain, and the team’s vet of the ride, having done it since 2017. Since he’s the team leader, he’s been in contact with his riders throughout the winter as the event gets closer. He started participating in MS Bike rides after his brother-in-law mentioned it to him once. Like so many Canadians, LaFontaine has family members who have had MS.

This year’s ride will be particularly special, given the difficult past few years filled with uncertainty. “I am so excited to show my team the actual event,” LaFontaine says. “We did it ourselves the past few years, and we had a great time. I knew the route like the back of my hand, so I was the tour guide. I’m really looking forward to it.”

The fact that they were riding it themselves was a big selling point for donors. “People were impressed with us that we were going ahead and riding the route anyway, even though it was just us four.” he says. “People were so generous; we were so blessed to get so many donations.” 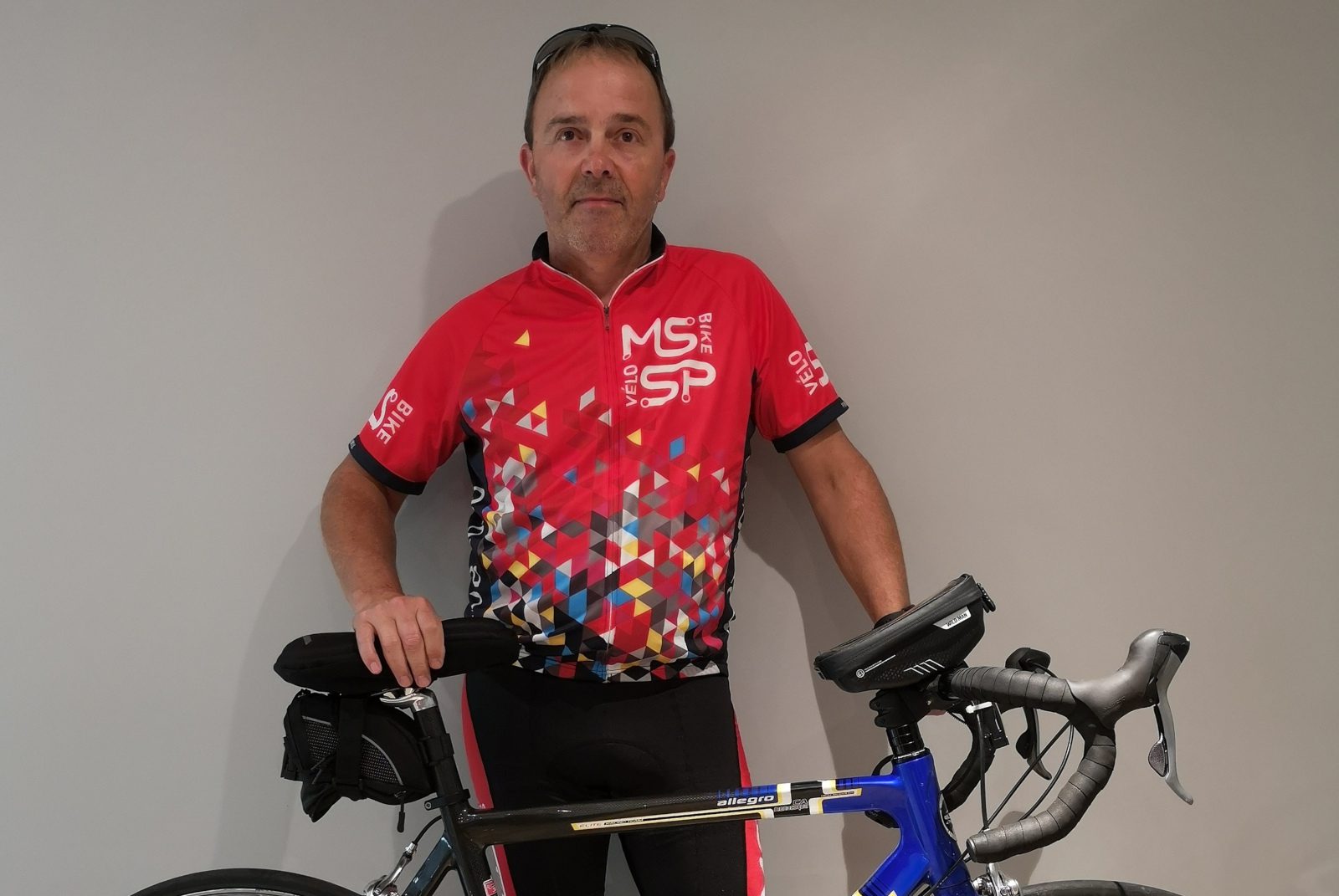 The Spin Cycle team tries to ride as much as possible, getting together when they can. They also make sure to ride on Zwift together for virtual rides.

“It will be great to get back to normal, doing this very special event,” LaFontaine says. “I’ve done many charity rides, but I truly believe the MS Bike ride is a notch above. I know this ride will be just as good as before the pandemic, if not better.”

Martine St-Jean’s motivation is quite personal: she herself has MS. Although she doesn’t have the debilitating form, she knows how important the ride is for her and others managing the disease. “I feel fortunate that I haven’t had a relapse since my diagnosis. I don’t really feel disabled; I can function,” she says.

She initially joined the MS events with the walks, before moving onto the bike version. “A friend told me about the bike ride, and then I joined the Spin Cycle group in 2020,” St-Jean says.

When the team did the self-guided version of the ride, there were snags. Because of COVID-19 restrictions, they had to do careful planning for stops. “Marcel had done it so many times, it was a good thing he knew the route so well. He organized all the stops. Otherwise we may not have been able to find bathrooms that were open,” she says.

Their 2020 and 2021 rides were both memorable. LaFontaine gave them many tips throughout and had mapped everything well. “Doing the Ottawa-Cornwall was so great. Lots of countryside, and traffic was not an issue. The last part of it on the parkway into Cornwall was amazing, such a beautiful view,” she says.

St-Jean rode when she was younger, but after moving to the country and starting a family, her time on the bike waned. She picked it up again to get in shape. “That’s when I got hooked on long rides. I really love cycling, and I ride three to four days a week, and Zwift in the winter,” she says.

The MS Bike ride is more than just cycling, given all the people who come together. “I am excited for the social part,” St-Jean says. “The energy of the big group is a motivation. I am looking forward to meeting new people and sharing the experience.

“I work in research,” she adds, “and I know how integral fundraising and awareness is for groups like the MS Society. MS has no cure, which is what makes this ride so important.”

This article is presented by MS Bike